By Leigh Mcmanus For Mailonline

A Government watchdog has warned homeopaths that they must stop practising so-called treatments for autism, but the NHS director wants the ‘quack’ practitioners struck off completely.

The Society of Homeopaths have been given a three month deadline to withdraw advertising for bogus ‘cures’ for autism.

The Professional Standards Authority today said it would only renew the societies accreditation on those grounds.

However, NHS national medical director Stephen Powis has urged for a blanket ban on the practitioners – who have a reputation for offering debunked ‘alternative’ treatments.

Last year, the PSA faced criticism for accrediting The Society of Homeopaths for a fifth year running, despite some of its members practising CEASE therapy.

The Good Thinking Society, a charity that promotes rational scepticism, said the PSA – which oversees medical organisations – had failed to safeguard the welfare of autistic children.

The High Court gave the green light for a judicial review of the decision, with a decision due to be heard on March 18.

PSA said today it would once more renew the accreditation for 2020 – subject to the condition it stops offering and advertising CEASE therapy. 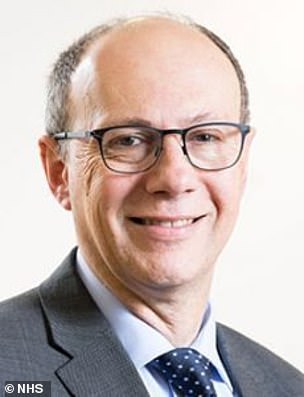 CEASE relies on the false notion that autism is caused by vaccines, and supposedly involves the removal of ‘toxic imprints’ in a child through vitamin C and zinc supplements, among other unproven fixes.

Experts stress autism is not a ‘disease’ that is caused by environment substances, medicine or vaccines, and that CEASE – which stands for Complete Elimination of Autistic Spectrum Expression – has no scientific credibility.

The foundations of CEASE also suggests protecting children from autism by avoiding microwaves, antibiotics and bread.

Such bogus information is at the forefront of public health bodies’ concerns, alongside rife myths about the unproven dangers of vaccinations.

‘Specific reference must be made to the society’s position forbidding the practice of CEASE and dietary/nutritional supplements,’ a statement from the PSA said.

He said: ‘Taking homeopathic remedies, instead of evidence-based, effective and scientific advice – particularly on lifesaving interventions like measles vaccines – risks sending well-meaning parents down a path that puts them and their children at great risk.

‘It’s absolutely right that homeopaths should be banned from advertising quack remedies for autism, but frankly this is not enough and they should not be issuing medical advice, full stop.’

As well as forbidding the use of the therapy, the PSA said that homeopaths should stop suggesting homeopathy is a substitute for vaccines – and should instead refer all people to the NHS.

A 2010 House of Commons Science and Technology Committee report on homeopathy said that homeopathic remedies perform no better than placebo, also saying that the principles on which the practice is based are ‘scientifically implausible’.

And in October 2018 Yale University researchers actually found that people who use homeopathy as part of their cancer treatment are, on average, twice as likely to die from the disease as those who use conventional treatment alone.

WHAT IS AUTISM AND WHAT IS THE CAUSE?

Autism is a lifelong developmental disability that affects how people perceive the world and interact with others.

Autism is a spectrum condition meaning people are affected in different ways, although share some difficulties.

The causes of autism are still being investigated.

Many experts believe that the pattern of behaviour from which autism is diagnosed may not result from a single cause.

There is strong evidence to suggest that autism can be caused by a variety of physical factors, all of which affect brain development.

There is evidence to suggest that genetic factors are responsible for some forms of autism.

Scientists have been attempting to identify which genes might be implicated in autism for some years.

Autism is likely to have multiple genes responsible rather than a single gene. The difficulty of establishing gene involvement is compounded by the interaction of genes and by their interaction with environmental factors.

For these reasons genetic testing to diagnose a pre-disposition to an autistic spectrum disorder is not, at present, possible.

In the past, a number of things were linked to the cause of autism, but extensive research has found no evidence to support them.

These include the measles (MMR) vaccine, thiomersal – a mercury compound used as a preservative in some vaccines, the way a person has been brought up, diet, pollution, emotional deprivation or maternal infections in pregnancy.

In 1995, gastroenterologist Andrew Wakefield published a study in The Lancet showing children who had been vaccinated against MMR were more likely to have bowel disease and autism.

He speculated that being injected with a ‘dead’ form of the measles virus via vaccination causes disruption to intestinal tissue, leading to both of the disorders.

After a 1998 paper further confirmed this finding, Wakefield said: ‘The risk of this particular syndrome [what Wakefield termed ‘autistic enterocolitis’] developing is related to the combined vaccine, the MMR, rather than the single vaccines.’

At the time, Wakefield had a patent for single measles, mumps and rubella vaccines, and was therefore accused of having a conflict of interest.

Nonetheless, MMR vaccination rates in the US and the UK plummeted, until, in 2004, the editor of The Lancet Dr Richard Horton described Wakefield’s research as ‘fundamentally flawed’, adding he was paid by a group pursuing lawsuits against vaccine manufacturers.

On January 6 2011, The British Medical Journal published a report showing that of the 12 children included in Wakefield’s 1995 study, at most two had autistic symptoms post vaccination, rather than the eight he claimed.

At least two of the children also had developmental delays before they were vaccinated, yet Wakefield’s paper claimed they were all ‘previously normal’.

Further findings revealed none of the children had autism, non-specific colitis or symptoms within days of receiving the MMR vaccine, yet the study claimed six of the participants suffered all three.