Boy, four, gets his left HAND reattached in painstaking six-hour operation after slicing it off with a lawn mower

A four-year-old boy had his whole hand reattached after slicing it off with his father’s lawn mower.

Shaurya Undre amputated his left hand in an agonising accident, but x-rays showed most of the wrist bone remained.

At hospital near his home in Manjri, India, surgeons were keen to give him the best chance because he was so young.

They stitched every nerve and blood vessel back into place under a microscope during a painstaking six-hour operation.

Pictures show Shaurya smiling after the procedure, and he has been able to wiggle his fingers since, local media report. 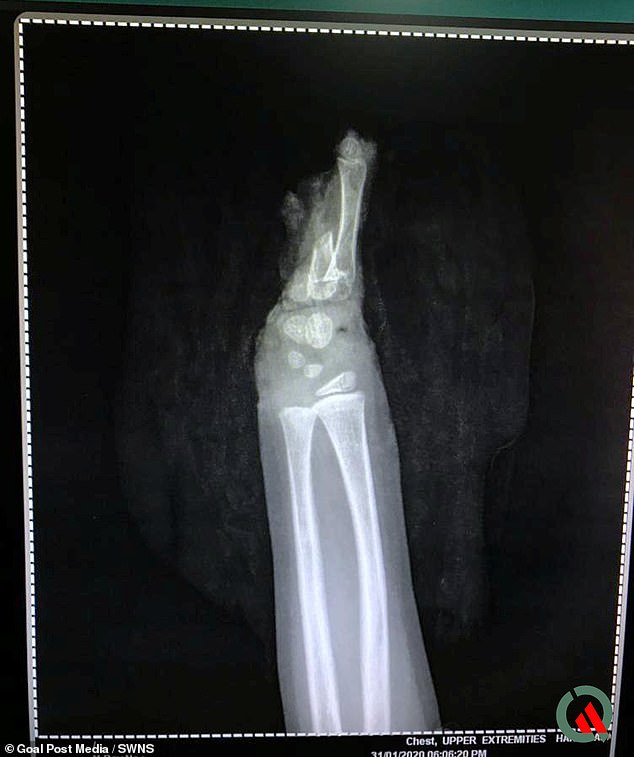 Shaurya amputated his left hand on January 31 when he was playing with his father Mukesh’s grass cutting machine.

He was taken five miles from his home to Noble Hospital, where specialist micro-vascular surgeon Dr Abhishek Ghosh treated him.

He said: ‘Seeing the young age of the child it was decided to attempt to salvage the hand.

‘The patient was taken up for surgery immediately and given anaesthesia.’

Part of Shaurya’s bone was still attached to his body, while the hand skin and muscle had been cut off.

Medics looked at his amputated hand closely and found they could reattach some of the blood vessels.

They used skin and vein grafts from his leg to patch the amputated hand and his wrist back together. 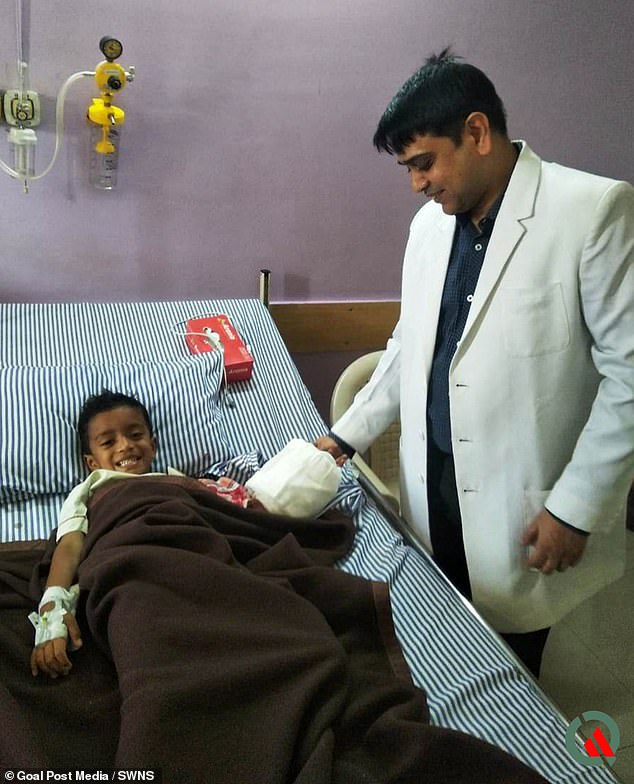 Dr Abhishek Ghosh treated Shaurya at Noble Hospital in Manjri, India. He said: ‘Seeing the young age of the child it was decided to attempt to salvage the hand’ 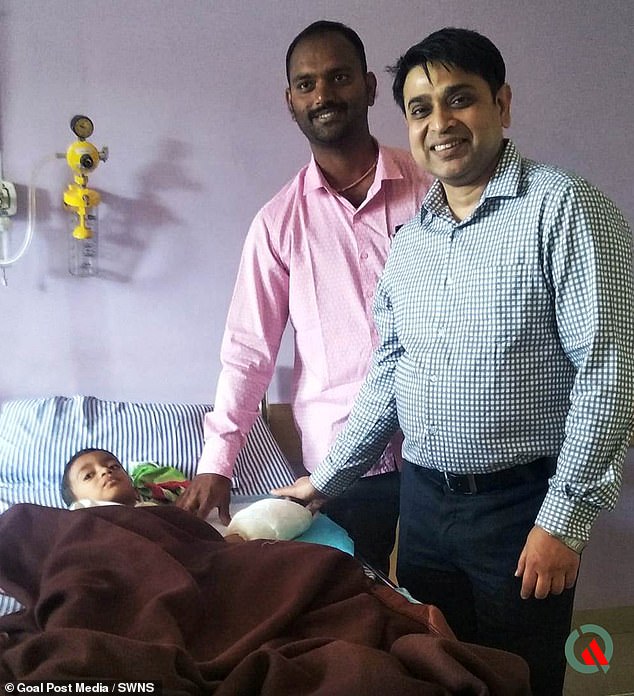 Dr Ghosh and his team used skin and vein grafts from his leg to patch the amputated hand and the wrist back together. Pictured, Shaurya after the operation with his father, Mukesh 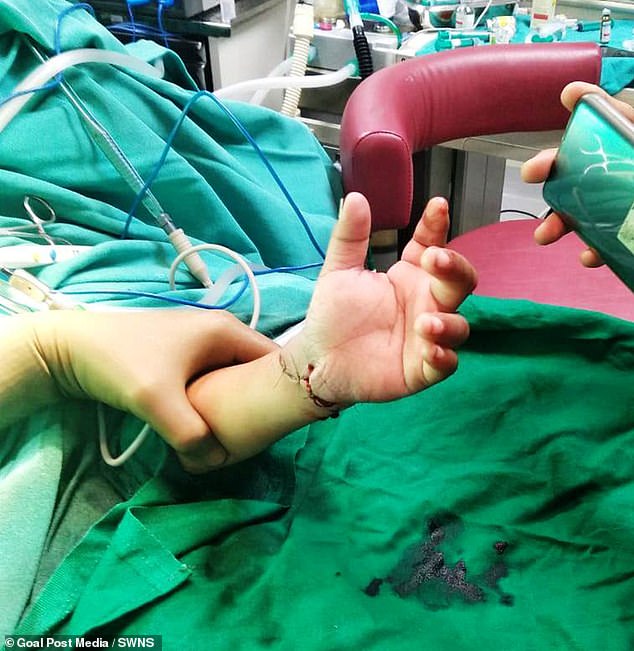 Shaurya’s hand muscle and skin had become detached in the accident. It is pictured after being sewn back on by medics

Dr Ghosh said: ‘His left hand was completely avulsed with part of the bones attached to the body while the hand skin and muscle got detached.

‘It was very difficult to rejoin the hand because all the muscle, blood vessels and soft tissue of the palm were torn off and there was no blood vessel which could be connected.

‘The amputated hand was closely observed under the microscope and a small blood vessel inside the muscle was noticed.

‘This tiny blood vessel was then joined to the main artery of the forearm with the help of a long vein graft taken from the leg.’

Once circulation to the amputated hand began again, the medics had to join the rest of the blood vessels using microsurgery.

The delicate work took around six hours and can only be done by specialists in the field.

The operation took six hours and Shaurya stayed in hospital for a week to recover. He will be given physiotherapy to help him learn how to use his hand again.

Doctors performed an extraordinary operation in 2015 to save a man’s severed hand by attaching it to his leg.

The man’s hand was successfully grafted back on to his wrists after a month, when the nerves and tendons had healed from the trauma.

The rare operation was performed at a hospital in Changsha, the capital of Hunan Province in central China. 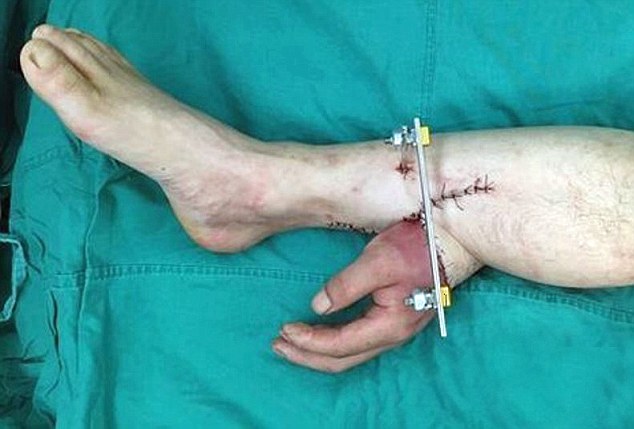 A man whose left hand was severed in a work accident had it attached to his leg for a month. This was done to provide the hand with a flow of blood to keep it alive until the nerves and tendons in his wrists healed

It happened after a factory worker called Zhou had his left hand chopped off during a work accident involving a spinning blade machine.

He was rushed to the Xiangya Hospital in Changsha where doctors assessed his situation.

Dr Tang Juyu, head of microsurgery at the hospital, decided he could give Zhou a chance to ‘revive’ his lost hand – with an operation he and his team had already successfully performed once in 2013 under similar circumstances.

Because both Zhou’s arm and severed hand were badly wounded following the accident, doctors were unable to attach it right away, opting instead to allow the nerves and tendons to heal with time.

This meant Dr Tang and his team decided to graft Zhou’s left hand to his right ankle.

Mr Zhou’s hand was kept ‘alive’ and left to heal while attached to his ankle for more than one month.

Then Dr Tang and his team have now successfully reattached it to his arm in a 10-hour surgery.