A grandfather who had dry skin on his bald head for years was shocked to be diagnosed with skin cancer.

Peter Wilson, 68, from Melbourne, Australia, had always had rough skin on his scalp and never thought much of it.

But some patches became progressively more ‘angry’, and one particular inch red spot remained on his scalp for several months.

The IT consultant downloaded the app SkinVision which helps identify potential risks of skin cancer from a photo. It suggested he see a doctor immediately, which led to a referral to a dermatologist in August 2019.

Skin biopsies came back positive for squamous cell carcinoma, a common type of skin cancer which appears as a scaly or crusty raised area of skin.

Mr Wilson had surgery to remove a two-inch patch of cancerous skin from his scalp, which was covered with a skin graft from his right thigh.

Despite delaying seeing a doctor, his skin cancer was caught early and didn’t spread to rest of this body.

He is now urging others to wear skin protection, admitting he was ‘blasé’ about doing so under the Australian sun for hours every day.

Peter Wilson, 68, from Melbourne, Australia, didn’t think much of the patches on his head. He was shocked to discover he had skin cancer 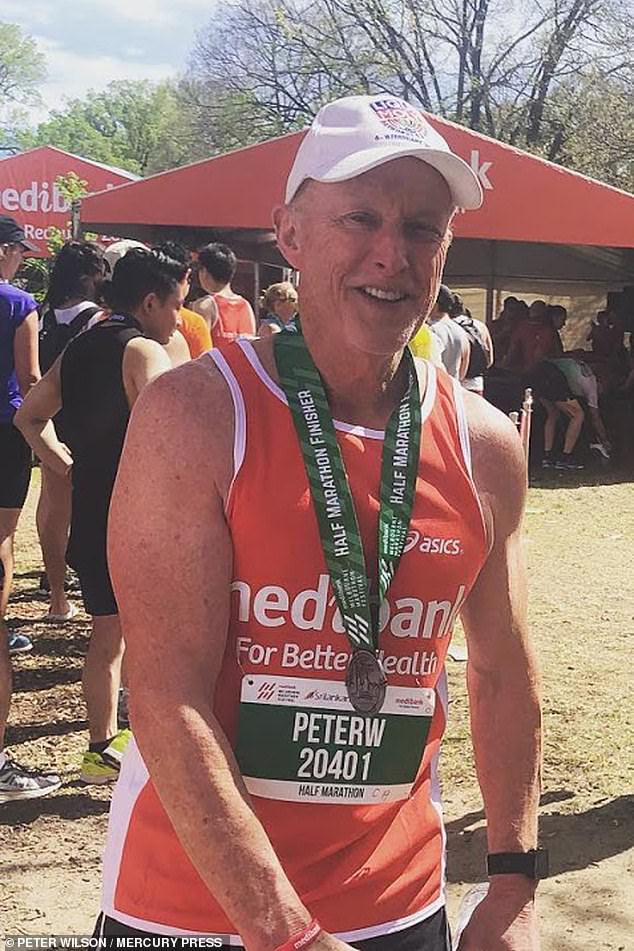 Mr Wilson, who has no history of skin cancer in his family, said: ‘It was more than a shock – I’m a very active person and had to stop running… I really missed it’ 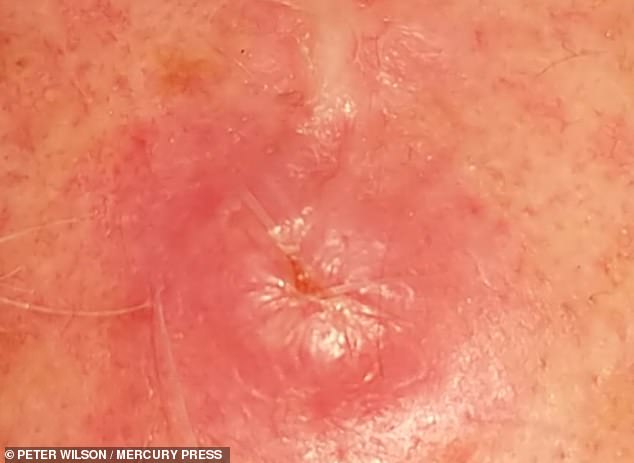 Mr Wilson had squamous cell carcinoma, a common type of skin cancer which appears as a scaly or crusty raised area of skin (pictured)

Grandfather-of-one Mr Wilson said: ‘Over a number of years I spotted some dry patches on my head and some blotches.

‘My skin has always been dry but these spots were a bit more red and angry.

‘The patches were more inflamed and didn’t go away – but I didn’t think much of it.

‘I did some research online and came across the SkinVision app and scanned the spots on my head.

‘They advised me to see a specialist, but that was something I put off for a while – my wife Isobel, 67, is a nurse and urged me to go to the doctors about it.’

A dermatologist took a couple of biopsies from the scalp and the cheek. They also scanned the rest of Mr Wilson’s body for any other potential spots.

Mr Wilson said: ‘The biopsies came back positive for skin cancer and I was booked in for an appointment to remove this infected skin.

‘It was more than a shock – I’m a very active person and had to stop running and going to the gym for two months after surgery, I really missed it.

‘My kids were shocked and more than a little anxious and my extended family were horrified when they found out I had skin cancer.’

Squamous cell carcinoma (SCC) is the second most common type of skin cancer in the UK, after melanoma, affecting around 23,000 a year.

Non-melanoma affects an estimated three million Americans a year, and approximately two in three Australians will be diagnosed with skin cancer by the time they are 70, according to Cancer Council.

SCCs most usually appear as a scaly or crusty raised area of skin with a red, inflamed base on the head, ears, neck and back of the hands.

They are caused by changes in the DNA cells, such as a burn, which can grow rapidly if untreated.

The vast majority of SCCs are low risk skin cancers and can be cured. A small number can recur locally, or spread to other parts of the body. 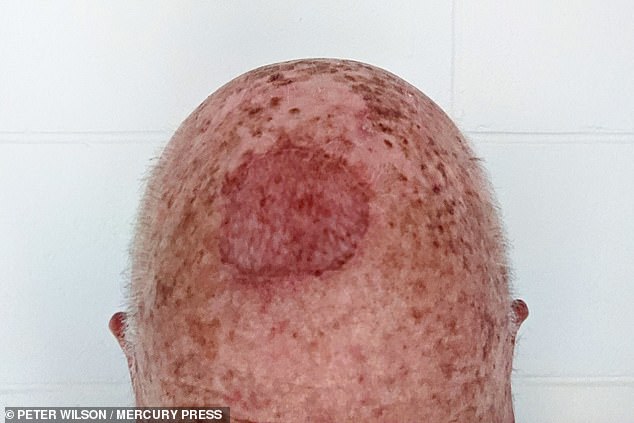 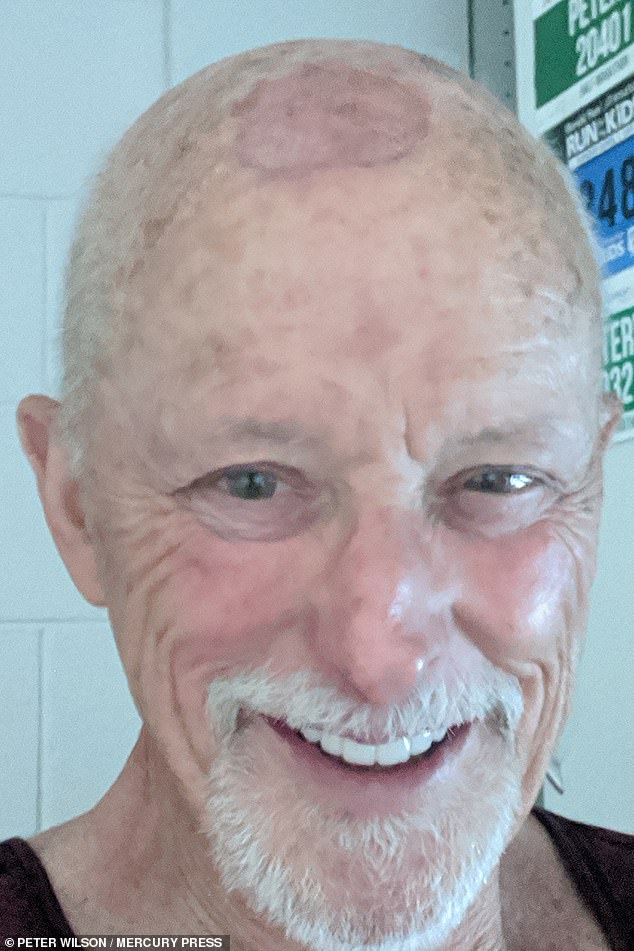 Mr Wilson, pictured with a healed head, is now urging others to wear skin protection, admitting he was ‘blasé’ about doing so under the Australian sun for hours every day

SkinVision is a mobile phone app that assesses a user’s skin cancer risk by analysing their moles.

After downloading the app, which costs £4.49 for a single use and £26.99 for unlimited checks for a year, it asks questions about the user’s skin type, ranging from very fair to dark brown.

The user then takes three pictures of each of their chosen moles on their phone.

These images are run through an algorithm that assesses factors such as asymmetry and shape.

An assessment is made within 30 seconds, with ‘all clear’ requiring no action, ‘medium risk’ meaning the mole needs monitoring and ‘high risk’ requiring the user visits a doctor.

If a user gets a high-risk rating, an in-house dermatologist provides a free review within two days to explain why there is a cause for concern.

These images are then added to the algorithm, which contains more than three million pictures, to improve its accuracy.

The app, which is available globally aside from the US and Canada, also sends reminders for users to visit a doctor, if necessary.

A study completed by SkinVision found the app has greater than 95 per cent sensitivity.

Surgeons took a skin graft from his right thigh and expanded it to cover the patch on his scalp. Forty staples attached the graft and dressings.

A further 20 staples were used to hold a dressing down to his thigh wound.

Mr Wilson, who has no history of skin cancer in his family, said: ‘Recovery was quick but very uncomfortable because of the staples and I had to change the dressings on my head and leg often.

‘The staples all had to come out one at a time, which was quite a painful experience.

‘The worst part was the skin graft – I had a bit of a bleed with the dressing on my thigh, so peeling that off was excruciating.’

Luckily, prior to the operation Mr Wilson was told the cancer had been caught early enough and wasn’t particularly aggressive.

However, it had the potential to spread through the dermis – the tissue underlying the skin – in the affected area.

If left unchecked, it could eventually spread further in his body, so the surgeon’s strategy was to remove enough of the area to prevent further damage.

Mr Wilson is now waiting to hear back from his dermatologist whether he is at risk of developing further cases of skin cancer, and he’s urging others to be wary of suspicious looking patches of skin.

Mr Wilson said: ‘Back in the 70s and 80s when I was young, there wasn’t much information about sun protection. 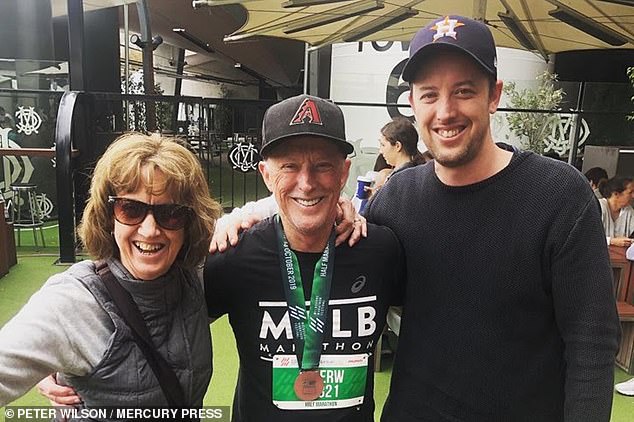 Mr Wilson said the SkinVision app advised him to see a specialist, but he put it off for a while. His wife, Isobel, 67, urged him to go to the doctors about it. They are pictured with their son 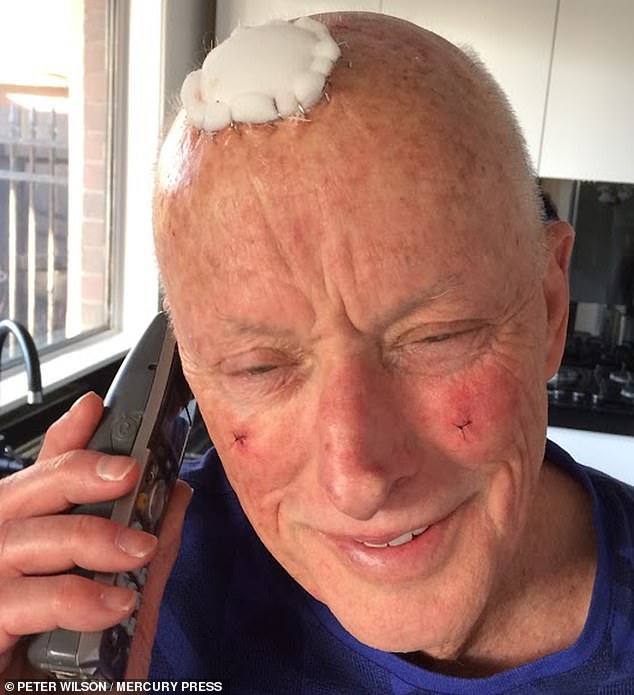 Mr Wilson, pictured after surgery with a dressing on his scalp and wounds from where his biopsies were taken, is now waiting to hear back from his dermatologist whether he is at risk of developing further cases of skin cancer

‘Everyone just knew that if you stayed in the sun too long, you would get sunburnt. And we often got burnt while we were at the beach, swimming and surfing.

‘When I was at university, I used to work over the Christmas break carting hay for a contractor. I would spend about 14 to 15 hours exposed to the sun while working every day and I only wore boots, jeans and a singlet.

‘The effects of the sun back then weren’t as bad as they are today, now that the ozone layer has been damaged over Australia.

‘I used to be pretty blasé about the sun but now I wear a hat all the time and put sunscreen on any exposed skin.’

Between 95 and 99 per cent of skin cancers in Australia are caused by exposure to the sun, and are therefore preventable, Cancer Council reports.

Mr Wilson said: ‘The fact of the matter is, the sun nowadays is fairly dangerous to skin – you’ve got to be crazy if you don’t use protection.

‘You really can’t afford to be blasé about the sun, you have to protect your skin in summer and winter.

‘Cancer is a horrible thing and [if you’re not careful] you’re at risk of dying.

‘Another warning to people is to get these suspicious things looked at early before they escalate.’

Mr Wilson praised SkinVision for prompting him to see the doctor with its quick skin analysis using a photo.

He said: ‘I was impressed by the SkinVision app and I am sure it will develop into an incredibly important tool – it saved my life.

‘I’m glad I caught it early – you usually just think this is the kind of thing that only happens to other people.’

WHAT DO CANCEROUS MOLES LOOK LIKE? CHECKING IS AS EASY AS ABCDE

The more moles someone has, the higher their risk of developing melanoma.

The following ABCDE guidance can help people identify moles that might need looking over by a doctor.

Look out for moles with an irregular shape. 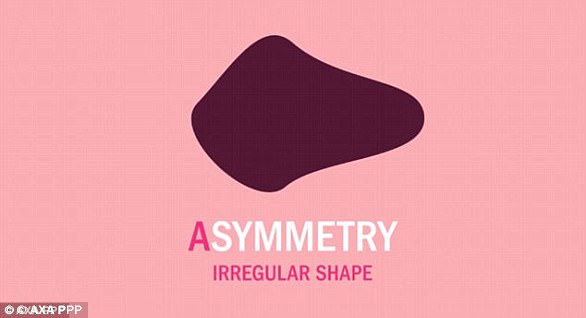 Check for asymmetrical moles that have an irregular shape 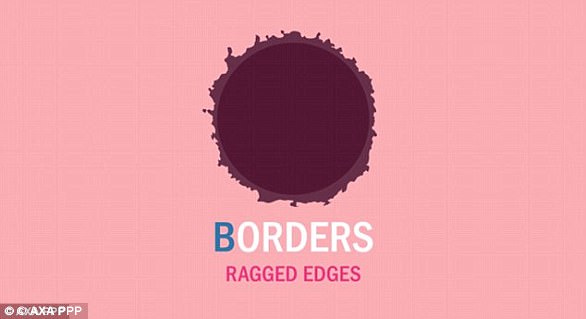 If a mole changes in colour or is a different colour in one part than in another, seek medical advice.

Any increase in size should be checked, but be particularly cautious of moles that grow more than around 6mm across. 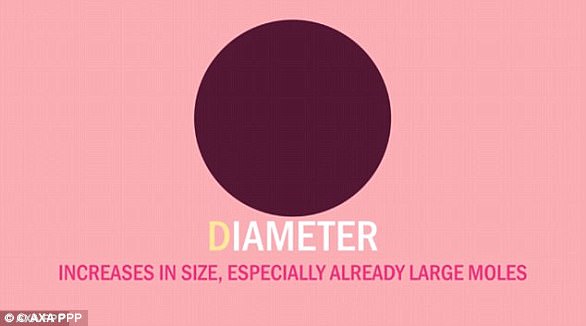 Any change in size should be checked, but more than 6mm across is very concerning

The E section is generally classed as ‘elevation’; warning you to watch out for moles that are raised from the surface, particularly if this is irregular.

Yet, Dr David Fisher, director of the melanoma program at Massachusetts General Hospital, explains many dermatologists have different classifications for this.

His preferred word is ‘evolving’.

Dr Fisher previously told MailOnline: ‘Is it changing? Do you notice anything suspicious or concerning? That is key.’ 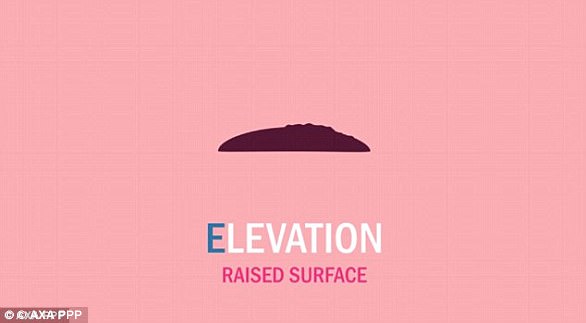