By Pat Hagan for the Daily Mail

A new drug could banish peanut allergies within weeks of being administered. In a trial, people who had been in danger of life-threatening reactions to traces of peanut could eat a whole one just a fortnight after an injection.

Scientists who developed the drug predict some patients may need only a single treatment to end the allergy altogether, while others may need a top-up jab every few months to keep it at bay.

Etokimab targets a part of the immune system involved in severe allergic responses. Researchers hope it may also work against other serious food allergies, such as milk and shellfish, as well as tree nuts.

About one in 100 people in the UK has a peanut allergy, and it typically begins before the age of two

About one in 100 people in the UK has a peanut allergy, and it typically begins before the age of two. When the immune system comes into contact with any peanut protein, it mistakenly treats it as a threat and releases a rush of chemicals including Immunoglobulin E, an antibody designed to rid the body of what it considers a dangerous invader.

Giving children antihistamines and probiotics when undergoing desensitisation to a peanut allergy can increase success rates, a review found.

Researchers at the University of Adelaide, in Australia, examined 27 studies involving 1,500 children and concluded the combination led to a 10 per cent increase in the number of patients able to tolerate the treatment.

In the journal Scientific Reports, the lead researcher said the ‘slight’ modification could ‘substantially’ improve the treatment’s safety, but it is not yet known why.

This triggers the symptoms of an allergic reaction, often within seconds. These range from an itchy mouth to anaphylactic shock — where the airways narrow, blood pressure plummets and major organs rapidly shut down.

Currently, the only treatment to ‘cure’ the allergy involves desensitisation, where patients under close medical supervision are fed gradually increasing quantities of peanut protein until their immune system has learned to stop overreacting to it.

But an estimated 15 per cent experience anaphylactic shock during the process. It can also take up to two years of hospital visits every few months, and only a handful of NHS centres offer the treatment.

The new jab seems to work in only two weeks in about two-thirds of patients.

Etokimab was initially developed to treat eczema, but clinical trials found it had no great benefit. Scientists also tested its effect on peanut allergy as it is known to interfere with the interleukin-33 molecule, which helps trigger the chemical rush that causes serious reactions.

Fifteen adults with severe peanut allergies were given one injection of etokimab, while five others were given a dummy jab. Two weeks later, all were asked to eat 275mg of peanut protein — the same amount that’s contained within a nut.

The results, published in the medical journal JCI Insight, showed 11 of the 15 on etokimab avoided a serious reaction, while all on the dummy drug needed adrenaline jabs.

The team, at Stanford University in California, is now planning larger studies with different food allergies.

Professor Adam Fox, a consultant in paediatric allergy at Evelina London Children’s Hospital, said: ‘This is exciting and credible research.’

The kitchen cupboard ‘cures’ that really do work. This week: Psoriasis

The skin condition psoriasis occurs when the turnover of skin cells malfunctions and new cells are produced more quickly than older ones are shed.

This leads to inflammation and a build-up of scaly patches, which can feel itchy and become sore.

Scratching can break the skin, but a treatment for the itchiness can be found in your kitchen fruit bowl — a banana peel. These are a source of salicylic acid, a natural peeling agent which helps your skin to shed its outer layer. 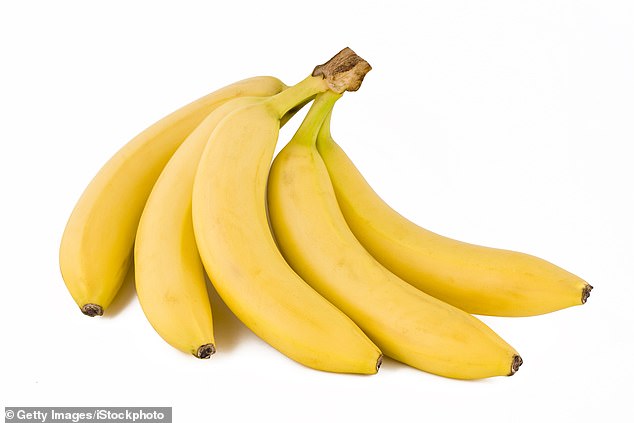 Banana peel is a source of salicylic acid, a natural peeling agent which helps your skin to shed its outer layer

‘You can use the inside of the banana skin to help remove the scale,’ says Dr Anthony Bewley, a consultant dermatologist at Barts Health NHS Trust in London.

‘It’s really safe and effective, and it will help relieve the itching of mild psoriasis.’

All you need to do is gently rub it over the affected area.

Medical breakthroughs that began on the battlefield. This week: Sanitary towels

As World War I started taking its brutal toll, a U.S. manufacturer of paper products came up with a new bandage that was five times more absorbent than ordinary cotton, and a lot cheaper to make.

The dressings were made of wood pulp and were hugely popular with doctors treating the wounded.

As the war drew to a close in 1918 and demand for bandages fell, the company began to receive letters from Army nurses saying that the dressings also made excellent sanitary towels for women.

So the company rebranded the bandage and then sold it as female sanitary product in the U.S. in 1920, and worldwide soon after.

This was the first product available to women specifically to help with menstruation.