An NHS hospital has been put on ‘black alert’ because its A&E department has been overwhelmed by soaring admissions.

The Royal Bolton Hospital in Greater Manchester issued the warning over the weekend, urging patients to only attend in cases of genuine emergency.

A so-called ‘black alert’ is declared when a hospital is under such significant pressure it cannot ‘deliver comprehensive care’ and patient care is at risk.

The warning comes amid a political row which has erupted over photographs of children sleeping on a floor and a chair in busy NHS hospitals with no free beds.

The Labour Party seized an opportunity to call the pictures an example of the state the Conservative Party has got the NHS into, while the Government said it was making ‘huge investments’ into improving the health service.

A spokesperson confirmed the hospital would remain on the alert, known internally as OPEL 4, on Monday.

‘As we have moved into the winter months there have been times when we have been busier than we would have expected across the hospital, which has led to us being at black on our internal escalation status.

‘Our top priority at all times is patient safety, and we are working hard to ensure that everyone who needs a bed is admitted and treated as quickly as possible.’

Norovirus outbreaks have caused the NHS to shut more than 1,100 hospital beds in England in the last week.

Health chiefs are urging people to avoid visiting hospitals or their GP if they have the highly contagious bug, to avoid passing it on.

They said people should stay at home and wait at least 48 hours after symptoms pass to return to work or school.

The plea for sufferers to stay at home comes amid unprecedented pressure on the NHS, which experts say is ‘already pushed to its limits’.

Almost double the number of beds have been closed every day this week compared to last year, official figures show.

Norovirus spreads rapidly in hospitals and schools because people are in close quarters, while children can forget to practise proper hygiene.

A spokeswoman said patients were not being turned away from the hospital’s A&E unit.

NHS England and individual trusts are holding back from publishing waiting times data until after the general election on Thursday.

But figures for October showed casualty units were performing worse than ever before, with one in six patients not treated within four hours.

A Greater Manchester Health and Social Care Partnership spokesperson urged people to only visit A&E in cases of emergency.

They added: ‘A&E departments at hospitals across Great Manchester had an extremely busy weekend.

‘In order to cope with the high demand, the level of attendance and the length of waits at all our A&E departments are monitored constantly.

‘This means the best use can be made of all available resources. Our staff are working extremely hard as we enter the most intense period of winter.

‘However, we ask that the public help too and only go to A&E if necessary. Anyone who is unsure of the right place to get treatment should ring the NHS 111 phone line.’

The NHS has already been put under unprecedented pressure thanks to an early start to the flu season and norovirus outbreaks.

More than 1,100 beds were shut in a week to prevent norovirus spreading rapidly through wards, while figures showed ICU admissions for influenza had tripled in a year.

The latest weekly data from Public Health England also showed the hospitalisation rate from flu has doubled in a week – from 2.8 admissions per 100,000 to 4.31. This is twenty times higher than the same time last year.

The Royal Bolton Hospital is not the first NHS hospital to issue an OPEL 4 warning this winter.

Bosses at the Royal Cornwall Hospital made the same alert on November 20, while Nottingham University Hospitals Trust declared the same problem two weeks before.

The state of the NHS has been thrust into the limelight just two days from the UK’s general election.

The state of NHS hospitals in England was thrust front and centre yesterday when two photographs emerged of sick children waiting in hospitals with no free beds.

The plights of four-year-old Jack Williment-Barr and Lily Webb, nine months, drew heated debate as an example of how patients are left in overloaded hospitals.

Jack was a patient at Leeds General Infirmary and was thought to have pneumonia. With no free beds available, his mother set him down on the floor and photographed him sleeping there. He was later diagnosed with flu and tonsillitis.

Labour leader Jeremy Corbyn brandished the photo during an impassioned speech in Bristol.

While Prime Minister Boris Johnson was filmed trying to avoid looking at it when a journalist showed it to him in an interview, before he later apologised and pledged ‘huge investments’ in the NHS.

Conservative Health Secretary Matt Hancock visited the Yorkshire hospital in person to try and diffuse the situation and then claims of Mr Hancock’s special adviser being punched by a Labour activist then began to circulate online, but later turned out to be false. 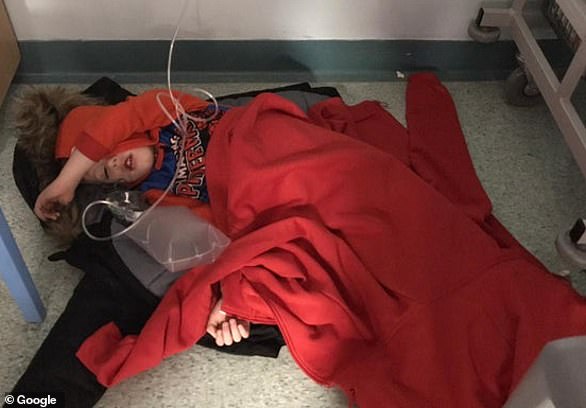 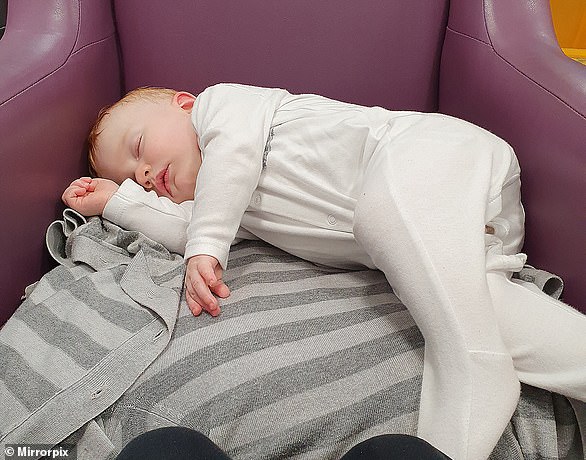 Later yesterday evening the Mirror published a photo of Lily, who went to  Countess of Chester Hospital with an ear infection and dehydration last week and was pictured sleeping on a chair. Former editor of the paper, Piers Morgan, described the picture as ‘harrowing’.

Speaking in an interview with BBC Breakfast today, Mr Corbyn said: ‘It’s an example of what’s happening in our NHS. And it is obviously awful for that little boy and the family, the way they were treated.

‘But it does say something about our NHS when this happened, and then all research shows there’s a very large number of hospitals where patients are at risk because of staff shortages, because of a lack of equipment, because of poor maintenance of hospital buildings.

‘It is a serious issue. It is a political issue, how we fund the NHS.’

Mr Johnson said: ‘It’s a terrible, terrible photo. And I apologise obviously to the families and all those who have terrible experiences in the NHS.

‘But what we are doing is supporting the NHS, and on the whole I think patients in the NHS have a much, much better experience than this poor kid has had.

‘That’s why we’re making huge investments into the NHS, and we can only do it if we get Parliament going, if we unblock the current deadlock, and we move forward.’

Prime Minister Boris Johnson drew criticism after seeming reluctant to look at a photo of Jack, who was at Leeds General Infirmary with suspected pneumonia.

And the Labour Party, led by Jeremy Corbyn, today had to fend off accusations of it using the NHS as a ‘political football’.

Mr Corbyn said the cases of Jack and Lily, who went to Countess of Chester Hospital with an ear infection and dehydration, were examples of regular events in the NHS.

He told BBC Breakfast today: ‘It’s an example of what’s happening in our NHS. And it is obviously awful for that little boy and the family, the way they were treated.

‘But it does say something about our NHS when this happened, and then all research shows there’s a very large number of hospitals where patients are at risk because of staff shortages, because of a lack of equipment, because of poor maintenance of hospital buildings.

‘It is a serious issue. It is a political issue, how we fund the NHS.’