Popular ice creams like Ben & Jerry’s and Twister will no longer advertise to children.

Unilever, which owns brands such as Wall’s Ice Cream and Ben & Jerry’s among many others, is making the commitment in the face of a childhood obesity crisis.

The company will shift advertising of sweet treats away from children under the age of 12 by removing cartoon characters from packaging.

The move is part of a wider effort in the industry, and follows German supermarket chain Lidl’s decision to remove cartoons from their own brand cereals.

Unilever will also cut down on social media posts targeted at youngsters by no longer paying celebrities that appeal primarily to them.

Critics say using animated characters on food laden in sugar encourages children to pester parents into buying them. Unilever’s Twister is pictured with Max the lion on the packaging 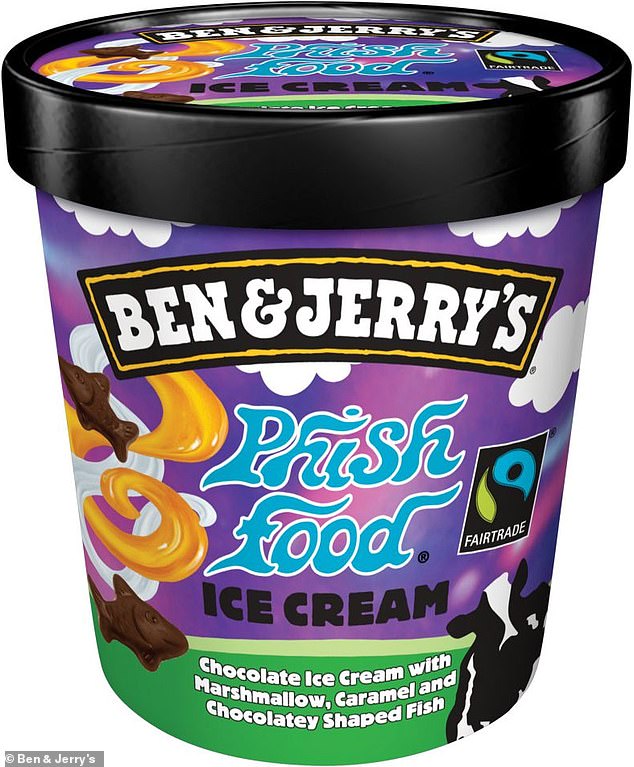 The food and drink giant, which owns Walls Ice Cream and Ben & Jerry’s, is making the commitment in the face of a childhood obesity crisis and will instead target parents

‘It is the promise of better ice cream and healthier, happier children. Both now and in the future.’

Unilever – the world’s largest ice cream maker according to Forbes – will apply the new rules to all its products by the end of 2020.

Under ‘strict controls’, traditional media such as films will no longer contain ice cream adverts that appeal to children under 12.

Adverts that appeal to those under 13 on social media, using celebrities and influencers, will also be halted. However, most platforms have age restrictions anyway.

The food giant will begin with its Wall’s Ice Cream products, which include Twister, Paddle Pop, Calippo, Cornetto and Solero.

Some feature playful a cartoon of a lion, including Mini Max Twister and Mini Milk.

As well as advertising controls, plans are already underway for a ‘responsibly made’ range from Wall’s Ice Cream.

Every ice cream in the kids’ range will have no more than 110 calories and a maximum of 12g of sugar per portion.

Unilever said the move was in response to figures from the World Health Organization – which estimates that 124million children between the ages of five and 19 suffered from obesity worldwide, while 213million were overweight.

In the UK, more than one in three children (34 per cent) are obese or overweight when they leave primary school.

One in every 25 British ten to 11-year-olds are severely obese, the fattest possible category.

HOW MUCH SUGAR IS TOO MUCH?

The amount of sugar a person should eat in a day depends on how old they are.

Children aged four to six years old should be limited to a maximum of 19g per day.

Seven to 10-year-olds should have no more than 24g, and children aged 11 and over should have 30g or less.

Meanwhile the NHS recommends adults have no more than 30g of free sugars a day.

Popular snacks contain a surprising amount of sugar and even a single can of Coca Cola (35g of sugar) or one Mars bar (33g) contains more than the maximum amount of sugar a child should have over a whole day.

A bowl of Frosties contains 24g of sugar, meaning a 10-year-old who has Frosties for breakfast has probably reached their limit for the day before they even leave the house.

Children who eat too much sugar risk damaging their teeth, putting on fat and becoming overweight, and getting type 2 diabetes which increases the risk of heart disease and cancer.

Lidl announced earlier this month that they would be stripping the animated crocodiles, bees, tigers and monkeys off their cereal packaging.

In response, Tam Fry, chairman of the National Obesity Forum, told MailOnline the decision would benefit ‘untold millions of mums’.

He added: ‘Children who throw tantrums in the shopping aisle when they fail to get the packet they want are the scourge of parents.

‘It may matter little what is actually inside the packet: it’s most likely the colourful and attractive cartoon animal on the outside that triggers their desire.

‘Remove the cartoons and kill off pester power at a stroke is the prayer of untold millions of mums. That Lidl is answering that prayer should be warmly welcomed.’

Public Health England recommends children aged seven to 10 should have no more than 24g of free sugars a day – the equivalent of six sugar cubes.

Children aged four to six should have no more than 19g (five sugar cubes). It is recommended that adults have less than 30g of free sugars a day.

There’s no guideline limit for children under the age of four, but it’s recommended they avoid sugar-sweetened drinks and food with sugar added to it.

Lidl’s Crownfield Choco Rice, its own-brand of Coco Pops, is crammed with 16g of sugar in one tiny 30g serving – not even a third of a bowl.

A 60g serving, which is a more realistic-sized portion, has 32g of sugar – more than three Krispy Kreme glazed doughnuts.

The budget supermarket’s Crownfield Choco Shells, a discounted version of Kellogg’s Coco Rocks, are crammed with 18g of sugar in a 50g portion.

Lidl will remove cartoon characters from its sugary cereal packaging after growing pressure from campaign groups and ministers. Its Crownfield Rice Snaps, an own-brand version of Kellogg’s Rice Crispies, will have its crocodile character removed

The 2008 Healthy Weight, Healthy Lives strategy pledged to reduce the ‘number of overweight and obese children in England to levels seen in the year 2000’, when 15 per cent of youngsters were deemed overweight.

Ministers brought in compulsory cooking classes in school as part of the pledge, and encouraged healthier food choices and physical exercise.

The 2008 Healthy Weight, Healthy Lives strategy pledged to reduce the ‘number of overweight and obese children in England’. But official NHS figures show rates of morbid obesity have almost doubled among Year 6 pupils since the near-£400million scheme was launched

But official NHS figures show rates of morbid obesity have almost doubled among Year 6 pupils since the scheme was launched.

And obesity rates among Year 6 pupils rose by two-thirds in that time, jumping from 77,000 to 121,000, according to the NHS’ National Child Measurement Programme.

It means a third of children are overweight by the time they finish primary school.

Tam fry, chairman of the National Obesity Forum, told MailOnline that officials are ‘too chicken’ to enforce strict measures to tackle obesity.

He said: ‘For some thirty years UK governments have been setting targets to win the fight against obesity but in every case have failed to meet them.

‘Wednesday’s missed target illustrates the lamentable disinterest of ruling politicians in tackling a disease which is costing the NHS £24billion every year.

‘They huff and puff and know full well the tough measures that must be implemented but are too chicken to legislate for them.

NHS figures in October revealed Almost half (44.9 per cent) of all year six children in Barking and Dagenham were considered to be overweight, obese or severely obese in 2018/19. In contrast, the rate was just 23.4 per cent in Richmond upon Thames

‘It is, as if by setting targets, they think the problem will be magicked away. It won’t be.

‘The latest target set this year, to halve childhood obesity by 2030, will have the same fate if tough action is not begun in 2020.’

Mr Fry said mandatory calorie labelling in restaurants, sugar levies and a ban on energy drinks were some of the tough new rules needed to tackle the spiralling crisis.

The Healthy Weight, Healthy Lives project was launched in January 2008 by a Labour government that had been in power since 1997.

Responsibility for obesity was shared between Health and Education ministers, and supported by a large ring‐fenced budget over three years.