Mosquitoes can be genetically engineered to stop them spreading dengue fever to humans, a study has revealed.

Working in a lab, scientists created mosquitoes which were immune to the tropical disease and therefore unable to pass it on through bites.

They injected the insects with human immune system proteins which were able to fight off all four strains of dengue.

These proteins stopped the virus from multiplying inside the mosquito, meaning it never became strong enough to be transmitted.

Dengue threatens the health and lives of millions of people living in hot countries every year, and can cause fever, vomiting and deadly bleeding.

The scientists’ process worked by injecting immune system proteins called antibodies into the mosquitoes. These would then spread through the body and, in theory, to the mosquitoes’ offspring to make them all resistant to dengue viruses and unable to spread them 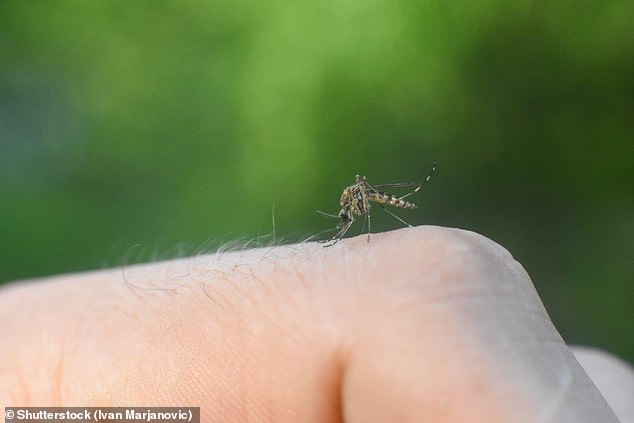 Aedes aegypti mosquitoes are the main transmitter of dengue fever, which infects millions of people per year and leaves around 500,000 needing hospital treatment. Researchers found a way of making the insects immune to the virus and therefore stopping them passing it on (stock image)

Antibodies are created naturally by the body and are what enables the immune system to destroy bacteria and viruses by itself without medical help.

But someone must become infected with, or exposed to, an illness before the body is able to develop them, which is risky with such a deadly disease.

The researchers found putting human dengue antibodies into mosquitoes stopped the disease spreading among the insects.

And by engineering the genes of the insects to make sure those with the antibodies inside them were successful breeders, researchers said it would be possible to make this immunity spread through the wild population of the insects.

Professor Omar Akbari, who led the study, said: ‘Once the female mosquito takes in blood, the antibody is activated and expressed – that’s the trigger.

‘The antibody is able to hinder the replication of the virus and prevent its dissemination throughout the mosquito, which then prevents its transmission to humans. It’s a powerful approach.

‘It is fascinating that we now can transfer genes from the human immune system to confer immunity to mosquitoes.’

Dr Prasad Paradkar, study co-author, told ABC: ‘Because they [the mosquitoes] don’t get infected they won’t be able to transmit that to someone else.’

WHAT IS DENGUE FEVER?

Dengue is a viral infection spread by mosquitoes.

It is caught by people visiting or living in Asia, the Caribbean, and North, South or Central America.

Mosquitoes in the UK do not spread the virus.

In most cases, the infection is mild and passes in around a week.

There is no cure or specific treatment.

Patients can relieve their symptoms via painkillers, staying hydrated and resting.

In rare cases, dengue symptoms can develop into severe dengue.

Elderly patients, or those with other medical conditions, are most at risk.

Severe dengue fever symptoms can include:

Severe dengue is usually treated via a blood and platelet transfusion, IV fluids for rehydration and oxygen therapy if levels are low.

The breakthrough marks the first time that all four types of the dengue virus have been targeted through engineering mosquitoes.

Previous attempts had only managed to tackle single strains.

Professor Luke Alphey, head of arthropod genetics at the Pirbright Institute, which investigates the spread of infectious diseases, was not involved with the research but told MailOnline it was a ‘big deal’.

‘This sort of work has worked on one virus at a time,’ he said.

‘The principle that this approach could give you broad spectrum resistance to these viruses [all four types of dengue] is really exciting.’

The dengue virus, for which there is no known cure, is generally mild and passes in around a week.

Normal symptoms include fever, a severe headache and nausea and vomiting.

However, in rare cases the virus can become life-threatening, with symptoms including severe skin bleeding, organ failure and dangerously low blood pressure.

Around 390milliom people per year globally catch dengue, with cases common in Asia, the Caribbean, and North, South or Central America.

There are also an estimated 12,500 deaths from the virus each year.

The Aedes aegypti is the main mosquito that spreads dengue. It also spreads yellow fever and Zika.

A drawback of the approach, Professor Alphey said, was that it focused on using only one antibody.

Antibodies are extremely specific and will not work against viruses which they are not matched to.

Professor Alphey cautioned that a small mutation in the dengue virus would make it resistant to the antibody which the scientists used, thus able to spread again.

‘This example only has one antibody in it. So a small change in the virus would lead to resistance to that one antibody.

‘If you could link a few antibodies which affected other parts of the virus that would be more effective.’

The research was published in the journal PLOS Pathogens.