Thousands of patients across the UK can be tested for coronavirus every day with a new diagnostic test, the Government has said.

Preparation to control cases have been stepped up after a third British person tested positive for the virus yesterday and the Government faced a backlash for its ‘passive’ and ‘weak’ response to the advancing outbreak.

From Monday, twelve laboratories in the UK will have the capacity to analyse swabs taken from suspected patients. Until now, only one lab in London has been able to do this.

A total of 620 tests have been conducted on UK citizens, of which 617 were confirmed negative and three positive.

But experts have warned the UK to brace for more cases to emerge, as The World Health Organisation expects the ‘peak’ in China is yet to come.

Some 16 countries have barred travellers from China entering, but the UK has not followed suit, leading to a barrage of criticism for failing to protect the country with speediness.

Last night the Government issued ‘updated travel advice’ – which simply warned travellers from nine Asian countries ‘to phone NHS 111 and quarantine themselves’ if they feel ill.

Cases of coronavirus worldwide passed 31,000 today, while the death toll sits at 638. However, there have been an encouraging drop in cases in recent days.

In Wuhan, where the virus first emerged at the end of December, a pop-up laboratory was built in five days. It was designed to perform 10,000 coronavirus tests per day to cope with the outbreak.

Thousands more patients across the UK can be tested for coronavirus every day with a new diagnostic test, the Government has said. Pictured, a scientists in the pop-up Huoyan Laboratory specialized in the nucleic acid test on the novel coronavirus in Wuhan, China, where the outbreak started 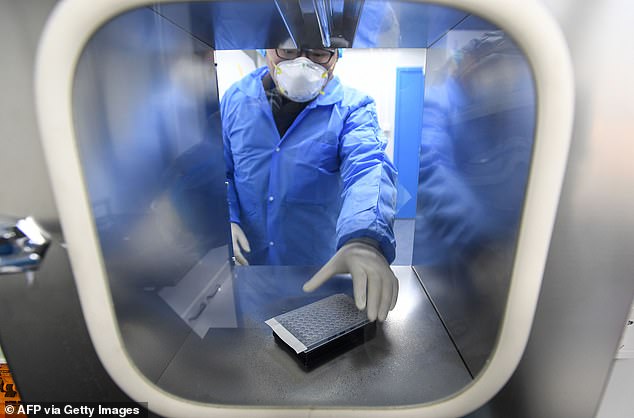 The diagnostic test developed by Public Health England (PHE) is being rolled out to laboratories across the UK starting on Monday February 10. Pictured, a lab technician taking samples of suspected cases in a Wuhan, where up to 10,000 people can be tested a day

The UK’s third coronavirus patient was confirmed on Thursday. It comes almost a week after two Chinese nationals were confirmed to have the lethal virus in York. Meanwhile 93 others are quarantined on the Wirral after being evacuated from Wuhan – while another among them was rushed to a hospital in Oxford. Experts have warned the UK to brace for more cases to emerge 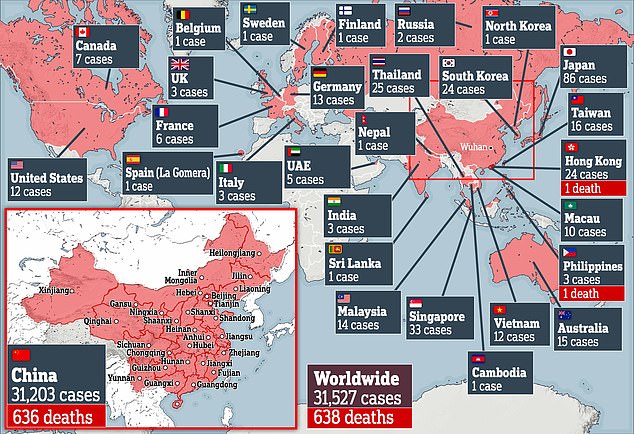 Cases of coronavirus worldwide passed 31,000 today, while the death toll sits at 638. Some 28 nations or territories have reported the killer virus

The diagnostic test developed by Public Health England (PHE) is being rolled out to laboratories across the UK starting on Monday February 10.

With more scientists on board at 12 laboratories, it will ‘accelerate the country’s testing capabilities’.

A statement said the move is to make sure the country is prepared for further cases – three have been confirmed so far, but more are predicted to emerge.

The new measures will increase testing capacity to 1,000 people in the England alone. PHE could not give estimate a figure for the rest of the UK.

Scores of passengers fleeing the coronavirus-hit country have been pouring into Britain every day without being tested for the virus, leaving many baffled about what is being done to curb the killer virus accelerating in the UK.

One British man who got his family on the ‘last available Air China flight to UK’ blasted the Government as ‘passive’ and revealed he simply strolled through Heathrow unchecked.

Without proper screening in place for travellers from the disease-hit country, it’s possible people can slip into the country with or without symptoms.

The third British patient diagnosed with coronavirus had visited a business meeting in Singapore before travelling back home to the UK.

Despite this, the Government are not believed to be hunting down people onboard any Asia-UK flight the latest sufferer may have travelled on. It has emerged his family have also not been quarantined.

UK health officials were today accused of a farcical response after they appealed to anyone who has been in contact with the man for 15 minutes – but refused to identify him.

Government sources have for days suggested that the UK is on the brink of declaring a ban on arrivals from China, a measure wanted by furious Brits on social media.

Leading virologists and infectious disease specialists met at a hastily organised meeting by the respected Science Media Centre in London today amid the escalating outbreak.

They made a series  of dire warnings about the disease, including:

But ministers have yet to announce any hard ban – despite 16 other countries and territories around the world putting measures of some kind into place, including in Saudi Arabia the US, Australia, New Zealand and Japan.

One MP on the All Party Parliamentary China Group admitted the epidemic ‘is getting more serious’.

They claimed they would be surprised if the travel restriction was not imposed ‘in the next week or two’.

The UK is still bound to EU immigration laws and obligated to fall in line with any decisions on travel restrictions made by the bloc until the end of the year, despite having technically left on January 31.

The Government is said to be considering imposing the ban anyway, against the will of Brussels.

But sources say it would be pointless if the EU does not follow suit because passengers could still enter Britain by going through other EU states.

‘What is the point in one of you banning flights if none of the others are going to do it?’ a senior government source told MailOnline. ‘Because you just get in by an indirect route.’

Brexit Party leader Nigel Farage said on February 5: ‘We can monitor flights from China landing back in the UK but we can’t monitor those landing from China in the rest of Europe. EU freedom of movement does make us more vulnerable.’

It comes after China’s ambassador to the UK, Liu Xiaoming, criticised the UK’s plea for all 30,000 of its citizens in the mainland to come home.

He said it was an overreaction and a disregard of World Health Organisation (WHO) advice.

Mr Xiaoming said: ‘[There] should be no panic, no overreaction. We advise the British side to take professional advice of WHO.

‘They told us they will follow WHO’s advice. It seems to me the words do not match with the deeds.

‘Life is still normal in most parts of China so I do say again in private and public I hope the British Government and public take an objective, cool-headed view of what is going on. We should support each other rather than weaken the other’s efforts.’

The novel coronavirus cannot currently be cured – antibiotics do not work against viruses – and no vaccine exists yet.

PHE claims to be one of the first countries outside China to have assured testing capability for the novel coronavirus after scientists there released the genetic sequence of the virus to aid other countries in spotting it.

If a patient has suspected coronavirus, GPs can take samples from the nose, throat and deeper respiratory tract and send them for laboratory testing.

Using the diagnostic test, scientists can look for genetic clues that identify the novel coronavirus that originated in Wuhan city.

A confirmatory test will continue to be conducted at PHE’s Colindale laboratories in London.

Professor Yvonne Doyle, medical director, PHE, said: ‘Once China confirmed that they had identified a novel coronavirus, Public Health England was ready to test potential cases in this country.

‘We have now trained scientists in labs across the UK to conduct the specialist test – ensuring that we are well prepared should we begin to see an increased number of cases across the country.’

PHE said it would also be helping the World Health Organization with testing samples from countries that do not have assured testing capabilities.

In other developments to the escalating outbreak today: