For Emma Williams-Tully and her husband Dan, the news that they were expecting a baby was even more emotional than for most newlyweds.

Emma had been told many times by doctors that she may never have children – because she suffers from a debilitating and painful condition which causes cells from the lining of her womb to grow elsewhere in the body.

Endometriosis affects as many as one in ten women in the UK and causes excruciating pain, infertility, extreme fatigue and depression.

It had taken Emma, from Wrexham, North Wales, 11 years just to get a diagnosis – a common obstacle facing those suffering from the condition.

Emma had been told many times by doctors that she may never have children – because she suffers from the debilitating and painful condition. But on Valentine’s Day in 2014, months after their wedding, the couple found out to their joy – and astonishment – that Emma was pregnant (pictured with her daughter)

Since then, she had undergone keyhole surgery four times to remove the excess tissue which left her in such agony she was unable to walk or even leave the house.

But on Valentine’s Day in 2014, months after their wedding, the couple found out to their joy – and astonishment – that Emma was pregnant.

Emma recalls: ‘My consultant said the term “miracle baby” was often used, but mine really was one.’

Their daughter, Annabelle, now four, is all the more precious because she will be Emma and Dan’s only child.

After Annabelle arrived, Emma was advised that because her endometriosis was so severe, she should have a hysterectomy, a procedure that can ease the pain for some women.

But even that took three seven-hour operations over a 17-month period to complete because of the extent of the damage her condition had wreaked on her organs.

The surgery was so complex that it left her with a perforated bowel and severed ureter, and needing a blood transfusion.

Frustratingly, it also ‘hasn’t made much of a difference’, she says.

She struggles to take her daughter to the park, is affected by chronic fatigue and pain and is unable to work. 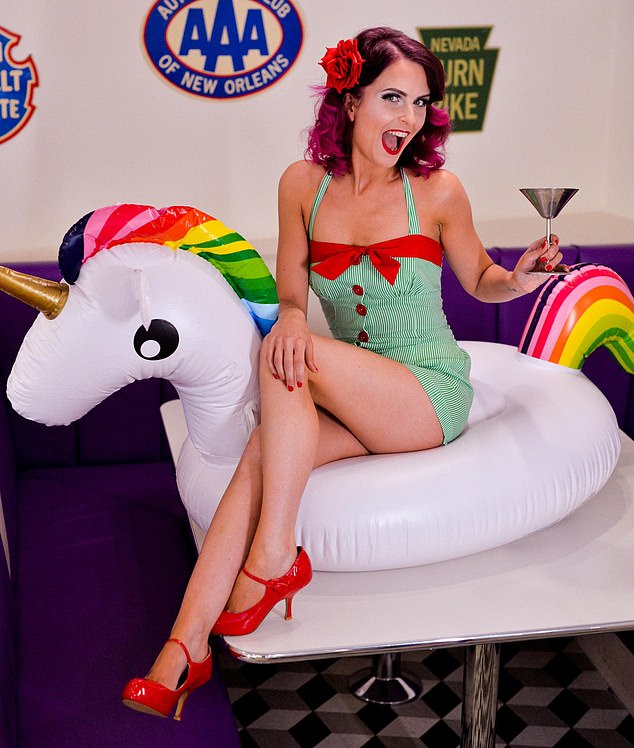 Inspired by Marilyn Monroe, who was also a sufferer, Emma (pictured in the calendar) has put together a charity calendar to raise funds for the charity Endometriosis UK

But Emma, 33, is determined to raise awareness of endometriosis, and of the 1.5 million women in the UK who are bravely battling the condition.

Inspired by Marilyn Monroe, who was also a sufferer, Emma has put together a charity calendar to raise funds for the charity Endometriosis UK. The glamorous retro-themed calendar, shot in a 1950s diner in Blackpool, brought together 11 other women who also suffer from the condition and has already raised more than £4,000.

Emma says: ‘I’ve always been passionate about raising money for charity but it’s usually been fundraising at BBQs, that sort of thing.

‘I’d just had another bout of surgery and it was a sink-or-swim moment – I could feel myself getting really quite depressed about the effect the condition was having on my life.

‘I advertised for models with endometriosis on Twitter and they came from all over the UK.

‘We’d never met before but it felt like we’d known each other for our whole lives. It was amazing. I couldn’t be more pleased that it’s helping to raise awareness of this awful condition.’

In a normal menstrual cycle, the lining of the womb thickens to prepare for a fertilised egg. If a pregnancy does not occur, the lining breaks down and is released. 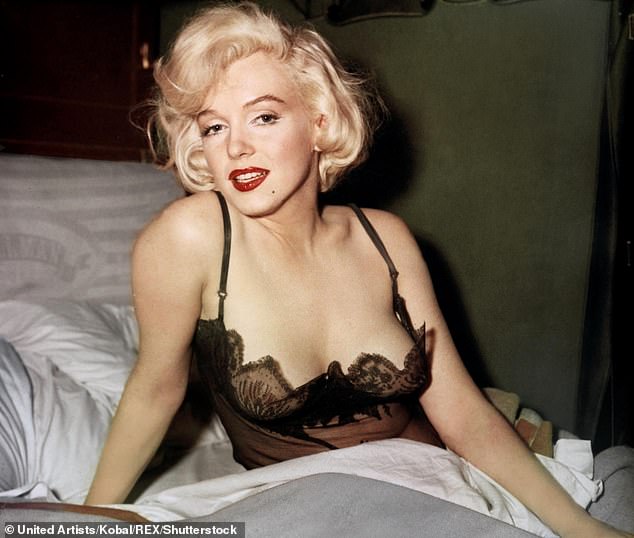 The glamorous retro-themed calendar (inspired by Marilyn Monroe, pictured), shot in a 1950s diner in Blackpool, brought together 11 other women who also suffer from the condition and has already raised more than £4,000

With endometriosis, cells like those in the lining of the womb grow elsewhere in the body, including around other internal organs such as the bowel and bladder. These cells are also subject to the hormonal signals that govern the fertility cycle, and break down too, but have nowhere to go – and so cause inflammation, pain and the formation of scar tissue.

There is currently no cure, and treatment including surgery, hormone therapy and pain relief can only help manage the symptoms, which are often confused with other conditions.

It means the average time for a woman to be diagnosed is about seven-and-a-half years.

Emma’s symptoms began when her periods started at the age of ten. They were immediately extremely heavy and painful, but she was dismissed by doctors who told her it was ‘supposed to hurt’. An ultrasound found nothing wrong. She says: ‘I remember sobbing and thinking, what’s going on with me? I thought I was losing my marbles.’

Like many women with gynaecological problems, Emma was prescribed different versions of the contraceptive pill which failed to have any effect. Then a doctor suggested injections which stop the body producing the hormone oestrogen, inducing a ‘false’ menopause. Oestrogen fuels the spread of endometriosis and the injections, of a drug called leuprorelin (also known by the brand name Prostap), can not only help with the pain but can allow doctors make a formal diagnosis.

Despite the terrible emotional side effects and hormonal sweats, Emma’s pain subsided – indicating that the cause was indeed endometriosis.

Emma says: ‘It was on my uterus, bladder, bowel, hips, back, rectum – it had spread like wildfire.’ She has now had nine surgical procedures, including three to remove her womb and ovaries, as the cells continue to multiply.

‘It’s completely and utterly debilitating. The damage has been horrific. The toll it has on my life, and on my family’s lives, is unspeakable. I’m exhausted – the pain makes me feel physically ill. Sometimes it feels like it’s poisoning my body. I’d love to be able to go to work, to take Belle to the park without getting exhausted.’

Despite everything, her message is one of hope. ‘I want to tell women never to give up. I’m hopeful we’ll have a cure one day. We’re such a strong community, we “endo sisters”, and it’s amazing what we can do when we stand together.’

Emma Cox, chief executive of Endometriosis UK, said: ‘Many women find symptoms difficult to talk about and don’t realise what they are suffering from and that the level of pain they experience is not normal. As the symptoms overlap with other conditions, cases continue to go under-diagnosed.

‘The calendar shoot will undoubtedly help normalise invisible menstrual conditions like endometriosis, and raise the vital awareness that the condition needs to help drive down alarming diagnosis times.’

The Endometriosis UK calendar costs £7.99 and is available from endometriosis-uk.org/calendar-girls.

Ever wonder why you have an appendix?

It has long been dismissed as a useless evolutionary left-over, but the appendix may actually have a very important role.

According to researchers from Midwestern University in Arizona, the worm-shaped organ helps the body recover from stomach bugs.

The scientists claim that the appendix is a ‘safe house’ for good bacteria, with beneficial bugs taking refuge there when bad bacteria are overrunning the gut, ready to recolonise the digestive system after the infection eases.

Support for the theory comes in studies showing that people who have had their appendix removed take longer to recover from stomach bugs.

Health hacks: Take a hot bath to cut your risk of a stroke

A long soak in a hot bath five times a week could cut your risk of having a stroke – and it’s not just because it’s so relaxing.

A Japanese study of more than 800 people aged 55 to 77 found those who regularly soaked at 41C had healthier arteries. The team from Kyoto University concluded that being immersed in hot water may increase blood flow to the heart and ease the opening and closing of blood vessels, reducing blood pressure and the risk of stroke. 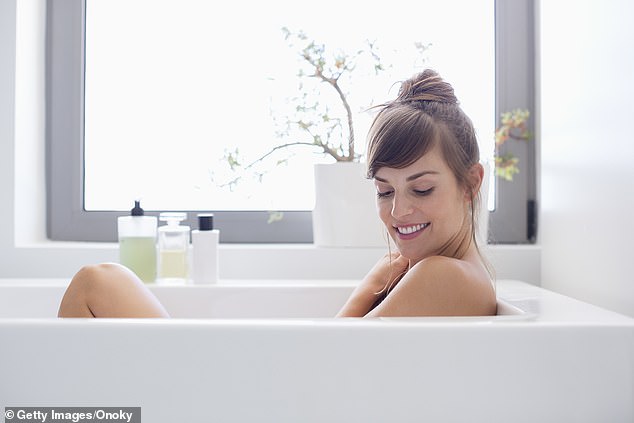 Can’t stomach vitamin pills? Try sipping your daily nutrients instead, in this raspberry and pomegranate tea packed with fatigue-fighting B12, B6, thiamin and riboflavin. 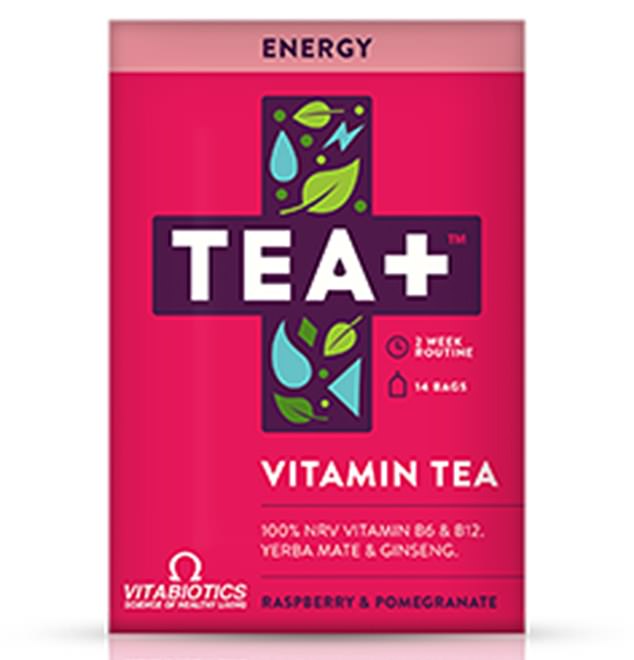 Can’t stomach vitamin pills? Try sipping your daily nutrients instead, in this raspberry and pomegranate tea packed with fatigue-fighting B12, B6, thiamin and riboflavin