A woman who had four breasts paid £5,500 for private surgery after the NHS refused to remove the extra lumps.

Phoebe Ellis, 22, was left ‘traumatised’ by her two extra breasts under her armpits, which first appeared when she was 12.

She spent her teenage years suicidal and desperate for answers while hiding her ‘freak’ body under baggy clothes.

It took a decade for Ms Ellis, of Hitchin, Hertfordshire, to finally get a diagnosis of accessory breast tissue from a private doctor.

The condition causes breast tissue to grow elsewhere, sometimes with nipples. Ms Ellis’s extra breast became sore on her period because they responded in the same way to hormones.

Until her diagnosis and operation in 2019, Ms Ellis thought the lumps under her arms were excess fat as well as fearing they were cancerous tumours.

She claims to have been turned away for help by the NHS multiple times, despite breaking down in front of her GP.

She was told her issue was ‘cosmetic’ and therefore not eligible for free surgery, but Ms Ellis knew the NHS offered some women breast reductions.

Phoebe Ellis, 22, had a condition which left her with four breasts. She paid £5,500 for private surgery (pictured after) after the NHS refused to remove the extra lumps 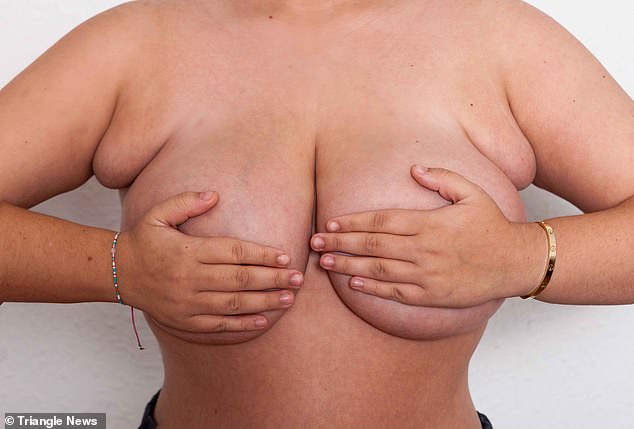 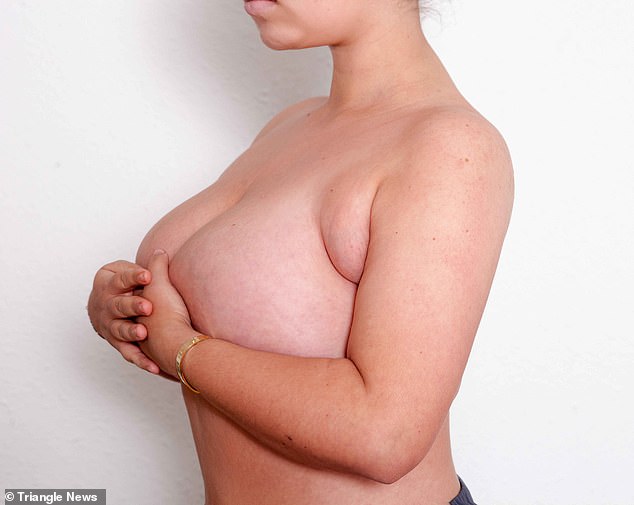 Ms Ellis was left ‘traumatised’ by her two extra breasts under her armpits, which first appeared when she was 12. She is pictured before her surgery 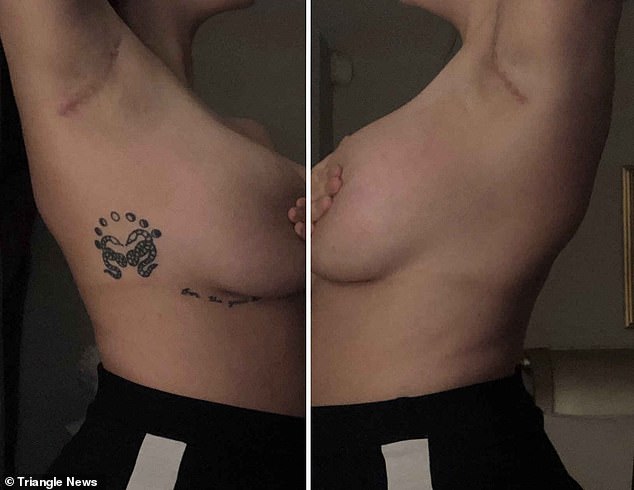 On November 21, 2019 – after scraping together £5,500 – Ms Ellis had an excision procedure. She now has scars under her armpits (pictured)

Ms Ellis, a camera operator and photographer, said: ‘What I went through was traumatising.

‘I was pretty suicidal and I felt like a monster. I didn’t know how to look at myself with any sort of fondness because I had these weird deformities.

‘I was so embarrassed and could never be intimate with any boyfriend. I was never comfortable with anyone because I was ashamed of them thinking I was a freak.

‘It is hard being resentful towards the NHS because you know what they do and how stretched they are but when it is regarding yourself it is easier to be resentful.’

Ms Ellis noticed she had the first of the two tennis ball-sized breasts hanging from her left armpit when she was 12.

She spotted another one on her right hand side when she was 15.

She had no idea what the strange and painful protrusions were and would always cover her upper body in embarrassment.

This was made worse because she lived in with her family in Estepona, Spain for three years at the time.

She said: ‘I wouldn’t wear a bikini on the beach and was always making an excuse out of swimming.

‘We did PE every day and it was hard maintaining multiple lies all the time.

Ms Ellis’s extra breasts would become painful during her period, so she went on the contraceptive pill which can ease pre-menstrual symptoms. 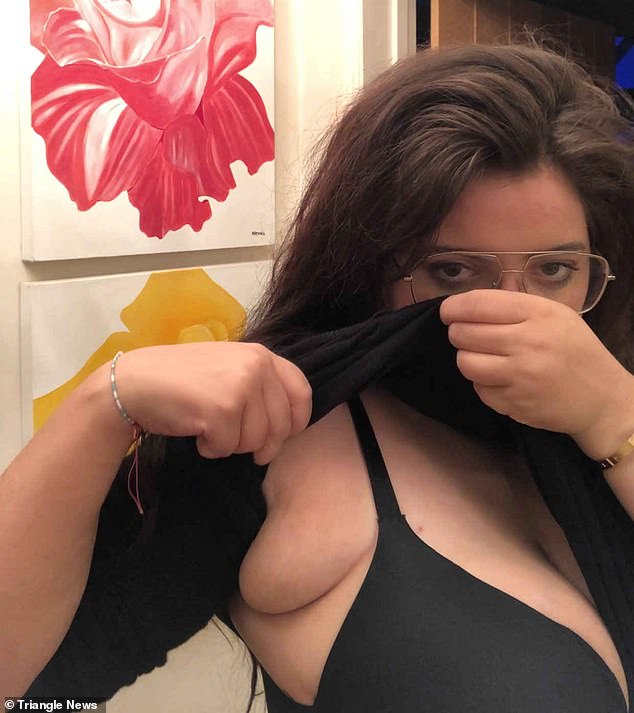 Ms Ellis said: ‘I was pretty suicidal and I felt like a monster. I didn’t know how to look at myself with any sort of fondness because I had these weird deformities’ 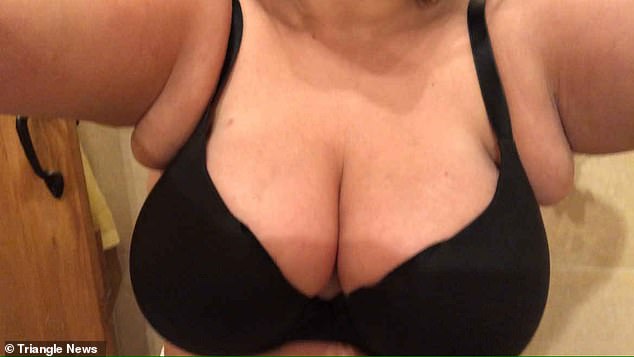 Until her diagnosis in 2019, Ms Ellis thought the lumps under her arms were excess fat – despite being slim – as well as fearing they were cancerous tumours 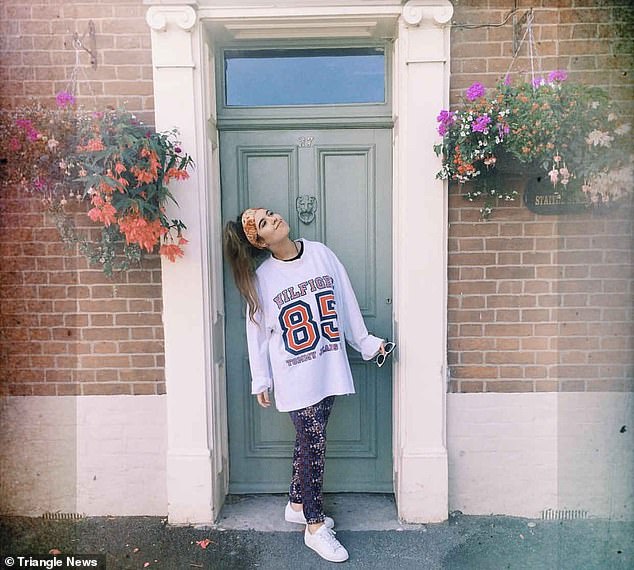 WHAT IS ACCESSORY BREAST TISSUE?

Accessory breast tissue is a relatively common condition affecting two to six per cent of women and one to three per cent of men.

Abnormal excess breast tissue is present anywhere along the ‘milk lines’ of the human body, such as the armpits. They are rarely seen in the face, back or thigh.

Dr Aamer Khan – co-founder of Harley Street where Ms Ellis had her accessory breasts removed – said: ‘Phoebe had accessory axillary breast tissue which presented like additional breasts under her arms.

‘The condition is known as accessory breasts, polymastia or supernumerary breasts.’

Dr Khan added: ‘In some cases, extra breasts may appear with nipples or areolae, or both.

‘The condition is congenital, it is present from birth and patients like Phoebe do not notice it until they reach puberty.

‘As its growth and development is triggered by hormonal changes it may also become more evident during pregnancy or lactation when some women can secrete milk.’

Treatment is not usually required and the NHS does not offer it routinely. It may be authorised depending on where someone lives.

Dr Khan said: ‘Phoebe suffered from large and painful accessory breasts which clearly caused her issues with body image and psychological distress over a period of ten years.

‘This is particularly sad to see in a young person embarking on adult life.’

The tenderness felt like when neck glands become sore, and she said having her arms weighing on them was unbearable.

The schoolgirl was unaware the lumps were made of breast tissue for years.

She said: ‘It sucks thinking that it was just fat.

‘I had really big boobs anyway so I thought it could have something to do with that.’

Ms Ellis said she asked for surgery or investigations on the NHS four times in total. She was always refused.

Her lowest point was when she turned 20-years-old and broke down to her GP.

She said: ‘I told her that nobody understands and that it was ruining my life and I hate myself.

‘I couldn’t look in the mirror without looking at myself with disgust because of this horrible flaw.

‘Even if I lose all the weight in the world and had a six pack I would still have these horrible lumps there and I would hate myself.’

The doctor promised to fight her corner but on the morning of her 21st birthday on December 8, 2018, an NHS letter was delivered.

Once again Ms Ellis was told her issue was cosmetic.

‘I read it and burst into tears,’ Ms Ellis – who was hosting a birthday party – said.

‘I genuinely hated myself.

‘I know women who have had breast reduction from the NHS.

‘But why is it that I would be more likely to get a nose job on the NHS rather than being able to remove tumours that nobody knows what is inside them.

‘It felt really hurtful that nobody cared.’ 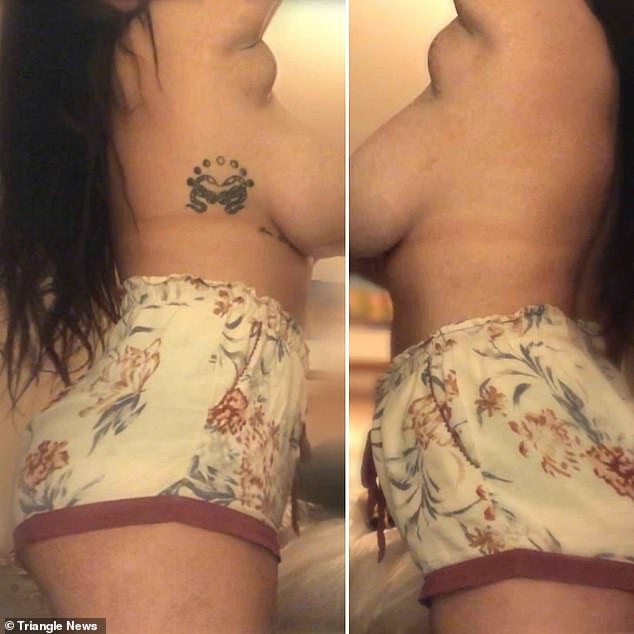 Ms Ellis went on the contraceptive pill because her extra breasts would become painful during her period. She said the soreness was like neck glands when they are raised 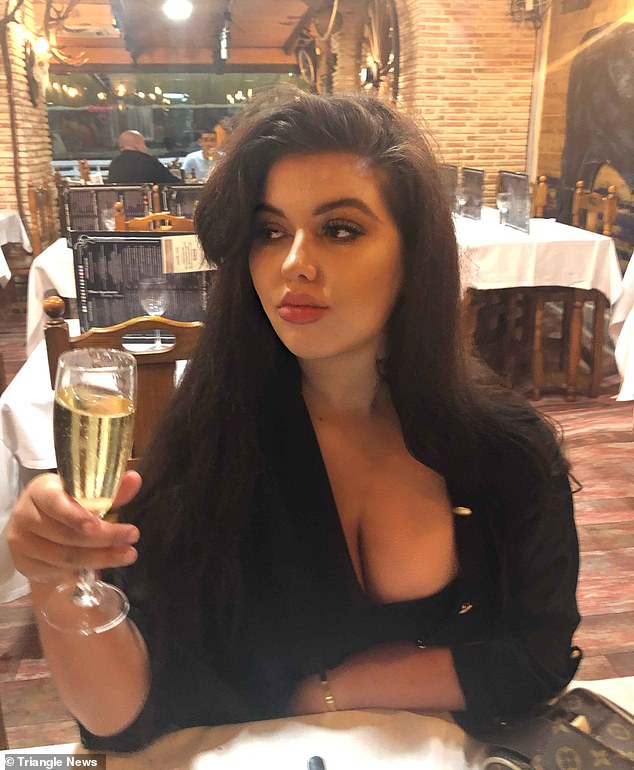 Ms Ellis, who always hid her upper body, said: ‘It was my secret shame. I never felt sexy. I never felt wanted. I felt weird and gross and baggy T-shirts were my best friend’

Ms Ellis’s devastated parents desperately tried to raise money with the help of family members to pay for private surgery.

She said she was ‘riddled with guilt’ and was preparing to work for 10 years to pay thousands of pounds to have them removed.

She said: ‘When he saw them he was horrified on behalf of me and said it must affect my life so much.

‘I thought that someone finally appreciated how much this was affecting me.’

The surgery was successful and the tumours were sent away to the lab for testing.

It wasn’t until this month when Ms Ellis discovered she had a condition called accessory axillary (armpit) breast tissue.

The condition affects between two and six per cent of women and one to three per cent of men, making it relatively common.

It is most often found during a mammogram or ultrasound – both of which Ms Ellis was not offered – sometimes by mistake if the additional breasts are small and the person has never noticed it.

The additional breast tissue is separate to the breasts on the chest,  with its own ductal system to produce milk.

The NHS does offer surgery for accessory breast tissue, but it authorisation depends on where you live and a set of criteria.

Ms Ellis was left with big scarring after her privately paid operation, but said the weight of the world was lifted. 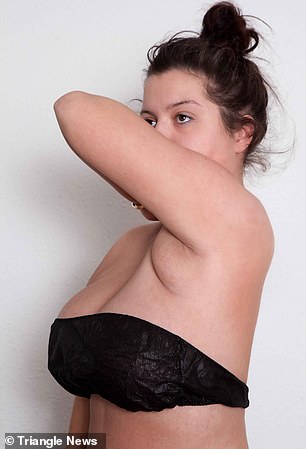 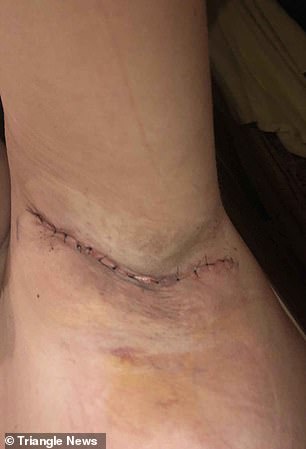 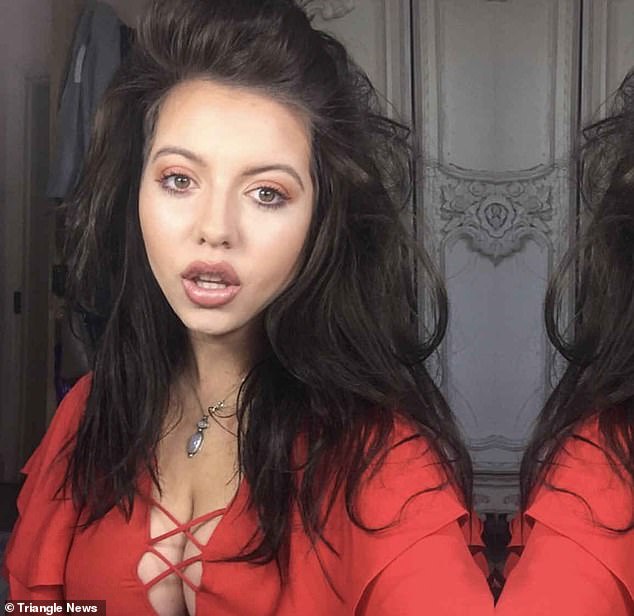 Ms Ellis said it was ‘really hurtful’ that the NHS did not care to help her, even though they did breast reductions and nose jobs for people who need them

She said: ‘I felt it’s human nature to unfortunately look at lumps and extra additions with disgust rather than sympathy.

‘A protrusion will always be harder to look at with respect or kindness ahead of a scar.

‘That’s why I emphasised to Dr Khan that even if the scar was a metre long it would have still been better than the lumps.’

She added: ‘New Years Eve was the first time in 12 years I wore a top out.

‘I still had stitches in and the scars were really bad. But this is the precedent for my life now.

‘I was super relieved and felt a new wave of confidence. I tell anyone who will listen and show them pictures because now they are gone I feel like I own this.’

Ms Ellis has now plucked up the courage to join the gym and said she can finally live a normal life.

She is now striving to ensure other young women are aware that they are not alone or abnormal.

‘When I was alone I had nobody to look up to and no information,’ she added. ‘It was impossible to find anything so I thought I was a freak.

‘I want young girls not to hide away in shame and to let it affect the rest of your life.’

‘The condition is congenital, it is present from birth and patients like Phoebe do not notice it until they reach puberty.

‘As its growth and development is triggered by hormonal changes it may also become more evident during pregnancy or lactation when some women can secrete milk.’