A quarter of Italy’s population has been put under lockdown in a desperate bid to stop the spread of coronavirus.

The killer disease has gripped Italy where the number of cases rose by 1,247 in the last 24 hours – its biggest daily increase in cases since the outbreak began – taking the total to 5,883.

Another 36 people also died as a result of the virus, taking the total to 233 in the biggest outbreak in Europe.

Prime Minister Giuseppe Conte signed a decree in the early hours of this morning that will continue until April 3.

Around the world, more and more countries are bracing for a surge in virus cases by imitating China – where the virus first emerged late last year and which has suffered the vast majority of infections – by imposing travel controls and shutting down public events.

Mr Conte said: ‘For Lombardy and for the other northern provinces that I have listed there will be a ban for everybody to move in and out of these territories and also within the same territory. 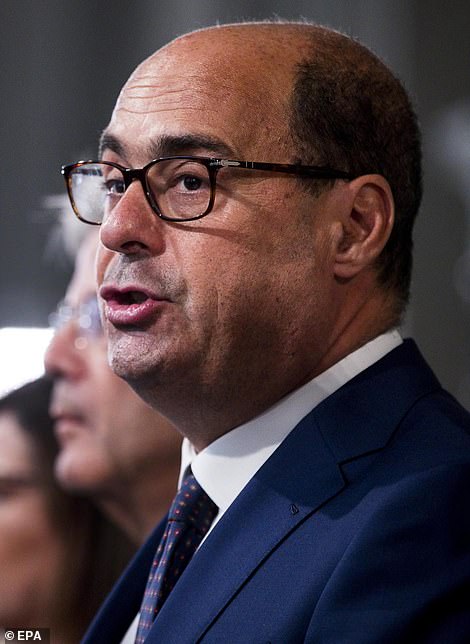 Prime Minister Giuseppe Conte signed a decree in the early hours of this morning putting a quarter of Italy’s population under lockdown. It comes as leader of Italy’s Democratic party Nicola Zingaretti (right) tested positive for coronavirus marking the first senior politician to catch the bug in the nation 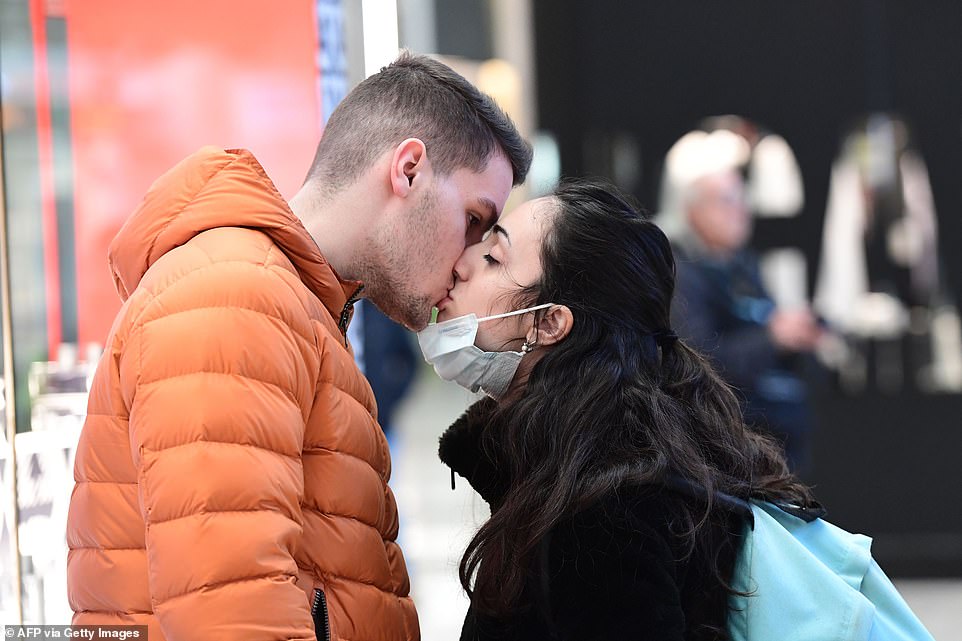 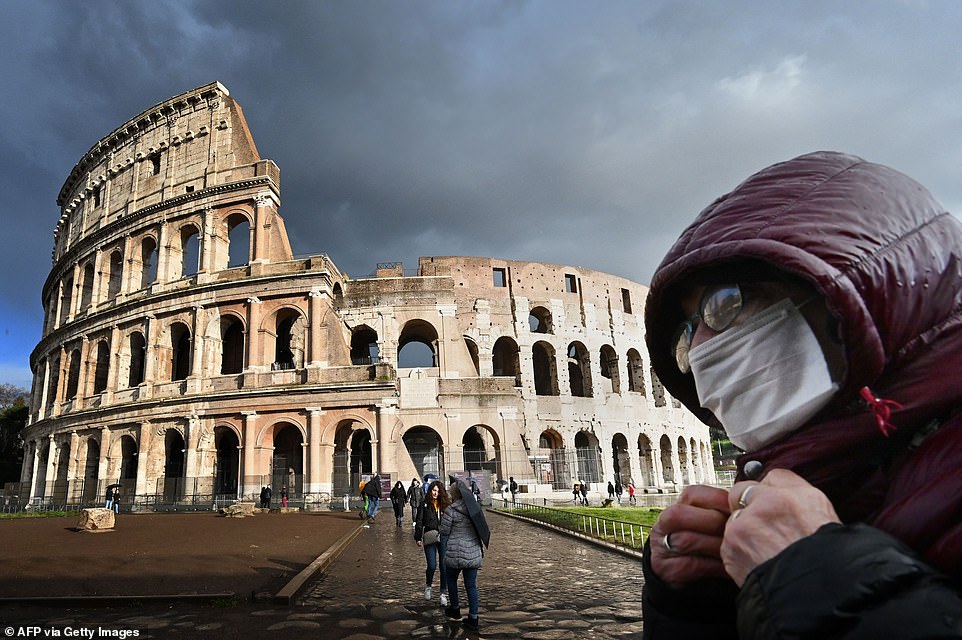 Coronavirus has gripped Italy where the number of cases rose by 1,247 in the last 24 hours – its biggest daily increase in cases since the outbreak began – taking the total to 5,883 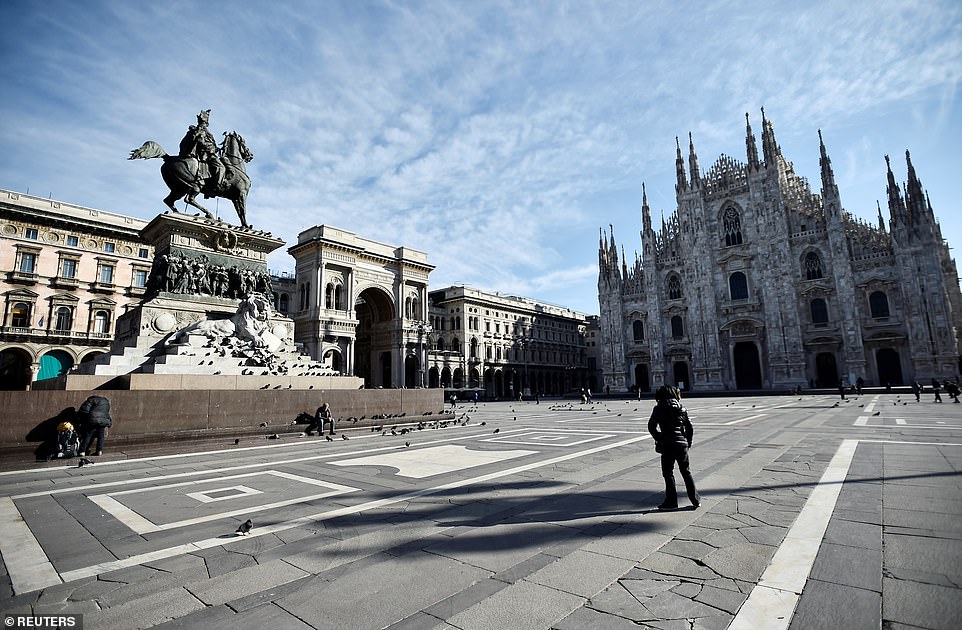 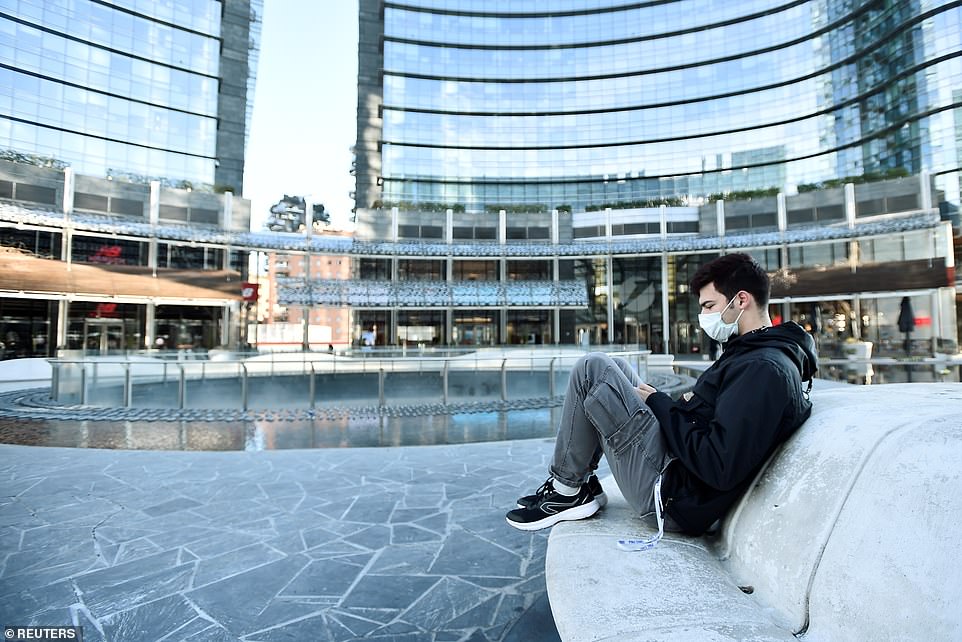 A man wearing a face mask in Milan, where streets have been left virtually empty after the Prime Minister issued a decree for mass lock downs in the north that will continue until April 3 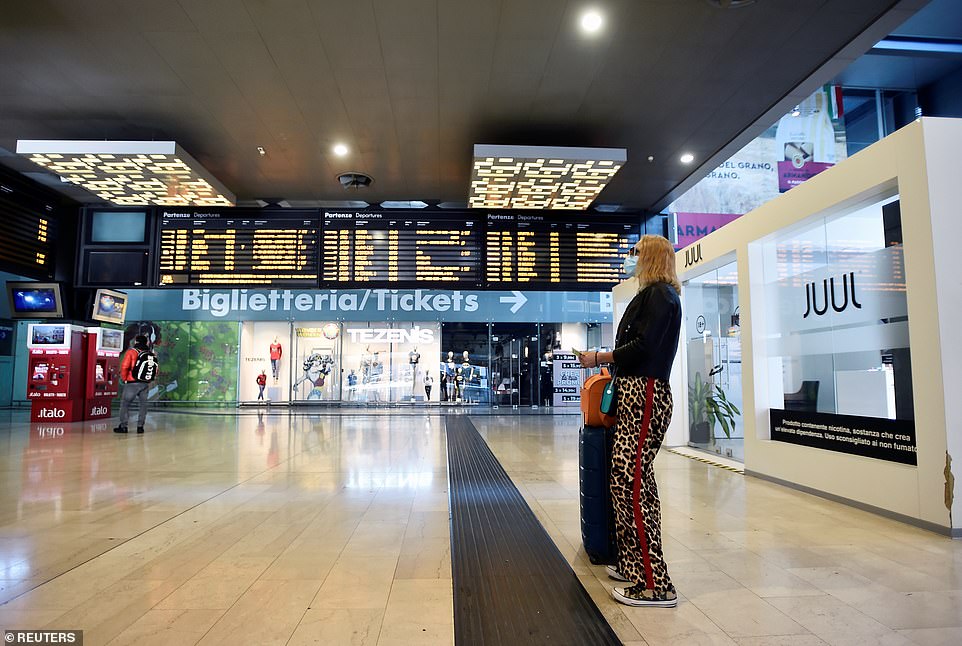 A woman wears a protective face mask at Milan’s Porta Garibaldi railway station today, after it was announced that the area would be under quarantine 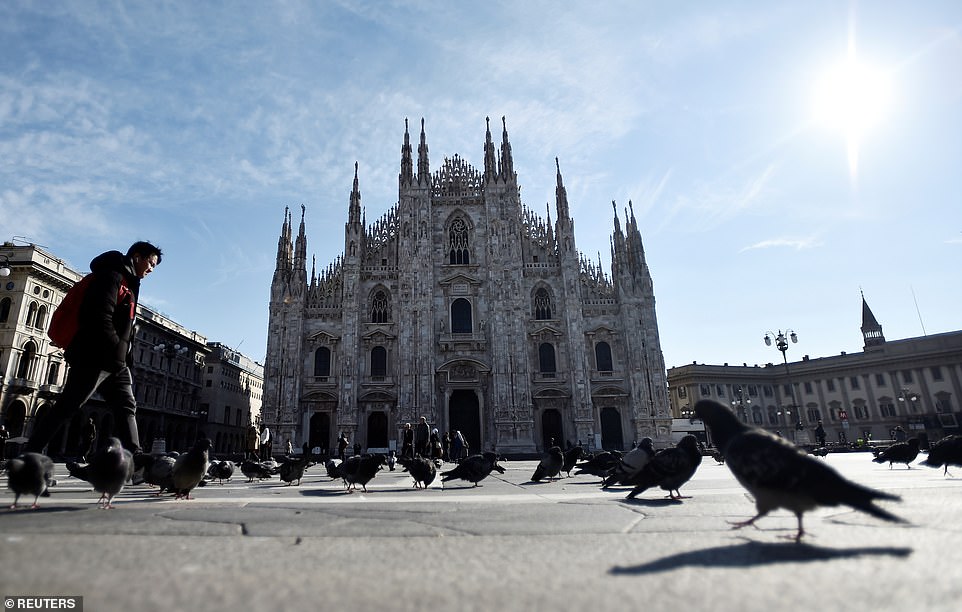 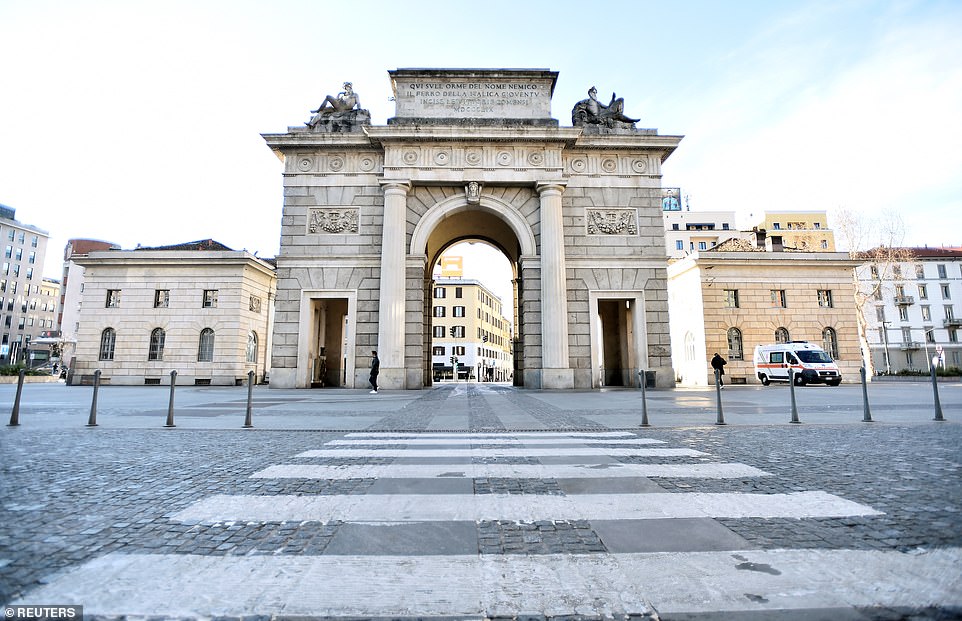 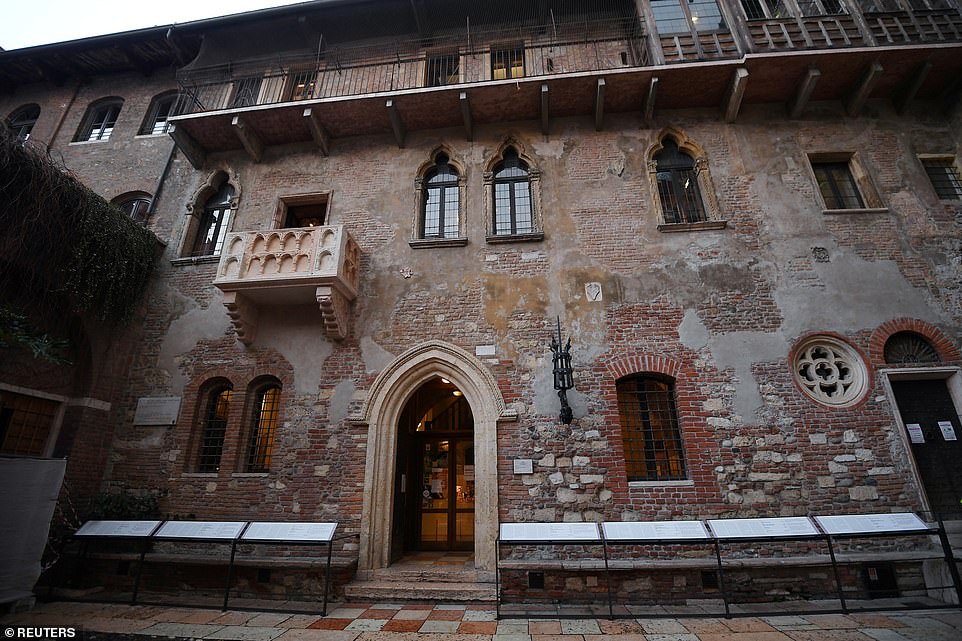 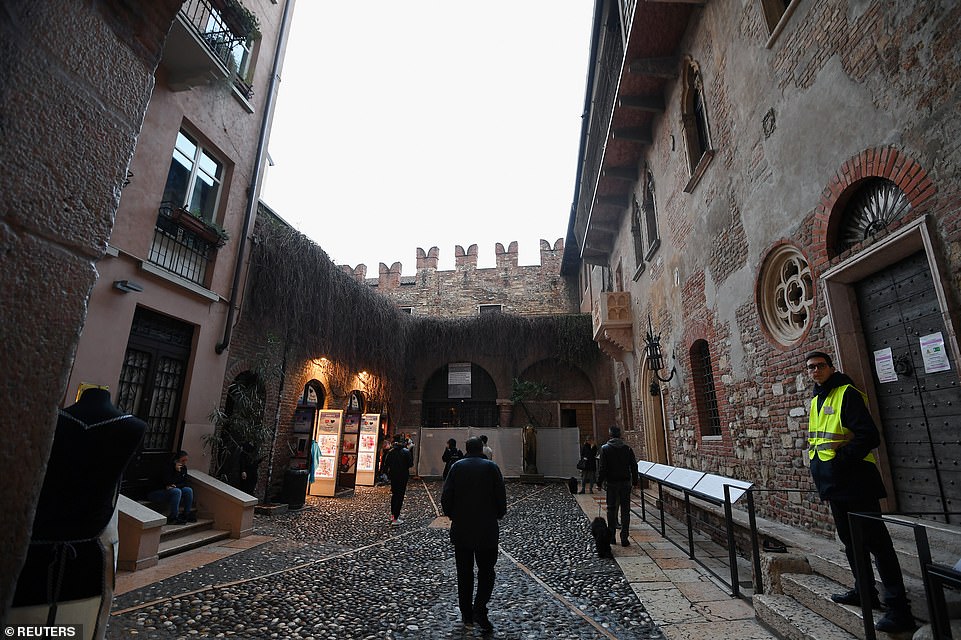 ‘Exceptions will be allowed only for proven professional needs, exceptional cases and health issues.’

It comes as the leader of one of Italy’s ruling parties tested positive for coronavirus marking the first senior politician to catch the bug in the nation.

Nicola Zingaretti is leader of the Democratic party and rules as part of a coalition with Five Star Movement.

There was chaos and confusion hours before Mr Conte signed the decree, as word spread that the government was planning the quarantine. 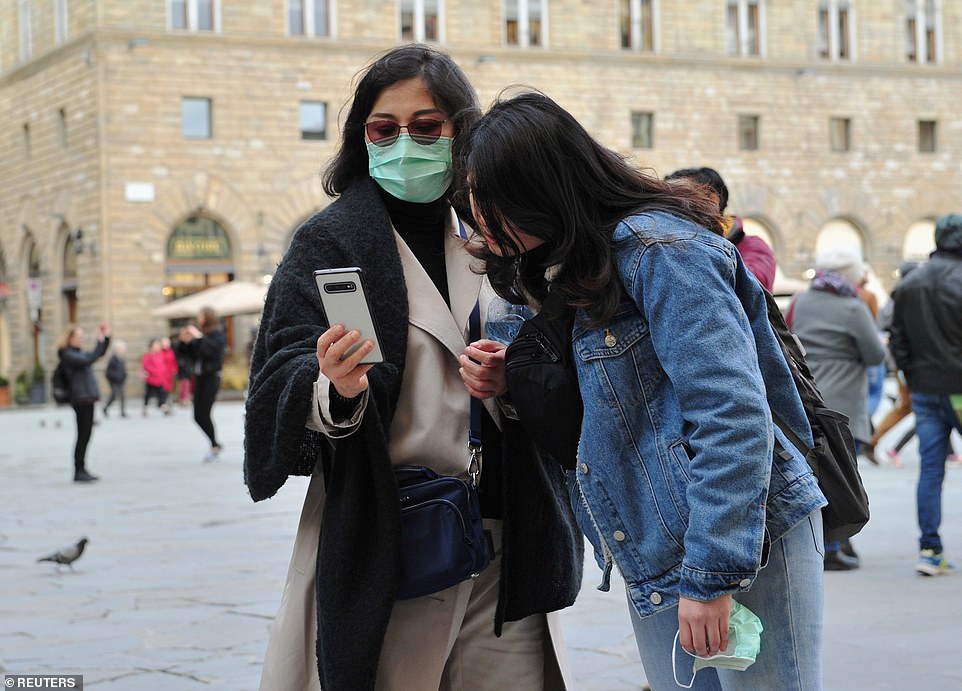 Another 36 people also died as a result of the virus, taking the total to 233 in the biggest outbreak in Europe. Pictured: Women wear protective masks in Florence 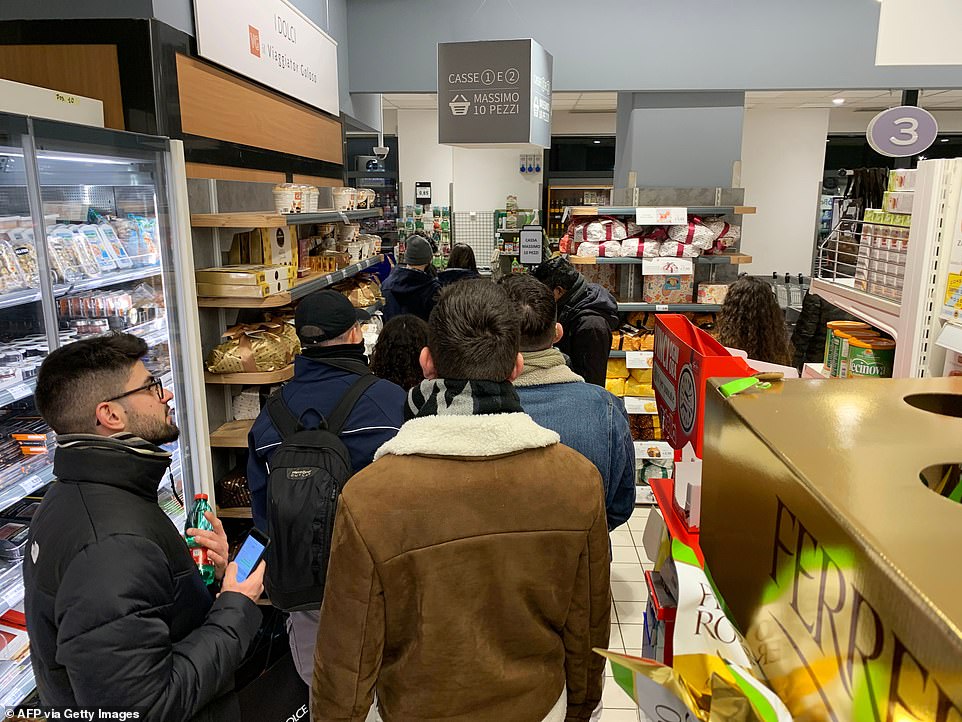 Travellers with suitcases, wearing face masks, gloves and carrying bottles of sanitising gel shoved their way on to trains.

Some regional politicians were also taken by surprise.

Stefano Bonaccini, president of the Emilia Romagna region, said parts of the decree were confusing, and asked the premier for more time to come up with ‘coherent’ solutions.

The mayor of Asti, in the Piedmont region, posted an irate video on his Facebook page condemning Rome for not keeping regional leaders in the loop.

‘Nobody told me,’ said Maurizio Rasero, adding that he had hundreds of messages on his mobile phone from alarmed citizens.

‘It’s incredible that information that is so delicate and important would come out in the newspaper first, leaking everywhere even before local authorities learn about it.’

Other countries around the world were also limiting activities, with events and festivals called off, and travel restrictions and warnings issued. 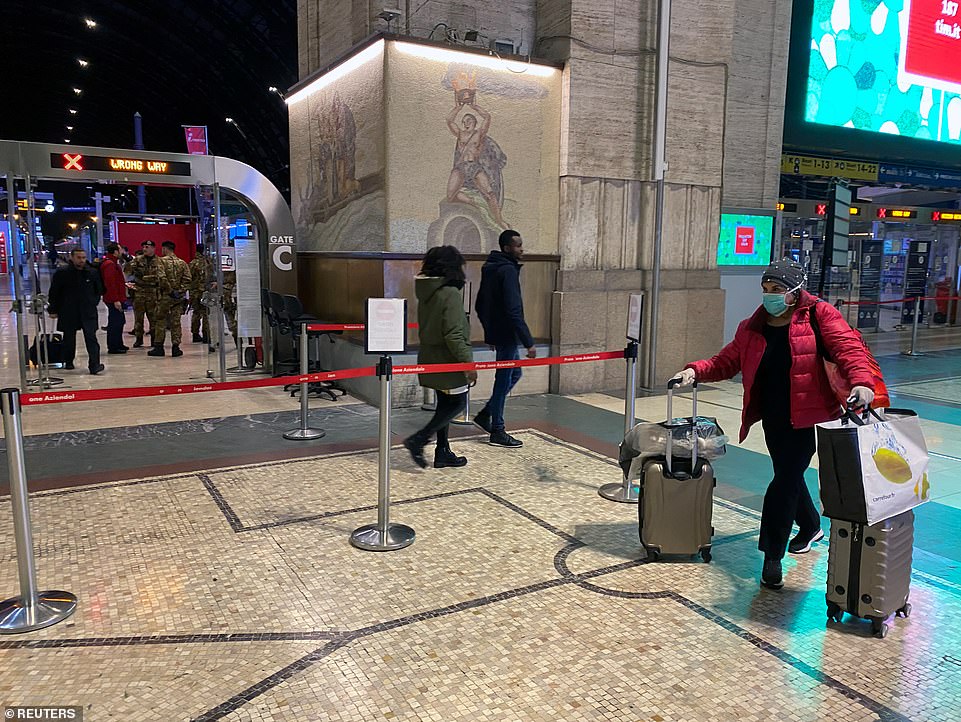 A nosedive in tourist traffic and possible disruptions to supply chains sparked fears of a worldwide economic slowdown.

Saudi Arabia banned spectators at any sports competitions, and the NBA, as well as British and Japanese sports teams, are considering doing the same, as baseball and soccer seasons are starting.

The spread of the virus has also taken a psychological toll.

Authorities and manufacturers have been trying to assure panicking consumers they do not need to hoard toilet paper, which has vanished from store shelves in various nations.

Of particular concern are passenger-packed cruise ships, many of which are confronting their own virus problems. 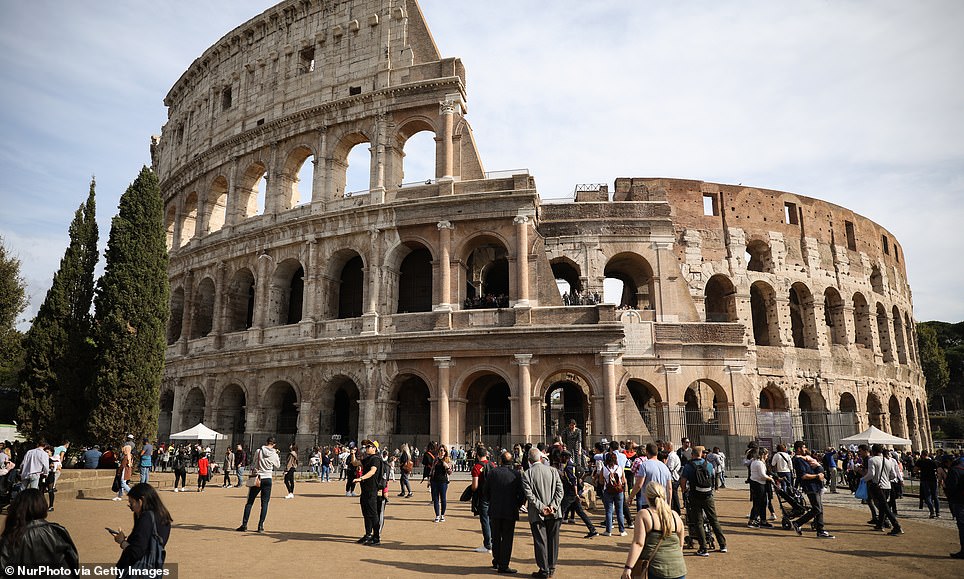 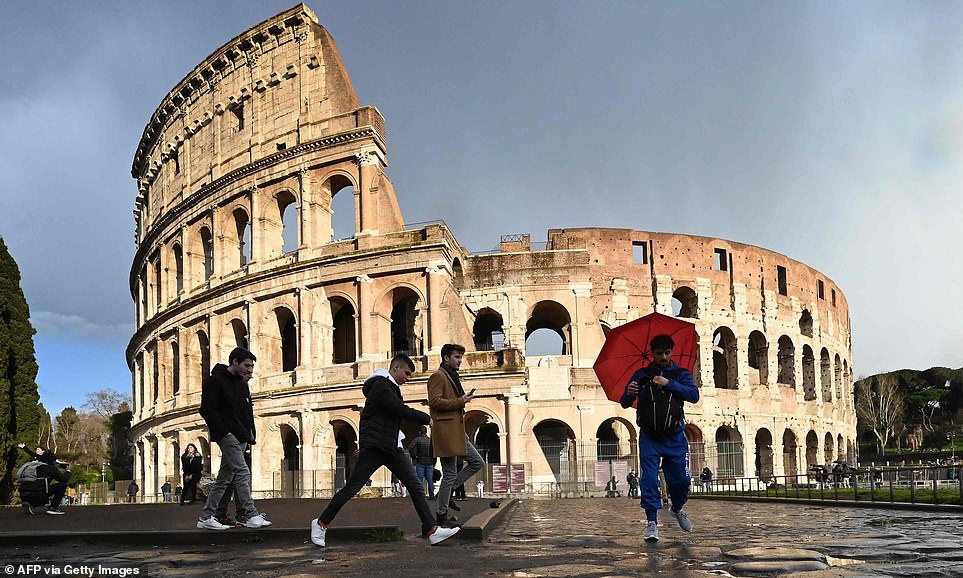 The Colosseum in Rome is pictured before and after the deadly coronavirus outbreak, which has claimed the lives of 233 in Italy so far 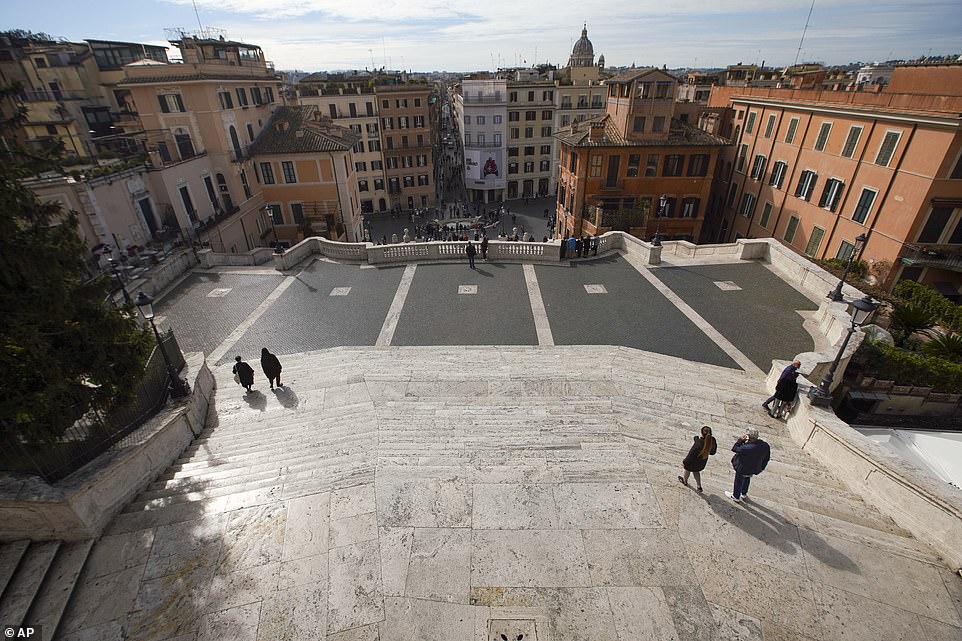 Few tourists walk along the Spanish Steps, in Rome, Thursday. Italy’s virus outbreak has been concentrated in the northern region of Lombardy, but fears over how the virus is spreading inside and outside the country has prompted the government to close all schools and Universities nationwide for two weeks 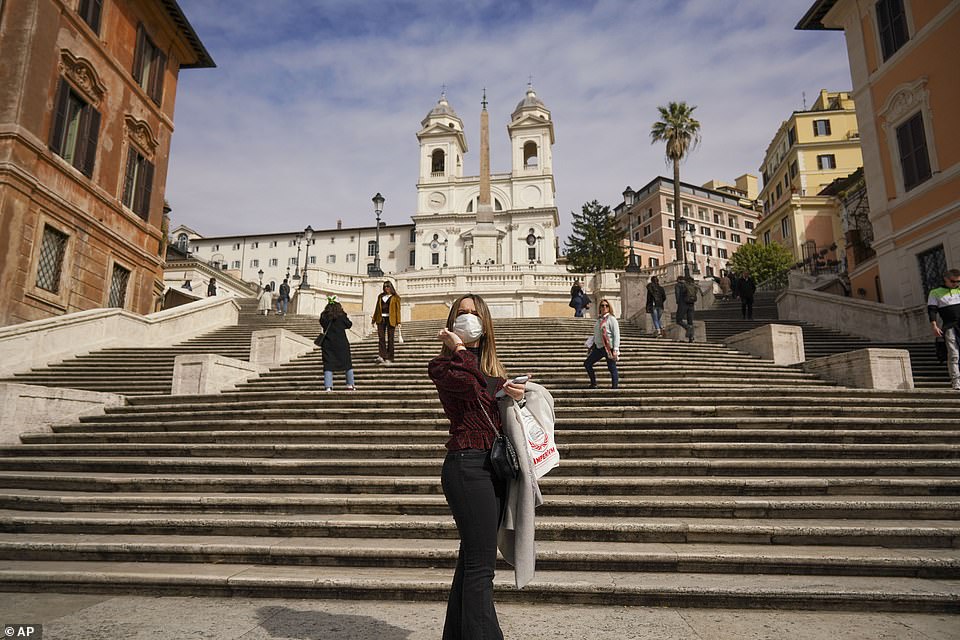 Italy is recruiting retired doctors in a bid to battle the spread of deadly coronavirus as the World Health Organisation warned all countries to make containment their ‘highest priority’. Pictured: A woman wearing a mask poses for photos at the bottom of the Spanish Steps in Rome

The Grand Princess, where 21 people tested positive for the virus, was heading for the port of Oakland, California, after idling off San Francisco for several days. There is evidence that the ship was the breeding ground for a deadly cluster of almost 20 cases during an earlier voyage.

US Vice President Mike Pence said: ‘Those that will need to be quarantined will be quarantined. Those who will require medical help will receive it.’

President Donald Trump said he would have preferred not to let the passengers disembark on to American soil, but would defer to medical experts.

In Egypt, a cruise ship on the Nile with more than 150 people on board was under quarantine in the southern city of Luxor after 12 positive tests.

Also on Saturday, the port of Penang in Malaysia turned away the cruise ship Costa Fortuna because 64 of the 2,000 on board are from Italy. The ship had already been rejected by Thailand, and is now heading to Singapore.

And in Malta, which reported its first case of the virus yesterday, the MSC Opera ship agreed not to enter the Mediterranean country’s port amid local worries – even though there are no infections suspected on board. The ship continued to Messina, Sicily, where passengers were allowed to disembark after officials reviewed medical records. 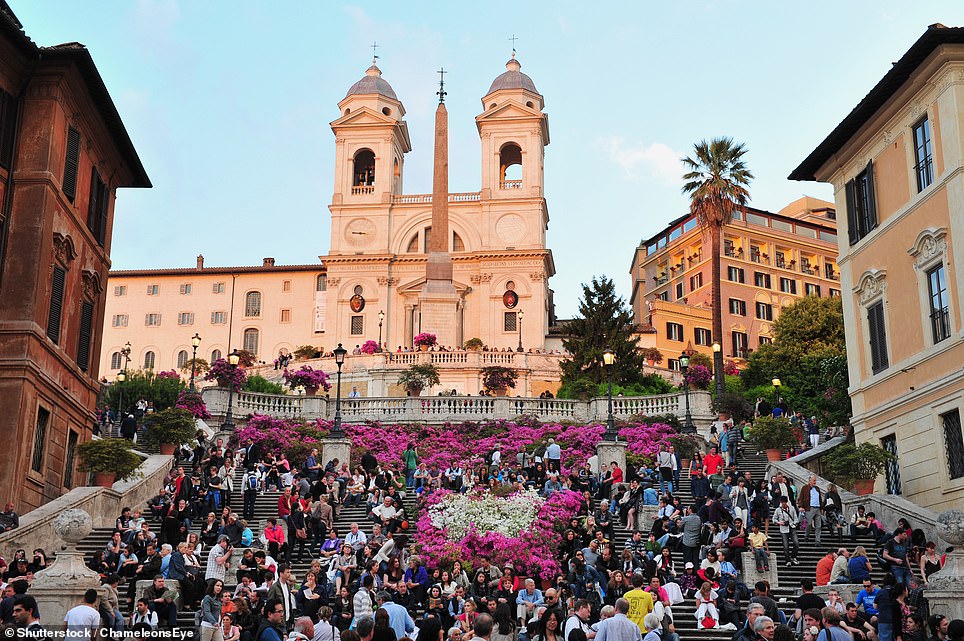 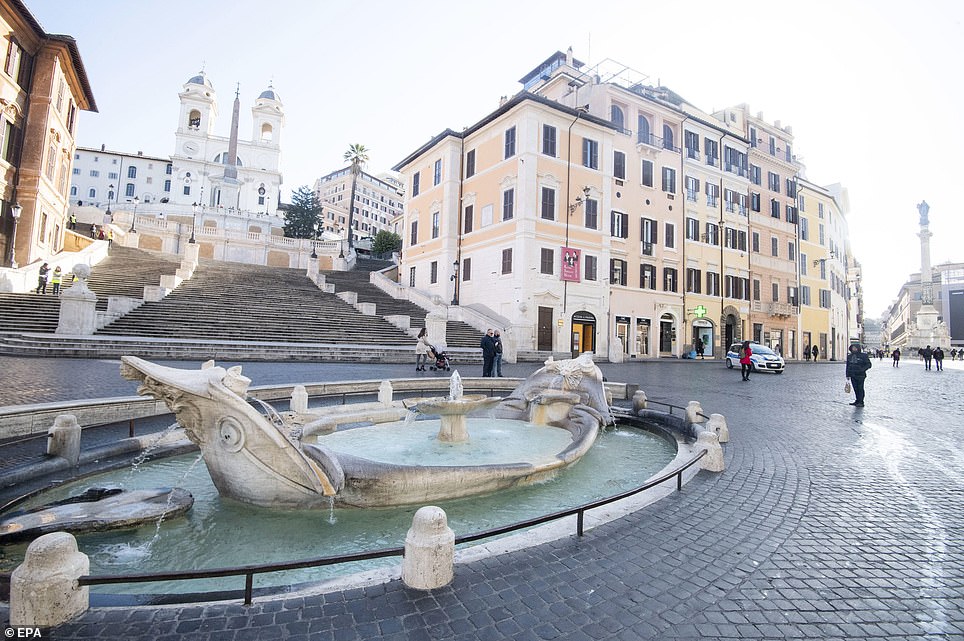 The Baroque Spanish Steps in Rome, Italy are all but abandoned after the outbreak of the deadly coronavirus, which has infected 5,883 in the country

While the global death toll has risen past 3,400, more people have now recovered from the virus than are ill with it.

As of Saturday, nearly 90,000 cases have been reported in Asia; more than 8,000 in Europe; 6,000 in the Middle East; about 450 in North America, Latin America and the Caribbean; and fewer than 50 cases reported so far in Africa.

The virus is still much less widespread than annual flu epidemics, which cause up to five million severe cases around the world and up to 650,000 deaths annually, according to the WHO.

In Iran, fears over the virus and the government’s waning credibility has become a major challenge to leaders already reeling from American sanctions. More than 1,000 infections were confirmed overnight, taking the country’s total to 5,823 cases, including 145 deaths.

South Korea, the hardest-hit country outside China, reported 93 new cases on Sunday morning, taking the total to 7,134, with 50 deaths overall.

China on Sunday morning reported 44 new cases over the past 24 hours, the lowest level since it began publishing nationwide figures on January 20, and 27 new deaths.

But while infections were increasing more slowly, the country was struck by a fresh tragedy: A hotel used for medical observation of people who had contact with coronavirus patients collapsed on Saturday, killing at least four people.

In the United States, the US Centres for Disease Control and Prevention urged older adults and people with severe medical conditions to ‘stay home as much as possible’ and avoid crowds. 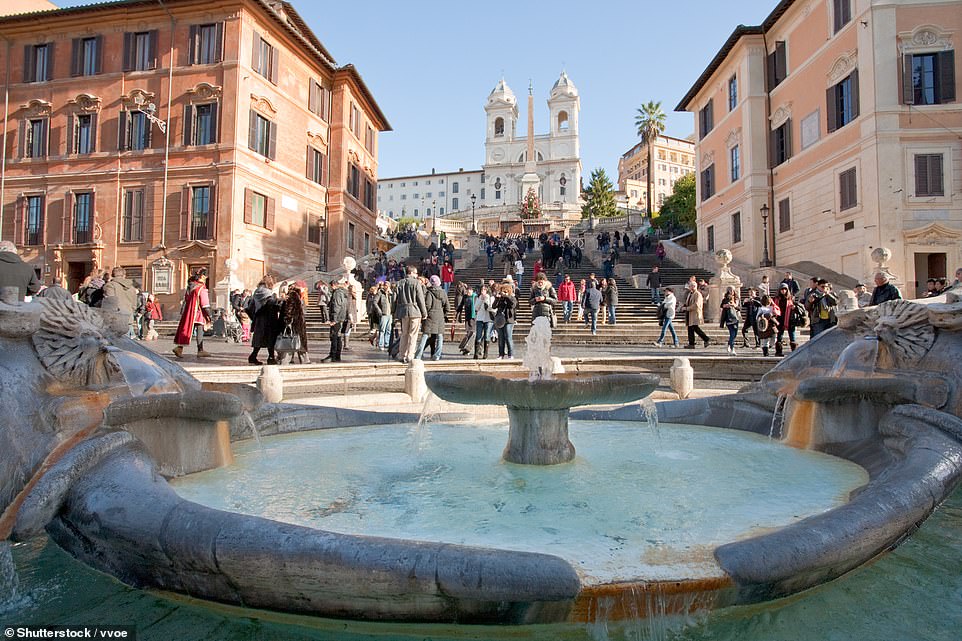 The new set of national emergency measures is due to be released tonight, which will ban entry to, and exit from, the entire Lombardy region around Milan to limit the spread of the coronavirus as well as areas around and including Venice and the northern cities of Parma and Rimini. Pictured: The empty Spanish steps in Rome 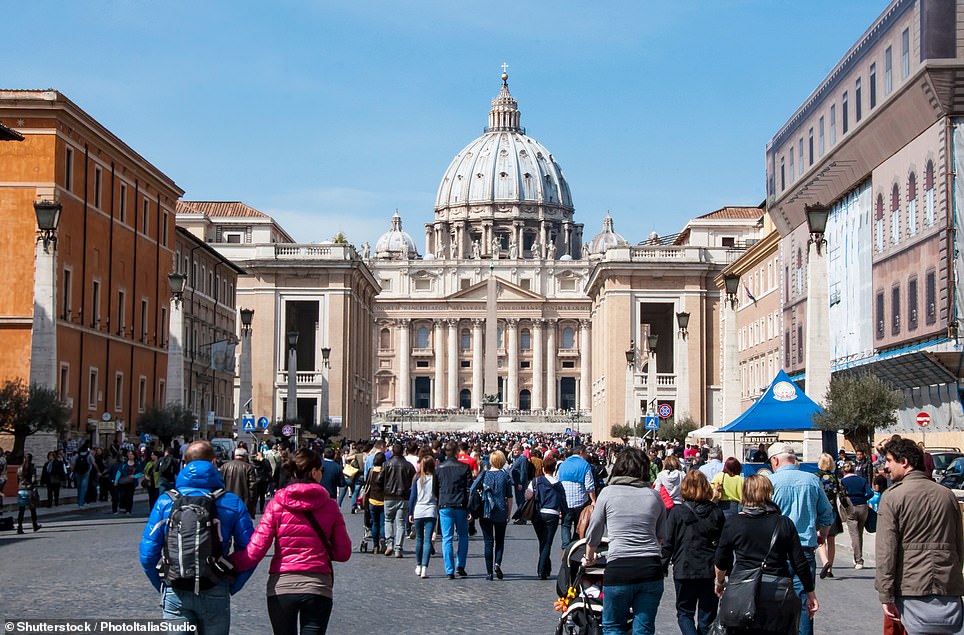 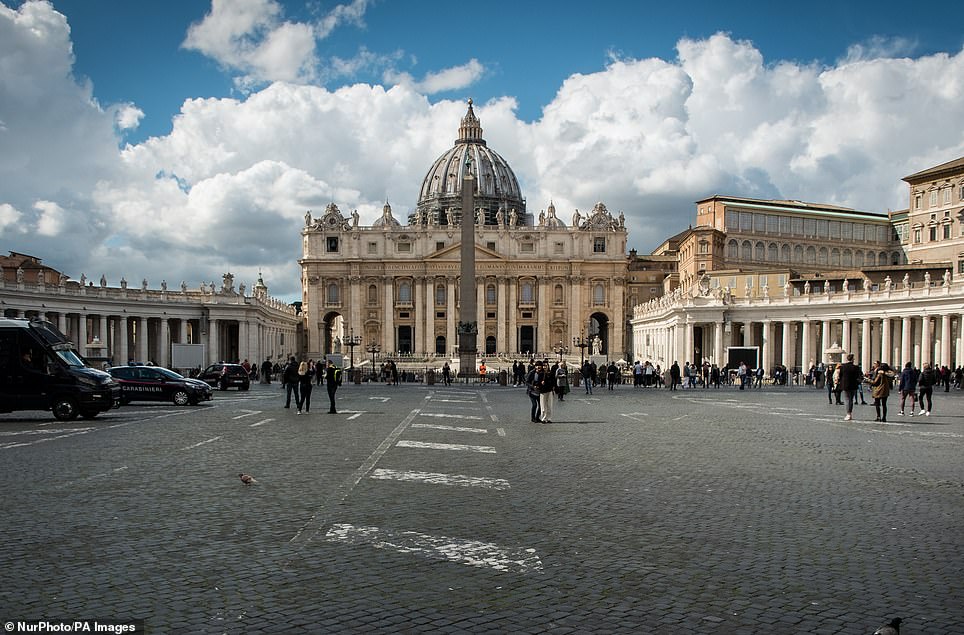 St Peter’s Square is pictured both before and after the outbreak of the deadly coronavirus, which has killed most people in Italy, outside of China

The number of deaths linked to coronavirus in Washington state reached 16, although that figure could be higher, based on figures released by the nursing home at the centre of the outbreak.

The Life Care Centre of Kirkland said on Saturday that, since February 19, 26 of its residents have died. Typically, about three to seven residents die at the facility each month.

Even islands in the middle of the Indian Ocean have not been spared, with the tiny archipelago nation of the Maldives reporting its first cases. Health authorities there locked down two of its tourist resorts after two expatriate workers tested positive for the coronavirus. 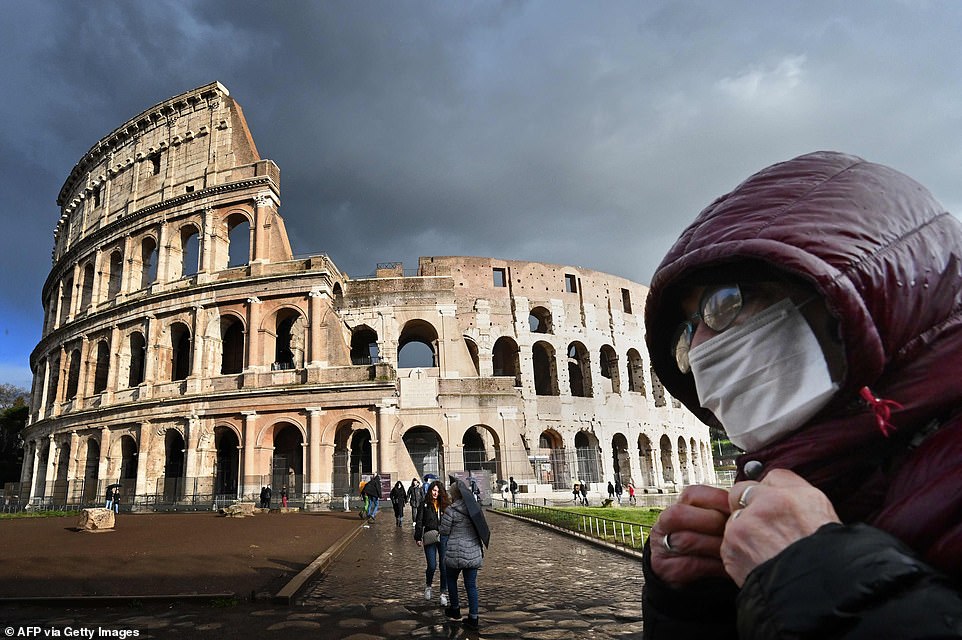 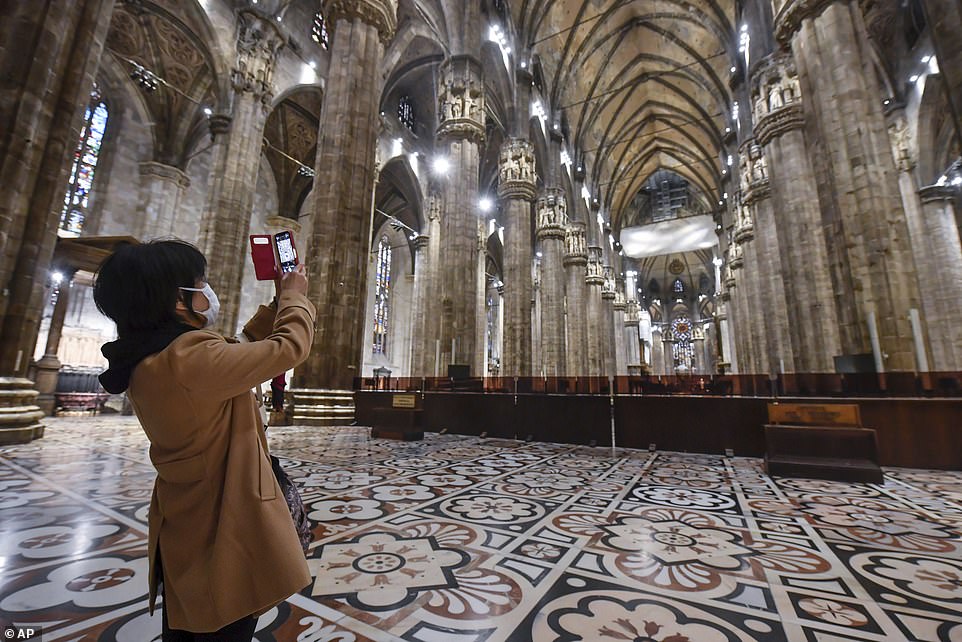 Italy has seen the biggest coronavirus outbreak in Europe with 197 deaths and more than 4,600 cases. Pictured: A tourist wearing a face mask takes pictures inside the Duomo cathedral in Milan 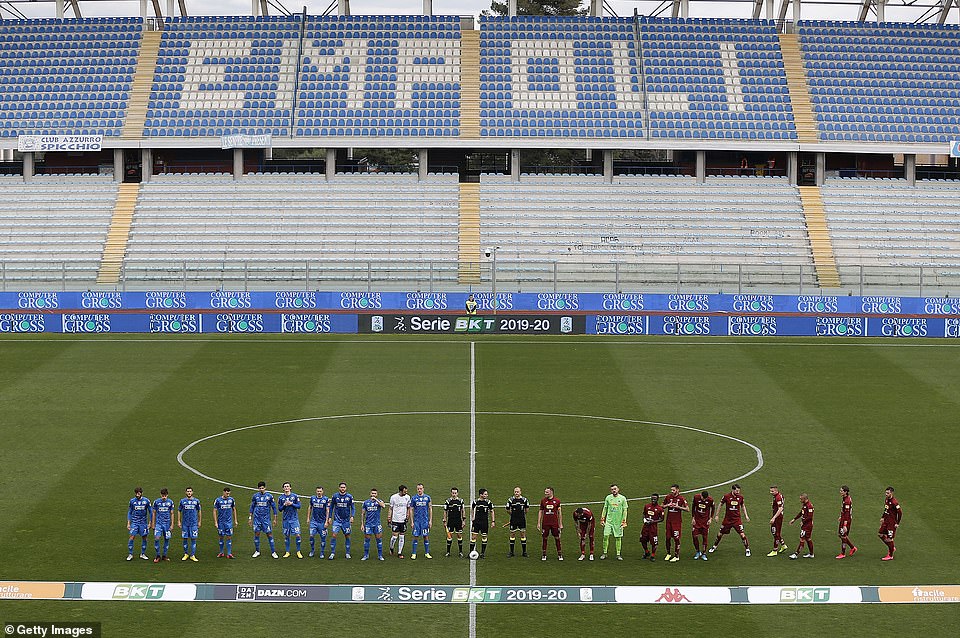 A general view during the Serie B match between Empoli FC and Trapani at Stadio Carlo Castellani today in Empoli, Italy 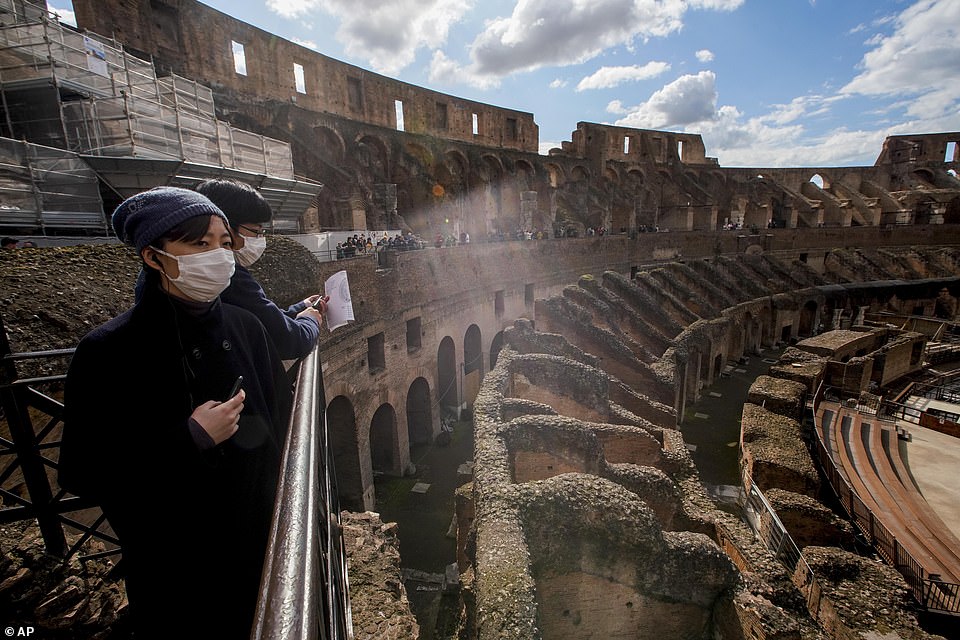 Tourists visit the Colosseum, in Rome, today.  People in hard-hit Lombardy, and 11 other affected regions, are being asked not to enter or leave, and to avoid moving around the areas except for essential working needs and emergencies

It comes as the WHO told all countries to make containment ‘their highest priority’ as the global death toll reaches 3,000 with more than 100,000 confirmed cases.

The WHO called the spread of the coronavirus ‘deeply concerning’.

Yesterday, the Italian government revealed they would draft in retired doctors to battle the crisis.

The decision to bring in 20,000 additional staff to fight the escalating epidemic was one of several measures adopted by the government during an all-night cabinet meeting after the country reported 49 more deaths in one day.

The Italian government said its medical recruitment drive should help double the staff of hospitals’ respiratory and infectious disease departments.

It should also increase the number of intensive care beds from 5,000 to 7,500 in the coming days.

An iconic balcony scene of Romeo and Juliet, virtually deserted as Italy battles a coronavirus outbreak, in Verona, Italy today 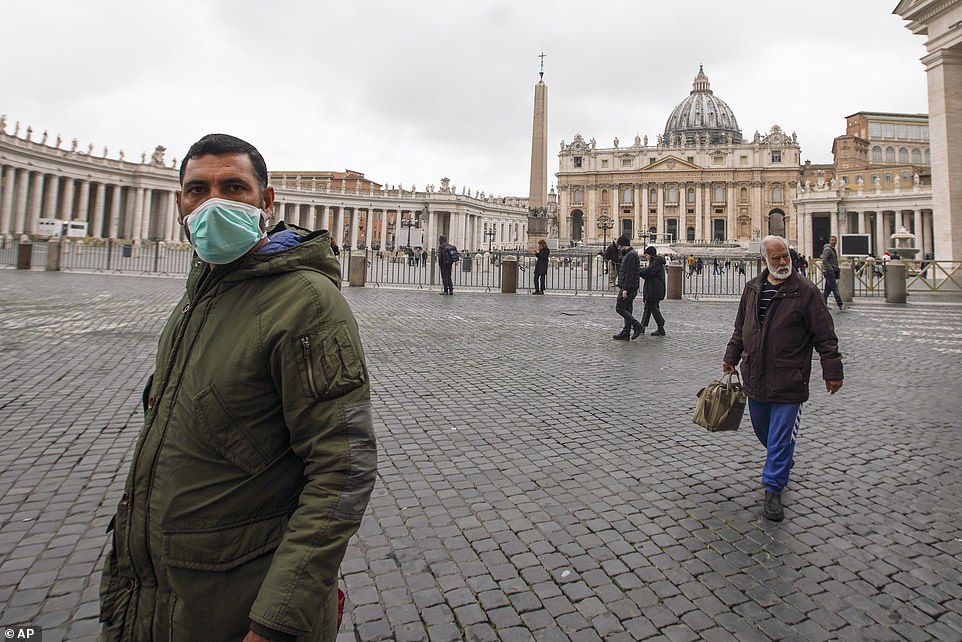