UK and US media evoke the spirit of the Second World War during the coronavirus pandemic by using language relating to force and combat, a study reveals.

The use of a ‘war rhetoric’ – particularly verbs to invoke a ‘call to action’ – are abundant in news reports on British and American news sites, including the Daily Mail.

This is likely because Germans don’t associate the Second World War with victory and instead relate it to Nazi rule – possibly the darkest period in their history.

The use of war rhetoric is designed to raise morale during the current difficult period of social distancing, economic uncertainly, increasing unemployment and an escalating death rate.

But researchers claims the UK and the US – which are thought likely to end up with the highest COVID-19 death rates when the pandemic is over – could eventually move away from military analogies.

Chart shows collocations of coronavirus in the UK press. Only verbs and modifiers were included since they were the largest grammatical categories of collocations. As can be seen, the words that occur in the vicinity of coronavirus are often words taken from the domain of warfare or violence 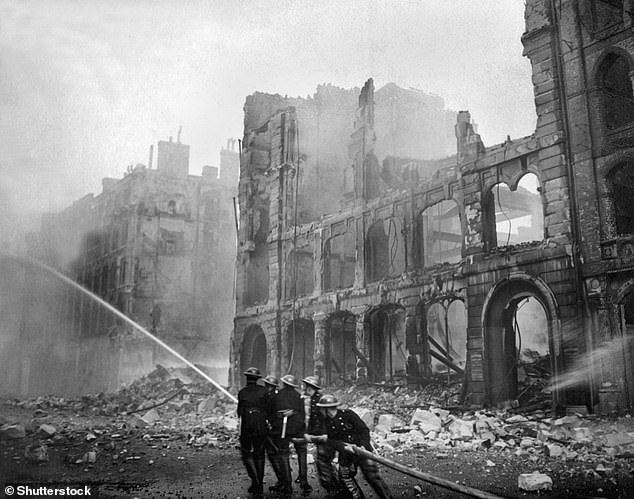 UK newspapers have been ‘competing with each other to frame the virus in terms of war and combat’, linguists at the University of Reading have said. Although the use of such language could be to help keep up the morale during these testing times, the research team claim more scientific language as seen in German coverage will be more successful to beat COVID-19 . PIctured, firefighters putting out a blaze in London after an air raid during The Blitz in 1941

‘As soon as it became obvious that the new coronavirus posed a serious threat to public health in Britain, newspapers across the country were competing with each other to frame the virus in terms of war and combat,’ said Dr Sylvia Jaworska, associate professor in Applied Linguistics at the University of Reading.

‘The reality is that the coronavirus doesn’t distinguish between “friends” and “enemies” and no matter our physical strength or character they will not be enough to slow the death rate on their own,’ said Dr Jaworska.

‘Clear communication, along with effective testing and treatment options, will be what wins the fight against COVID-19.’ 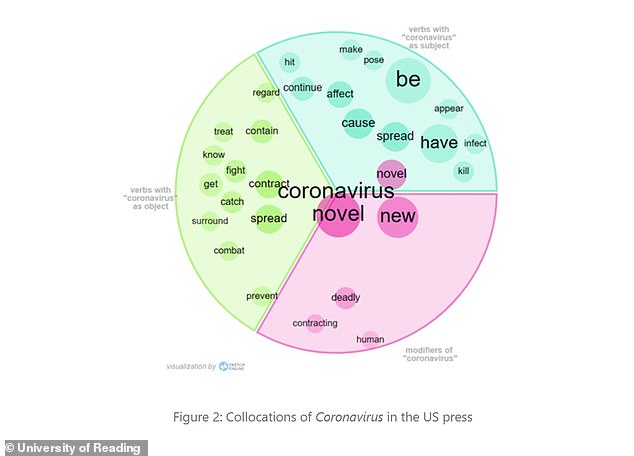 A similar situation, although with fewer instances of war and fight references, can be observed in this chart of US press coverage, including words such as ‘fight’, ‘combat’, ‘kill’ and ‘hit’

EXAMPLES OF WW2-STYLE LANGUAGE IN UK AND US MEDIA

The Sun urged Brits ‘to invoke the spirit of the Blitz to beat the coronavirus’ (March 17).

The New York Times asked whether ‘Our fight against coronavirus [is] worse than the disease?’ (March 20) and declared that the US is ‘not winning the fight’ (March 30).

The researchers also created word charts that illustrate the frequency of words used in UK, US and German coronavirus coverage.

In the UK, newspapers have used war references, such as ‘battle’, ‘combat’, ‘defeat’ and ‘fight’ or even indicators of physical violence including ‘hit’ and ‘tackle’ relating to the pandemic.

This includes The Daily Mail, which started a trend on March 11 by calling on the public to summon the ‘Blitz spirit’ to face coronavirus because ‘we are at war and need to deal with the outbreak in the same way our predecessors’.

‘This type of rhetoric, mostly verbs to imply action, seems to be suggesting that the measures required to slow the pandemic are similar to those needed to win a war or fight,’ said Dr Jaworska.

In the US, on March 20, the New York Times started using similar language, including a reference to ‘our fight against coronavirus’.

The slight time difference is likely due to the US government’s slow response to the seriousness of the global health crisis, researchers said. 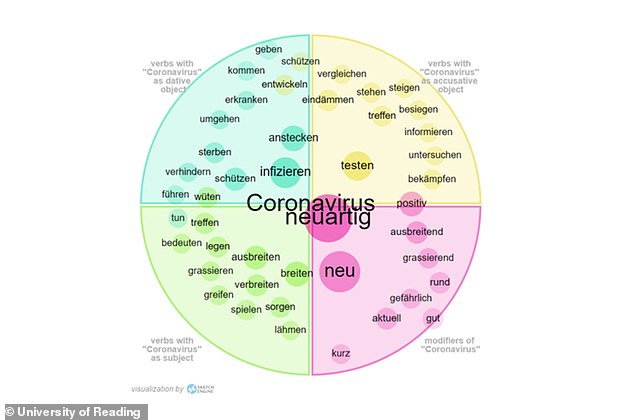 Researchers said German coverage relating to science was ‘conspicuously absent’ from word maps for the UK and US – these include ‘informieren’ (to inform), ‘untersuchen’ (to investigate/test), ‘entwickeln’ (to develop) and ‘vergleichen’ (to compare) and the verb ‘testen’ (to test). ‘All the verbs point to the significance of an approach grounded in science and also communication about the disease,’ they said.

Using war metaphors can mobilise public health efforts – however, it can have an opposite effect for those on the NHS ‘frontline’ who are feeling pressure, Dr Jaworska said.

This is especially the case if health workers who are risking their lives in service of their country feel they are not ‘winning the battle’.

This reflects Germany’s focus on scientific testing and understanding of the virus and seeing as a disease rather than ‘the traditional framing of an enemy’, the linguists have claimed. 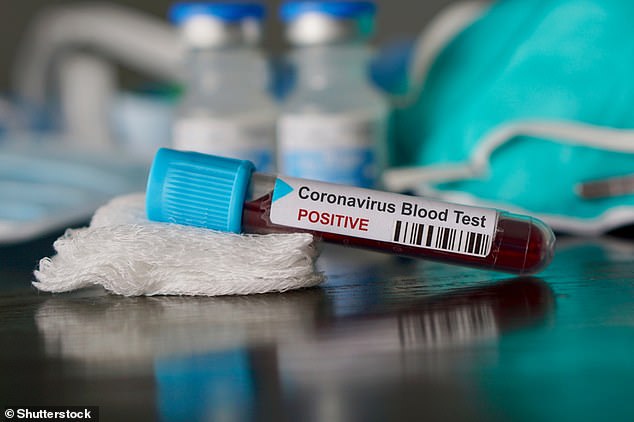 Testing and developing treatment options for COVID-19, as demonstrated in Germany, as well as clear public communication, will be more successful than wartime-like language, the linguists have said in their research paper

Germany also began mass testing for COVID-19 ahead of other European countries and is allowing some non-essential shops to reopen as part of a gradual easing of its lockdown measures.

War rhetoric and words coined during the reign of the Nazis or used in its media coverage at the time – such as ‘totaler krieg’ (total war) and ‘endlösung (final solution’ – are not generally still in use.

‘It would indeed be rather odd, to say the least, to see the German press evoking the Blitz spirit during the COVID-19 pandemic,’ the team write in their study, which has been published in Viral Discourse.

Researchers analysed thousands of articles about the coronavirus and  COVID-19 published between January 7 and the end of March 2020 from press coverage of the pandemic in the UK, US and Germany.

January 7 was the day Chinese authorities officially reported the presence of a novel virus.