Dover officials handed out face masks and blankets to 49 migrants who were intercepted crossing the Channel in three boats today.

The migrants were picked up by Border Force off the Kent coast near Dover as they attempted to cross the English Channel in small dinghies between 5am and 6am.

Photographs captured several of the arrivals as they travelled to shore on board a Border Force vessel, many wearing surgical face masks and covered in blankets.

The migrants, of whom 43 were men and six were women, were later seen lined up at the Port of Dover as they spoke to British authorities.

The latest arrival brings the total number of migrants to make the dangerous crossing this year to an estimated 900 – around half the 1,850 who made it to Britain throughout 2019.

More than 600 people have made the journey since Britain’s coronavirus lockdown began on March 23, the BBC said, with 476 attempting the crossing in April alone.

The Home Office confirmed those who arrived today will be transferred to immigration officials and will be interviewed in line with immigration rules.

Three boatloads of migrants from France were brought ashore last week after being intercepted by British authorities on the Channel.

A young child was among around 13 migrants to have made the perilous crossing in one small boat over the world’s busiest shipping lane on Monday.

The migrants were spotted in a boat off the Kent coast, sparking a rescue mission involving a coastguard helicopter, lifeboats and Border Force vessels on April 27.

All 13 were taken to Dover to be processed by Border Force officials, who were seen wearing face masks due to the coronavirus pandemic.

None of the migrants were being tested for coronavirus and were instead observed for symptoms, the Home Office confirmed. 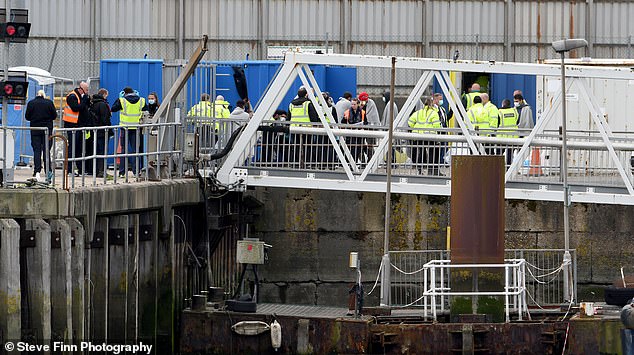 The migrants, of whom 43 were men and six were women, were later seen lined up at the Port of Dover as they spoke to British authorities 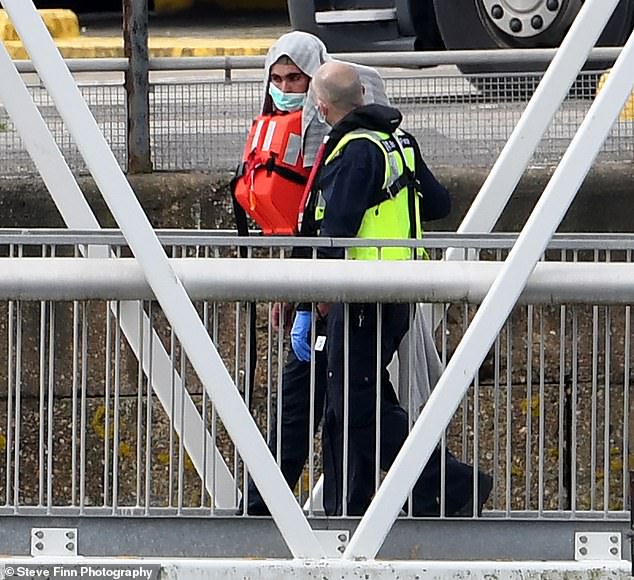 Photographs captured several of the arrivals as they travelled to shore on board a Border Force vessel, many wearing surgical face masks and covered in blankets

A Home Office spokesman said: ‘All individuals will be brought to Dover and, in line with established processes, will be assessed to establish whether there are any medical requirements. No issues reported.

‘All will be transferred to immigration officials.

‘They will be interviewed and their cases will be dealt with in line with the immigration rules, transferring to detention where appropriate.

‘In line with Public Health England guidance, Border Force and all operational staff have the relevant personal protective equipment available to them.’

There were unconfirmed reports that two further vessels were picked up in the Channel on the same day. 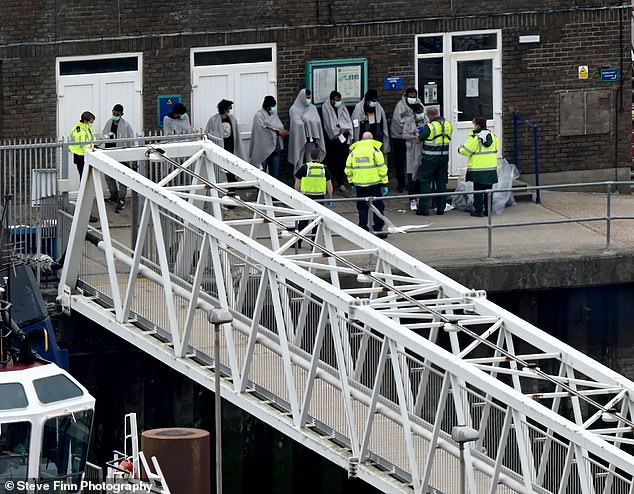 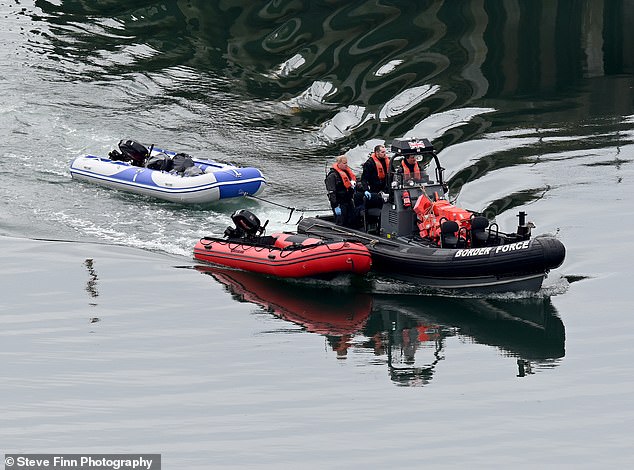 More than 110 migrants also arrived on the south coast in just two days last week – 76 on Friday and 35 on Saturday.

Tony Eastaugh, Home Office director for crime and enforcement, said: ‘Those facilitating these illegal crossings and the criminals behind this trade are breaking the law.

‘If someone facilitates an illegal crossing, we will enforce the law and seek to return those with no right to be in the UK.

‘We are working around the clock each day with the NCA [National Crime Agency] and French law enforcement agencies to arrest and dismantle organised crime gangs in France.

Last month, Home Secretary Priti Patel said she was ‘determined’ to stop illegal Channel crossings, adding: ‘I will not stand by whilst malicious criminals prey on the vulnerable.’ 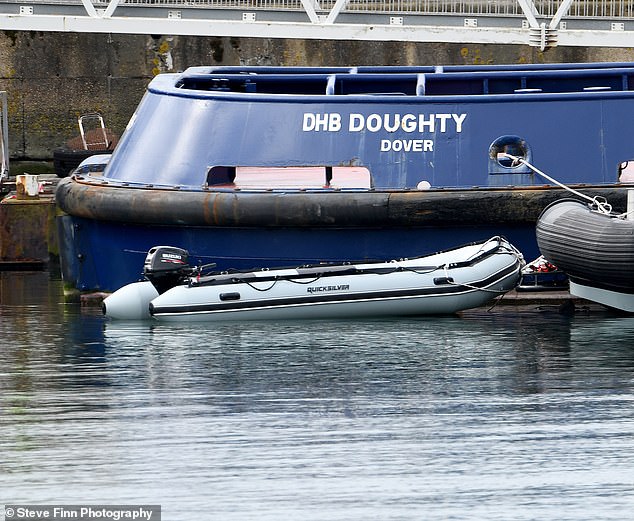 More than 600 migrants have made the journey since Britain’s coronavirus lockdown began on March 23, the BBC said last week, with 476 attempting the crossing in April alone

Meanwhile, Dover MP, Natalie Elphicke, has called for those attempting to enter the country illegally to be sent back to France or be put in an immediate 14 day quarantine.

She said: ‘France’s lockdown means people need permission just to walk the dog. So how come hundreds of migrants can still pile into small boats and illegally motor into Britain?

‘We know that the coronavirus has infected the French camps.

‘The French have been paid tens of millions of pounds to stop these dangerous journeys being made – it’s vital the Home Office make the French honour their obligations in order to stop the further spread of the virus into Britain.

‘I have long said that anyone seeking to break into Britain should be immediately returned to France.’