The North West passed London as the epicentre of the UK’s coronavirus outbreak today, with more people in hospital with the illness than in the capital.

In contrast, patients with the illness in the North West rose to 2,191, the first time a region’s total has surpassed the capital since the height of the outbreak.

Both totals are significantly lower than the respective peaks in either region.

London’s number of coronavirus patients peaked at 4,813 on April 8, the highest daily total in the UK. Prime Minister Boris Johnson was among the patients battling the virus in hospital at the time.

While the North West’s peaked at 2,908 on April 3, the third highest in the UK after the capital and the West Midlands.

London remains the area of the UK with the highest number of overall cases at 24,828, while the North West is second with 20,125.

It comes as a new interactive map revealed just how different areas of the UK were affected differently by the virus.

Certain regions such as London and the Midlands have suffered the brunt of the pandemic while larges swathes of the country have escaped relatively unscathed.

The map, from Office for National Statistics data, shows outside of London, twenty-four towns in Cornwall have not incurred any Covid-19 deaths, with the county suffering just 14 deaths per 100,000 people.

One expert told MailOnline the data lends weight to a growing chorus of voices urging the government to ease curbs in areas with the least infections first. 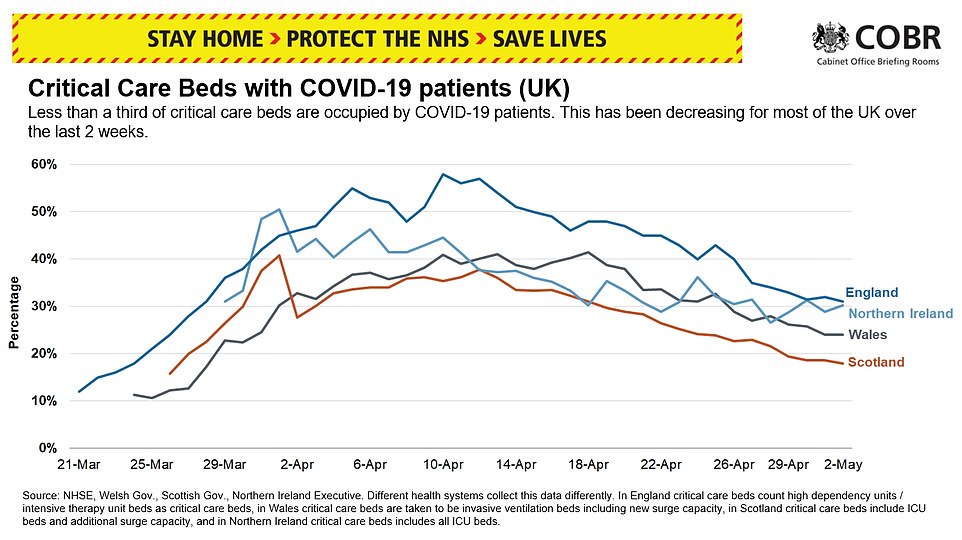 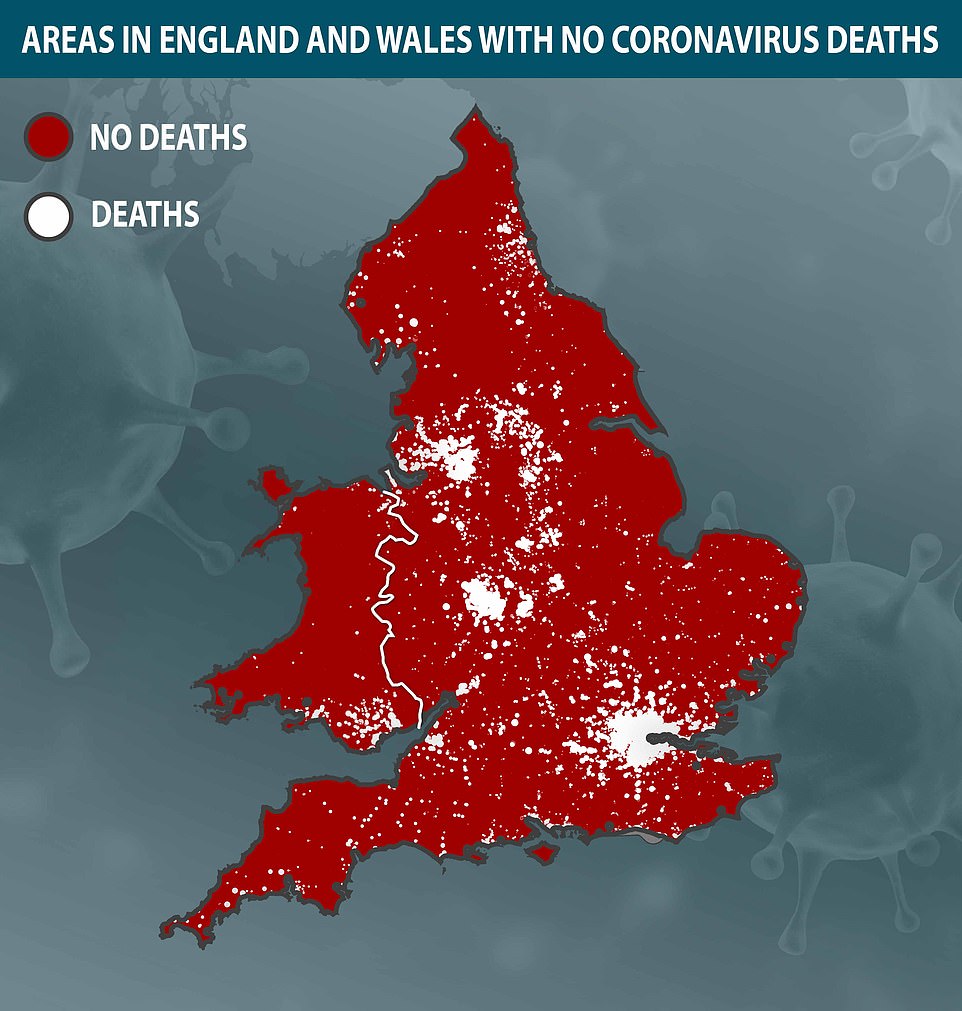 The interactive ONS map shows the bulk of virus deaths are in densely populated cities and their transport routes to one another, while, towns furthest away from cities appear to be avoiding the worst of the crisis.

In the East of England, at least 23 local authorities have not recorded any coronavirus deaths in Suffolk, and 21 in Norfolk.

There are nine towns and villages where residents are yet to fall victim to the disease in the Welsh county of Conwy, seven in Pembrokeshire, five in Gwynedd and five in Ceredigion.

In the New Forest national park in Hampshire there have been no recorded deaths in the Milford and Lymington south area, while in neighbouring Dorset, places such as Bovington, Wool and Lulworth have no recorded Covid-19 deaths.

There have been growing calls for lockdown to be eased on rural communities that have not been impacted by the pandemic.

Michael Gove last week there was some ‘scientific justification’ for trialling the easing of lockdown measures in island communities, such as the Outer Hebrides – although this has sparked a backlash from locals furious at suggestions they be used as the nation’s guinea pigs. 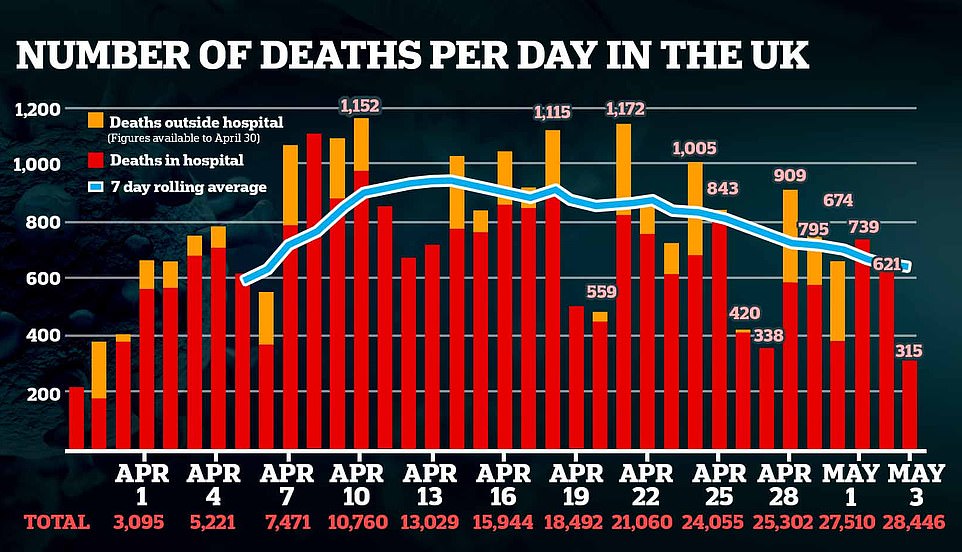 The UK has announced 315 new coronavirus deaths today, bringing total fatalities to 28,446 and putting the country on course to become the hardest hit in Europe 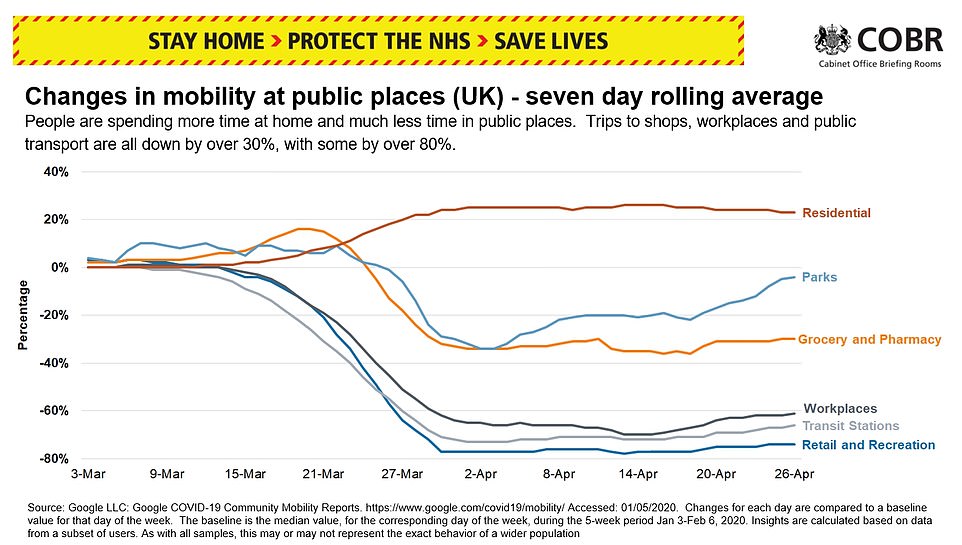 Prof Paul Hunter, Professor in Medicine, University of East Anglia told MailOnline there is an argument for relaxing the lockdown in more rural areas that have been less impacted by the pandemic.

He said: ‘There are a number of factors that impact R0 (the average number of people an individual can expect to infect) and one of those is population density.

‘In the countryside you may only see five people a day, but in London if you could spend time with several hundreds of people a day such as seeing them on the underground. A lot of the variation is due to the fact R0 is greater in an area of higher population density.’

Professor Hunter added: ‘There is something to be said about areas of the countryside not having as intense a lockdown. From that perspective there are technically a number of areas where the spread is not very high, and have not been impacted as severely as the main urban centres. But the problem with that is you see people in rural areas on Facebook having a good time, and you will probably feel quite annoyed.’

Britain announced 315 new coronavirus deaths today, bringing total fatalities to 28,446 and putting the country on course to become the hardest hit in Europe.

The UK’s toll is now only 264 behind Italy – the continent’s original epicentre – which it will likely overtake tomorrow to suffer the second highest fatalities in the world after the United States.