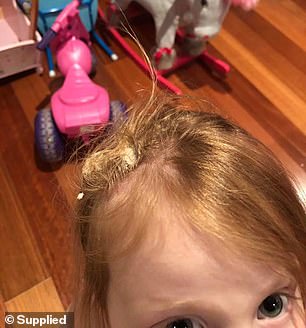 A mother has removed all traces of chewing gum from her daughter’s hair by coating it in a thick layer of peanut butter.

Marnie Pollock was horrified when her daughter Aria stole a packet of chewing gum from her handbag and stuck a large wad in her hair while her back was turned.

Terrified she would have to shave the front of the three-year-old’s head, the mother from Sydney begged for help in a parenting group on Facebook.

Ms Pollock was inundated with advice from hundreds of Australians telling her to cover the gum with peanut butter and gently brush it out.

She applied two spoonfuls of peanut butter over the gum, left it to soak for two minutes then combed it through the lengths of Aria’s hair and washed it as normal.

Ms Pollock told Daily Mail Australia she was ‘so surprised’ by how quickly it lifted the matted gum from her little girl’s head. 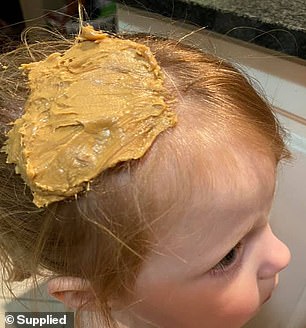 Photos showing the successful removal have been ‘liked’ almost 1,000 times since Ms Pollock shared them on Saturday, thanking people for the tip which restored Aria’s hair to perfect condition.

The home remedy is supported by science. The fatty oils in peanut butter soak between the hair and gum, loosening it from the dry strands which makes it easier to pull out.

‘These remedies are insane, I sometimes think how did someone figure out that peanut butter would get gum out of hair!’ one woman wrote in the comments.

Another said: ‘Peanut butter works every time. Been there, done that more than once.’ 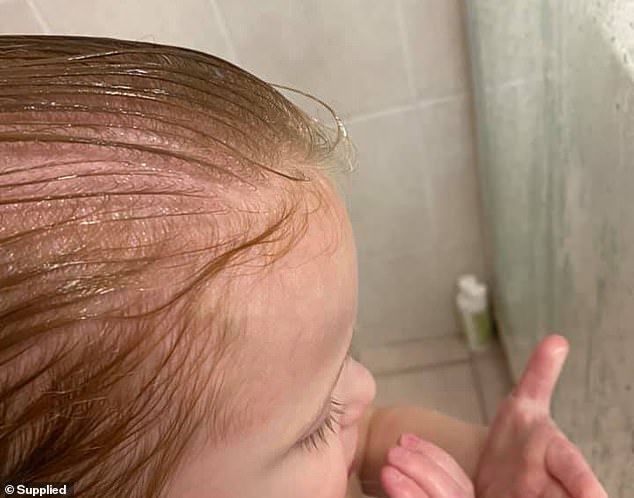 After Ms Pollock left the peanut butter for two minutes, combed it through the lengths and washed it as normal, Aria’s hair (pictured) was restored to perfect condition

The science behind peanut butter and chewing gum

To understand how peanut butter pulls gum from hair, it’s important to learn what each substance is made from and how they react when they come into contact.

Chewing gum is made from a natural gum base, usually from plants or trees, mixed with sugar syrup, food colouring and flavouring. The sticky base – which gives gum it’s chewy texture – will cling to the proteins in dry hair. Washing it with water will have no effect, because the base is ‘hydrophobic’, which means it repels and does not mix with water.

Interestingly, because of this, chewing gum will not stick to wet hair, only dry.

Peanut butter is made from ground and roasted peanuts and contains lots of oils an fats. It’s also hydrophobic.

The oils in peanut butter attract the gum base in the chewing gum, which causes the hydrophobic properties to stick to each other more easily than the proteins of dry hair.

The oils in peanut butter soak between the hair and gum, loosening it and making it more pliable.

Peanut butter works best when coated over the entire gum surface and massaged in until all the gum has lifted off.

Salad oil and mayonnaise work the same way because of their oily, hydrophobic bases.

Others said baby oil, olive oil, coconut oil and mayonnaise work just as well because of their oily bases which draw stickiness from gum and loosen it from dry hair.

One woman said she used cooking oil on her daughter’s hair last week after she stuck multiple pieces of gum into her fringe when she was out of the room.

‘Put heaps on leave it sit for 2 minutes and then spread apart and softly pull out with finger nails,’ she said.

Many suggested rubbing ice over the chewing gum for five to 15 minutes which reduces stickiness by hardening the base, allowing gum to slide easily out of hair.

Some advised pouring Coke over the affected area, saying the acidity of the drink quickly dissolves the gum’s sticky base.

The peanut butter removal trick was made famous in a 1996 episode of The Simpsons called ’22 Short Films about Springfield’, in which Bart accidentally throws chewing gum in sister Lisa’s hair.

An unimpressed Marge tries to remove the gum by applying peanut butter and mayonnaise to her head.