The author of a new book about Michael Jackson claims he saw a ‘worrying’ video of the singer playing bizarre games with children – in which one of the youngsters allegedly had his arms wrapped around a beam ‘like a martyr on a cross’.

Dylan Howard claims to have seen the home video in which Jackson allegedly stares at the boy standing on his four-poster bed before grabbing him by a T-shirt as the child spits at him.

Howard, the former National Enquirer editor involved in the newspaper’s ‘Peckergate’ feud with Jeff Bezos, told the Mirror that ‘the scene was worrying and baffling’, saying the video was full of ‘foul language’ and ‘over-the-top theatrics’ which made it ‘age-inappropriate’.

The author’s new book – Bad: An Unprecedented Investigation into the Michael Jackson Cover-Up – claims to have ‘never-before-revealed evidence and police files’ documenting the child abuse claims against the singer.

The claims were reignited by last year’s documentary Leaving Neverland in which two men alleged that Jackson abused them as children, but the singer always denied wrongdoing in his lifetime and his estate has continued to deny the allegations.

It allegedly shows two boys in the singer’s bedroom, one of them standing on a four-poster bed with his arms around a beam as though affixed to a cross.

The scene is alleged to have involved ‘panting’ and the child hurling abuse at Jackson before pretending to spit at the King of Pop. 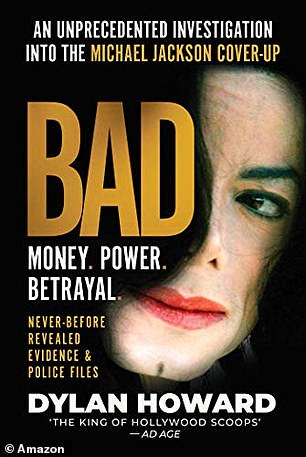 ‘The scene was worrying and baffling… the level of foul language and simulated abuse cannot be ignored,’ Howard says.

‘Although Michael and the kids were engaging in what was clearly over-the-top theatrics, their preferred subject matter was without a doubt age-inappropriate.’