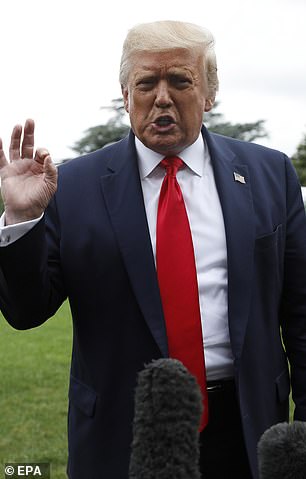 ‘I actually agree with this’: Trump turns on America’s tech billionaires and says there is ‘too much income disparity’ as he shares clip of Jeff Bezos’s $117bn fortune

By Karen Ruiz For Dailymail.com

Donald Trump has hit out at America’s tech billionaires, saying there is ‘too much income disparity’ in the US, as he shared a video clip on Amazon CEO Jeff Bezos’s multibillion-dollar fortune.

Trump on Saturday said ‘changes must be made soon’, after tweeting a Business Insider video showing how the country’s richest tech execs have only grown richer during the coronavirus pandemic.

The president shared a Business Insider report which showed how Bezos and other tech billionaires have increased their profits during the coronavirus pandemic. Report showed Bezos’s net worth (the yellow line) increased a whopping $48billion between March and June, while unemployment (the orange line) dropped

The report showed Bezos, the world’s richest man who is worth $117billion, raked in a whopping $48billion between March and June.

Collectively, America’s billionaires made a total of $637billion during the height of a global health crisis that has otherwise destroyed the economy, according to BI.

‘I actually agree with this. Too much income disparity! Changes must be made, and soon!’ Trump said on Twitter.

The president’s comments come days after a high-profile congressional hearing  during which lawmakers accused Amazon, Facebook, Apple and Google, of crushing rivals to boost profits.

Bezos, the world’s richest man, has been criticized over his immense wealth over the years

America’s largest tech firms have come under fire over the years, due to their enormous power and wealth that has led to calls for them to regulated by the government.

Bezos has also been criticized over his immense wealth, particularly when it comes to the issue of wealth disparity in America, with the billionaire being accused of greed after it was revealed Amazon had avoided paying income taxes in 2018.

It also comes amid mounting pressure for Republicans and Democrats to finalize a deal for a fourth stimulus package after the government’s $600-per-week unemployment benefits expired this week.

Trump on Thursday promised he would push for Congress to include in the fourth COVID-19 stimulus package another round of checks for Americans – similar to the $1,200 checks that were circulated, and signed by the president, earlier this year.