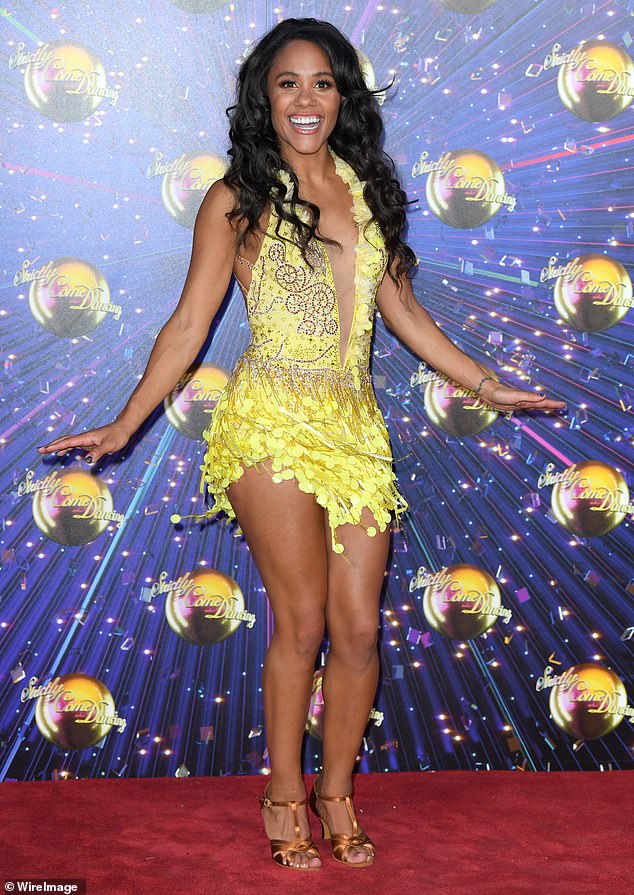 Alex Scott is thought to be poised to replace Sue Barker on A Question Of Sport after impressing bosses during previous appearances on the show.

The former England defender and Strictly Come Dancing contestant, 35, is set to meet with TV bosses in October about the opportunity.

It comes after it was revealed that Sue Barker, 64, was axed as host of the show after 24 years, alongside the team captains Matt Dawson and Phil Tufnell.

New job? Alex Scott is said to be poised to replace Sue Barker on A Question Of Sport after impressing bosses during previous appearances on the show (pictured during Strictly in 2019)

A source told The Sun that Alex was being ‘lined up’ as Sue’s replacement as she also has lots of sporting knowledge and experience.

The insider said: ‘Like Sue, she’s a former sportswoman and she also has five years of broadcasting under her belt.

‘This has nothing to do with gender, nor is it a case of the BBC trying to be woke.

‘While a lot can happen over the next three months, as things stand Alex is genuinely considered the best woman for the job.’

Changes: It was revealed earlier this week that Sue, 64, has been axed from BBC’s A Question Of Sport, alongside team captains Matt Dawson (left) and Phil Tufnell (right), so that bosses can draft in fresh talent

The source also explained how Alex had impressed BBC bosses when she appeared on the show in the past.

Alex has guest-starred on A Question Of Sport twice, with one occasion being aired in November 2016.

MailOnline has contacted representatives for Alex and the BBC for comment.

On screen: Alex previously appeared on A Question Of Sport in 2016 alongside Scottish rugby star Stuart Hogg (pictured during the show)

During her athletic career, Alex has represented Great Britain at the London 2012 Olympics and was awarded an MBE in 2016 as well as scoring 12 goals for England.

After retiring from football in 2017 she went on to be the first female pundit on Sky Sport’s Super Sunday show.

Alex has plenty of presenting experience as she has also co-presented CBBC’s Match of the Day Kickabout and BBC One’s The Women’s Football Show.

Last year, she appeared on Strictly Come Dancing and was partnered with professional dancer Neil Jones.

Career: Alex has previously played for England and Arsenal before becoming a successful TV presenter (pictured in 2017)

It comes after Sue Barker, who will stay on as the corporation’s face of Wimbledon, told of her sadness at having to leave the show after 24 years.

She said that the BBC had to remove her from A Question Of Sport as she would never have left her dream job voluntarily.

She told Sportsmail on Sunday: ‘I love the show so much they would have to remove me, it would have been tough for me to walk away.

‘I’ve absolutely loved my 24 years fronting A Question Of Sport, it’s been my dream job,’ she said.

‘But I understand the BBC want to take the show in a new direction and I’m sad to say goodbye.’

Barker will continue with presenting duties for the next two summers at Wimbledon, having signed a three-year deal last year.

Sportsmail understands she signed a new three-year contract last year to carry her through until at least 2022, something that will come as a relief to many viewers.

The decision to axe Miss Barker sparked fury from critics who accused the BBC of ageism, including former BBC radio and TV presenter Wendy Austin who tweeted: ‘No ageism/sexism in the BBC then…

Ex-newsreader Jennie Bond told GMB today: ‘Sue will be hurting this morning. You can’t do anything about your age and there is a pressure on television, particularly for women, to look younger.’

On Monday, sources disclosed to Sportsmail that Alex is well-liked by the broadcaster and in the mix to replace Barker as presenter.

Ex-Tottenham and England midfielder Jermaine Jenas was also said to be in the running to become one of the new team captains, with the BBC keen to diversify.

End of an era: It was revealed this week that Sue had been  axed as host of the show after 24 years. She will still be continue with presenting duties for the next two summers at Wimbledon