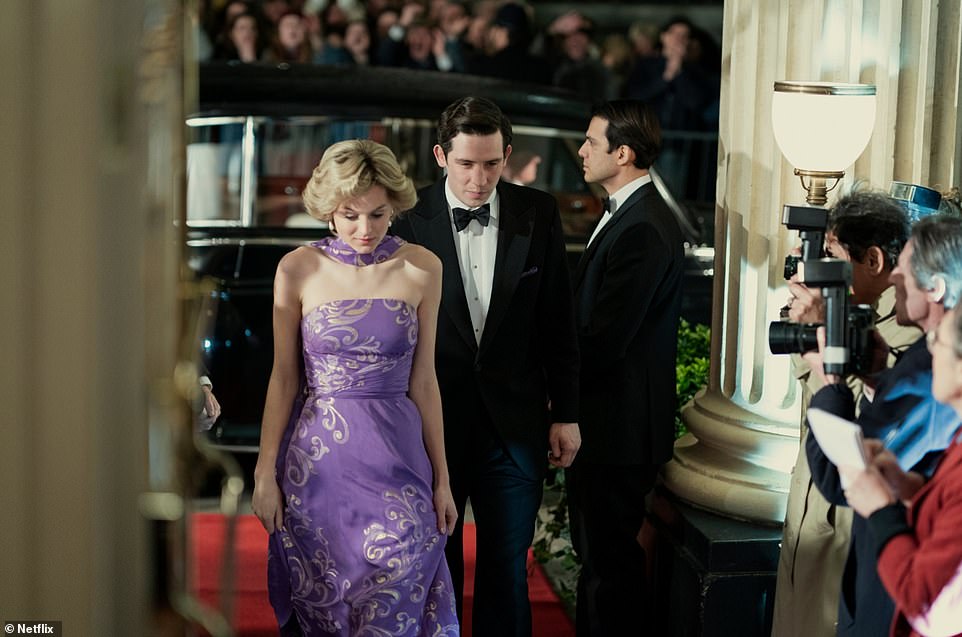 The Crown have released a collection of illustrious first look snaps, showcasing the Royal Family thrown into an era of political change, ahead of series four’s release in November.

The images shows Emma Corrin as Princess Diana making a glamorous entrance alongside her suave husband Charles, while another features Gillian Anderson as Margaret Thatcher, on the historic moment she enters Downing Street after being elected as Prime Minister.

The Crown Series Four will be released on Netflix on Sunday, November 15th, and will see dark times for the royals as they face yet more political and social upheaval.

Wow! The Crown have released a collection of illustrious first look snaps, showcasing the Royal Family thrown into an era of political change, ahead of series four’s release in November

In one image, Emma replicates one of Diana’s visits to the Royal Opera House with husband Charles, dressed in a beautiful purple strapless gown, which is believed to be a recreation of the Princes Of Wales’ birthday celebrations in 1987.

The couple were famously seen arriving, with Diana wearing a gorgeous gown which she teamed with a matching neck-tie which she wore draped down her back.

The second snap showcases the moment Prime Minister Margaret Thatcher arrived at Downing Street in 1979 after being elected for the first time, supported by her proud husband Denis. 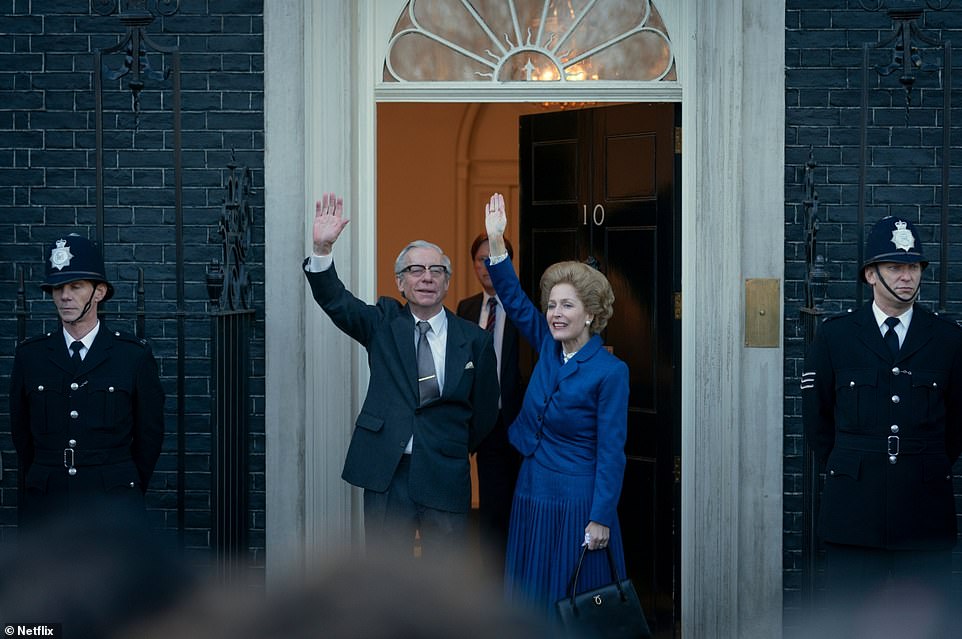 Historic: The second snap showcases the moment Prime Minister Margaret Thatcher arrived at Downing Street in 1979 after being elected for the first time, supported by her proud husband Denis

The Crown’s fourth series will document Diana’s blossoming romance with Prince Charles, as the trailer features the moment she emerges to greet an army of photographers, along with crowds cheering her name as she travels the world on behalf of the monarchy.

This includes Diana’s 1983 tour of Australia, when she famously donned a beautiful fuchsia pink dress.

The preview ends with a glimpse of Diana’s iconic David Emmanuel wedding dress, which will take centre stage as The Crown recreates her historic 1981 wedding.

The Crown Series Four will begin as the 1970s are drawing to a close, with the Royal Family preoccupied with safeguarding the line of succession by securing an appropriate bride for Prince Charles who is still unmarried at 30.

The British nation is struggling with the impact of the divisive policies introduced by Britain’s first female Prime Minister Margaret Thatcher.

Tensions between the Prime Minister and the Queen are expected to only get worse as Thatcher leads the country into the Falklands War, generating conflict within the Commonwealth.

A silver lining comes in the form of Charles’ fairytale romance with young Lady Diana, but behind closed doors, the Royal family is becoming increasingly divided.

Emma’s casting was announced in April 2019, with The Crown’s creator Peter Morgan calling her ‘a brilliant talent who immediately captivated us when she came in for the part of Diana Spencer.’

Josh O’Connor will reprise his role as Prince Charles, expected to take centre stage this series due to his relationship with Diana.

The series will also feature the ongoing issue of apartheid in South Africa, as well as the assassination of Lord Mountbatten (Charles Dance), and the miners’ strike of 1984-85.

Despite concerns that the series would be delayed due to the COVID-19 crisis, which brought much of the television industry to a halt, it seems the fourth season will be released as planned.

Bosses revealed back in March that filming was wrapped earlier than planned, though a majority of principle photography had already been completed.

It comes just days after it was announced that The Night Manager star Elizabeth Debicki has been cast as Princess Diana for The Crown’s final two series, while Jonathan Pryce was announced to be taking over the role of Prince Philip.

It was revealed on Wednesday that the actor, 73, will join the star-studded cast of the hit Netflix show and portray the royal through the 1990s and 2000s.

Speaking after the announcement, Jonathan added that it will be ‘a joy’ to act alongside Imelda Staunton as the Queen and Lesley Manville as Princess Margaret.