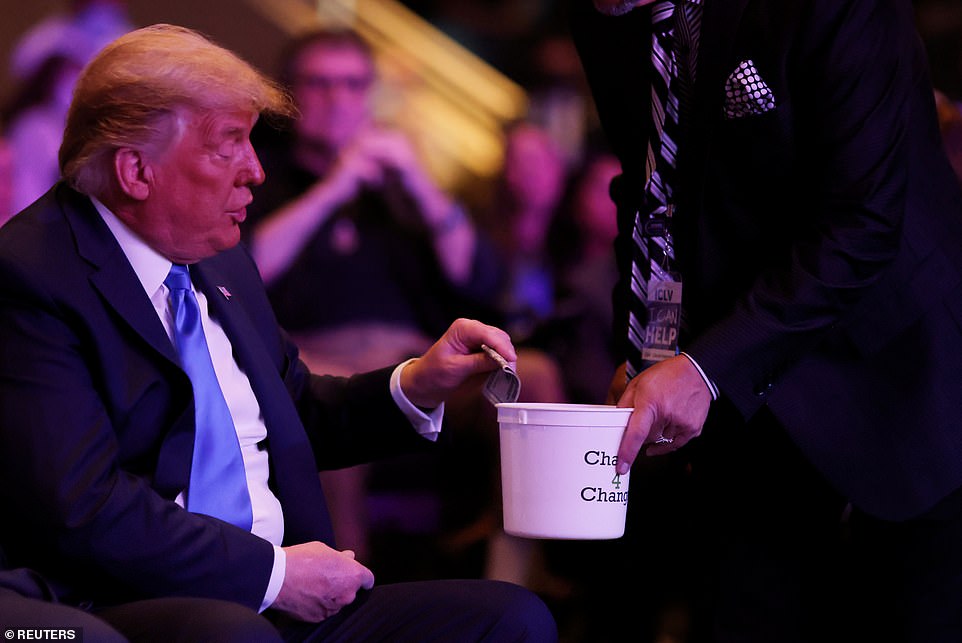 President Donald Trump attended a high energy church service Sunday morning at the International Church of Las Vegas, where he pulled out eight bills – which looked to be $20s – to add to the collection plate.

The service was part concert, part prayer session and even part rally, as the church’s pastor Paul Marc Goulet, ticked off a list of Trump’s accomplishments.

‘He gave the church back a voice,’ Goulet said. ‘He’s given a voice to the unborn,’ the pastor added, earning Trump loud cheers and a partial standing ovation from the crowd.

Goulet also thanked Trump for making his third appearance at the non-denominational Christian church, where members worship to music and flag dancers. ‘This is your third time here. That means you’re really a church member,’ Goulet said.

Only a smattering of worshippers were wearing masks.

Goulet talked about the need in the community because of the area’s high unemployment rate due to the economic fallout from the coronavirus pandemic.

‘Right now we’re feeding about 25,000 people a month in the city. Because, Mr. President we went to about 28-29 per cent unemployment in our city and our Clark County and because of that we just have cars lining up,’ Goulet said. 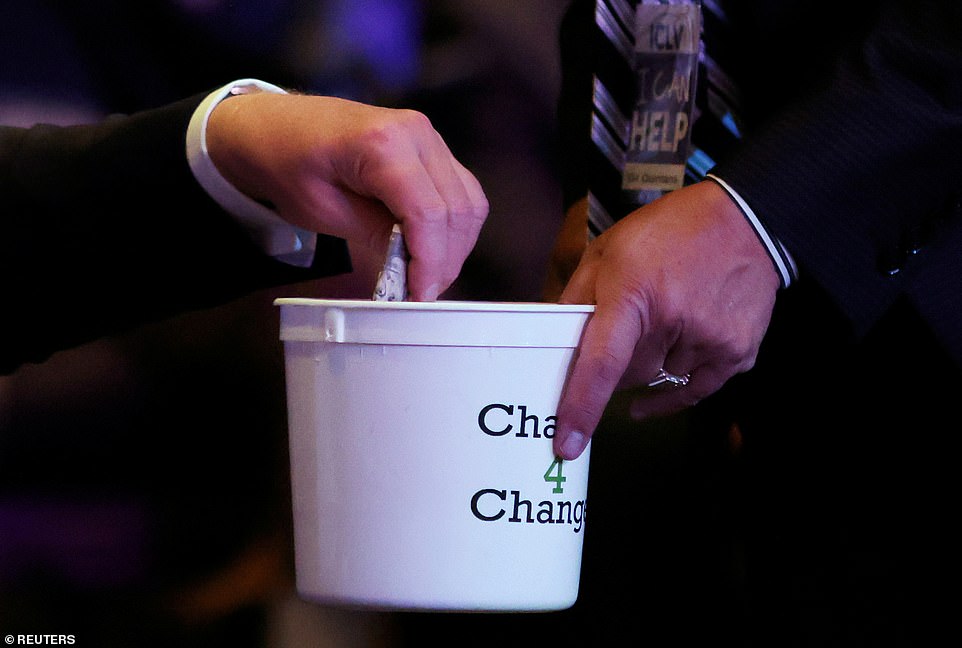 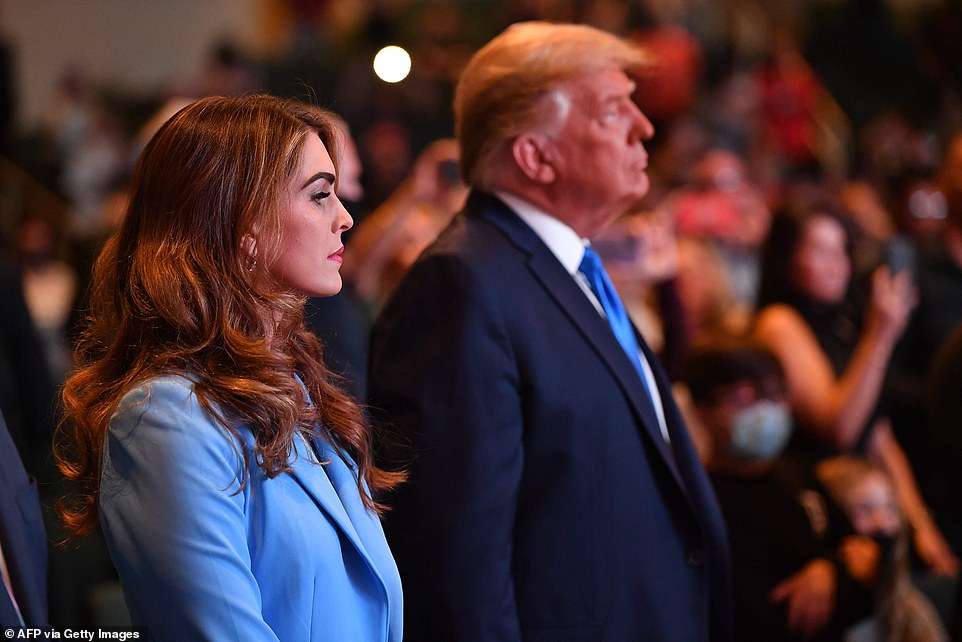 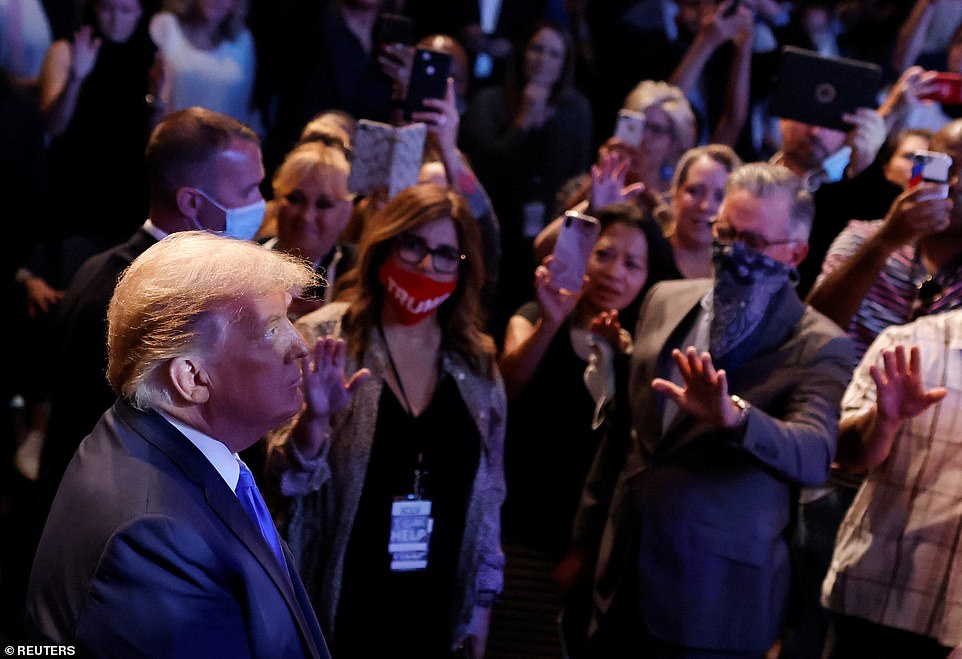 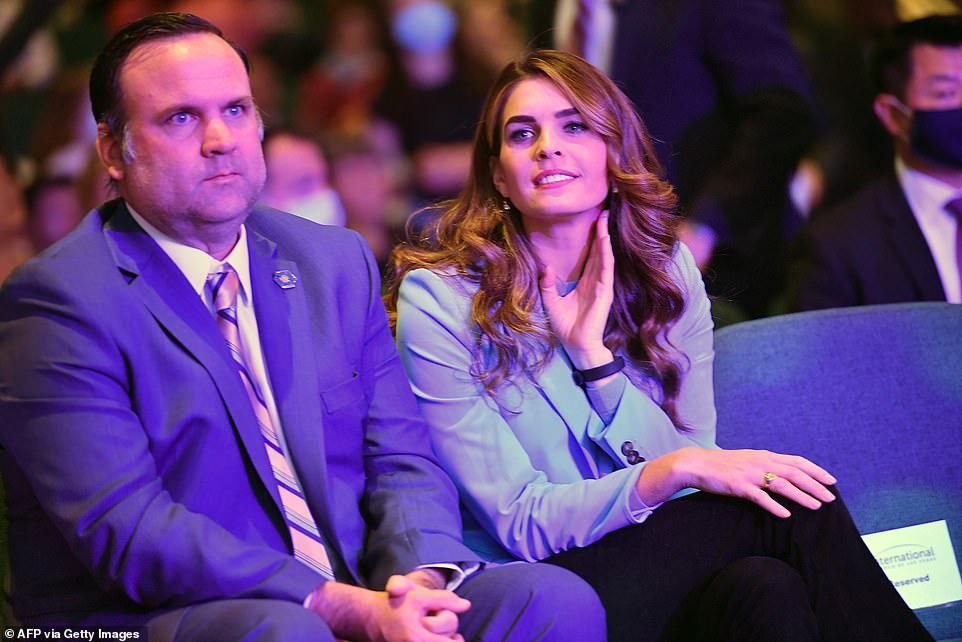 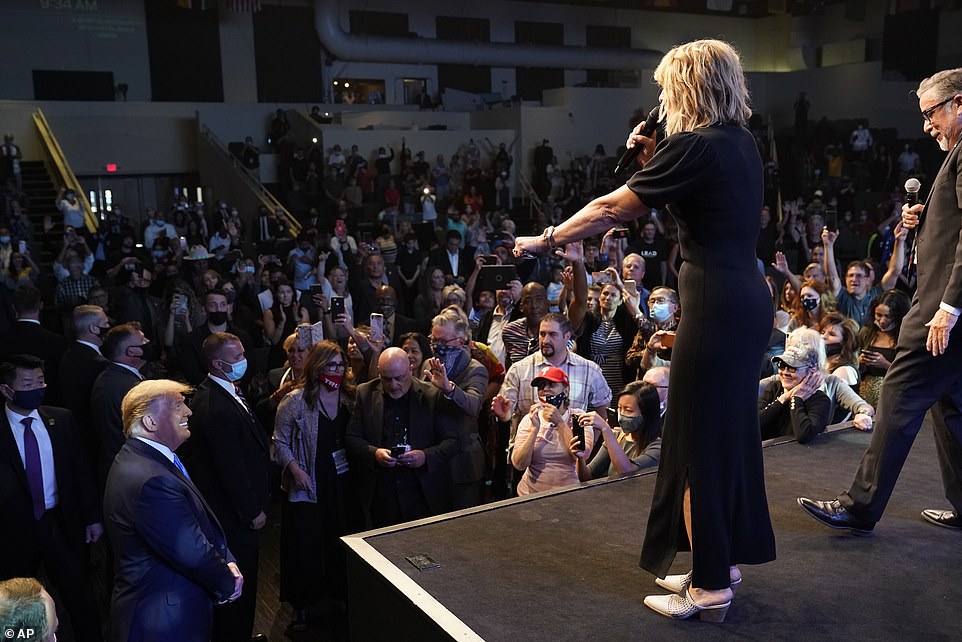 Denise Goulet leads the church in a prayer for President Donald Trump, who got a seat near the front of the International Church in Las Vegas

Goulet teased Trump’s trip to the church in a Twitter video Saturday afternoon, saying there were ‘tons of surprises’ in store and it would be ‘super, super cool.’

‘Get there very early to get a good seat,’ he advised parishioners.

‘And I’m going to share a tremendous prophetic word that was downloaded, I believe, in my brain and my heart from God. And I want to transfer it to you,’ Goulet said. ‘I hadn’t planned on preaching or teaching, but change of plans.’

Goulet also said food would be available for worshipers in need or to give away to hungry friends.

When Trump first arrived, Goulet’s wife Denise – who’s also a church leader – said she had received a message from the Lord.

‘It’s good to see you again,’ she said. ‘At 4:30 the Lord said to me, I am going to give your president a second win,’ she said to cheers from the crowd.

She explained that this has three meanings: ‘A win, that you’ll be the president again.’

She also used a play on words saying it could be like when an athlete gets a second win – or wind. ‘This is what the Lord’s saying, he has made your lungs, your body, your spirit, your strength is made in such a way that you have been in such high pressure places in the last four years – and the Lord said, he is ready for the next four years.’

Third she pointed out, ‘The second wind – with a D – is the Holy Spirit,’ she said, receiving loud cheers from the crowd.

Biden went to Sunday services with his wife Jill at St. Joseph’s on the Brandywine in his adoped hometown of Wilmington, Delaware.

Afterward, the couple briefly visited the grave of Beau Biden, the former vice president’s son who died of cancer in 2015.

He and the ex-veep’s first wife and baby daughter are all buried on the church’s grounds.

Biden has consistenly been going to church since it reopened.

Trump has not been to church services in person since late 2019. 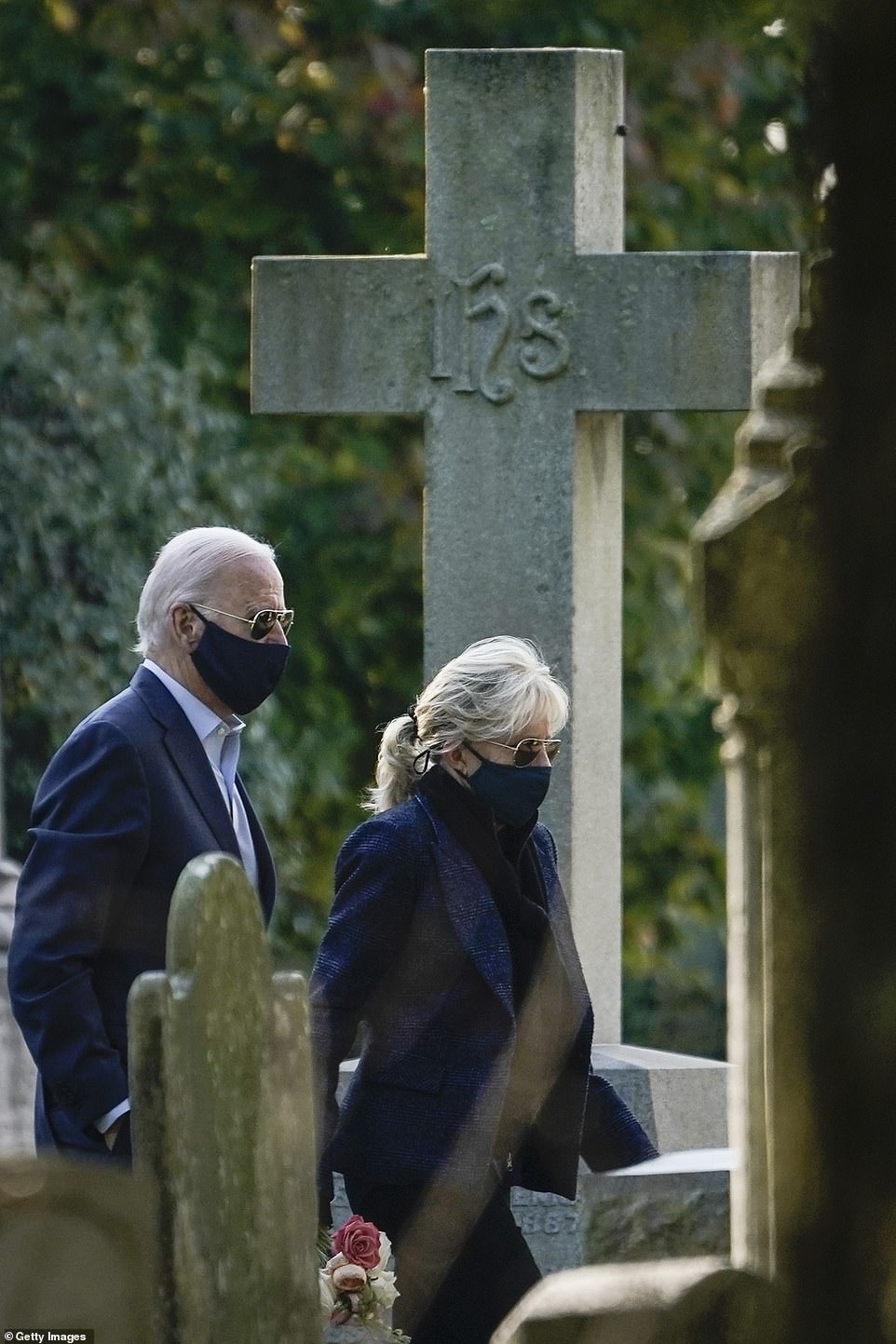 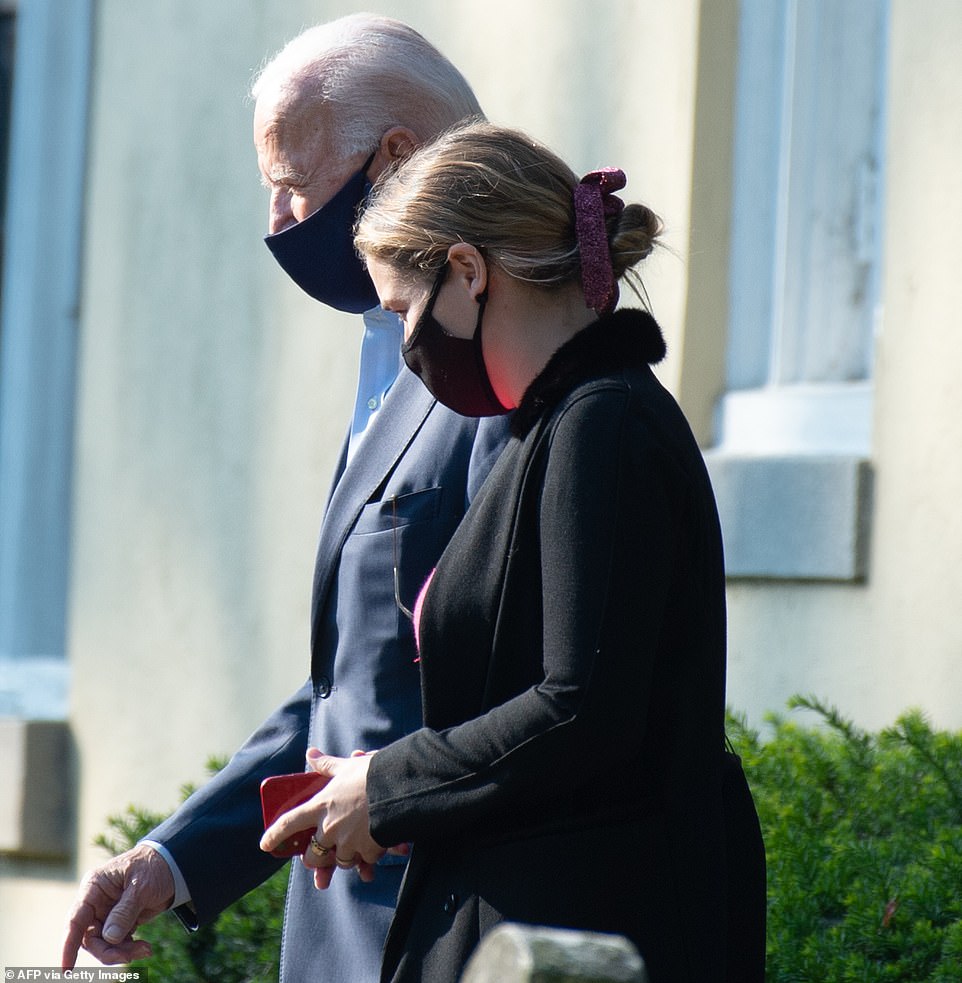 The former vice president is captured leaving services with his granddaughter Finnegan Biden, the daughter of Hunter Biden. The family then visited the grave of Beau Biden 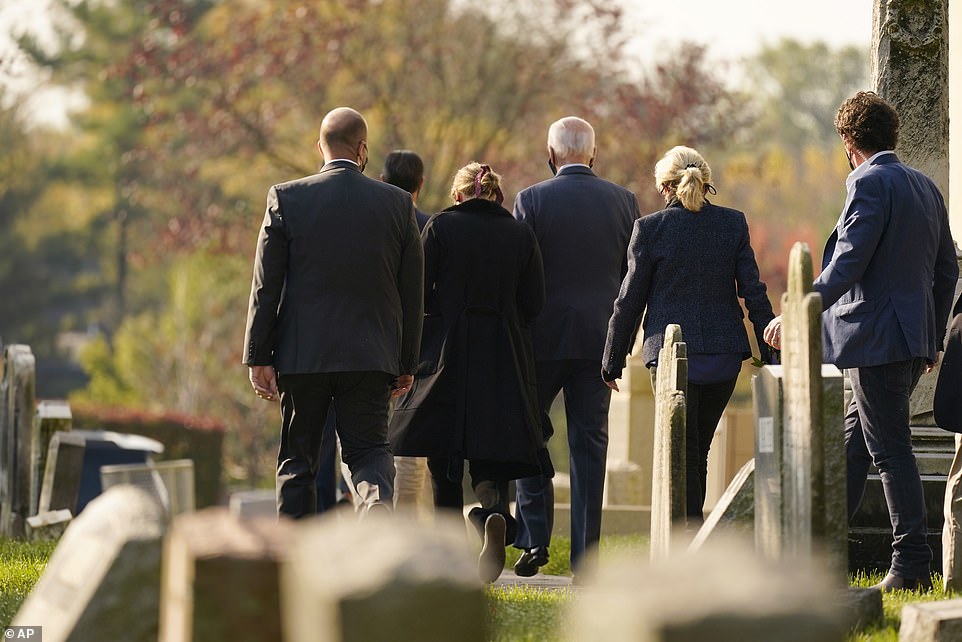 He went to Christmas eve services at an Evangelical church in Palm Beach last year.

He then headlined an ‘Evangelicals for Trump’ event at a Miami mega-church on January 3.

Due to the coronavirus pandemic, Trump did not go to Bethesda-by-the-Sea in Palm Beach for Easter services, as is his tradition. He and first lady Melania Trump wed at this church in January 2005.

Instead he attended Easter Sunday services virtually, using a laptop to tune in to pastor Robert Jeffress of the First Baptist Church in Dallas.

One of the president’s most memorable moments in 2020, however, was at a church.

On June 1, Trump and an entourage from the White House walked across Lafayette park, moments after Black Lives Matter protesters had been cleared using rubber bullets and teargas. 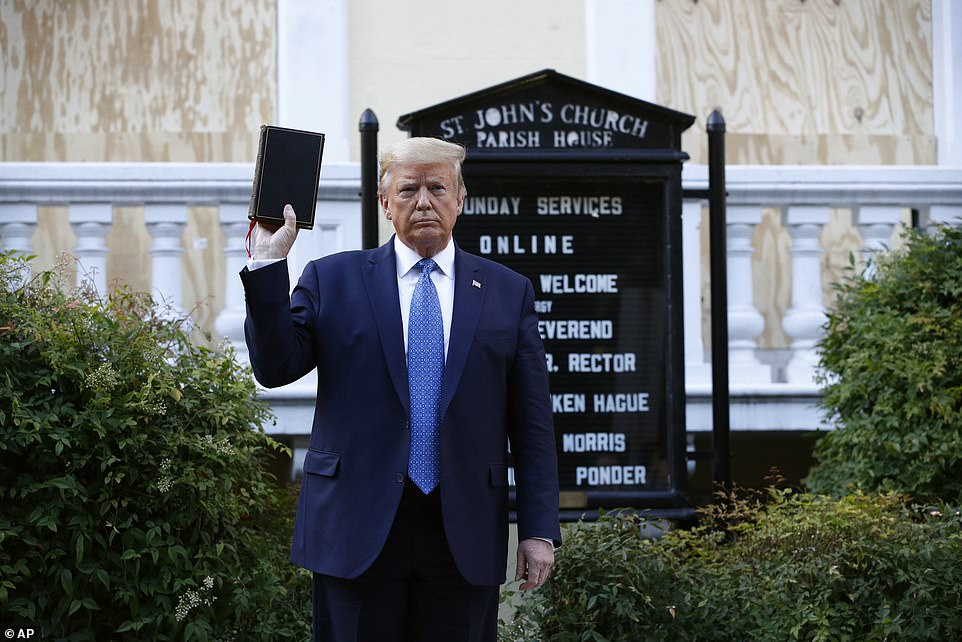 One of President Donald Trump’s most memorable moments in 2020 was in front of a church. On June 1 he held up a Bible in front of St. John’s in Washington amid the George Floyd protests

The president held up a Bible and posed for photos in front of D.C.’s historic St. John’s church.

That move attracted criticism from political opponents and clergy.

St. John’s had suffered minor damage from protests the night before that had gotten out of control.

Before Trump went to church Sunday he blasted media reports about his botched coronavirus response, again contending that the U.S. only has more coronavirus cases because the country tests so much for COVID-19.

‘The United States shows more CASES than other countries, which the Lamestream Fake News Media pounces on daily, because it TESTS at such a high (and costly) level. No country in the world tests at this level. The more you TEST, the more CASES you will be reporting. Very simple!’ he wrote.

He also, again, brought up The New York Post’s reporting on Hunter Biden’s laptop ‘a disaster for the entire Biden family.’

The president also called it the ‘second biggest political scandal in our history!’

The Post said it published content from a copy of a hard drive given to Trump’s personal lawyer Rudy Giuliani from a laptop that allegedly belonged to Hunter Biden.

Trump and his allies have been on a quest to link Joe Biden to Hunter Biden’s overseas business deals, attempting to paint the Democrat as corrupt – and put the president on the right side of the scheme that got him impeached.

The president was accused of pressuring Ukraine’s president to announce an investigation into Hunter and Joe Biden.