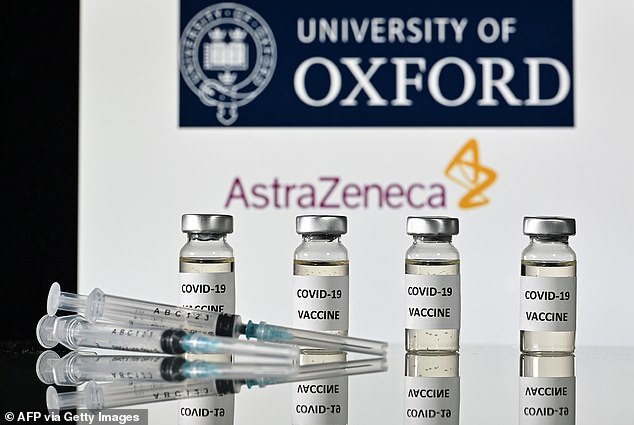 Britain could start using Oxford University’s coronavirus before Christmas, if it gets approved by drug regulators in a decision that could come within the next week.

The MHRA this week became the first agency in the world to green-light a Covid-19 vaccine for public use when it approved one made by Pfizer and BioNTech.

And it is now evaluating the jab developed by Oxford and AstraZeneca after being instructed by the Department of Health on November 27. Scientists behind the jab have already submitted the final trial results to a medical journal, which are expected to be published imminently.

Professor Jonathan Van-Tam, deputy chief medical officer for England, said the jab — which No10 has ordered 100million doses of — would ‘hopefully be approved before Christmas’.

It took regulators eight working days to give Pfizer’s vaccine the go-ahead after the Department of Health officially requested they evaluate it. If AstraZeneca’s can be done in the same time frame, a decision could be announced as soon as Tuesday next week, December 8.

The jab would likely be ready to go within days when it is eventually approved – it is being manufactured in England and is easy to transport because it can be stored in normal fridges or even at room temperature.

The other of the trio of promising vaccines – made by US-based company Moderna – is a step behind in the approval process but will not be available in Britain until March 2021 at the earliest.

Ministers scrambled to buy seven million doses of Moderna’s vaccine only after the company announced that clinical trials suggested it was 94.5 per cent effective.

The MHRA – Medicines and Healthcare products Regulatory Agency – has not yet been officially ordered to start evaluating it.

The vaccine developed by Oxford University and AstraZeneca will be the cheapest and the easiest to store and distribute out of the three to have produced clinical trial results already, but studies suggest it may also be the least effective

Oxford and AstraZeneca’s vaccine currently looks set to become the second one to get approved and used in Britain.

Clinical trial results have suggested it is safe to use and at least 62 per cent effective at stopping Covid-19 – potentially as high as 90 per cent.

The pharmaceutical company said the MHRA had not given them a date to expect a decision but added regulators were ‘working round the clock’ to get it done.

Up to four million doses could be delivered before the end of 2020 if the vaccine gets the green light, showing the company has prepared to start at the drop of a hat.

AstraZeneca said that while regulators would be looking at the same aspects of all the vaccines, the time frames shouldn’t be seen as a direct comparison.

HOW DID UK BECOME THE FIRST TO APPROVE A COVID VACCINE?

Britain pipped the US and the rest of Europe to become the first country in the world to have a clinically authorised coronavirus vaccine on Wednesday.

Pfizer/BioNTech’s jab was given the green light by the Medicines and Healthcare products Regulatory Agency (MHRA) within a week of receiving results from final trials of the vaccine.

Normally it takes months, if not years, for regulators to pore over data from vaccine trials and decide whether they are safe, effective and the studies were of a high standard.

But new laws passed during the pandemic gave  the MHRA the ability to keep frontrunner Covid vaccines under a ‘rolling review’. This allowed officials to scrutinise data from the studies in real time and give the vaccine emergency approval.

The European Medicines Agency (EMA) and Food and Drug Administration (FDA) in the US have also been doing rolling reviews of Pfizer’s jab.

But the regulators there say they are moving towards a more long term authorisation and a full licence, which they claim requires more checks and evidence to be submitted than the MHRA’s temporary approval.

The MHRA will need to approve every batch of Pfizer’s vaccine as it comes in, and in theory could terminate approval at any time, whereas authorisation in the EU and US would last a year before renewal.

Both the EMA and the FDA have safety questions over the speed at which the MHRA acted to approve the treatment.

But Dr June Raine, MHRA Chief Executive, has reassured Brits that ‘no corners were cut’ in the approval process and that the jab had been assessed ‘with meticulous care’.

She told a Downing Street press conference yesterday that experts had worked ’round the clock, carefully, methodically poring over tables and analyses and graphs on every single piece of data’.

More than 1,000 pages of data had been examined, she said.

‘The way of working in a rolling review ensures that our teams of clinicians and scientists are working in parallel to complete all of the work according to strict guidelines on safety, effectiveness and quality.

‘The vaccine has only been approved because those strict tests have been done and complied with.’

The MHRA received official instruction from the Department of Health about Pfizer’s vaccine on November 23 and had approved the jab by December 2.

The same instruction was given about Oxford and AstraZeneca on November 27.

If the decision takes the same amount of time, this suggests that the MHRA could reach a conclusion by Sunday, December 6, or Tuesday, December 8.

Each vaccine is different, however, and the trial results are different as well, which may affect how long regulators want to spend looking at a jab.

A dosing error in Oxford’s trial found that people given 1.5 doses of the vaccine instead of two whole ones developed a much higher level of protection against Covid-19 – 90 per cent compared to 62 per cent.

But because this was discovered by accident, and only happened in a small group of people, it raised questions about how the correct dose should be decided and how robust the trial results are.

Oxford and AstraZeneca are running another trial to confirm whether a slightly lower dose could work better, and said they had sent more data to officials in the past week.

The full results of the clinical trial are expected to be published in a journal in the coming weeks.

When the early results were published, the London School of Hygiene’s Professor Stephen Evans said: ‘There is little doubt that these data meet the criteria, based on numbers alone, for regulatory approval.’

Experts optimistic about the approval of Pfizer’s vaccine this week said they expected more vaccines to come good soon.

Professor Liam Smeeth, an epidemiologist at the London School of Hygiene and a non-executive director at the MHRA, said on BBC Radio 4 today: ‘Hopefully other vaccines will be coming on licence and approved as safe with time, very quickly indeed, and we will be able to vaccinate the wider groups that are currently recommended.’

Oxford’s scientists held a briefing when the results of their trials were published, during which Dr Andrew Pollard said: ‘We’re not in a rush and it’s not a competition with the other developers.’

He added: ‘It’s possible that things could line up so there’s not much difference in timing [with Pfizer].’

Moderna’s vaccine will be the last of the three to get a decision from the MHRA because it has not yet been formally requested by the Department of Health.

It is not yet clear whether this is because insufficient data has been submitted by the firm or because the Government has stalled on it.

The jab is at the same stage of clinical trials as Oxford’s and Pfizer’s, so should be ready for evaluation this month.

Clinical trials suggest the vaccine is 94.5 per cent effective and the results have been similar to those sent by Pfizer and BioNTech, while the type of vaccine is almost identical.

On Monday, Dr Gillies O’Bryan-Tear, of the Faculty of Pharmaceutical Medicine, said: ‘The MHRA had announced that they are reviewing the data on an ongoing basis, and it’s likely that approval will also be granted within a fortnight, using emergency authorisation procedures.’

Pfizer and BioNTech, however, have pledged their first doses to the US.

The UK was a late buyer, ordering five million doses on the day that the companies published their results, which means it will have to wait until spring 2021 for the first batches of the jab to be delivered.

HOW DO THE OXFORD, MODERNA AND PFIZER/BIONTECH VACCINES COMPARE?

Oxford/AstraZeneca, Moderna and Pfizer/BioNTech have all released results from the final stages of clinical trials of their vaccines, with all suggesting they are more effective than expected.

While Moderna’s and Pfizer’s work in the same way and show similar levels of efficacy (around 95 per cent), they are significantly more expensive and difficult to store and transport than AstraZeneca’s, which will cost just £2 per dose and be stored in run-of-the-mill fridges.

Here’s how they compare:

mRNA vaccine – Genetic material from coronavirus is injected to trick immune system into making ‘spike’ proteins and learning how to attack them.

mRNA vaccine – both Moderna’s and Pfizer and BioNTech’s vaccines work in the same way.

Recombinant viral vector vaccine – a harmless cold virus taken from chimpanzees was edited to produce the ‘spike’ proteins and look like the coronavirus.

UK has ordered five million doses which will become available from March 2021. Moderna will produce 20m doses this year, expected to stay in the US.

UK has already ordered 40million doses, of which 10million could be available in 2020. First vaccinations expected in December.

UK has already ordered 100million doses and is expected to be first in line to get it once approved.

What side effects does it cause?

Moderna said the vaccine is ‘generally safe and well tolerated’. Most side effects were mild or moderate but included pain, fatigue and headache, which were ‘generally’ short-lived.

Pfizer and BioNTech did not produce a breakdown of side effects but said the Data Monitoring Committee ‘has not reported any serious safety concerns’.

Oxford said there have been no serious safety concerns. Mild side effects have been relatively common in small trials, with many participants reporting that their arm hurt after the jab and they later suffered a headache, exhaustion or muscle pain. More data is being collected.