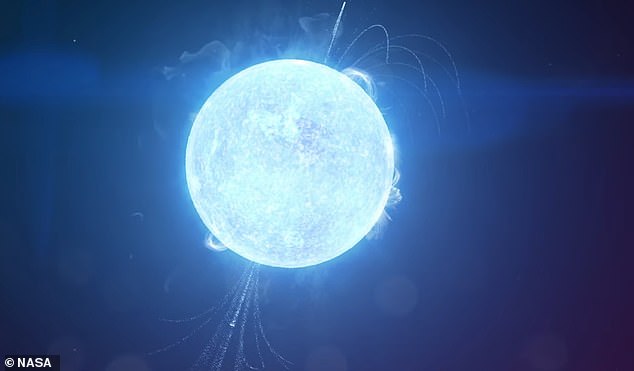 Giant flare that swept passed Mars originated from a powerful neutron star in a galaxy 11.4 million light-years from Earth

A giant flare was detected in April by NASA satellites as it swept passed Mars Scientists say it came from a powerful neutron star 11.4 million light-years awayThis is the highest burst to be detected since 2008 by NASA satellitesDubbed GRB 200415A, it lasted milliseconds but updated instruments were able to capture enough data to follow a path back to where it came from

By Stacy Liberatore For Dailymail.com

A giant flare that swept through the solar system in April sent scientists on investigation deep into space to uncover the high-energy burst’s origin – and the hunt is finally over.

A group of researchers led by the University of Johannesburg revealed the explosion, dubbed GRB 200415A, was released from a magnetar — a neutron star with a strong magnetic field – located in a spiral galaxy 11.4 million light-years away.

The elusive visitor flew passed Mars in the early hours of April 15 that was picked up by a number of satellites, including the International Space Station, sparking the search outside of the Milky Way and to the distant galaxy NGC 253.

The burst, however, lasted for just 140 milliseconds, but due the advanced orbiting instruments were able to capture more data than from the previous flare detected 13 years ago.

GRB 200415A was picked up at 4:42am ET April 15 by satellites and was the first known giant flare to be detected since 2008 by NASA’s Fermi Gamma-ray space telescope.

The recent burst was also detected by Fermi, along with Swift, Mars Odyssey and Wind mission satellites and the European Space Agency’s INTEGRAL satellite.

Gamma-ray bursts (GRB) are the brightest and most energetic events in the universe.