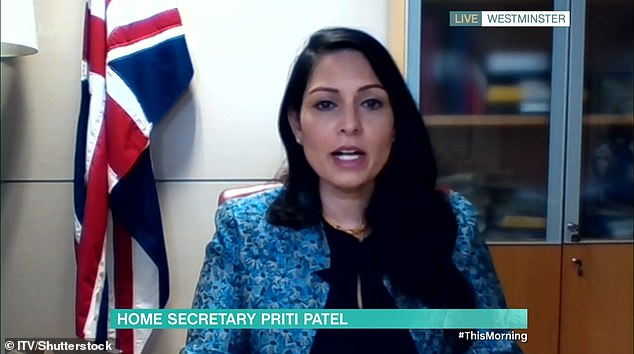 Priti Patel sparked confusion today as she told the public to exercise alone – in direct contrast to the lockdown rules.

The guidance makes clear that in England someone is allowed to exercise outdoors with one other person from a different household.

It comes amid varying interpretations of the rules governing exercise by police forces across the UK, specifically over what constitutes exercise and how far you can travel to do it.

Asked about the rules, Ms Patel told Phillip Schofield and Holly Willoughby: ‘The clarity is exercising on your own and not socialising.’

She added: ‘The point to make about any exercise – yes, it should be local, people exercise differently. But exercise on your own and don’t use it for a social meeting.’

She said ‘cycling is fine, because you are on your own, you should not be cycling with other people’.

Ms Patel continued: ‘Running, exactly in the same way because you are on your own, walking on your own.’

A source later said that the Home Secretary was aware that the rules allowed exercise with one other person but was suggesting people show an ‘abundance of caution’, as it is ‘always best to do things on your own when you can’. 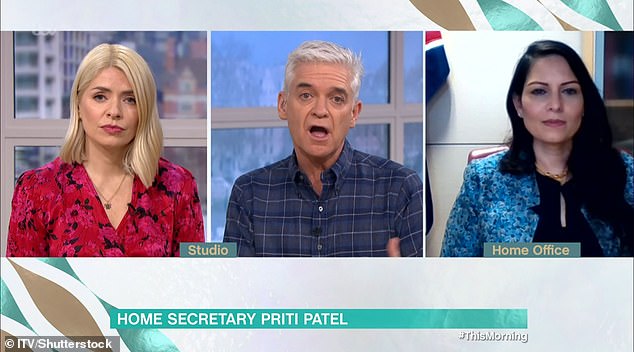 Asked about the rules, Ms Patel told Phillip Schofield and Holly Willoughby: ‘The point to make about any exercise – yes, it should be local, people exercise differently. But exercise on your own and don’t use it for a social meeting.’

Ministers are under mounting pressure to clarify exactly how far people can travel for exercise and what they can do amid public and police confusion over ‘woolly’ lockdown rules.

Government advice urges people to stay ‘local’ but does not specify a distance in law, which has resulted in officers making their own interpretations and incorrectly fining walkers driving just five miles from home.

And there is also confusion over whether people can legally buy a coffee while they are out, and then contunue walking while drinking it.

The lack of concrete rules has left forces across England grappling with lockdown enforcement at a time when ministers are concerned with fraying compliance with the rules.

Yesterday MPs were told police are in discussions with ministers that could see the rules on exercise and travel tightened.

Owen Weatherill,  from the National Police Chiefs’ Council, who is leading the policing response to the pandemic in England and Wales, said the rules around exercise are ‘a real challenge’.

He told the Home Affairs Committee that more detail should be added to health guidance and lockdown laws to make them clearer to the public.

The Assistant Chief Constable said there was an ‘active discussion’ between police, the Home Office and the Department of Health on how to improve the rules ‘to give greater clarity to the public and also to our officers’.