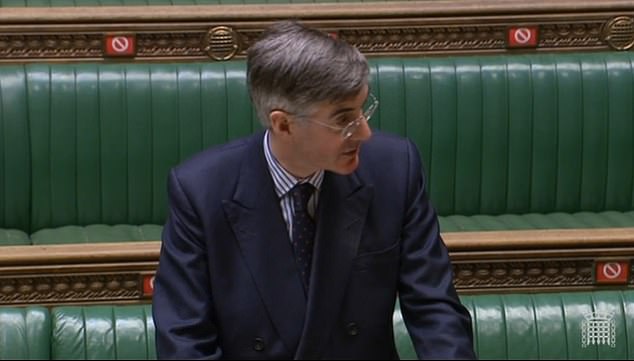 Commons Leader Jacob Rees-Mogg made the claim in the Commons today after days of claims that exporters have been hit by a ‘perfect storm’ of bureaucracy, IT problems and confusion since the EU trade agreement kicked in on January 1.

There were complaints of shellfish rotting in ports as the ‘disastrous’ hold-ups meant they could not be sold in Europe.

After SNP politicians claimed that the hold-ups were costing £1million per day, Tory Brexiteer Mr Rees-Mogg said: ‘What is happening is that the Government is tackling this issue, dealing with it as quickly as possible, and the key thing is we’ve got our fish back.

‘They’re now British fish and they’re better and happier fish for it.’

At this the Commons Speaker Sir Lindsay Hoyle intervened and noted: ‘Obviously there’s no overwhelming evidence for that.’ 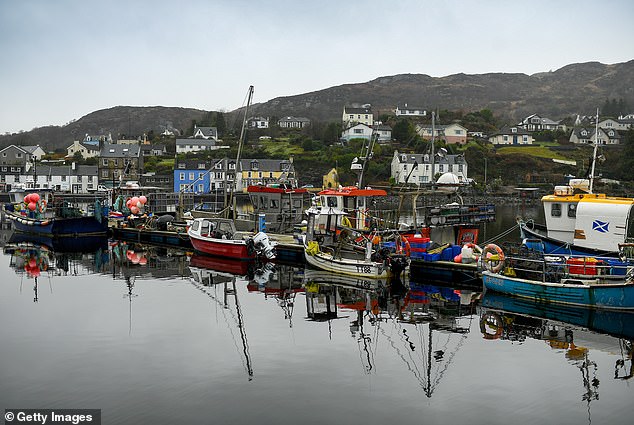 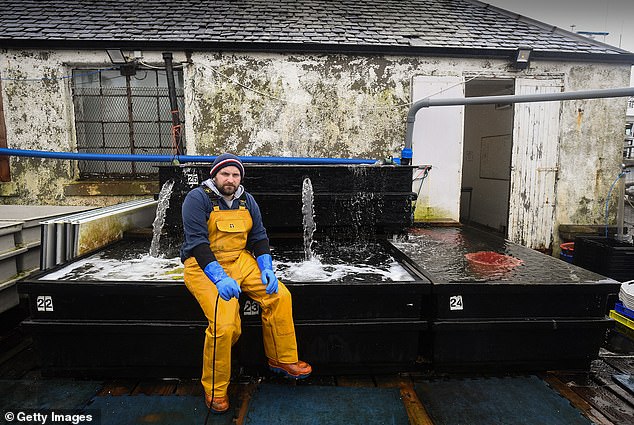 Jamie McMillan from Loch Fyne Langoustines today in Tarbert, Scotland. There are claims the Scottish industry is losing £1million per day

A fourth-generation Welsh shellfish wholesaler is facing having to write-off a £50,00 consignment of fish sent to France due to a paperwork anomaly.

Nerys Edwards said the future of Syren Shellfish was hanging in the balance after the lorry load of lobsters, prawns and crabs was delayed for more than 30 hours on a lorry to Spain.

The 53-year-old sent the lorry from Pembrokeshire to the continent via Portsmouth. But new border rules – brought in as part of the UK’s new relationship with the European Union – stopped the lorry in the French port of Caen.

It is not being allowed to carry on until Ms Edwards resubmits paperwork.

She and daughter Lissa have spent two years preparing to export into the EU after Brexit and both thought they were fully up to date with all the paperwork requirements. She had already paid £48,000 to a group of 25 Welsh fishers.

She even found herself in a car park in Narberth finalising the paperwork with a health officer at midnight just hours before the lorry left for Portsmouth.

Even so, issues at the border meant the consignment was stuck in Portsmouth for 24 hours before it crossed to France where it was held by French customs for another seven.

‘The shellfish is dying while it sits in Caen,’ she said.

Ms Edwards said she was not confident that every document was correct and the worry and stress had caused sleepless nights. She claimed the importer in France had made a mistake on the document that he needed to complete.

Her family and her parents before her have been sending live shellfish to Spanish customers every week, but she says she is feeling ‘exceedingly unimportant’ as the authorities try to make Brexit work.

‘The powers that be should have been able to give us guidance,’ she said.

‘We’ve had no opportunity to practice. Not even a week to practice and implement these new rules.

‘I’m exhausted and ready to jack it in. I can’t keep up with the stress of this again.’

Mr Rees-Mogg’s SNP counterpart Tommy Sheppard had earlier labelled it the ‘Brexit fishing disaster’ and asked for a debate on compensation for the Scottish fishing industry.

He said: ‘Boats confined to harbour, lorry loads of seafood destroyed, the industry losing £1million a day as firms go bust – all as a result of Brexit red tape imposed by this Government.

‘Yet when asked about this yesterday, the Prime Minister refused to answer.’

It came as the Fisheries Minister faced ridicule for admitting not reading the post-Brexit trade deal with Brussels when it was agreed because she was busy organising a Nativity trail.

Asked if her jaw had dropped when she saw the deal with the EU on Christmas Eve, Ms Prentis told peers: ‘No, the agreement came when we were all very busy on Christmas Eve, in my case organising the local Nativity trail.’

Meanwhile, Scottish Government analysis of the Brexit deal finally agreed by Prime Minister Boris Johnson has claimed the amount of fish the fleet can land will fall for a number of key catches – including North Sea haddock and cod.

Scottish Tory leader Douglas Ross told the Commons this morning that fishermen must be compensated for seafood export delays.

Mr Ross said financial compensation is ‘clearly needed by our fishermen right across the country’ as the environment secretary promised the Government is ‘working hard to address these problems’ surrounding the export of Scottish seafood to the EU.

His comments came after Prime Minister Boris Johnson told a committee of MPs that fishing businesses would be compensated for what he described as ‘temporary frustrations’ on Wednesday.

During an urgent question on the matter in the Commons on Thursday, MPs from all parties voiced their concerns about exports of Scottish seafood from smaller companies being halted for a further five days by transport company DFDS.

DFDS stopped exports last week after delays in getting new paperwork introduced following the expiry of the Brexit transition period for EU border posts in France.

Mr Ross shared the story of a local skipper whose catch is currently worth ‘half of what he needs to cover his costs’, adding: ‘So can the secretary of state outline the discussions that he’s having with the Scottish Government regarding the problems at Larkhall and with the compensation scheme that is clearly needed by our fishermen right across the country?’

Environment Secretary George Eustice replied: ‘I am having a discussion with DFDS (a Danish shipping and logistics company) later today to see if we can offer help.

‘They are working through quite a difficult situation, working hard to address these problems, as are Food Standards Scotland.’

But Liberal Democrat MP Alistair Carmichael described the situation as ‘a shambles of the Government’s own making’.

Mr Carmichael, who tabled the urgent question, said: ‘For years this Government has promised our fishing industry a sea of opportunity, but today our boats are tied up in harbour, their propellers filled with red tape manufactured in Whitehall.’

Mr Carmichael added: ‘Yesterday, the Prime Minister told the Liaison Committee that compensation had been considered for our fishing industry.

‘Who is going to be compensated, for what and by how much?’

He also noted that Victoria Prentis ‘apparently didn’t think it was worth reading the agreement as soon as it was made, even though every second counted’, following the fisheries minister’s comment to the Lords Environment Committee that she was ‘very busy on Christmas Eve’ when the agreement came through, ‘organising the local nativity trail’.

‘They are only teething problems, once people get used to using the paperwork goods will flow normally.’ 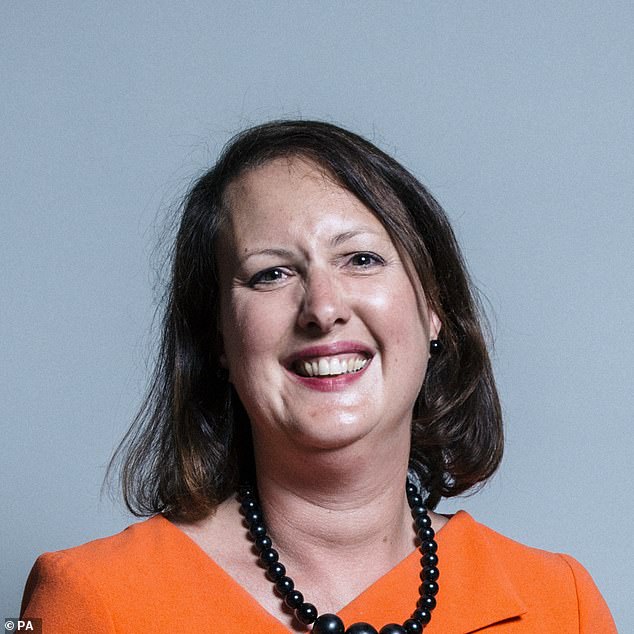 The Environment Secretary also denied that Fisheries Minister Ms Prentis had not read the agreement, adding: ‘I think the record will show that she did not say she didn’t have time to read the agreement, what she actually said is that her jaw did not drop when she was told what was in the agreement.

‘Now there may be a reason for that, which is that she knew what was likely to be in the agreement for at least a week, since I’d been discussing it with her and we were both in regular contact with our negotiators.’

On compensation, he added: ‘We will look closely at this issue, but in the meantime, we’re going to work very closely with the industry to make sure we can iron out these difficulties.’

The DUP’s Ian Paisley later spoke in defence of Ms Prentis, saying she has been subject to ‘a character assassination’ over her comments and that she had taken a call from him on the issue of fishing on Christmas Eve.

Mr Esterson said: ‘The shortage of vets to inspect fish, the lack of customs agents to process border forms and there not being enough time for businesses to adapt to new rules of origin are, I would suggest, a lot more than teething problems.

‘The Secretary of State might want to rethink his analysis there.’