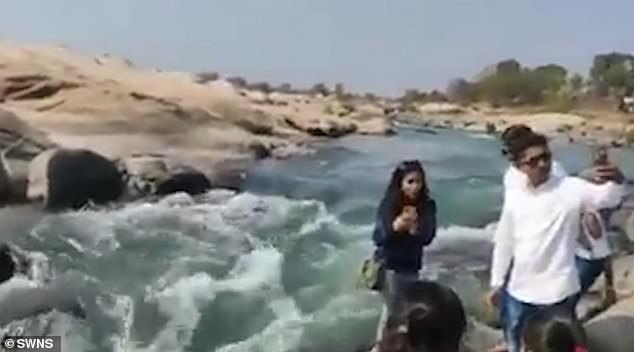 By Darren Boyle for MailOnline

A woman who died after falling into a river in eastern India was caught on camera taking selfies on a rock moments before she lost her balance and plunged into the raging torrent.

The video shows the woman, who has since been named as Nirupama Prajapati, happily taking photographs by the river in Kanakunda in the Oshida district in western India.

Prajapati plunged into the river and was swept away by the raging torrent and eventually carried over a waterfall before her body was found down river.

The video appears to show that a man stumbling behind Prajapati may have distracted her, causing her to lose her balance and fall of the rock that was perilously close to the river.

The woman, pictured, was standing at the edge of the river beside a section of rapids near a picnic spot in the district of Odisha 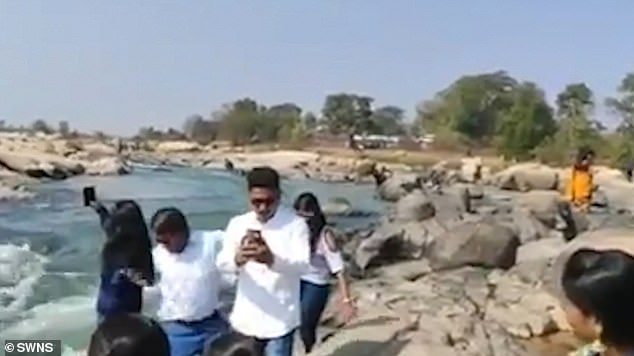 As the woman takes a selfie, a man appears to stumble behind her sending her into the water 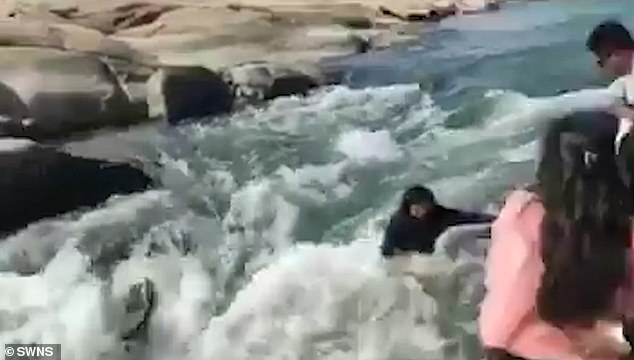 The woman, pictured, enters the water and is unable to stand up so is washed rapidly down stream

The tragic scene unfolded near Kanakund, a picnic spot in the Sundargarh district of Odisha.

Another woman screams as the victim is swept away by the power of the fast flowing water.

The water in the river was shallow but because of its speed the woman was unable to prevent herself from being washed away.

The incident happened so quickly that bystanders were unable to step in and grab her before disappeared.

Her family and the local fire brigade launched an extensive search of the scene.

Her body was recovered the following day around a quarter of a mile down stream. The young woman’s body was wedged under a rock.

Local media has reported that several people have died while taking selfies in dangerous locations.

On New Year’s Day, Satya Parija of Kaliagaan drowned after falling into a waterfall in Semiliguda.

Witnesses said he was taking a selfie when he plunged to his death.

His body has not been recovered. 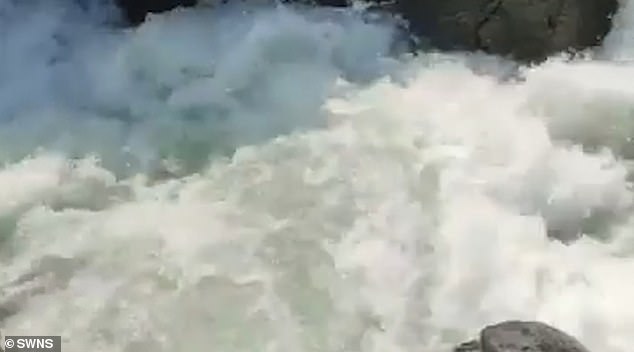 Moments later the woman had vanished beneath the angry foaming water