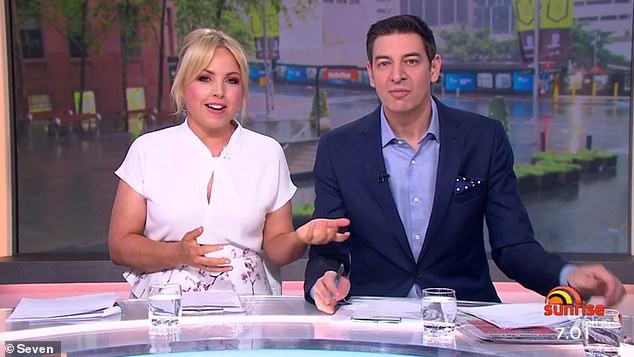 The man who (almost) replaced Kochie: Basil Zempilas was convinced Channel Seven wanted him to host Sunrise… before he quit his job and became Mayor of Perth

Former Weekend Sunrise host Basil Zempilas was convinced he was next in line to take over from David ‘Kochie’ Koch as Sunrise co-anchor.

But his hopes were dashed when network bosses made it clear they were sticking with Kochie, who signed a new two-year deal in July.

Fortunately, Basil has other duties keeping him busy: he hosts 92.9 Triple M’s breakfast show in addition to being the the Lord Mayor of Perth.

Successor: Former Weekend Sunrise host Basil Zempilas (right, with Monique Wright) was convinced he was next in line to take over from David ‘Kochie’ Koch as Sunrise co-anchor

Basil, who hosted Weekend Sunrise for two years but quit in 2019 for family reasons, assumed Seven had big plans for him because of the travel required for his job.

He used to commute from Perth to Sydney every weekend to host the show.

‘Look, I suppose if you’re living in Perth and they ring you up out of the blue and say, “Can you fly to Sydney every weekend and host Weekend Sunrise and we’ll see how it goes” … I guess there was a sense of expectation that if they didn’t have a role for me, they wouldn’t be flying a bloke from Perth every weekend,’ he said on Triple M.

But it seems no plans were forthcoming, as Kochie signed a two-year contract extension in 2018, which was renewed in July 2020.

Basil said he ‘wasn’t annoyed’ at Kochie, but he did think Seven had dangled a carrot when there was no job opportunity available.

‘But did I think maybe there was an opportunity there and maybe was that the direction I was heading? Yeah, I probably did,’ he said.

While Kochie did renew his deal with Seven six months ago, it’s believed he didn’t get a pay rise because of the Covid-19 recession.

Television expert Rob McKnight told Daily Mail Australia it was a ‘smart play by Seven’ to lock in Kochie for another two years.

‘Kochie has always been the driving force of Sunrise and is loved by viewers,’ said McKnight, who is the editor of industry website TV Blackbox.

‘Sunrise has been a dominant number 1 and it makes sense to stay with a winning line-up. Kochie and Sam have proven to be a great team who connect with viewers.

‘In these tough times, Kochie won’t mind the fact there’s no pay rise as reported; he has always been a team player.’