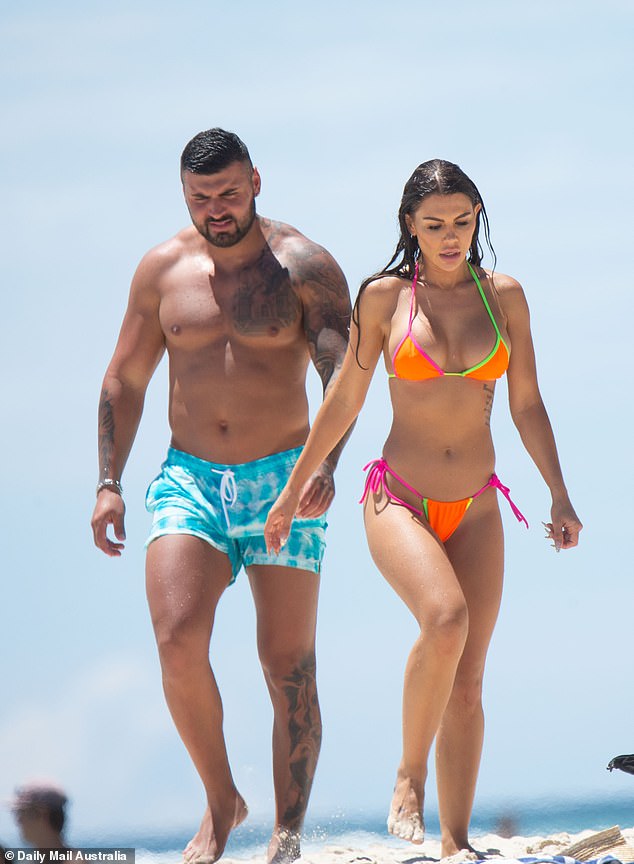 And on Tuesday, Kiki Morris looked happier than ever as she hit the beach in Byron Bay with her new boyfriend, Lucas Azzopardi.

The former Bachelor star, 33, showed off her sensational figure in a fluorescent bikini which featured cheeky G-string bottoms.

Get a room! Former Bachelor star Kirralee ‘Kiki’ Morris hit the beach in Byron Bay with her new boyfriend, Lucas Azzopardi, on Tuesday

Sporting a perfectly golden tan, the glamour model appeared to be in a good mood as she soaked up the sun with her man.

Meanwhile, Lucas showed off his buff physique in tie-dye boardshorts.

The couple couldn’t keep their hands off each another as they packed on the PDA in front of other beachgoers. 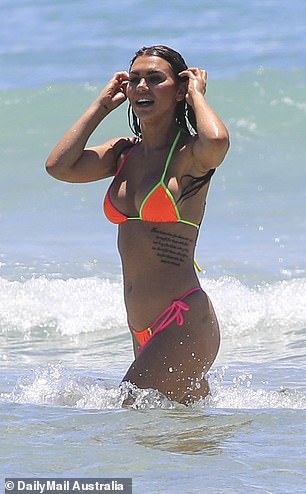 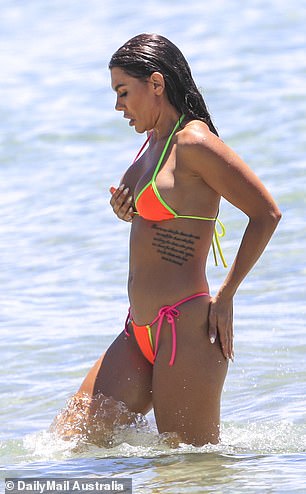 Eye-popping display: The glamour model, 33, showed off her sensational figure in a fluorescent bikini which featured cheeky G-string bottoms 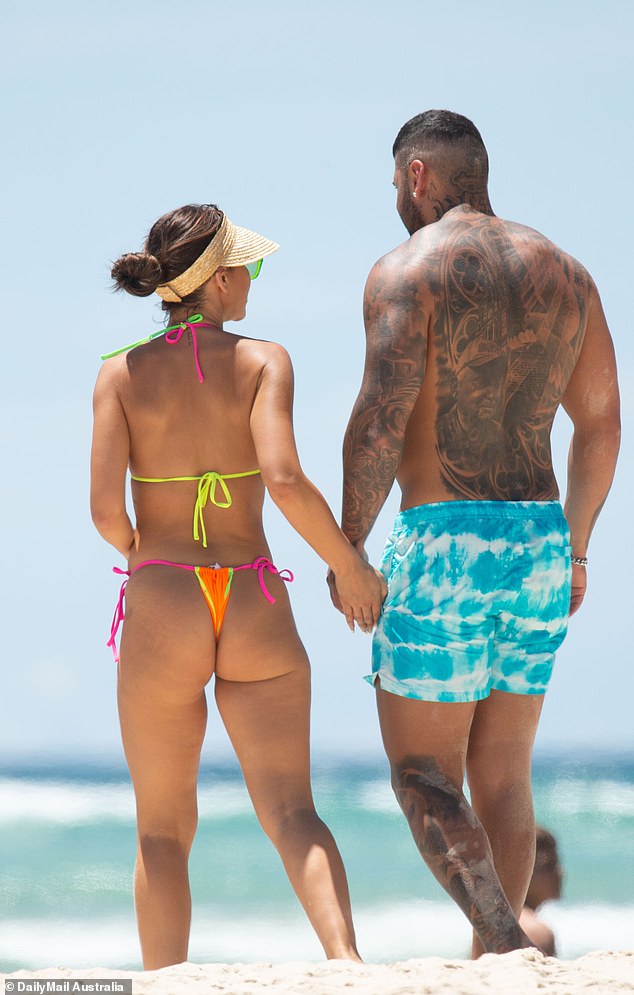 Sun’s out, Buns out! Sporting a golden tan and showing off her derrière in the cheeky-cut bikini bottoms, the former Zoo model appeared spritely as she soaked up the sun with her man 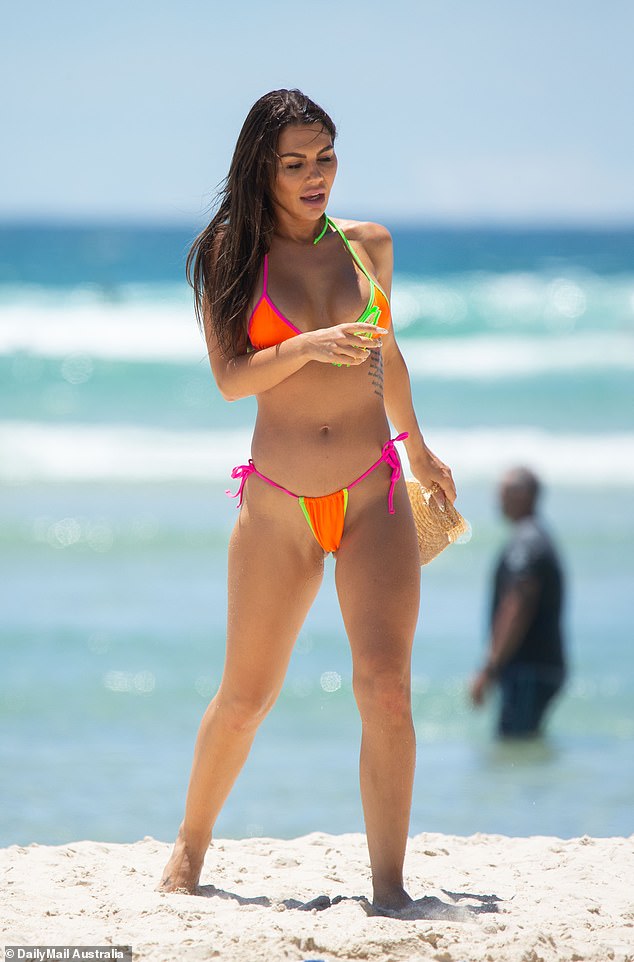 Stand out: Kiki showed off her natural complexion and appeared to be wearing little makeup 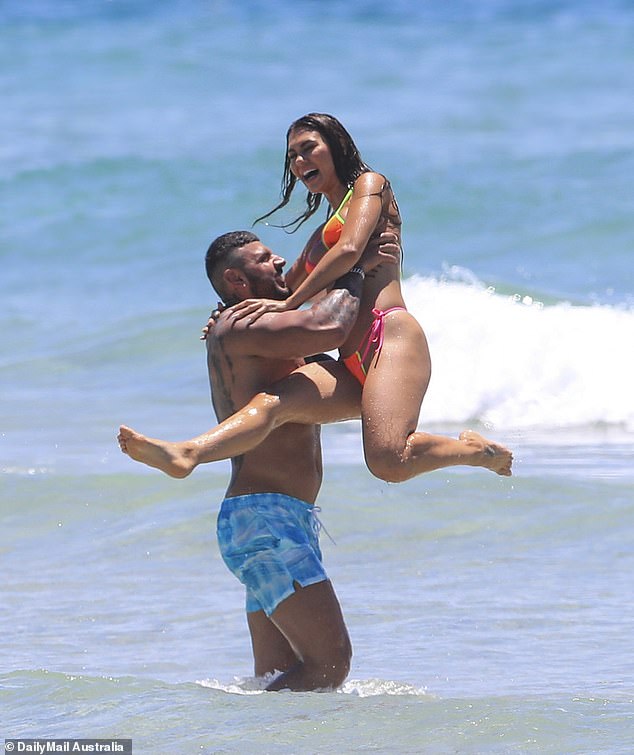 At one point heavily tattooed Lucas, was seen picking up the brunette beauty as they playfully in the ocean. 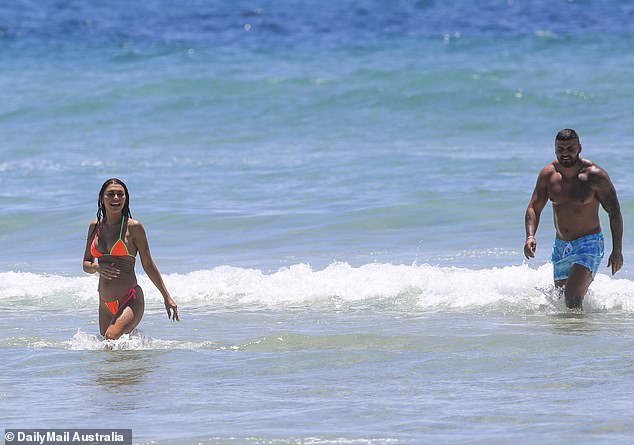 Dressed for it: Lucas showed off his buff physique in Turquoise tie dye coloured board shorts

At one point, heavily tattooed Lucas lifted up the brunette as they frolicked together in the ocean.

Later on, Kiki couldn’t wipe the smile off her face as she wrapped her arms around her boyfriend’s shoulders for a piggyback ride.

The getaway comes just days after Kiki went public with their romance on Instagram. 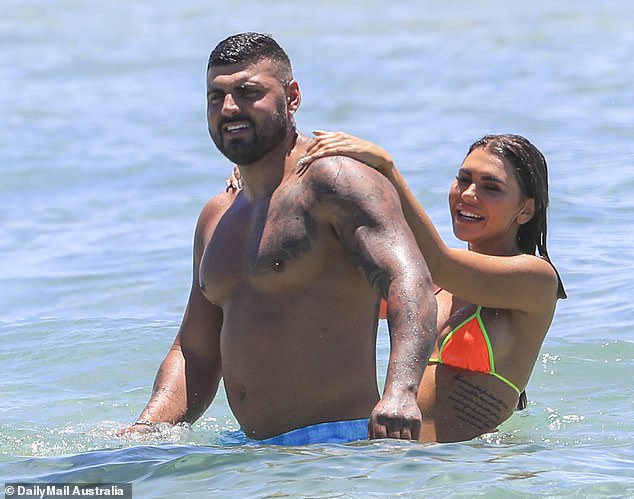 Joy: Kiki looked happier and relaxed as ever as she wrapped her arms around her man as he carried her 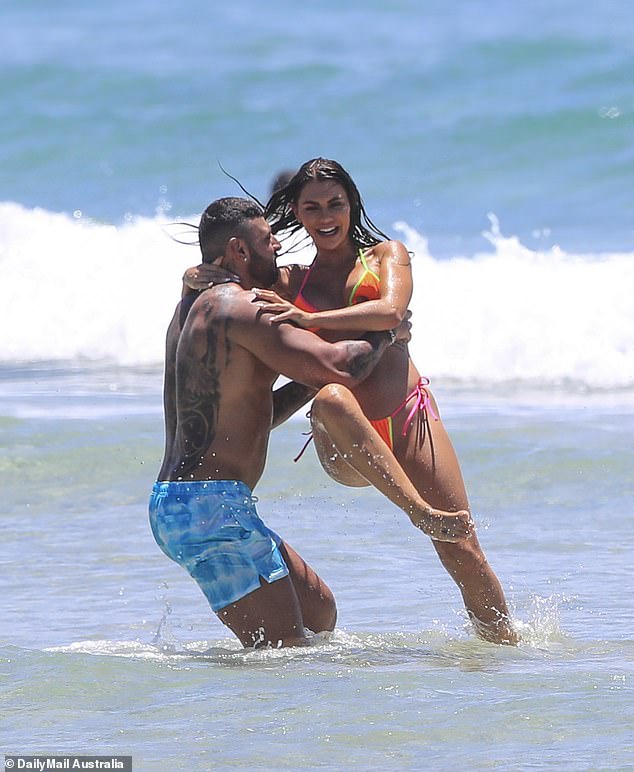 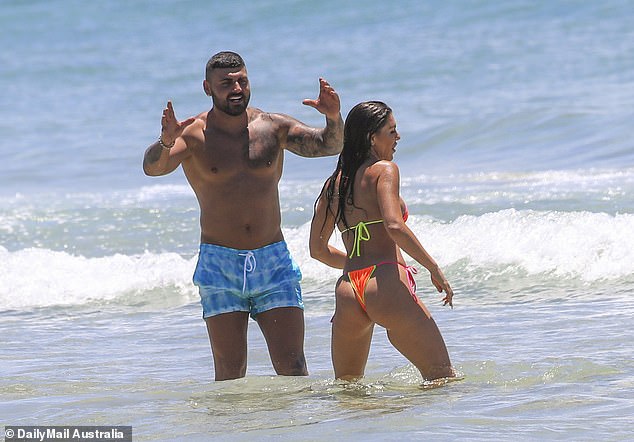 Relaxed: The couple appeared to be enjoying’s each other’s company while cooling down in the ocean 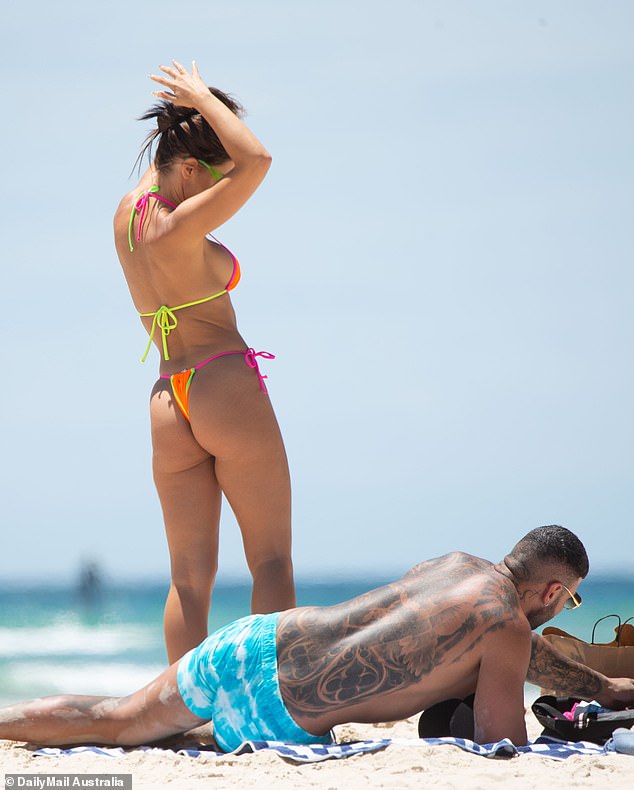 The Bachelor in Paradise alum shared a gallery of photos of the couple last Friday, including shots of them cuddling up in bed.

He is also a fitness influencer, boasting an impressive following on Instagram. 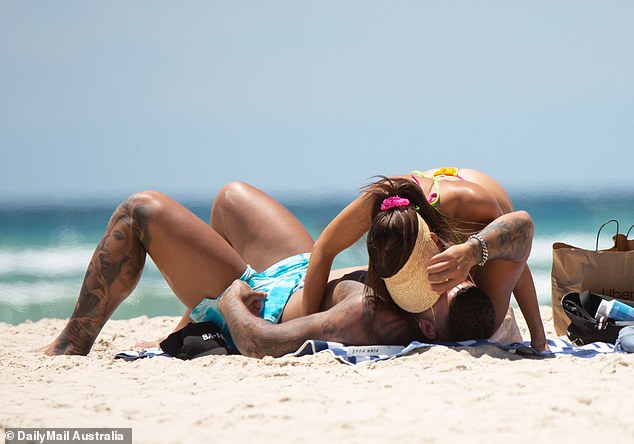 In love: The couple couldn’t keep their hands off one another as they packed on the PDA during their date 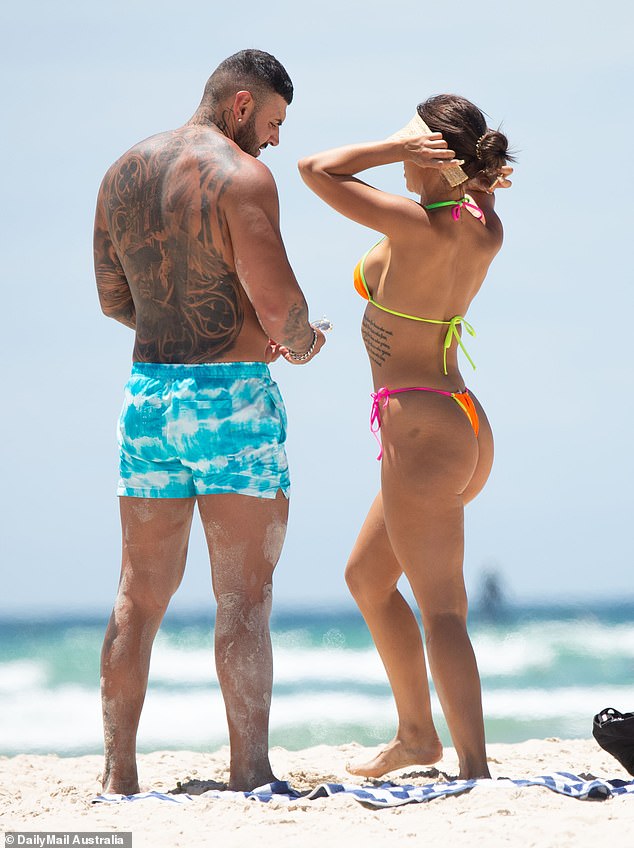 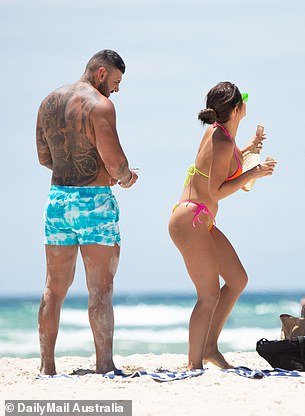 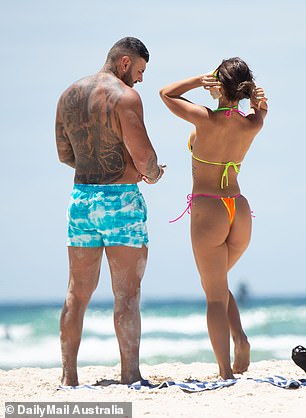 New romance: The former Bachelor star unveiled her new love sharing a photo collage of herself and Lucas cuddling up in bed together on Friday

Kiki rose to fame on Richie Strahan’s season of The Bachelor in 2016, and returned to the franchise on Bachelor in Paradise last year. 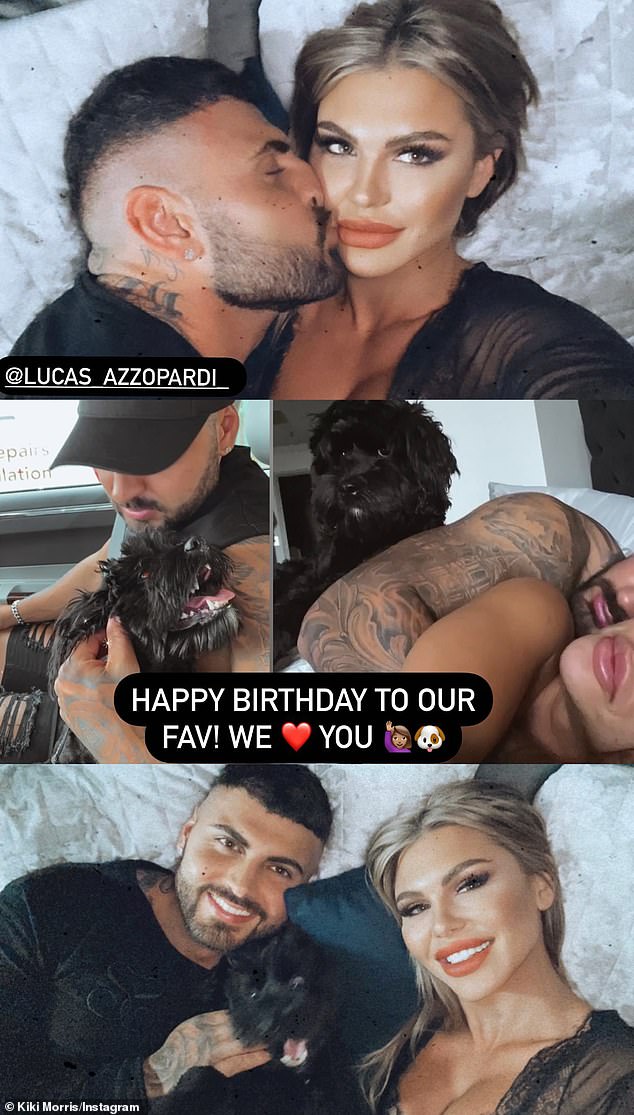 Cute gesture: ‘Happy birthday to our fav! We love you,’ Kiki captioned the post, presumably referring to herself and their pooch 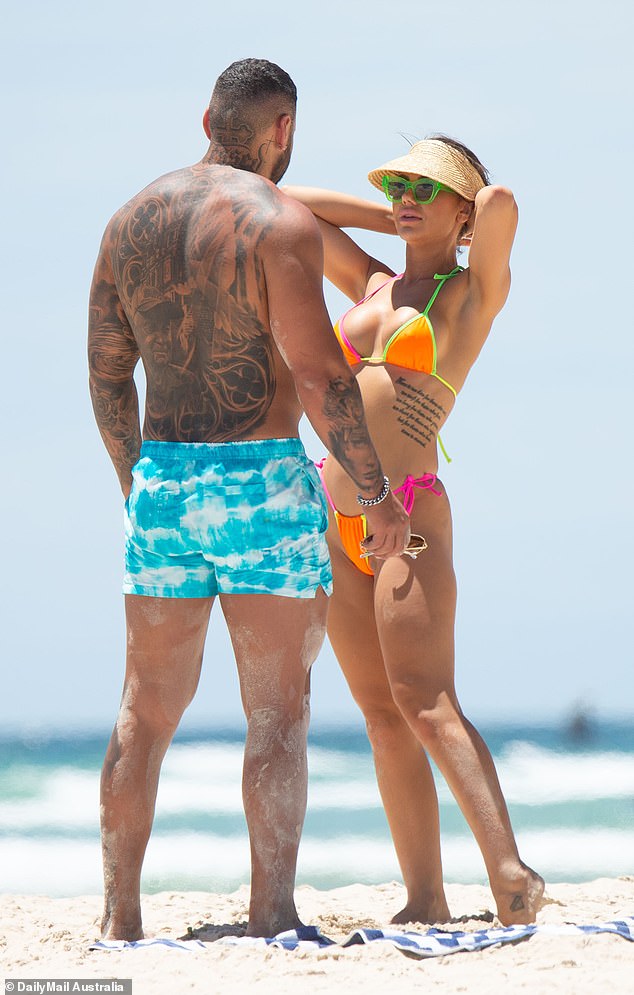 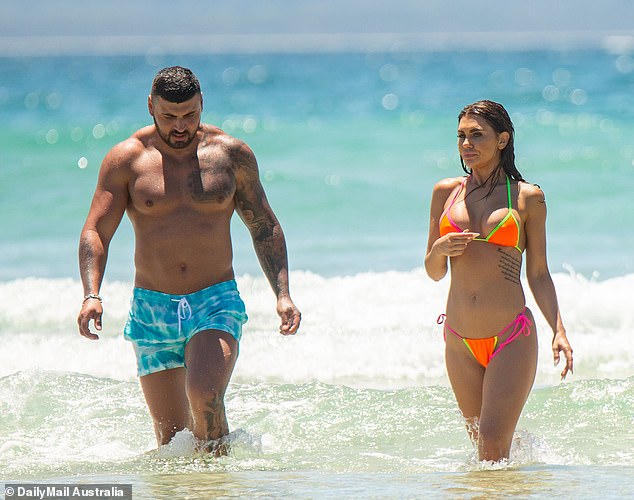 Holiday: The couple have been spending time together in the NSW coastal town of Byron Bay 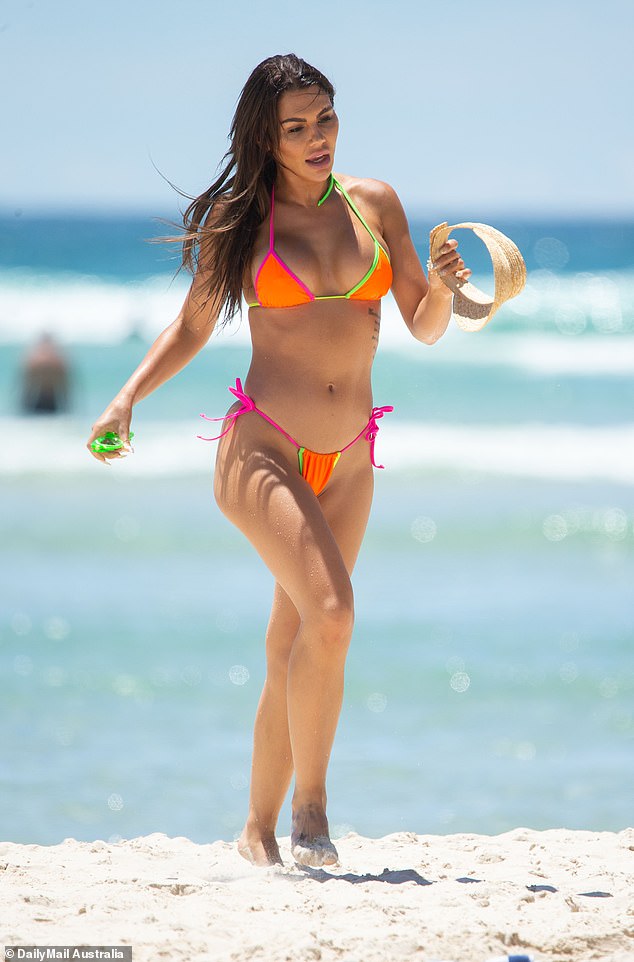 Busy: Kiki has been making the most of her time in isolation peppering her new swimwear and activewear, which she is launching in 2021