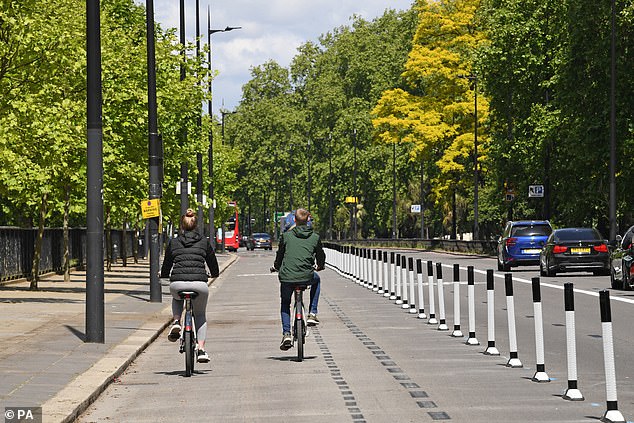 By David Churchill Transport Correspondent For The Daily Mail

Town halls are facing at least ten legal challenges against road schemes brought in during the pandemic.

Residents’ groups are applying for judicial reviews into measures such as road closures and pop-up cycle lanes at a High Court hearing next month.

The cases include schemes introduced in the London boroughs of Hackney, Ealing, Hounslow, Lambeth, Croydon and Camden which the campaigners want scrapped.

A hearing will take place on February 12 when Mr Justice Kerr will hear their objections and decide whether they can proceed to a full judicial review.

Residents’ groups are applying for judicial reviews into measures such as road closures and pop-up cycle lanes at a High Court hearing next month. Pictured: Pop-up cycle lane in Park Lane, London

It comes after a judge ruled that London Mayor Sadiq Khan’s guidance to town halls on setting up the measures was ‘unlawful’ and ‘irrational’ and ordered it to be quashed.

David Matthias QC, who will represent some of the residents at next month’s hearing, said: ‘Ten are in the pipeline. There are residents who really are very frustrated at these schemes.’

Locals in Ealing, west London, have managed to raise £36,500 since November to fund their challenge while another group fighting measures introduced in Croydon, south London, has raised £8,100.

Opposition is also mounting in areas outside of the capital.

In Edinburgh residents are threatening legal action against plans for four miles of segregated lanes through the city.

On Wednesday Mrs Justice Lang ruled guidance issued by Transport for London, headed by Mr Khan, for setting up the temporary schemes had been ‘unlawful’, ‘seriously flawed’ and ‘not evidence based’.

She said using the pandemic as justification for bringing them in was ‘irrational’. They were designed to drive down car use and increase walking and cycling. 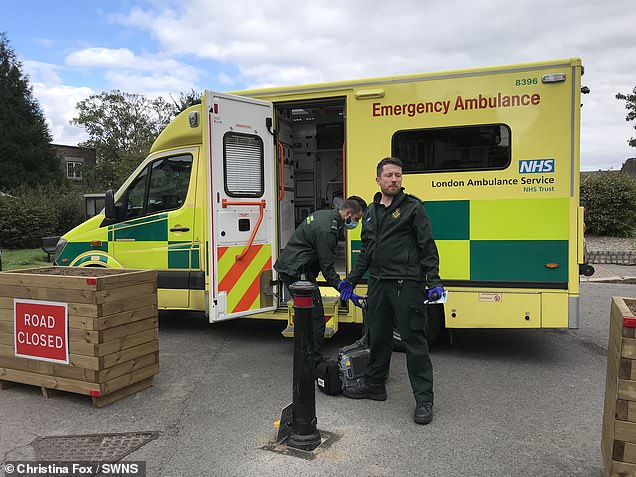 Paramedics were impeded in September last year by a new one-way system in Ealing, West London, which stopped traffic entering the road from one end – after they were called to the scene when a man was found unconscious by residents

But the judge ruled elderly and disabled people who may not be able to walk or cycle had been discriminated against.

Craig Mackinlay, the Conservative MP for South Thanet, criticised the mass roll-out of schemes across the country.

Speaking on BBC Radio 4’s World at One yesterday he said: ‘We saw a multitude of schemes that were not consulted on at all, they were in ridiculous places and they were objected to by local businesses who found that their short-term stop-and-pick-up trade completely disappeared.

‘We have congested roads in every town and city and I think the judgment in London has highlighted very well some of the things that are going wrong.’

The Department for Transport announced £175million for the expansion of LTNs in November, on top of £250million last May.