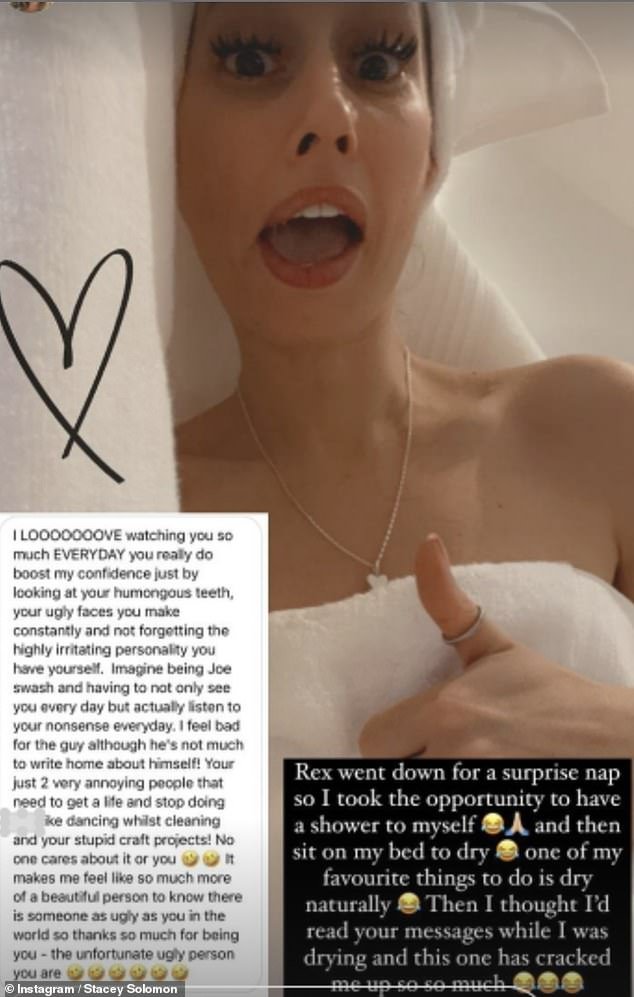 Stacey Solomon has hit back at a troll who called her ‘ugly and irritating’ by defiantly dancing around her home and singing to anthem I Am What I Am.

The Loose Women star, 31, shared on Thursday that she’d received a mean message telling her to ‘stop doing s**t like dancing whilst cleaning… as no one cares’.

However the mum-of-three brushed off the comments, saying they had ‘cracked her up’, and instead posted a cheeky video which she knew the person ‘would love’.

Brushing it off: Stacey Solomon has hit back at a troll who called her ‘ugly’ by posting a cheeky video doing the things they slammed as ‘irritating’

Stacey kicked off her clip by hiding behind her long locks and emerging as she pushed her feet towards the camera.

She also beamed a huge smile as she larked around in her home while singing into her vacuum cleaner and hiding behind plants.

As she danced and mimed along to the hit track, Stacey penned that she ‘couldn’t resist’ making the clip adding that she ‘knows how much that person loves these and bringing happiness to even the meanest souls is important’.

Finishing the entertaining video, she wrote: ‘Happy Thursday everyone! No one can make you feel anything without your permission. Don’t give them your permission’. 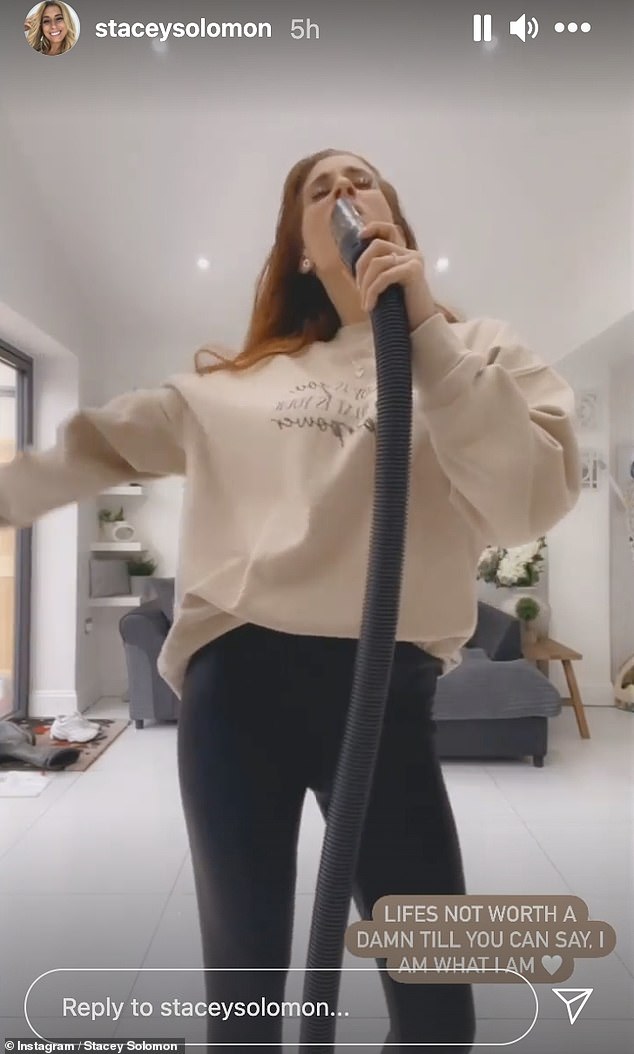 Going for it: The Loose Women panellist, 31, said the message had ‘cracked her up’ and quickly got to performing a hilarious routine with her vacuum cleaner to song I Am What I Am

The clip had been sparked by a very strongly written message Stacey had received in a DM to her account, which boasts 4.1m followers.

The person sarcastically said they ‘love’ watching Stacey as her content ‘boosts their confidence knowing there’s someone ‘as ugly as you in the world’.

‘I LOOOOOOVE watching you so much EVERYDAY you really do boost my confidence just by looking at your humongous teeth, your ugly faces you make constantly and not forgetting the highly irritating personality you have yourself,’ they penned. 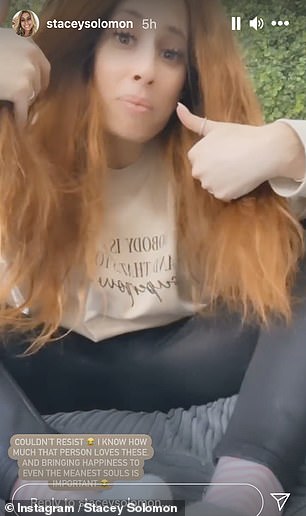 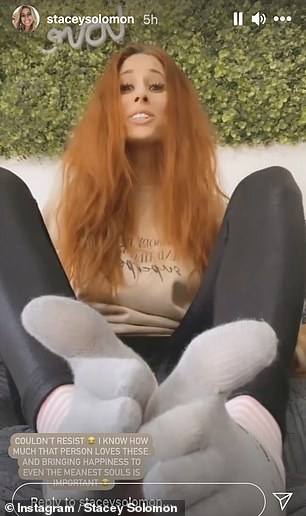 ‘Couldn’t resist I know how much that person loves these’: Stacey kicked off her clip by hiding behind her long locks and emerging as she pushed her feet towards the camera. 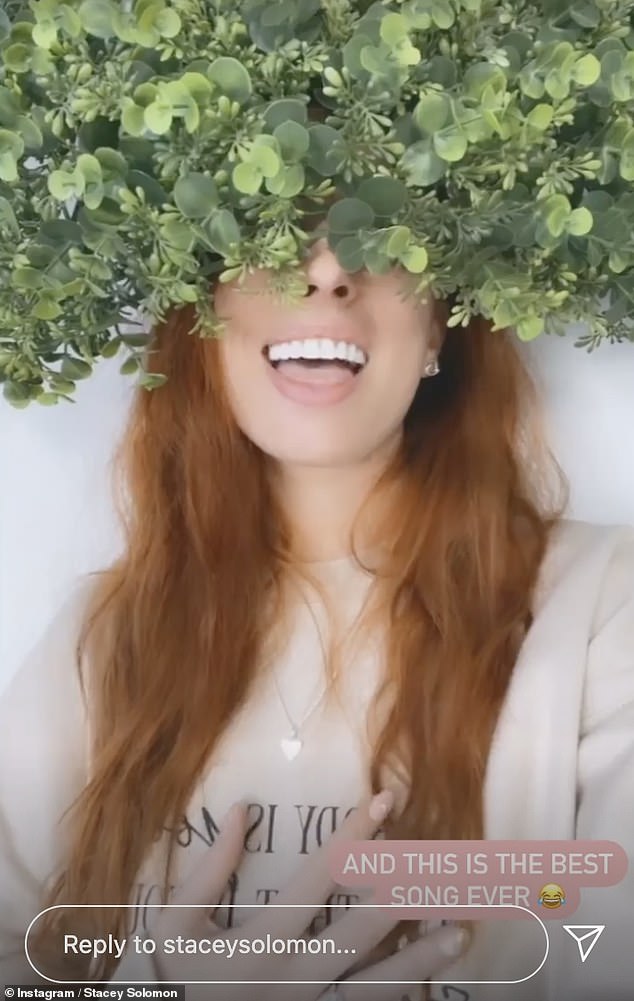 In disguise: Another moment saw the mum-of-three hide under some of her home’s plants

They also made a dig at Stacey’s fiancé Joe Swash, saying he has to ‘actually listen’ her, and adding: ‘I feel bad for the guy although he’s not much to write home about himself!

‘Your just 2 very annoying people that need to get a life and stop doing s**t like dancing whilst cleaning and your stupid craft projects! No one cares about it or you!’

It comes after Stacey called out the ‘glove police’ after being trolled for letting her son Rex play in the snow with ‘freezing hands’.

The beauty hit back last Wednesday after some of her followers noted that her youngest child, 19 months, didn’t have his hands covered in a new video. 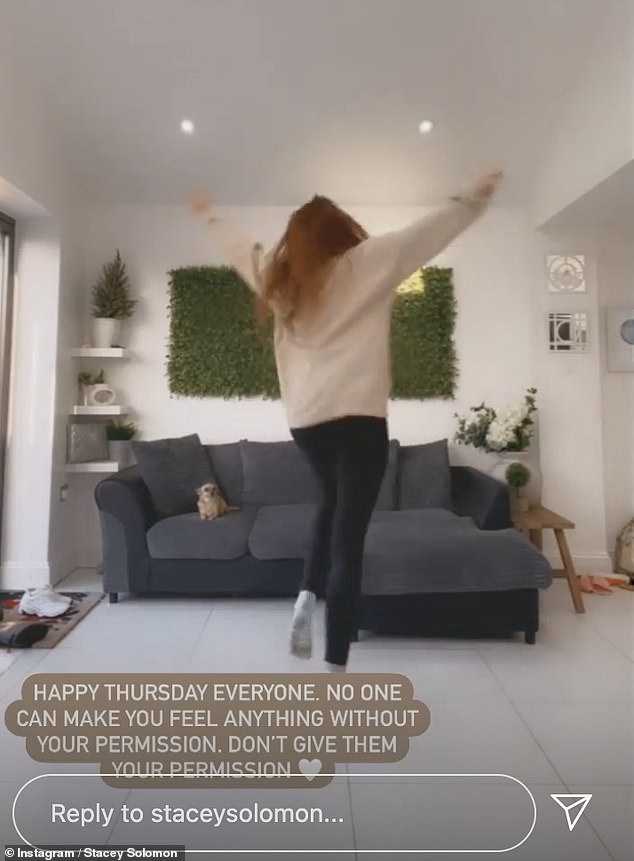 Love yourself! Stacey wished her fans a happy Thursday as she larked around the living room 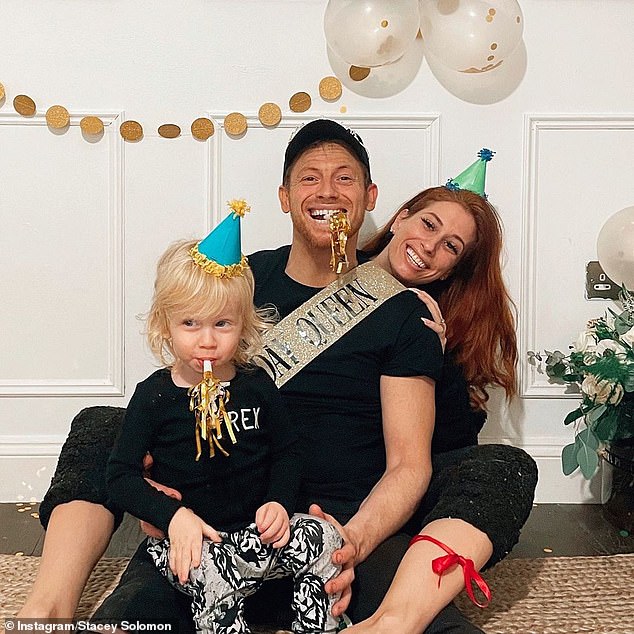 Family: The troll also made a dig at Stacey’s fiancé Joe Swash, saying he has to ‘actually listen’ her (pictured with their son Rex, 21 months)

Stacey took to Instagram to respond to the criticism, explaining it was impossible to get little Rex to keep his cold weather gear on in the snow.

Along with her other sons, Zachary, 12, and Leighton, eight, Stacey took Rex to play in the woods nearby to their Essex home, during a half-day off from home schooling.

After uploading adorable footage of their family time to her Stories, the Loose Women star shared a screenshot of Rex in the show and added the caption: ‘A message to the glove police!’

She also included a scathing DM which a follower had sent to her, which read: ‘Why is your child not wearing gloves! His hands look freezing!!!’ 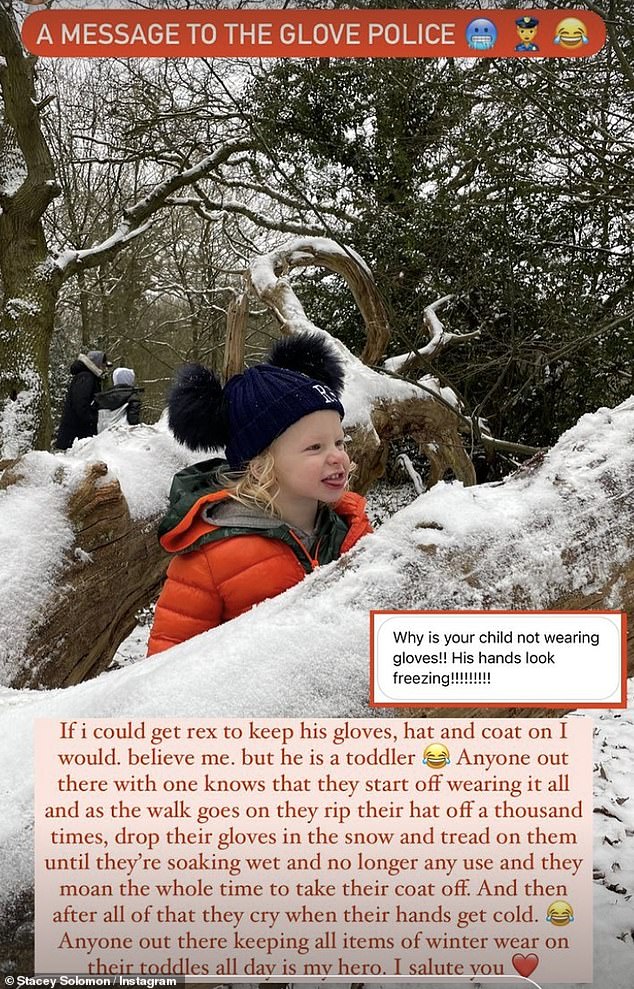 Hitting back: It comes after Stacey called out the ‘glove police’ after being trolled for letting her son Rex play in the snow with ‘freezing hands’ last week

Stacey called out the troll for the criticism, and praised parents who manage to keep their kids wrapped up.

She wrote: ‘If I could get Rex to keep his gloves, hat and coat on I would. Believe me. But he is a toddler!

‘Anyone out there with one knows that they start off wearing it all and as the walk goes on they rip their hat off a thousand times, drop their gloves in the snow, and tread on them until they’re soaking wet and no longer any use and they moan the whole time to take their coat off.

‘And then after all of that they cry when their hands get cold. Anyone out there keeping all items of clothing of winter wear on their toddlers all day is my hero. I salute you.’ 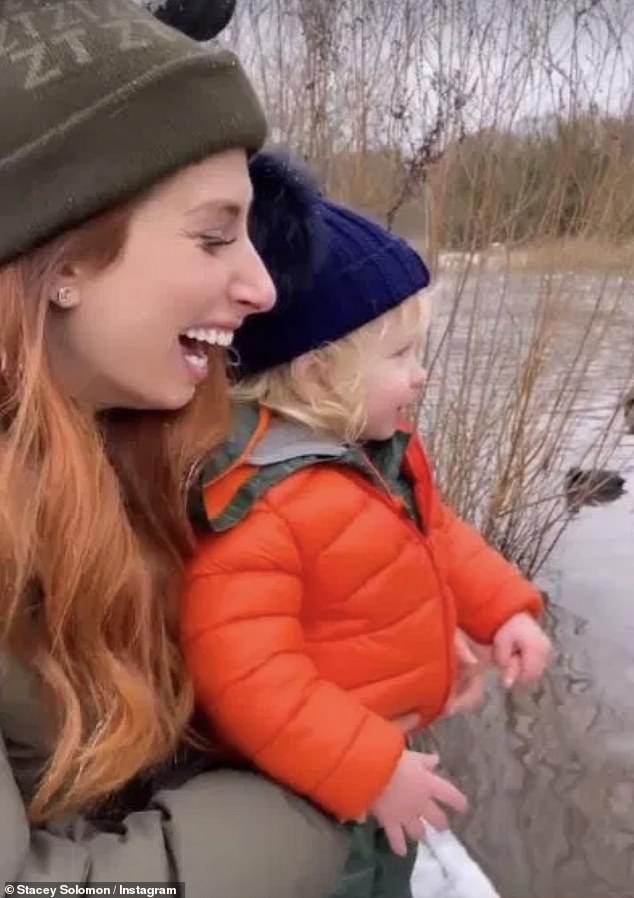 Glove Police! The Loose Women panellist hit back after some of her followers noted that her youngest child, 19 months, didn’t have his hands covered in a video