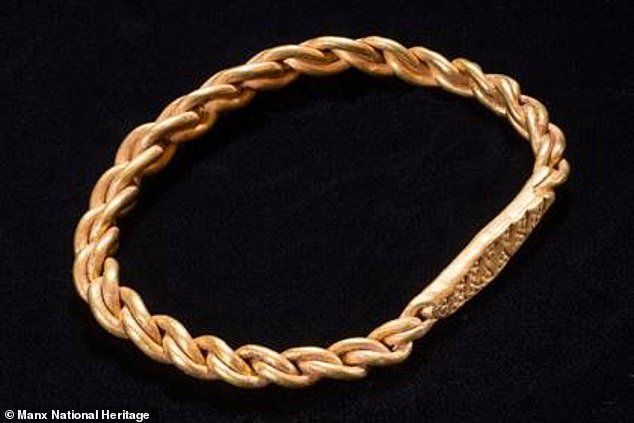 A valuable hoard of ancient Viking artefacts including a gold arm-ring and a ‘massive’ silver brooch believed to have been buried over 1,000 years ago has been discovered on the Isle of Man by a metal detectorist.

The rare collection, likely to be worth several thousand pounds, was officially declared treasure by the Island’s Coroner of Inquests Jayne Hughes and is set to go on display at the Manx Museum in Douglas.

The internationally significant find, which also includes at least one silver armband among other precious items, was buried around AD 950.

It was discovered on private farmland in the north of the island in December last year by metal detectorist and retired police officer Kath Giles, who admitted she knew she’d come across ‘something very special’.

A valuable hoard of ancient Viking artefacts including a gold arm-ring (pictured) and a huge silver brooch buried over 1,000 years ago has been found on the Isle of Man by an amateur metal detectorist

‘I’m so thrilled to have found artefacts that are not only so important, but so beautiful!’ she said.

‘I knew I had found something very special when I moved the soil away from one of the terminals of the brooch, but then I found parts of the pin, the hoop and underneath, the gorgeous gold arm-ring.

‘I knew straight away that it was a significant and exciting find.’

The gold arm-ring is made from three plaited rods of gold, with both ends merging into a flat lozenge-shaped band that has been decorated all over with a stamped design of groups of three dots.

Any discoveries of archaeological interest on the Isle of Man must be reported to Manx National Heritage within two weeks. If items are legally classified as treasure, they belong to the crown and the finder is rewarded.

Allison Fox, curator for archaeology for Manx National Heritage said: ‘We received a telephone call from Kath late last year, and with Kath’s help, we were able to document the site and ensure there were no further objects remaining in the ground. 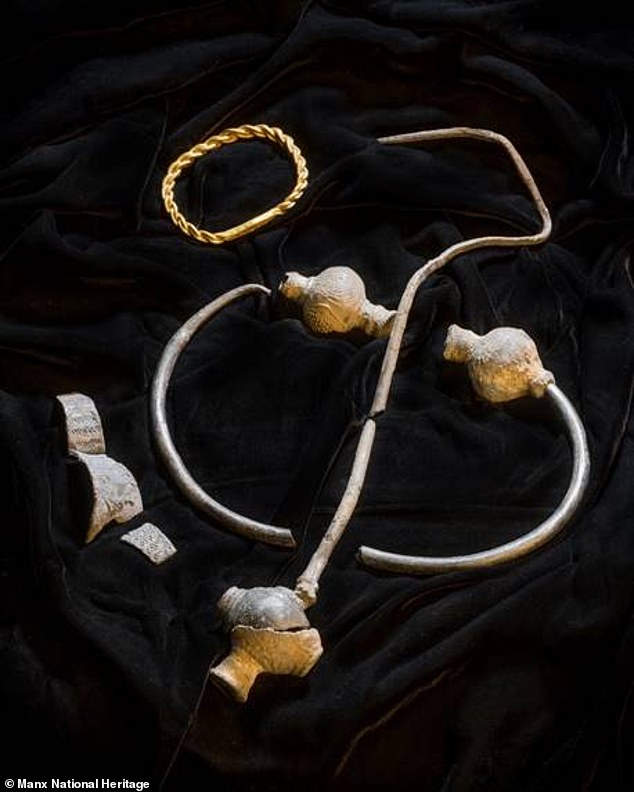 ‘The arm-ring is a rare find. Gold items were not very common during the Viking Age. Silver was by far the more common metal for trading and displaying wealth.

‘It has been estimated that gold was worth 10 times the value of silver and that this arm-ring could have been the equivalent of 900 silver coins.’

The silver brooch is a type known as a ‘thistle brooch of ball type’. It is large – the hoop is c.20cm diameter and the pin is c.50cm long.

Although bent and broken and with just some small pieces missing, the brooch is complete. It would have been worn at the shoulder to hold heavy clothing such as a cloak in place, with the point of the pin upwards.

The brooch is one of the largest examples of its type ever discovered. It has intricate designs on the pin and terminals and as with the arm-ring, the accessory would have been an immediate visual indicator of the wealth of the owner. 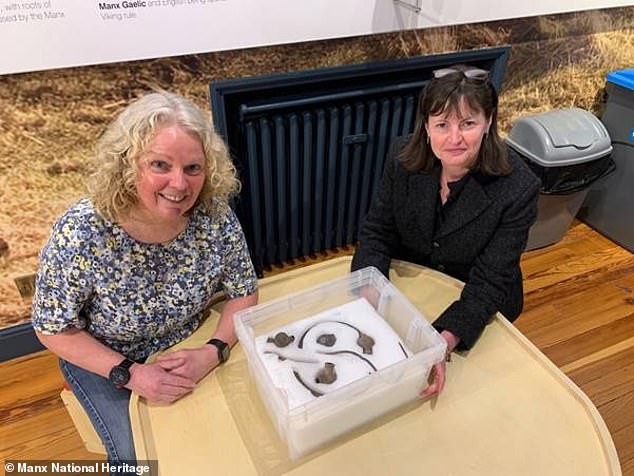 It may not have been for everyday use. The type is thought to have originated in the Irish Sea area – it is possible that the brooch was made on the Isle of Man.

The hoard also included the remains of at least one decorated silver armband, cut in antiquity.

In the past, similar items of Viking jewellery have been valued at £1,500 per piece, with a larger collection of treasure found in Lancashire in 2011 deemed to be worth £110,000.

Both whole and cut items of Viking Age gold and silver jewellery have previously been discovered on the Island. Most of these have been the result of deliberate deposition of ‘hoard’ material, presumably buried during a time of threat, with the intention by the original owner to reclaim the artefacts at a later stage.

However, this arm-ring and brooch are the first of their type to be found on the Island and add significantly to the picture of wealth circulating on the Island and around the Irish Sea area in general over one thousand years ago.

Earlier discoveries of Viking Age gold arm rings from the Island include one found with the Ballaquayle Hoard in Douglas in the 1890s, which was much simpler in design. 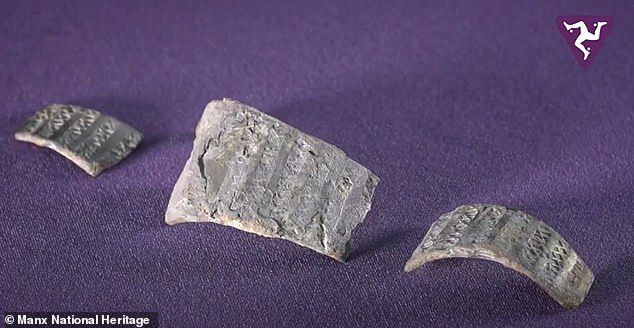 The internationally significant find, which also includes at least one silver armband (pictured) among other precious items, was buried around AD 950

Three Viking Age gold finger rings have previously been discovered on the Isle of Man and one complete gold ingot. These suggest that there may have been some gold-working on the Island during the Viking Age and that the Island was home to some particularly wealthy people back then. This gold arm-ring reinforces these theories.

Allison explained: ‘Vikings arrived on the Isle of Man in the 800s, firstly trading and eventually settling.

‘Kath’s hoard can be dated on stylistic and comparative grounds to around AD 950, a time when the Isle of Man was right in the middle of an important trading and economic zone.

‘But elsewhere to the east and west, Viking rule was coming to an end and perhaps this encouraged further Viking settlement on the Island.

‘The Viking and Norse influence remained strong on the Island for a further three hundred years, long after much of the rest of the British Isles.

‘The arm-ring, brooch and cut armband are all high-status personal ornaments and represent a large amount of accumulated wealth. Finding just one of these items would be of significance.

‘The fact that all were found together, associated with one single deposition event, suggests that whoever buried them was extremely wealthy and probably felt immediately and acutely threatened.’

She added: ‘Manx National Heritage would like to sincerely thank both the finder and landowners for all their support and assistance with this remarkable discovery.’

The location of the find and details of the landowner will remain confidential to protect the integrity of the find site.

The ‘Kath Giles’ hoard will go on display in the Viking and Medieval Gallery at the Manx Museum from today prior to valuation and further conservation work.

The Isle of Man lifted its lockdown rules earlier this month following a 25 day circuit-breaker after an outbreak of Covid-19 cases around New Year.

However, seven new cases of coronanvirus, including a ferry crew member, have been detected on the Island today – six of which were found through the contact tracing process.

All have been told to self-isolate, a government spokesman said. Chief Minister Howard Quayle is holding a briefing this evening to address the Island’s response, but a further lockdown is currently not on the cards.