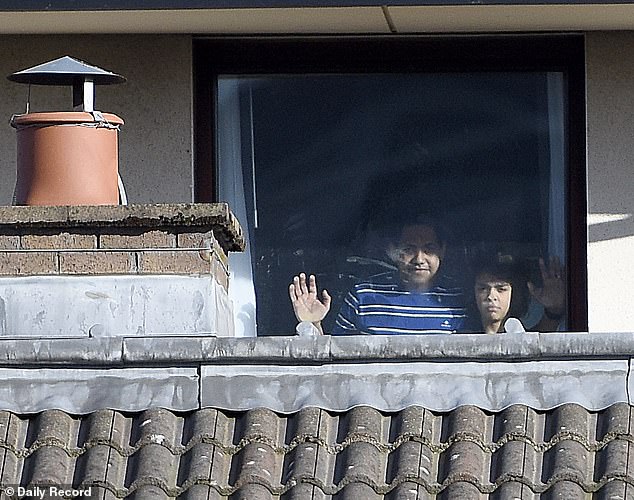 Unaccompanied boy, 10, is told he must quarantine after flying ALONE into UK from Finland to see his father – as his British relative is forced to leave home to join him in £2,400 hotel

A father has criticised Scotland’s quarantine rules after he was forced to pay £2,400 to isolate in a hotel with his ten-year-old son who flew into the country alone.

Antonio Caraballo from Marchmont, Edinburgh, was forced to check into the DoubleTree by Hilton hotel in his home city to quarantine with his son Sami, who travelled unaccompanied from Helsinki, Finland, on Saturday.

The father, 44, will quarantine inside the hotel with his son for 11 days of the two-week trip, during which time the pair are only being allowed outside for a 15-minute walk in the car park each day.

Mr Caraballo said he had last seen his son, who lives with his mother in Finland, in October for his son’s birthday and that Sami had come to Edinburgh to visit him and his three-year-old sister.

Antonio Caraballo from Marchmont, Edinburgh, was forced to check into the DoubleTree by Hilton hotel in his own city to look after after his son Sami (pictured together)

The family had wrongly believed that Sami would be allowed to quarantine at his father’s home as he is a child.

He told the Daily Record: ‘We are just very frustrated with the whole situation.

‘If we had cancelled the flight and flown him to London there would have been a loophole but we thought this was the right thing to do and the least risk.’

The father, who works for an oil and gas company, complained that the measures were ‘draconian’ and said the family had struggled to contact authorities about the situation.

When the quarantine period is up Mr Caraballo will have to test negative for Covid before being allowed out of the hotel, Sami is not required to take a test due to his young age.

Mr Caraballo added that his son’s mental health had already been suffering having not seen him for months.

He added that Sami had ‘lost his appetite’ whilst staying at the quarantine hotel – meaning his wife has had to drop food off at the hotel for the youngster to eat.

The family had wrongly believed that Sami would be allowed to quarantine at his father’s home as he is a child, but instead they were told to book into the Hilton Double Tree in Edinburgh

Scottish Labour MSP for Edinburgh Southern, Daniel Johnson, told the Daily Record: ‘This is an extremely distressing experience for a ten-year-old child already struggling with mental health problems. To be kept away from other family members for ten days – only to have just a few days with them before returning home – will be tough to bear.

‘Scottish Labour has repeatedly highlighted the problems around the SNP ‘s hastily-conceived quarantine policy – and the problems it could create for travellers – and have called for more clarity around the regulations and exemptions so that travellers know exactly what to expect before they travel.’

A Scottish Government spokesman said: ‘We understand how difficult this is for families with children, but to manage the risk of importing new variants and to give vaccine deployment the best chance of bringing us closer to normality these limits on international travel are necessary.

‘The clinical advice is clear that a comprehensive system of managed quarantine is essential to minimise the impact of new COVID-19 variants. This means children must enter managed isolation regardless of whether they are accompanied or unaccompanied. We must restrict how many exemptions are in place otherwise the policy will not be effective.’