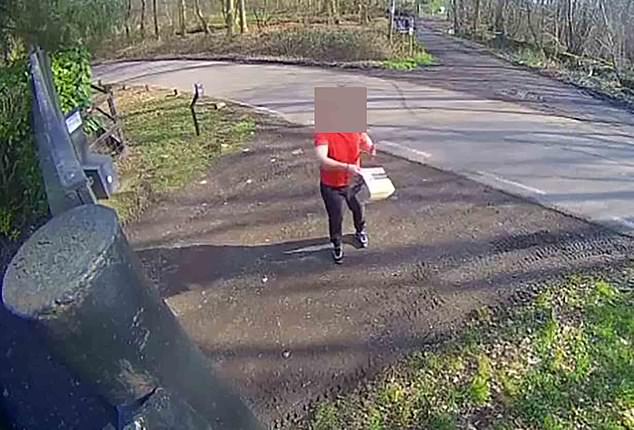 By Isabella Nikolic For Mailonline

An Amazon delivery driver has been caught on CCTV lobbing a parcel at a customer’s security gate even though there was a postbox just metres away.

Angered shopper Yana Holmwood saw the shocking footage of the driver trying to hurl the parcel over the gate of her home in Stock, Essex, on Sunday.

The courier can be seen approaching the eight-foot gate clutching the Amazon parcel while a large mailbox is seen to the side of the gate.

He checks his phone at the rear of his white van before making his way towards the security gate.

Angered shopper Yana Holmwood saw the shocking footage of the driver trying to hurl the parcel over the gate of her home in Stock, Essex, on Sunday

Standing quite a distance away, he then lobs the box at the large security gate – instead of placing it in the mailbox which is beside the gate.

The brown Amazon box smashes against the top of the gate and lands back to the ground with a clatter.

He then paces backwards and then returns to his van.

Another video taken one minute later shows him returning to the gate and quickly tossing the package over the fence.

Ms Holmwood shared her video of the incident onto Facebook later on that day, captioning her post: ‘I was lucky to get my Amazon parcel today… Shocking service by this driver: 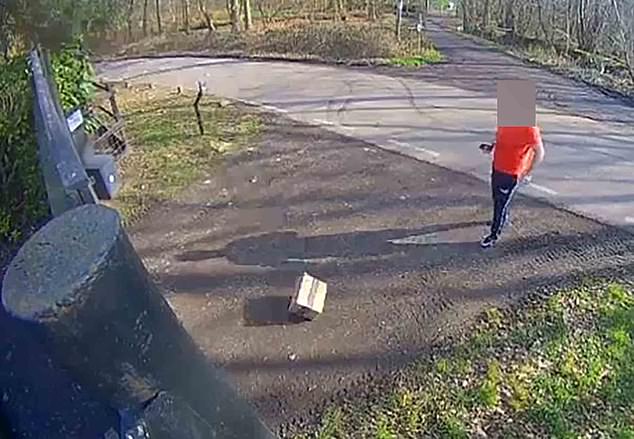 ‘1) The grey post box is in view next to the gate. This parcel fits in that box yet the driver never attempted it.

‘2) There’s a keypad with a call button at the gates. No attempt by this useless driver to call it. We were at home.

‘3) There is a 2nd video… After being spotted by a passer by, the driver went back and successfully threw the parcel over the gate.

‘There’s dogs on the other side. If we hadn’t been home and seen that parcel fly over the gate, it would have been destroyed by the dogs.

‘This driver is totally incompetent!’ 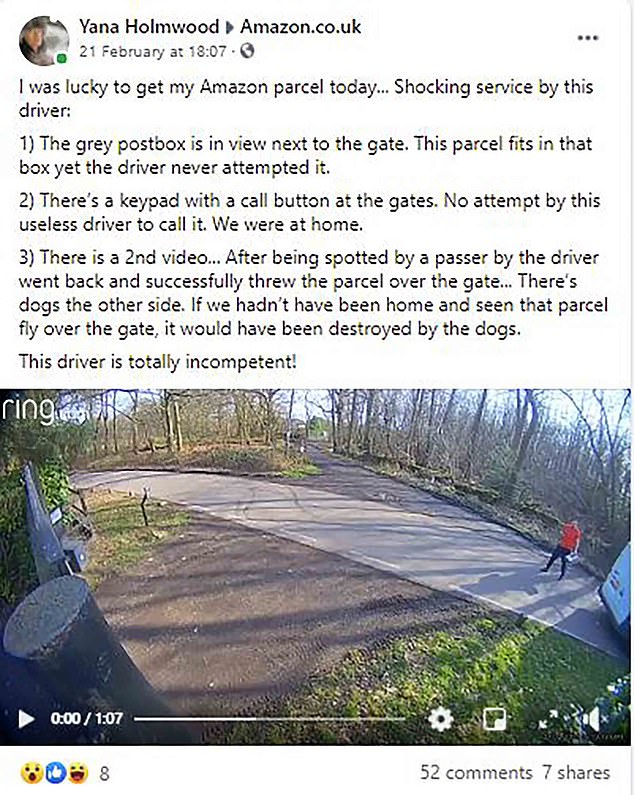 ‘It was 30 pretty ribbon tied gift bags. The fact it wasn’t breakable wasn’t the point though.

‘He went back after being seen and made a second success attempt to throw it over.

‘Two of our dogs were out at the time and if we hadn’t had a call from a neighbour to say he’d seen him throw it, we wouldn’t have looked out the door to see it come over the gate and the dogs would of likely ripped it up seeing it as something to play with.’

An Amazon spokesperson said: ‘We have very high standards for our delivery partners and expect every package to be handled with care.

‘We’ve notified the right teams internally and are working with the customer directly on matters related to their package delivery.’