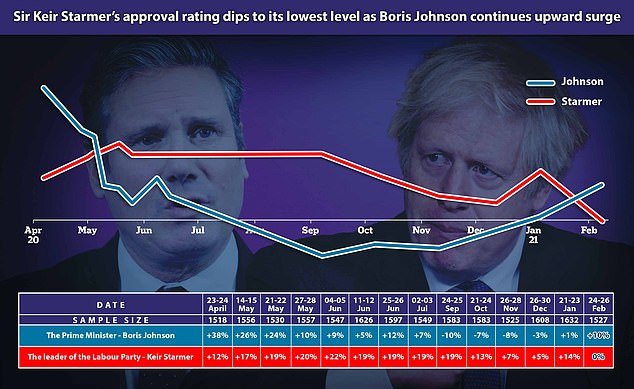 Sir Keir Starmer‘s approval rating has fallen to its lowest level as the Labour leader faces a party split over his opposition to increasing corporation tax.

A new survey conducted by Deltapoll showed Sir Keir has a net approval rating of zero.

But Boris Johnson has continued his upward surge, with the PM pulling ahead of his counterpart for the first time since last May, recording a number of plus 10.

The dire poll numbers for Sir Keir came as he faces Labour tension over his decision to oppose a corporation tax hike.

Chancellor Rishi Sunak is widely expected to announce an increase in the business levy at the Budget on March 3, from the current rate of 19 per cent to potentially as high as 25 per cent.

But Sir Keir has demanded the Government rule out any tax rises on firms or families this year as the country tries to recover from the coronavirus crisis.

Shadow chancellor Anneliese Dodds today insisted ‘now is not the time for immediate tax rises’ as she hinted Labour could back a corporation tax hike in the future.

However, there is a growing split in the party on the issue because some Labour MPs believe they should be supporting the increase, arguing it is a progressive tax. 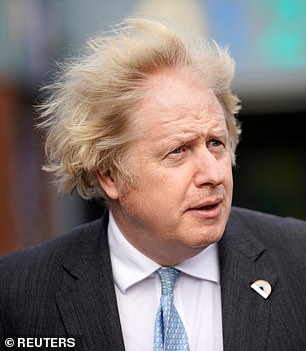 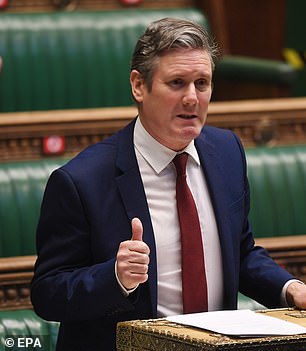 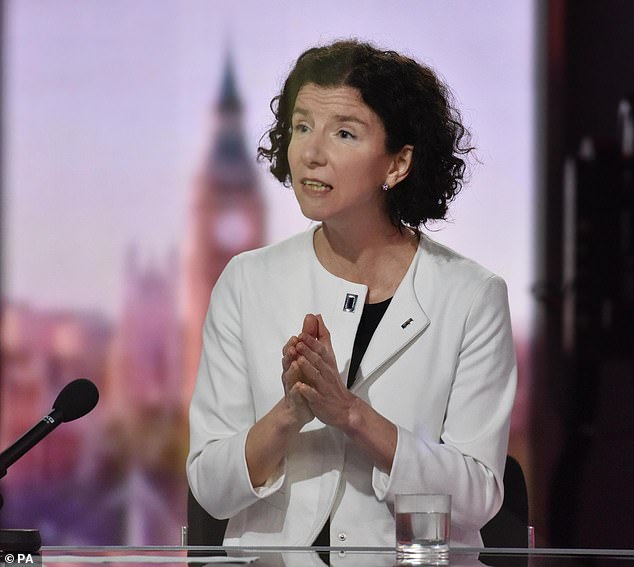 Shadow chancellor Anneliese Dodds today insisted ‘now is not the time for immediate tax rises’ as she hinted Labour could back a corporation tax hike in the future.

Mr Johnson was as low as minus 10 last September in Deltapoll’s net approval ratings.

But he has broadly climbed upwards since then, hitting plus one in January and then plus 10 in February.

In September Sir Keir was on plus 19 but his rating fell to plus five in December before recovering to plus 14 in January. It has now fallen to zero.

Sir Keir is facing a key week in his leadership as he prepares Labour’s response to the Budget.

He told Mr Johnson at PMQs last week that ‘now is not the time for tax rises for families and for businesses’.

Ms Dodds echoed the same sentiment this morning when she answered questions following a speech in London.

She was asked whether she would vote against an increase in corporation tax in the short term, or if she would support a longer-term package of reform.

She hinted Labour could back a higher rate of corporation tax in the future as she said the party would ‘look with interest at any longer term plan’.

She said that over the last 10 years ‘Conservative-led governments have pulled the UK further and further away from the average corporation tax level of OECD nations’.

Ms Dodds added: ‘That hasn’t boosted investment in the UK. We have not seen it growing actually in the speed that it has in many other countries when it comes to private sector investment.

‘So we would look with interest at any longer term plan that the Conservatives might set out to deal with that issue, especially if we also see action taken towards business rates.

‘Now is not the time for immediate tax rises – it is the time for a Chancellor focused on jobs and securing our recovery.’