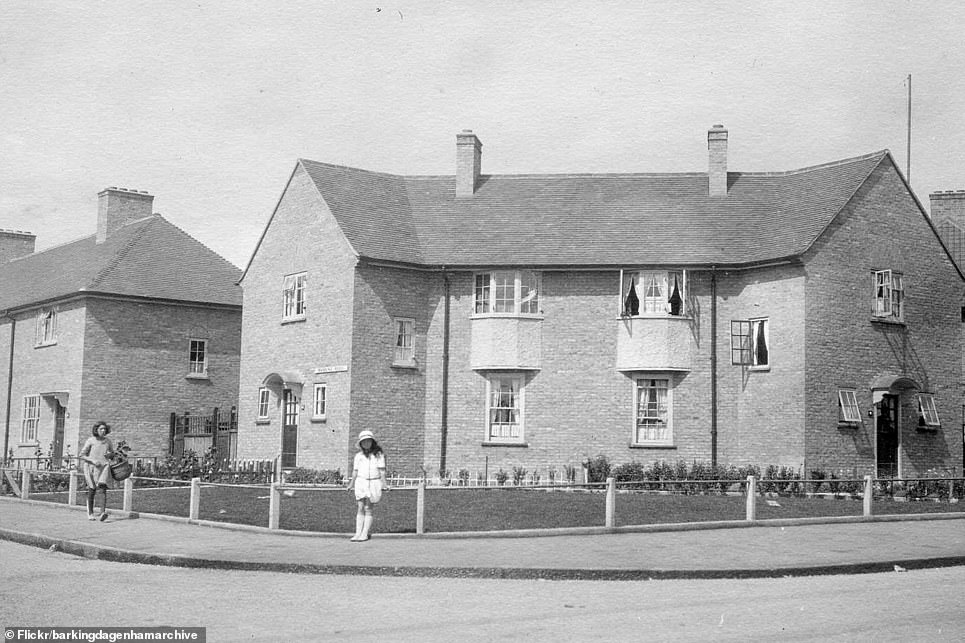 The centenary of an east London housing estate billed as the largest ever when it was built after the First World War is to be marked with a series of events.

Becontree in Dagenham was built for more than 100,000 war veterans and workers from east London, with the first ‘home for heroes’ completed in 1921.

Today, around 85,000 people live on the housing estate, with two playgrounds and a range of street furniture made from rubble among events being planned to celebrate.

The estate was seen as something of a modern Utopia when it was created, with each house having an inside toilet, a good bathroom and gardens front and back.

In the 100 years since, several famous names have grown up on the estate including football managers Alf Ramsey and Terry Venables, comedian Max Bygraves, actor Dudley Moore, and the former Archbishop of Canterbury, George Carey. 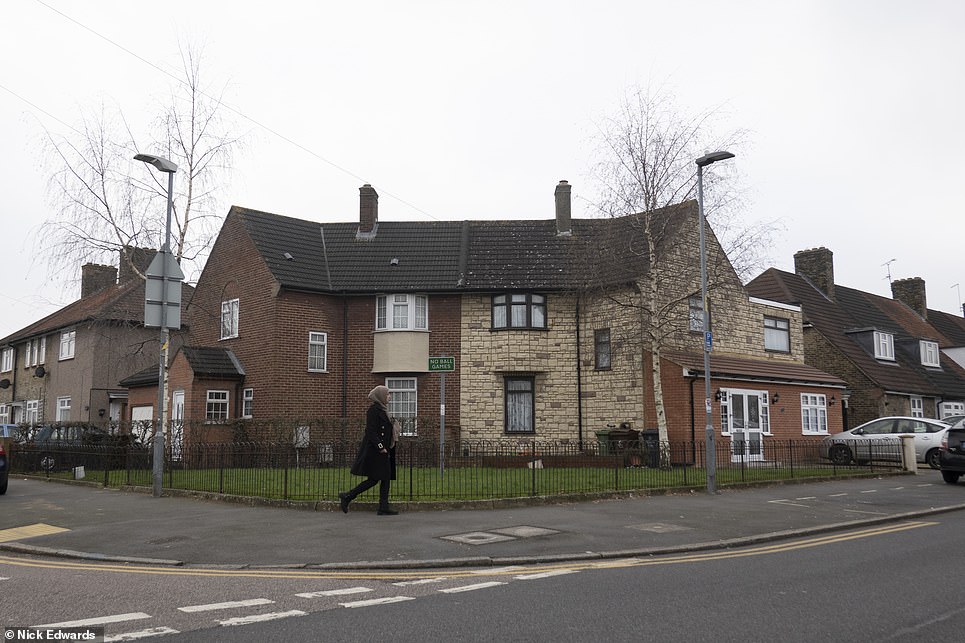 Pictured left is a corner of the estate in 1932. Right is the same spot today. Becontree in Dagenham was built for more than 100,000 war veterans and workers from east London, with the first ‘home for heroes’ completed in 1921 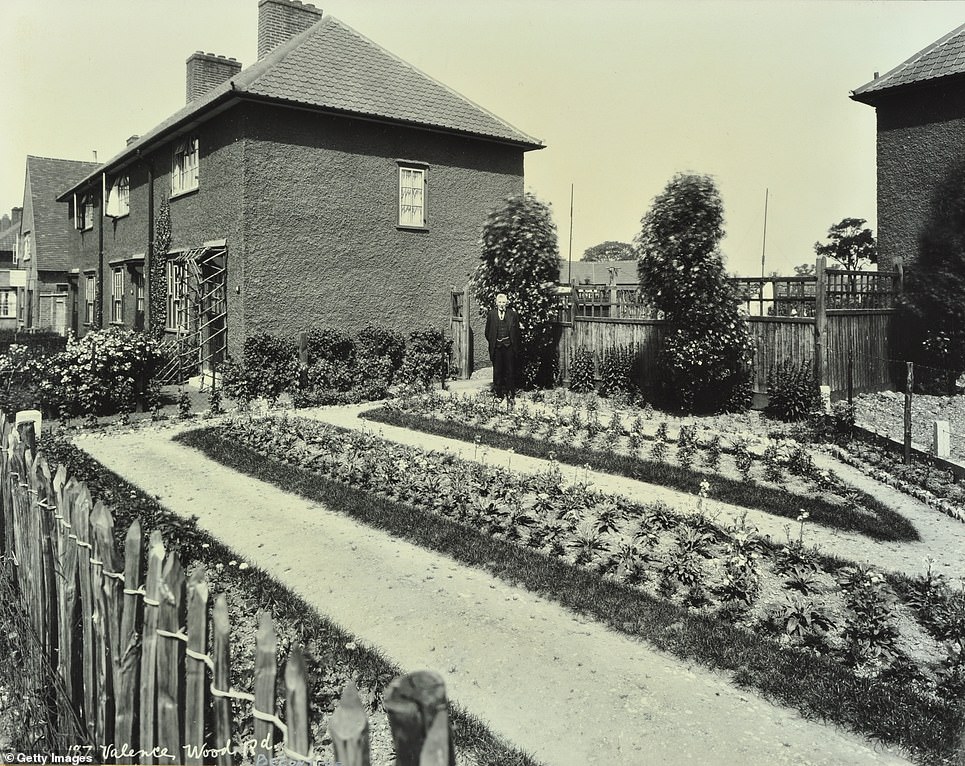 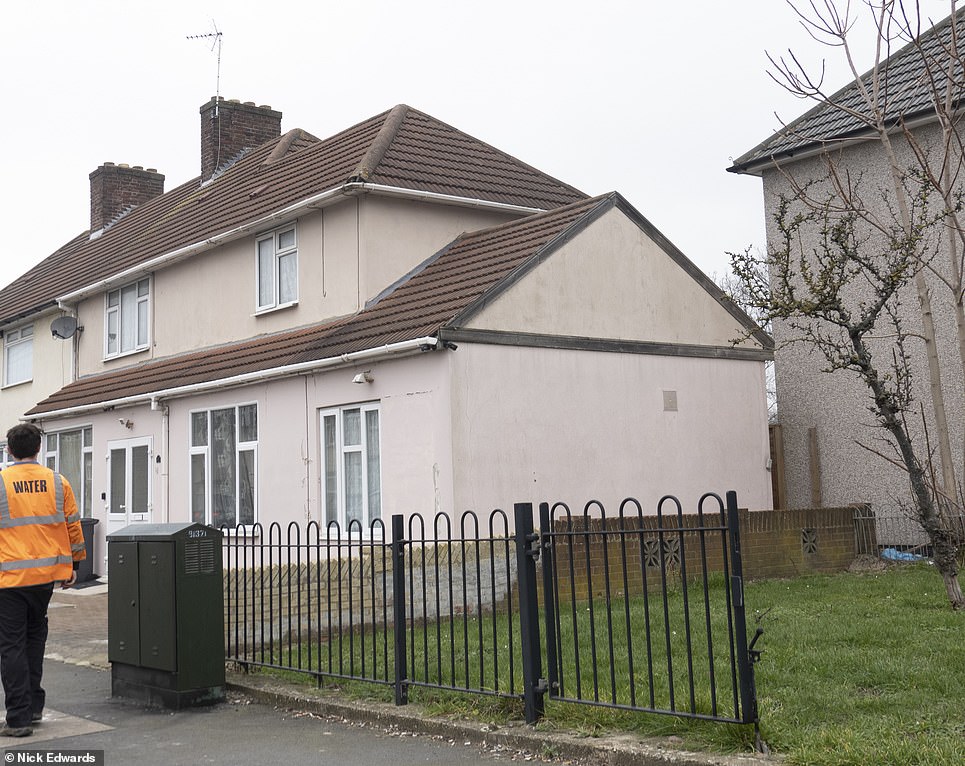 Left: Side elevation showing a garden from the estate which was entered into a competition. Right: The same spot today 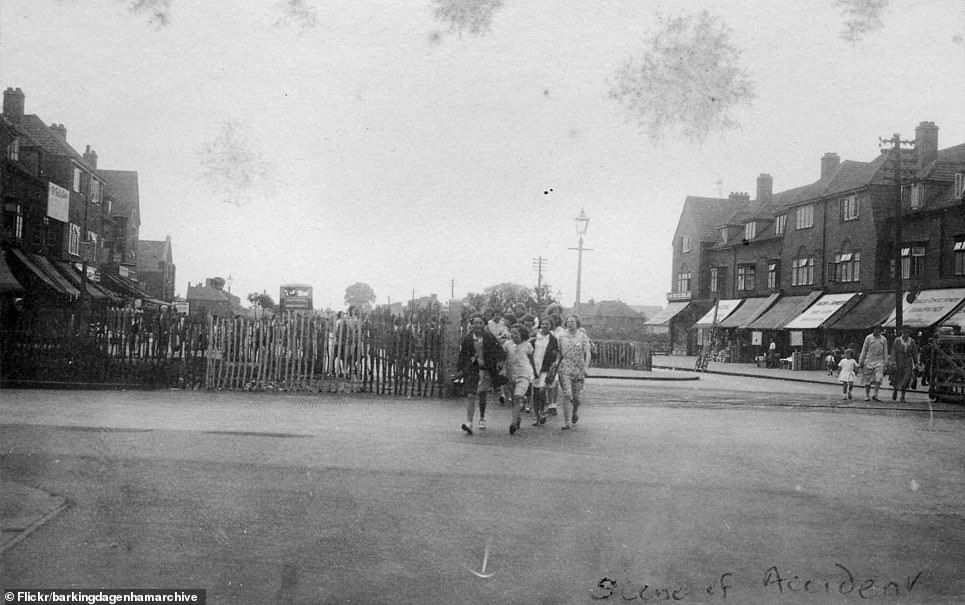 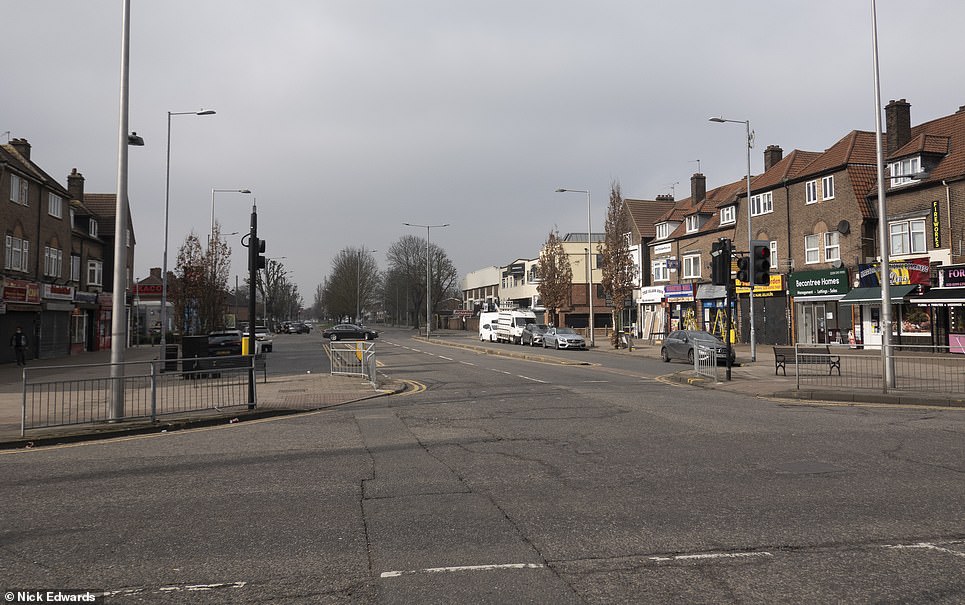 Children crossing the road on the Becontree Estate. The same spot looking very different in a photo taken on the street today 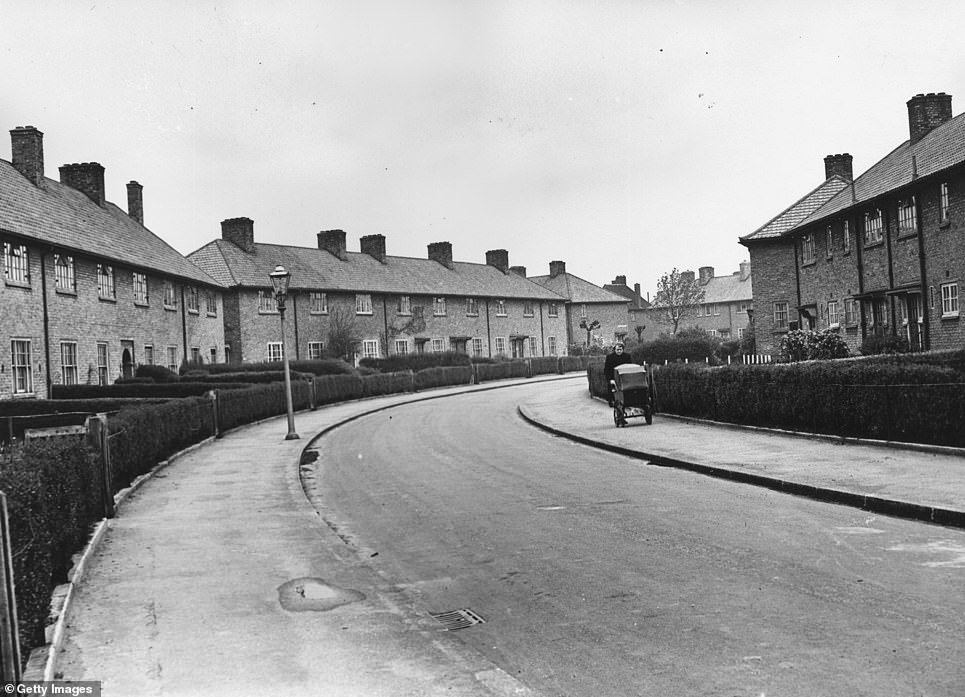 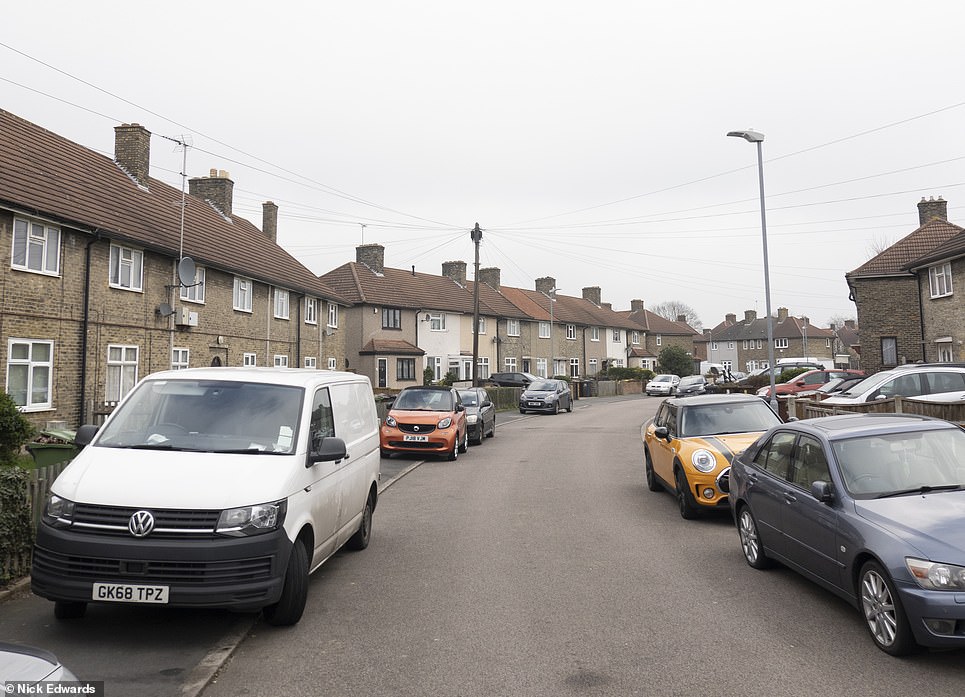 A crescent typical of the Dagenham and Becontree London County Council Estate pictured in 1950. The same street pictured today

Residents were drawn by the allure of a spacious home with running water, two to four bedrooms and a parlour.

However, they were told that windows were to be cleaned once a week, doorsteps must be scrubbed and children were banned from playing in communal gardens.

Any families that failed to meet these standards faced being thrown out of their homes.

Parents also had to ensure their children were kept under control, no washing could be hung from windows and front gardens had to be kept neat.

King George V visited the estate in 1923, as did Mahatma Gandhi, who visited a community centre.

Now, a third of the properties on the estate are let as social housing while three bedroom terraces are on the market for around £350,000.

Demographics have also shifted with almost half of Becontree residents now coming from black or minority ethnic backgrounds, many of them from Nigeria and Ghana. 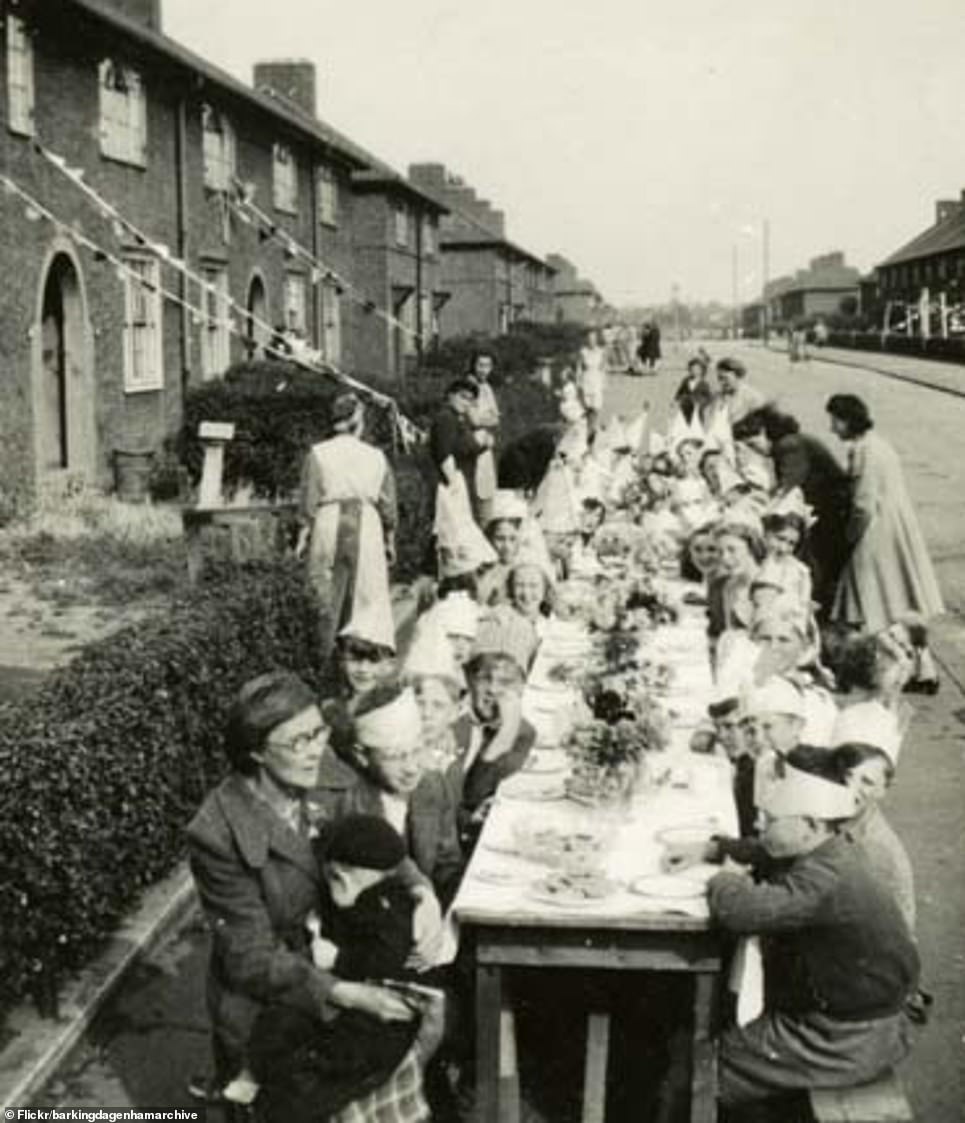 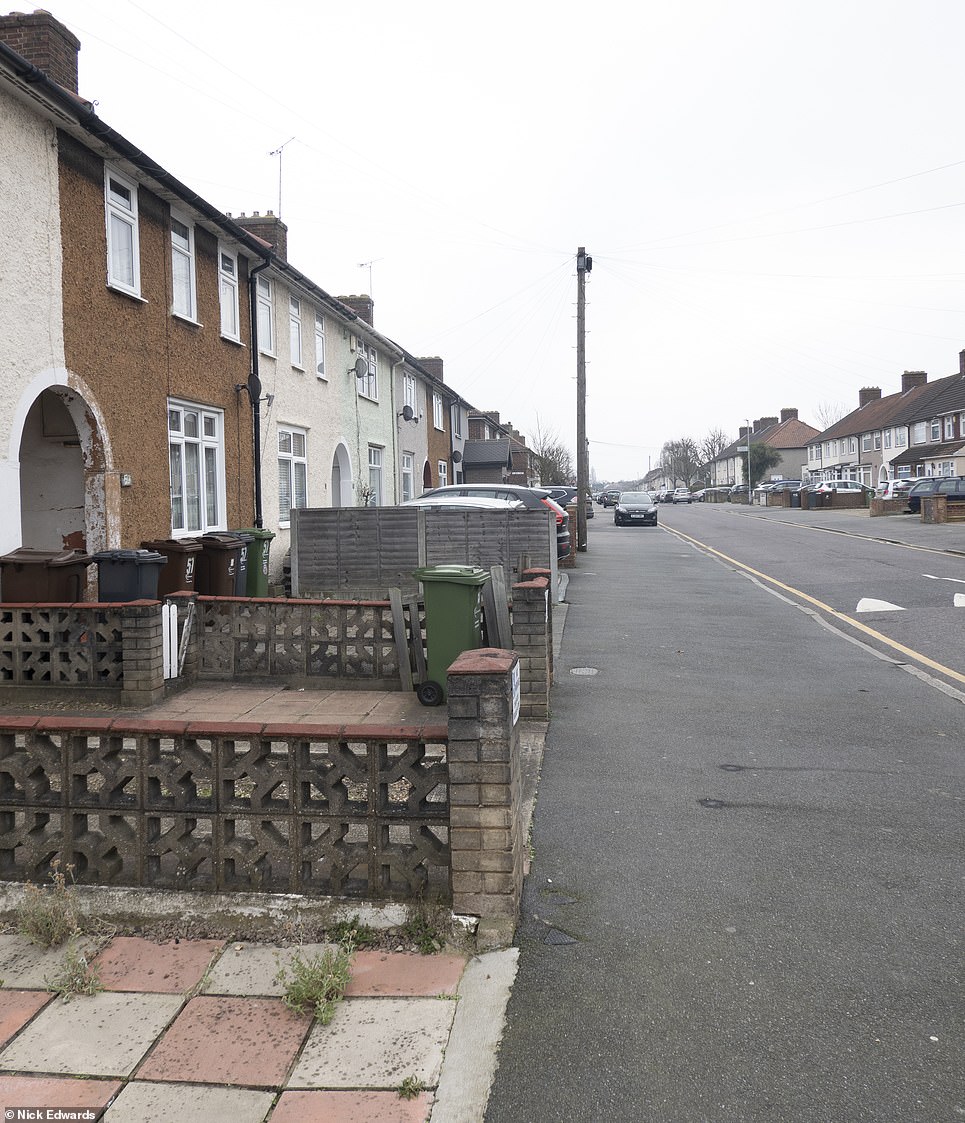 A VE day street party on Albion Road on the Becontree Estate in 1945. Pictured right is the same street in a photo taken today 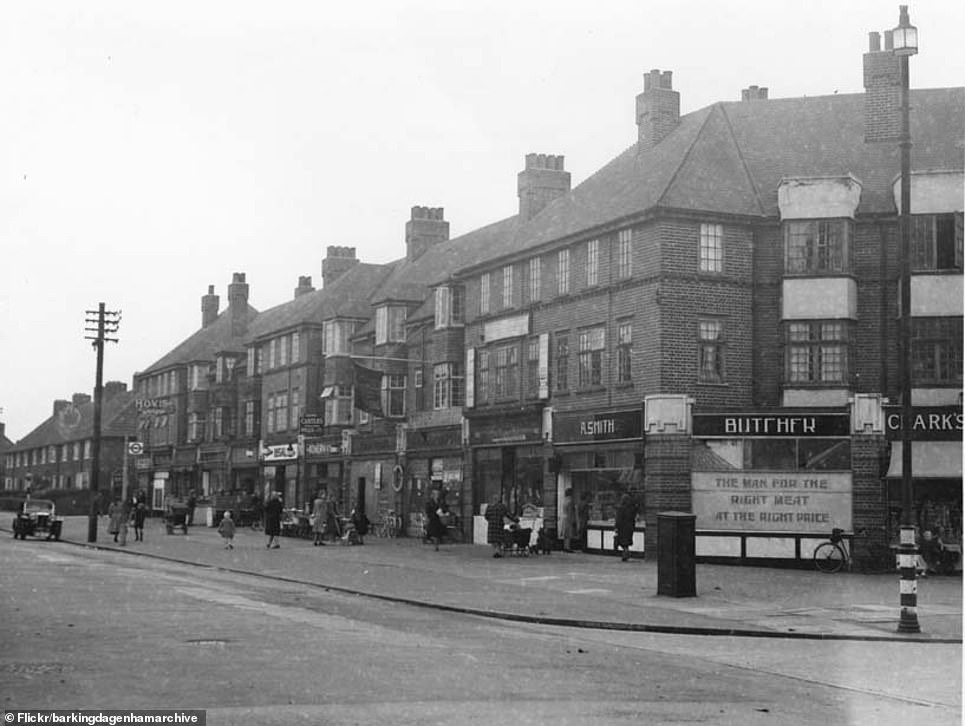 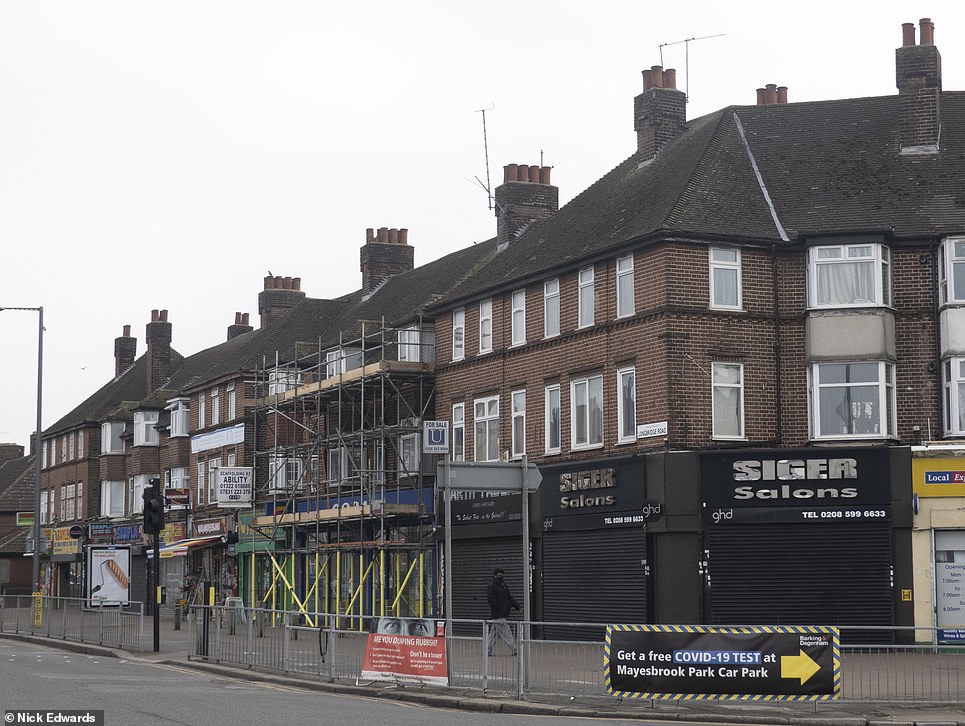 The shops on Longbridge road in the Becontree estate. Pictured right is the same spot today – complete with directions to a local Covid testing centre 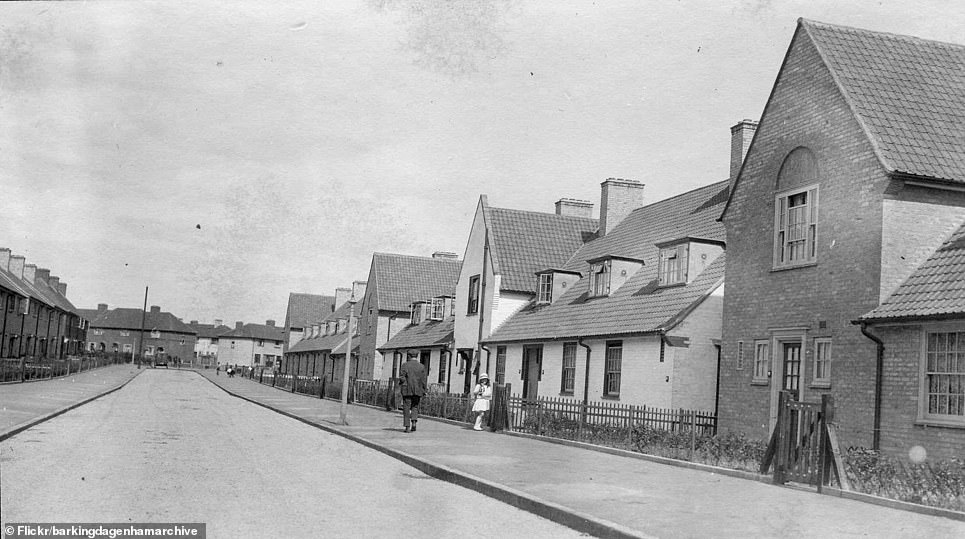 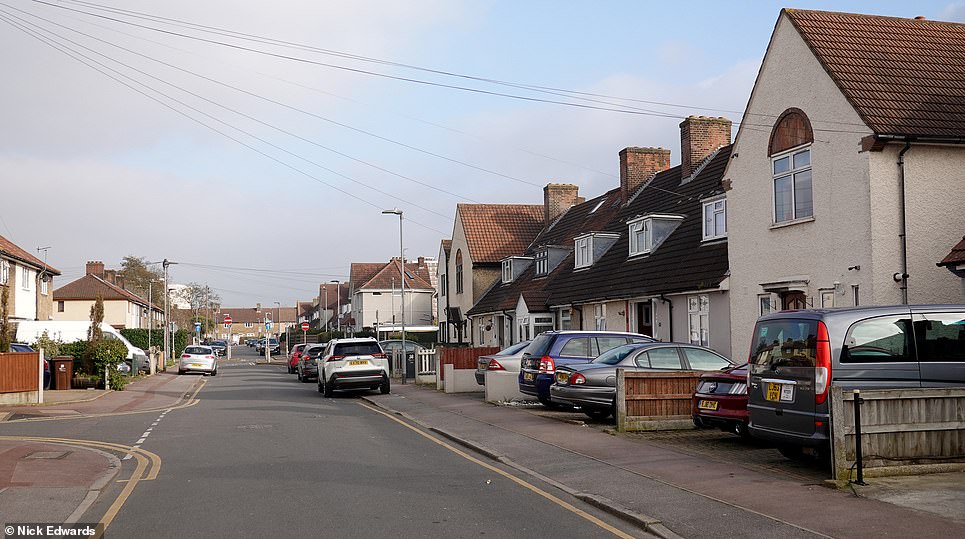 Some houses on the Becontree Estate in a photo taken in 1932 left, with the same spot looking very different today (right) 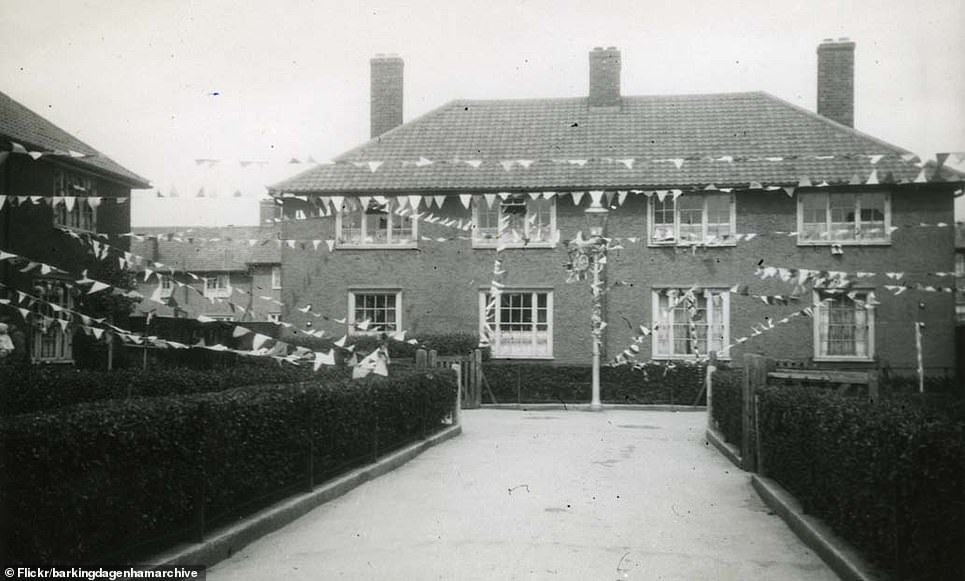 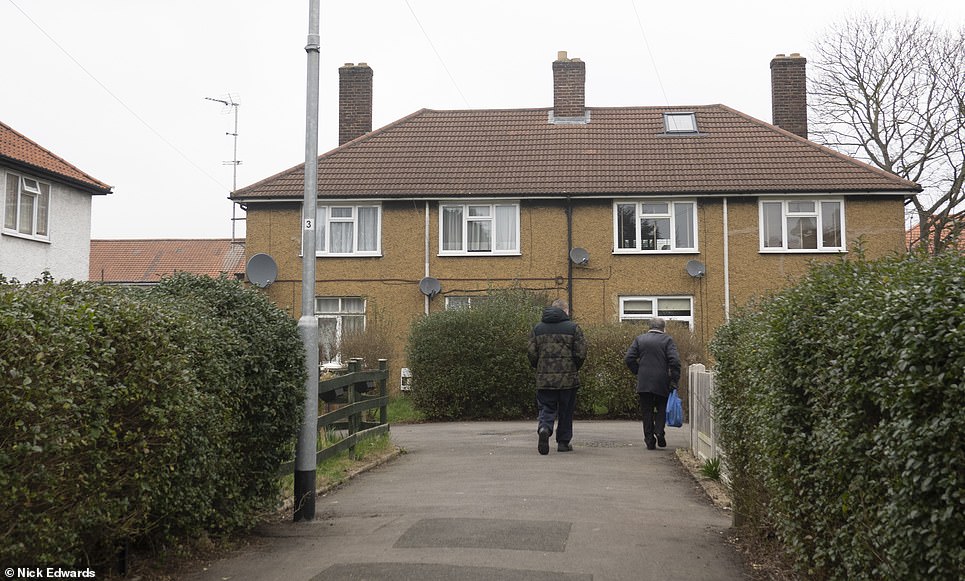 Part of the estate pictured left then and right today. The estate was seen as something of a modern Utopia when it was created, with each house having an inside toilet, a good bathroom and gardens front and back

The Becontree Forever project is now seeking to ‘celebrate the radical past of the estate and reimagine its future’.

Residents will be involved in the creation of three new public squares which will be created at the end of terraces as places for people to meet and play.

Among the events to mark its centenary, Irish artist Eva Rothschild will build a playground in Parsloes Park called the Becontree Pyramids, in the style of Minecraft and Lego.

The playground will open in July with a dance performance by teenage Becontree Estate residents working with Studio Wayne McGregor.

An out-of-use play area in the same park will be transformed into a second playground by British-Nigerian designer Yinka Ilori. 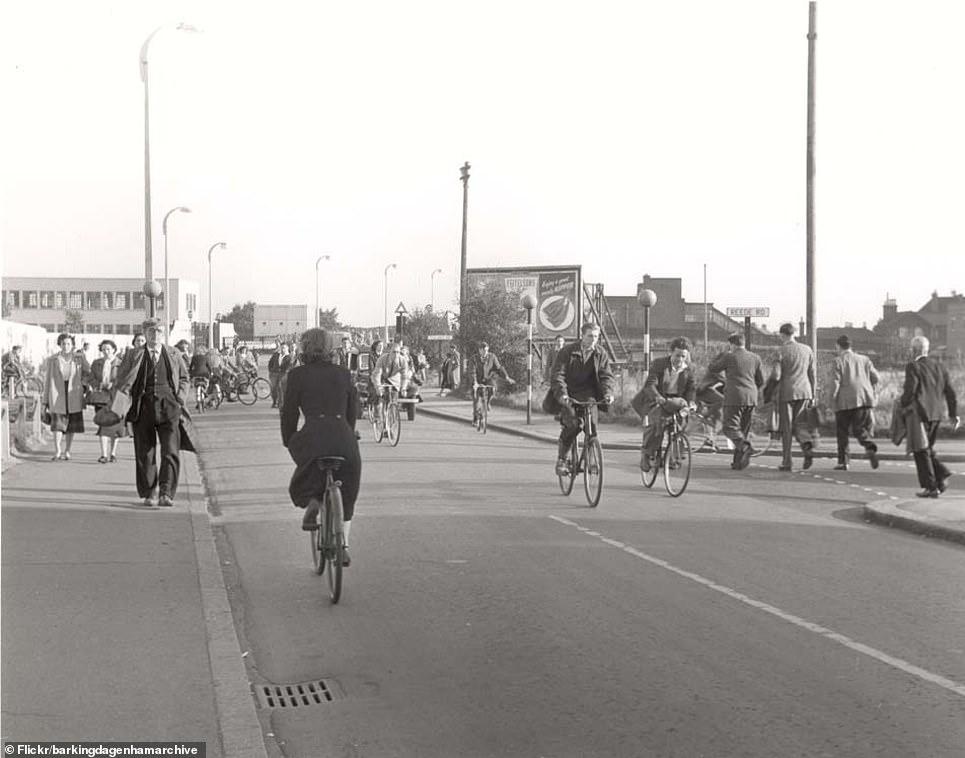 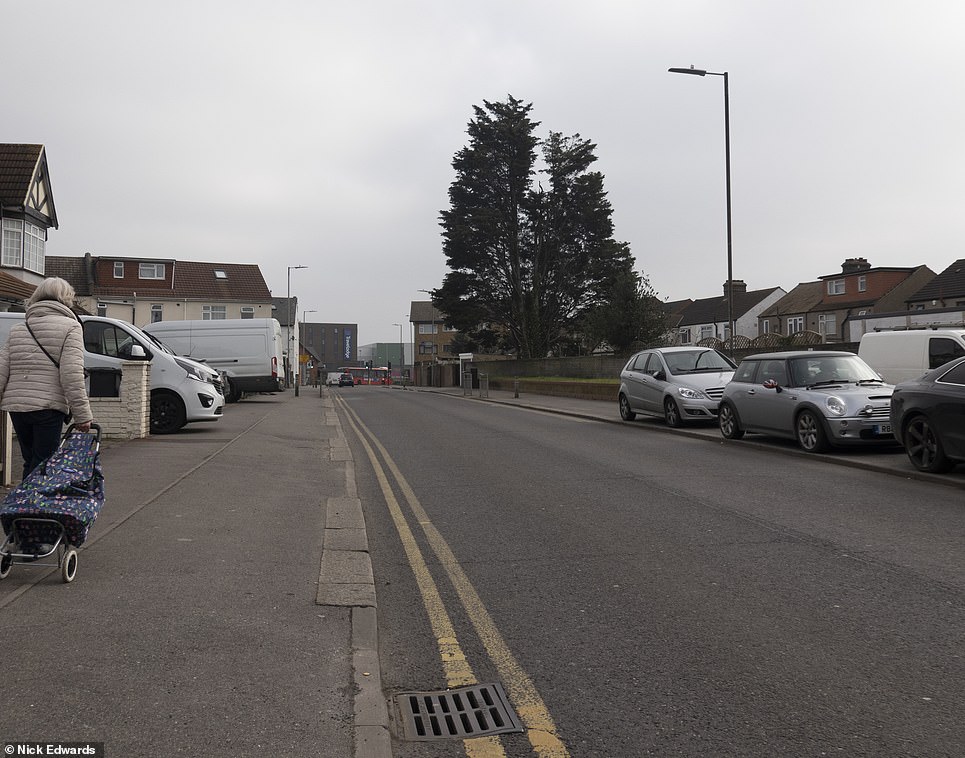 Reede Road on the Becontree estate in an undated photo. Pictured right is the same street filled with cars and devoid of people amid the pandemic 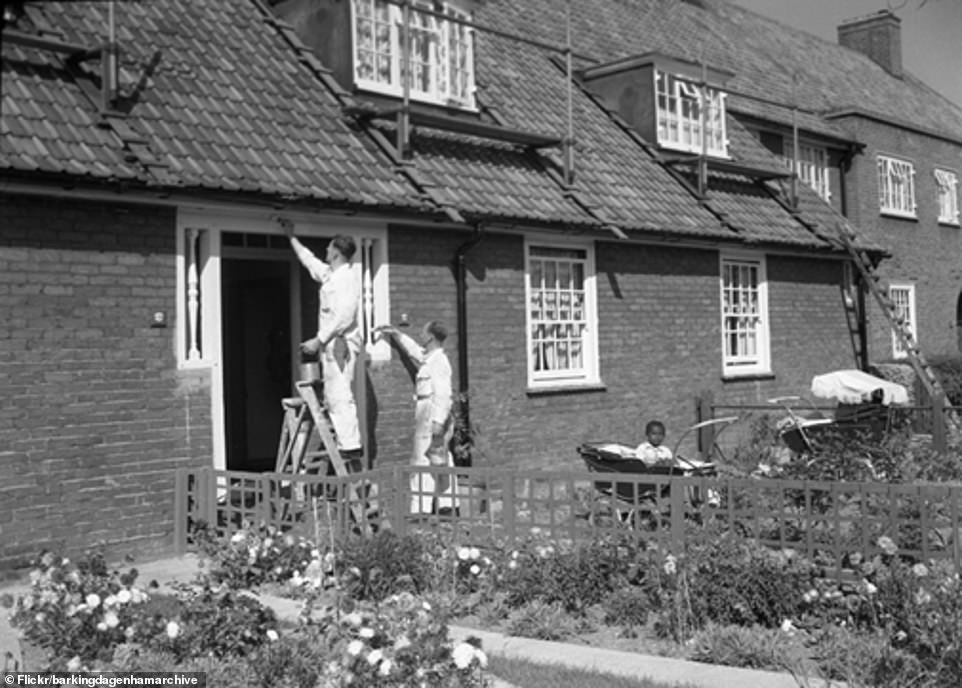 A house on the estate being refurbished. The estate was the largest in the world when it was constructed in 1912 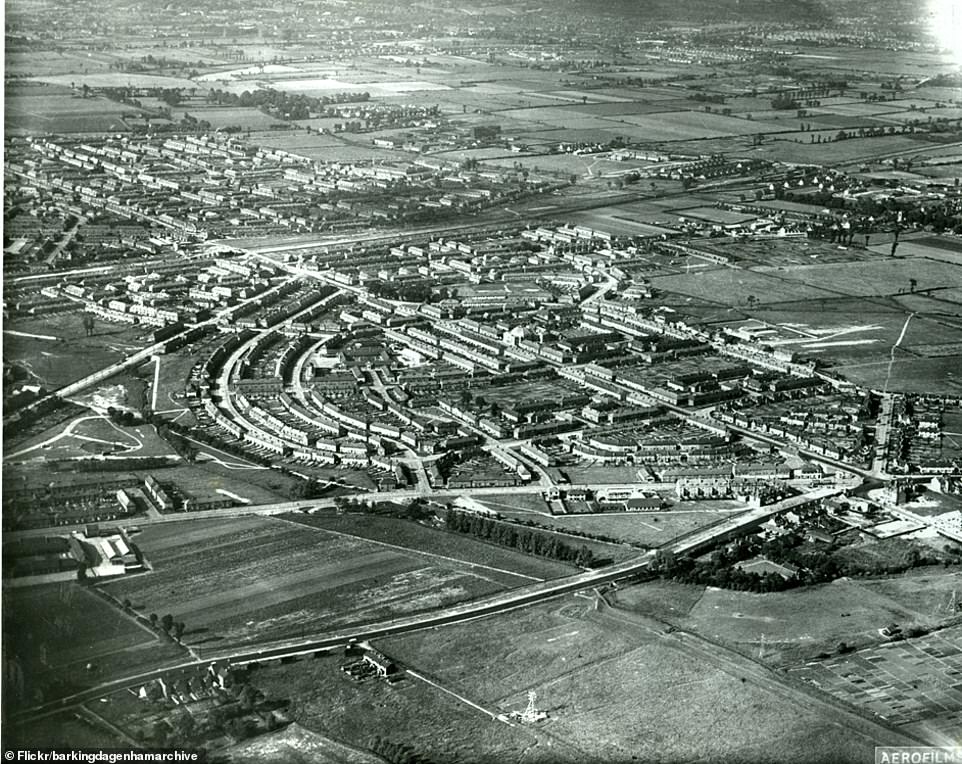 Aerial view showing the construction of the Becontree Estate. The estate was seen as something of a modern Utopia when it was created, with each house having an inside toilet, a good bathroom and gardens front and back 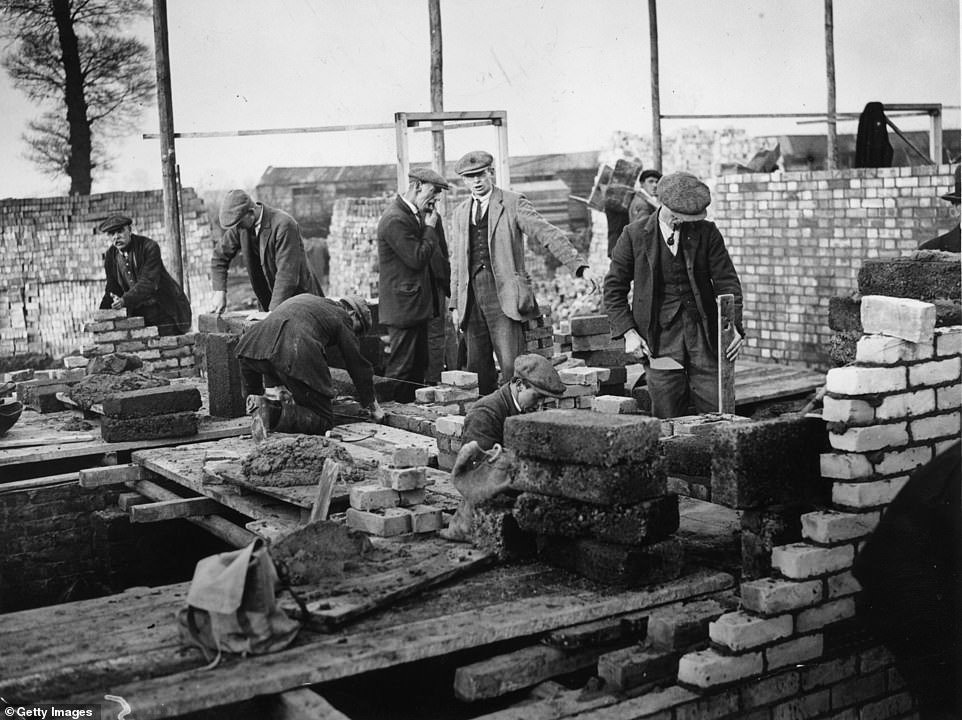 Construction on the estate in 1924. Residents were drawn by the allure of a spacious home with running water, two to four bedrooms and a parlour 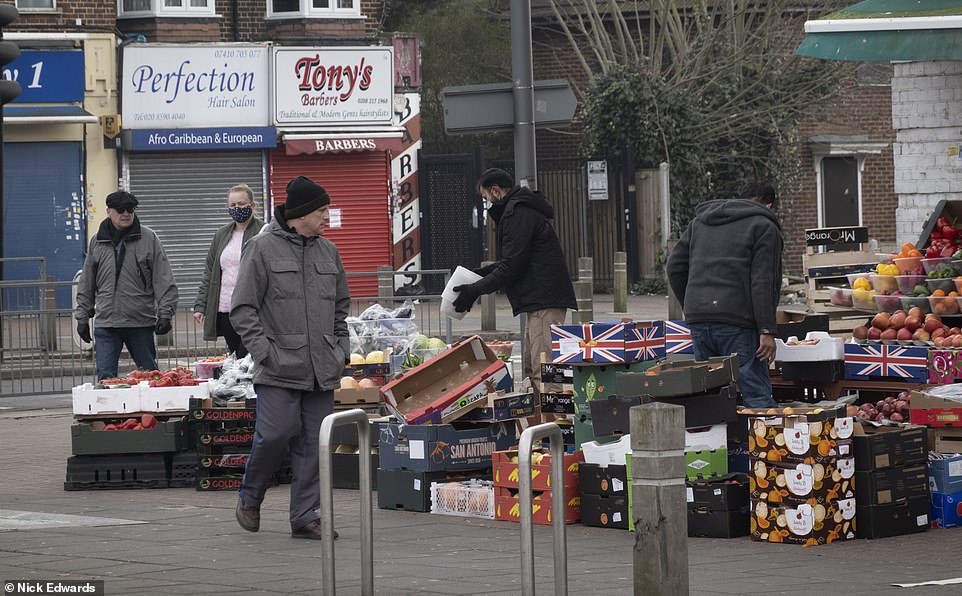 Pictured is the main shopping square on the estate today, masks in view on the almost empty street amid the coronavirus pandemic 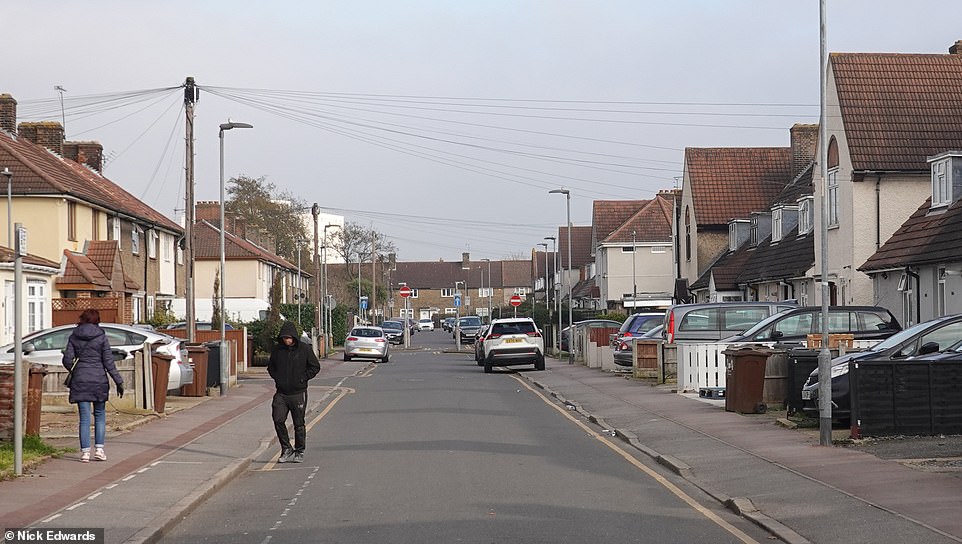 The design will be inspired by the park’s original pink flamingos and he will also produce totems, slides, birdwatching and nesting structures and a basketball court.

Finally, Studio Morison will make street furniture from upcycled rubble from the estate.

The commissions are all produced and curated by Create London, which led the east London cultural programme for the 2012 Olympics.

It is supported by the London borough of Barking and Dagenham using a levy paid by developers to mitigate the impact of their developments on the community, and the National Lottery Heritage Fund.

Habda Rashid, a senior curator from Create London, said said. ‘It’s really important that we shift that lens, so that we are not just telling the same stories, we incorporate the histories of other people.’