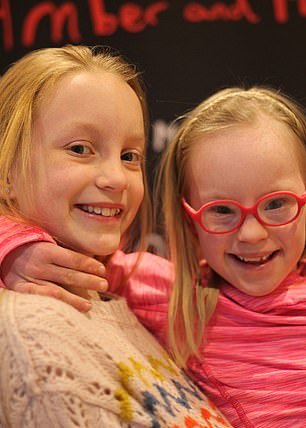 During lockdown, Amber has continued going into school because she is more vulnerable, while Olivia has been learning at home. They are pictured together above aged 10

In the opening scene of Ian Davies’s lovingly made documentary Amber And Me, the viewer meets his twin daughters for the first time as they get ready for their first day at school.

Born two minutes apart one December day 11 years ago, the blonde siblings have always been close, and as Amber struggles to pull her top over her head, Olivia is on hand to help undo the buttons.

Amber’s head pops out moments later, and it’s at this point that the viewer can see she has Down’s syndrome.

For many families, that diagnosis, often delivered in the clinical setting of a hospital, can feel bleak, mixing the usual dreams of parenthood with worries about an uncertain future.

Yet this film, one of the most touching portrayals of childhood that you’re ever likely to see, offers a different message as the twins – one with the condition, one without – make their way through primary school.

Week by week, Olivia comes to realise how different her sister is becoming. Yet despite the very real sadness and frustration, there is joy, too, and hope as the two girls learn not just to manage, but to prosper.

‘You can see Amber as Amber who has Down’s syndrome, or you can see her as Amber who is very compassionate, loving and positive and funny and who lives life in a full-hearted way,’ says Ian.

‘I don’t think I will ever meet anybody in my life who gets so much joy out of doing certain things as Amber. Just going out for lunch, she loves it and she gets really excited. And she gets so much pleasure from it. 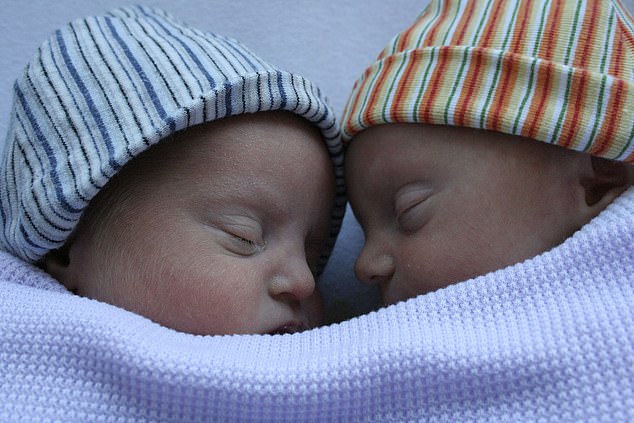 For many families, that diagnosis, often delivered in the clinical setting of a hospital, can feel bleak, mixing the usual dreams of parenthood with worries about an uncertain future. The twins are seen asleep at just three days old

‘Olivia says, ‘Sometimes I wish I was like Amber’ – because Amber is so open and confident in meeting people and talking to them.’

The film, seen entirely through the eyes of the children and without adult commentary, was initially intended as a short observational documentary about Amber’s move from the security of pre-school to a reception class near the family home in the Cotswolds. But it became a longer project when Amber started to have problems, saying she no longer wanted to go to school.

‘Olivia always felt that Amber was just like her,’ says Ian. ‘And in a way, the film is a coming-of-age thing for her in terms of her realising that Amber has Down’s syndrome and that it has implications for her development.

‘I remember when we first talked about it, Olivia asked when Amber was going to get better. And we said she’s going to have it for the rest of her life and obviously she was upset as she hasn’t really seen it as a disability. So some of the film is about Liv understanding what her sister’s diagnosis means.’

Her poignant moments of commentary are peppered throughout, and when Amber begins to struggle with school, it is clear how much this affects her twin.

‘She doesn’t want to go to school as much and it’s a bit sad because she isn’t enjoying it as much as everyone else,’ says Olivia. ‘I feel a bit like,

‘Why isn’t she enjoying it or why doesn’t she like it as much as she used to?’ I hope she stays at school with me.’ 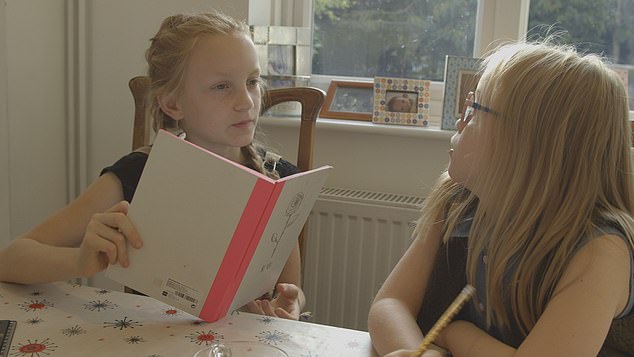 This film, one of the most touching portrayals of childhood that you’re ever likely to see, offers a different message as the twins – one with the condition, one without – make their way through primary school

Law graduate Ian, 50, lived and worked first in Hong Kong then Amsterdam, where he started to make documentaries and where he met his Dutch partner Marion, who works in publishing.

The couple moved to England in 2003 where son Finn – who makes a couple of cameo appearances in the film – came along in December 2007, followed two years later by the twins.

Neither Ian nor Marion had any idea that one of their babies had Down’s syndrome, news that was given to them hours after Marion’s caesarean section by a consultant who said he had to run some tests.

‘That was the first we knew about it,’ Ian recalls. ‘Then it was confirmed three days later. Of course, there were some tears because we didn’t know what it meant, but I think the really crucial thing is how the news is brought to you.

‘The consultant said Amber had Down’s syndrome but that although her development would be different from Olivia’s, lots of children and adults with Down’s syndrome have a very high quality of life.

‘So because we were given a very positive response that really helped us frame everything and we took it one day at a time.’

Both girls attended the same local pre-school before heading to reception, at which point Ian started filming – with the school’s permission – what he thought would be an uplifting 15-minute documentary charting his daughters’ entry into mainstream education. 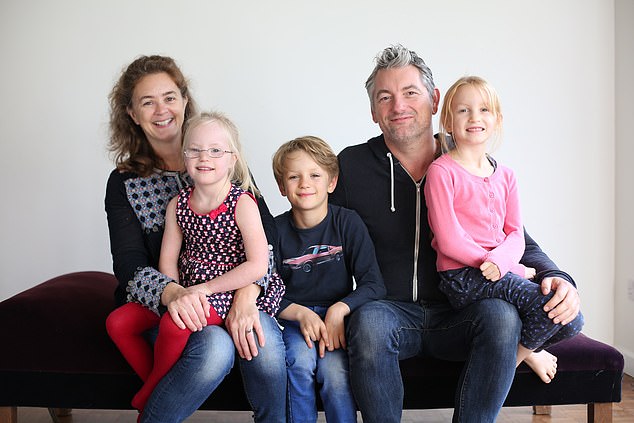 Neither Ian nor Marion had any idea that one of their babies had Down’s syndrome, news that was given to them hours after Marion’s caesarean section by a consultant who said he had to run some tests. ‘That was the first we knew about it,’ Ian recalls. Ian and Marion are pictured above in this family photo, while the girls are pictured above aged 7 alongside their brother Finn 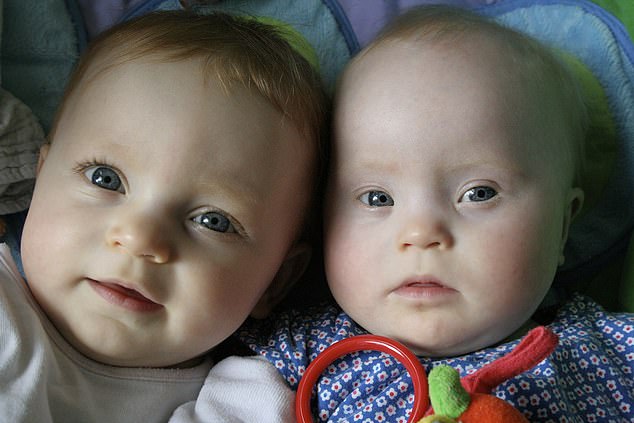 Born two minutes apart one December day 11 years ago, the blonde siblings have always been close. They are pictured above at seven months

Encouraged by a fellow parent to continue the filming beyond the reception year, he had not anticipated that his camera would end up following what, over time, would be Amber’s increasing unhappiness.

While there were some struggles in Year One as the more free-form play of reception class was replaced by active learning, it was in Year 3, when a favourite teaching assistant moved classes and Amber started to be slightly bullied by some other children, that she began to express real unhappiness.

‘She started saying, ‘I don’t want to go to school,” says Ian.

In one heartbreaking moment during the film, Amber, in pyjamas and with tousled hair, looks directly at her father behind the camera and repeats a single word: ‘Sad.’

Any parent knows the anguish that this kind of situation inflicts, and in that sense, says Ian, their worries for Amber were no different from that of any parent faced with an unhappy child.

‘The question for Amber was at that stage is this the right school for her? Is it the right environment?’ Ian recalls.

‘It’s not easy and you do go through all the normal processes of trying to be positive, to talk to school, try to work out which children are perhaps not being very nice to her.’ 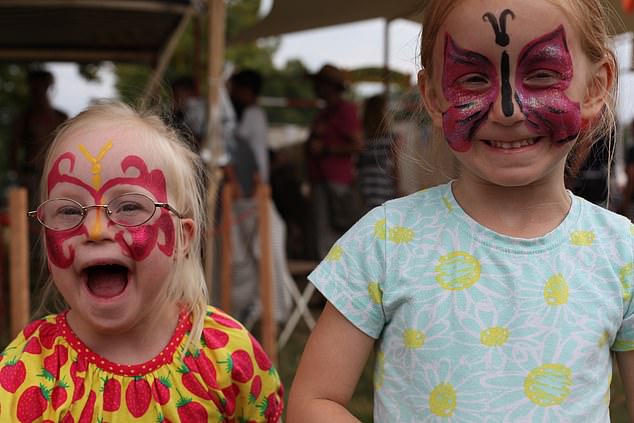 Both girls are now in their final year at primary school and set to attend the same mainstream secondary from September. ‘It’s a decision that we mulled over,’ says Ian. The girls are pictured above aged five

Olivia has her own worries as she starts to realise the impact of Amber’s differences. ‘Some people are being mean to her and teasing her, trying to make her say things she doesn’t understand,’ Olivia says in the film.

As Olivia matures, so does her understanding of her sister and how she feels about school.

‘At school she plays quite a lot by herself,’ she explains early on in the film. ‘Other people go up to her say ‘Hey, do you want to play?’ and she says, ‘No thanks, I’m OK.’ She doesn’t seem to mind whatsoever.’

Later on, Olivia reflects on this, saying: ‘I used to think that when she was at school she liked playing by herself. Now I’m not so sure.’

Unbidden, Olivia turns into teacher to her sister. ‘Without us saying anything Olivia started working with Amber at home,’ says Ian.

‘She would sit down and do maths and phonics with Amber because she wanted her to enjoy school, which was a really beautiful thing to do.’

But elsewhere, Olivia can be overheard in tears, saying she feels she has let her sibling down, while Ian gently tells her she is not responsible for her twin.

‘That was absolutely something we had to work on,’ Ian reflects. ‘She had to learn to let go so Amber could learn to grow herself.’

Ian allows the scenes to speak for themselves, such as the footage in which we see Olivia playing maid to Amber’s delighted Queen, or the girls snuggled alongside each other in their pushed-together beds.

Ian finished filming in 2019 when the girls were in Year 4, by which point Amber had settled down again – with the help of her favourite teaching assistant and her own set of friends.

During lockdown, Amber has continued going into school because she is more vulnerable, while Olivia has been learning at home.

‘The girls have quite independent lives at school now,’ says Ian. ‘There were some days before lockdown when we might ask Olivia how Amber got on, and she would say she hadn’t seen her all day.’

Both girls are now in their final year at primary school and set to attend the same mainstream secondary from September. ‘It’s a decision that we mulled over,’ says Ian.

‘Like all these things, it’s quite complicated, but we thought on balance that this was the best solution for her. Amber has been super-excited and has been talking for months about going to secondary. She can’t wait to go on the bus every day. She’s very much up for it.’

He points out that some of the qualities deemed a hindrance by society can actually exempt Amber from the challenges of her peers. 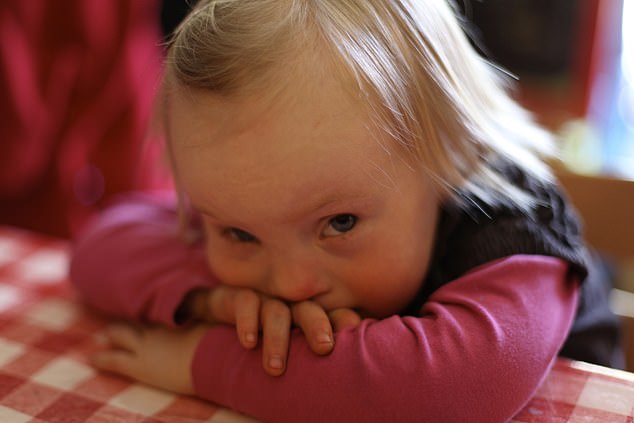 ‘She started saying, ‘I don’t want to go to school,” says Ian. In one heartbreaking moment during the film, Amber, in pyjamas and with tousled hair, looks directly at her father behind the camera and repeats a single word: ‘Sad’

‘In the cold light of day I don’t think Amber’s going to have any more problems at secondary school than any other child,’ he says.

‘She will not be upset if she doesn’t have a hundred friends on Facebook. She will not get addicted to gaming – there’s an awful lot of things which won’t affect her.’

And Amber’s mere presence often has a soothing effect on those around her. ‘I noticed that in the days when you could mix, if people came round to the house and were quite stressed with work or whatever, after 20 minutes in Amber’s company they were completely relaxed,’ Ian says.

‘I don’t want to be seen to be trying to paint too rosy a picture – like all children, Amber can have her moments when she doesn’t want to do things and gets frustrated and tired. But often she is the one who will pick up on other family members and come round to us and say, ‘Where’s that smile gone?’ ‘

Naturally, there are sibling squabbles too. ‘Of course, the girls have disagreements, they’re sisters, they share a room, so they fall out – it’s not like a fairy tale,’ says Ian.

‘But then there are these lovely moments when they are playing, or Liv comes home and talks about Amber reading in school and how amazingly she did. That’s lovely to hear.

‘But the best thing Olivia says about Amber is that she is just like any other sister. I love that.’

Amber And Me will be released online at amberandmefilm.com on March 21.