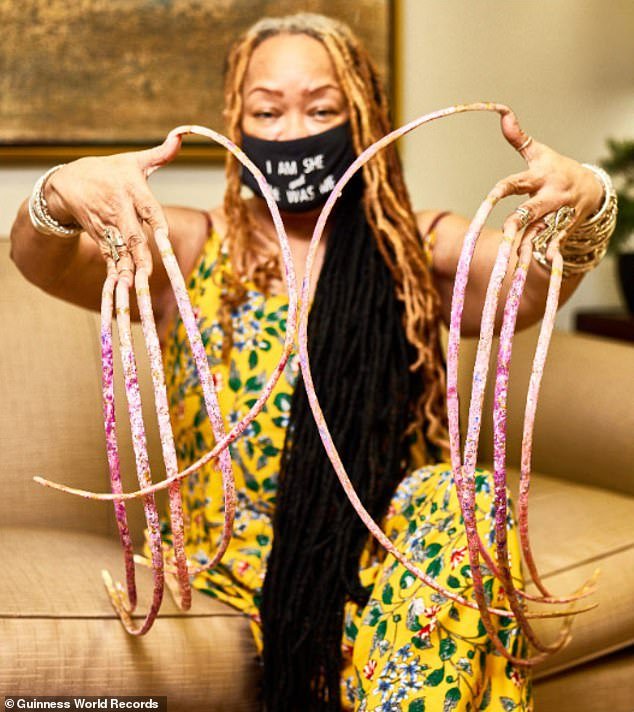 A woman who held the Guinness World Record for the world’s longest fingernails has cut them short after almost 30 years of growing.

Ayanna Williams from Houston, Texas, entered the Guinness World Records in 2017, for the ‘longest nails on a pair of hands’.

At the time, her nails measured a combined 18ft in length. Before the trim they were 24ft long, with the longest individual nail measuring 38in.

Ayanna, who needed to have professional cut the nails with an electronic rotary cutter due to the scale and thickness, admitted it was a ‘relief’ to have the nails gone.

It also means she will be able to do every day tasks like wash the dishes and change the bed for the first time in years.

Ayanna Williams from Houston, Texas, entered the Guinness World Records in 2017, for the ‘longest nails on a pair of hands’. She has just had them cut after growing them for 29 years 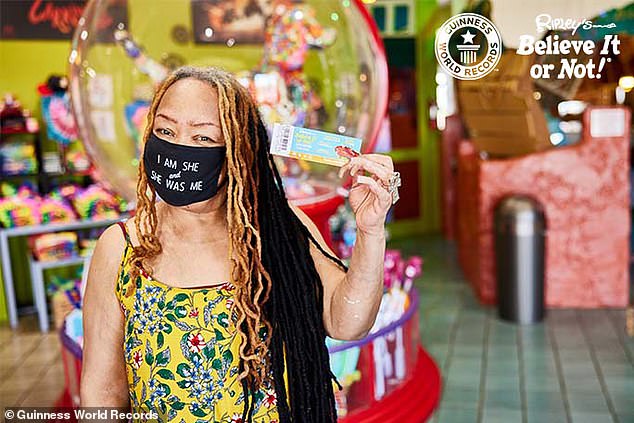 Ayanna, who needed to have professional cut the nails with an electronic rotary cutter due to the scale and thickness, admitted it was a ‘relief’ to have the nails gone

Speaking to Guinness World Records, Ayanna said: ‘The last time I measured my nails the longest one was 38 inches.

‘I get so many different kinds of reactions from growing my nails, it’s unbelievable. The majority are good, people are excited and they don’t know what to think or say actually because it’s something you don’t see on the norm.

‘I’m going to always be the queen with or without my nails because my nails don’t make me, I make my nails.’

Ayanna joked that her mother thought her nails were long when they were just 2in at the beginning of her attempt to grow them.

She admitted that she was worried about breaking a nail before having them cut and that she will miss having them – despite taking more than 20 hours and two bottles of nail polish to manicure. 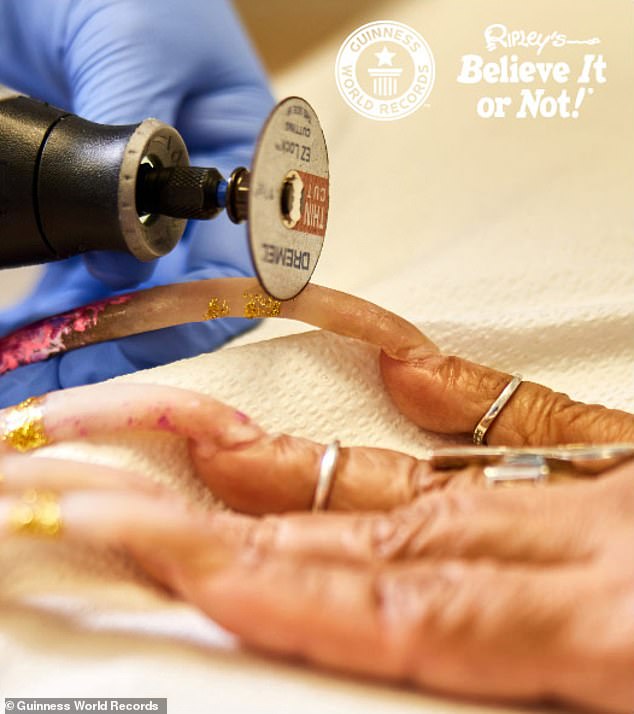 Ayanna said her mother thought her nails were long when she first started growing them, although they were just 2 inches. Pictured: Ayanna’s nails being cut

The nail artist said she would encourage others who wants to grow their nails because everybody should be allowed to be themselves.

‘If you want to grow your nails long, do it. Why not,’ Ayanna said.

‘It’s your life do it. The main thing is don’t worry about what people say because people are going to talk at the end of the day, if you’re doing good or doing bad.

‘If you want to grow your nails do it. I’ll encourage you, hit me up. You know where to find me.’

The nails will be put on display at Ripley’s Believe It or Not! Orlando.

Dermatologist  Dr Readinger, who cut the nails, admitted Ayanna’s nails were the first of their kind that she has had to work with and that it would stand out as an ‘interesting experience’ in her career. 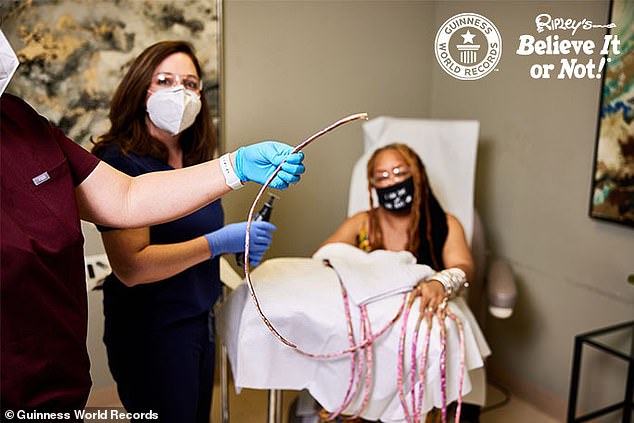 Ayanna (pictured right) had her nails cut by Dr. Readinger at Trinity Vista Dermatology, who had never worked with a similar condition before 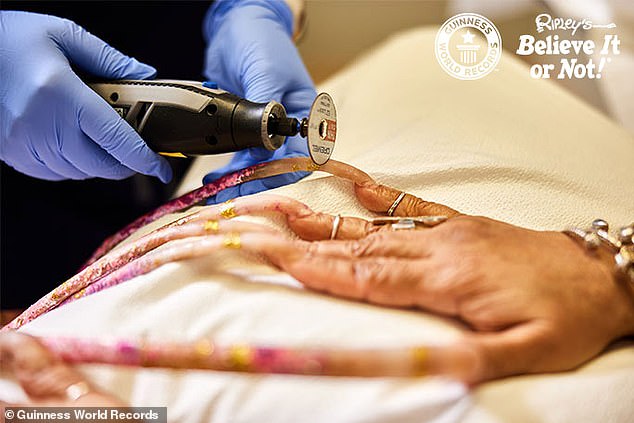 Dr. Readinger used an electronic device to trim each of Ayanna’s nails (pictured) 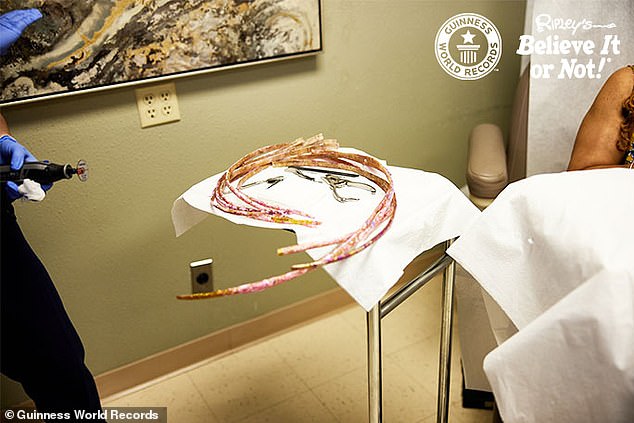 Ayanna gushed about her nails going on display as ‘history’ for her children. Pictured: Ayanna’s trimmed nails

She used an electronic device to trim each of Ayanna’s nails.

Ayanna said she felt ‘relieved’ to have her nails cut, saying: ‘My knuckles seem like they just loosened up.’

The great-grandmother added that she’s excited to see her nails on display and is happy for Guinness and Ripley to own them because it’s history for her children.

Ripley’s also displays Shridhar Chillal’s nails, who achieved the title of the longest fingernails on a single hand in 2018.

Shridhar Chillal from India, achieved the record for his nails measuring over 29 feet long.

Ayanna who had to be careful not to break her nails, was dubbed a world record breaker after Lee Redmond from Salt Lake City lost her title when her nails were ripped off in a car crash. 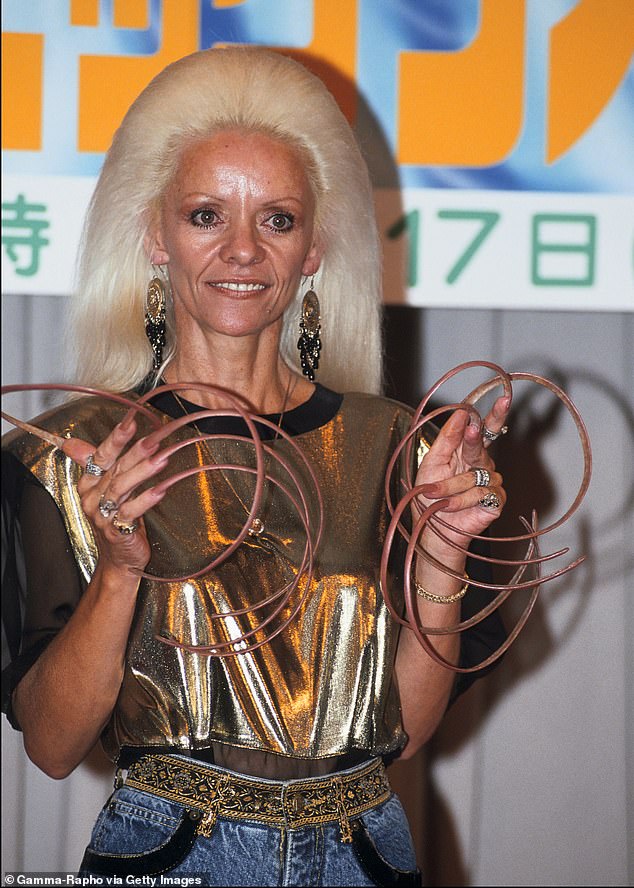 Ayanna was selected as a record holder for the world’s longest nails after Lee Redmond’s nails were ripped off in a car accident. Pictured: Lee in 1991

The 80-year-old who still has the world record for the longest nails ever, revealed she had to soak her nails daily in olive oil and clean them with a toothbrush.

‘Losing my fingernails has been the most dramatic thing that’s happened in my life. I think it was my grandson that said, ‘Grandma, they are like your baby; you’ve taken care of them for 30 years and lost them in a second,” she told Guinness, shortly after her crash.

‘The thing that bothered me with losing the fingernails was that they become your identity and I felt like I’d lost part of that, yet I would always say when people would make comments about my fingernails, ‘There’s more to me than my fingernails’.’