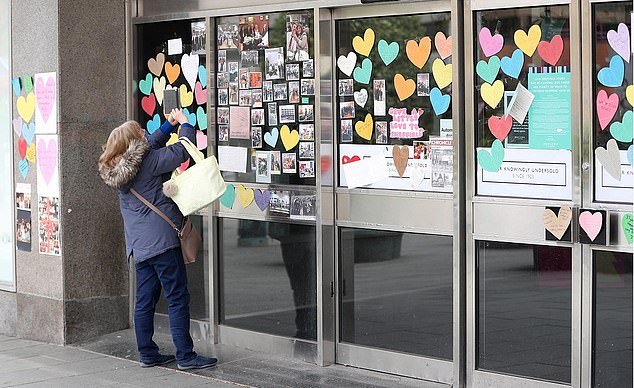 Give A Little Love was the slogan for John Lewis’s last Christmas campaign.

Now customers are using the same tactic in an emotional and even tearful plea to prevent the closure of a branch dating back more than 170 years.

The frontage of the John Lewis shop in Sheffield, South Yorkshire, has been plastered in hundreds of heart-shaped messages, love letters, notes, children’s drawings and photographs in what has been likened to an outpouring of grief.

Closing down:  The John Lewis shop in Sheffield, South Yorkshire, has been plastered in hundreds of heart-shaped messages, love letters, notes, children’s drawings and photographs

Customers and former staff have been among those contributing to the ever-growing display.

Employees have even gathered for vigils outside the 1960s building to share memories and their sense of loss.

Sheffield was one of eight John Lewis branches the company decided not to reopen post-lockdown last month.

It insists the department store was ‘financially challenged’ even before coronavirus and bosses are consulting on permanent closure.

Almost 25,000 people have signed a petition to save the shop, formerly Cole Brothers, which was established in 1847.

It employs 299 staff. Further petitions have been launched to save stores that closed this month in Aberdeen, Peterborough, Watford and York, attracting more than 50,000 signatures.

The Sheffield store has been described as the remaining ‘jewel in the crown’ of a city centre which has suffered challenging times for more than three decades after the opening of the out-of-town Meadowhall Shopping Centre.

Closure of John Lewis and the nearby Debenhams leaves independently owned Atkinsons as the sole department store.

For emotional grandmother Andrea Eades, 77, who was reading the tributes on John Lewis’s door, the shop is inextricably linked with her family’s history. She said: ‘I’m getting all teared up. It’s as if someone has died.

‘People in Sheffield are very attached to John Lewis and I absolutely love it. It’s a standing joke in my family and I’m very sad it’s closing down.

‘I’ve brought my grandson here to buy him toys and my daughter and I shopped here for my mother of the bride outfit when she got married.

‘My husband and I come regularly and go to the cafe. I have so many memories and the staff were so lovely, they’d do anything for you.’

Among tributes adorning the doors were photographs of staff having fun at work and even cards of condolence. 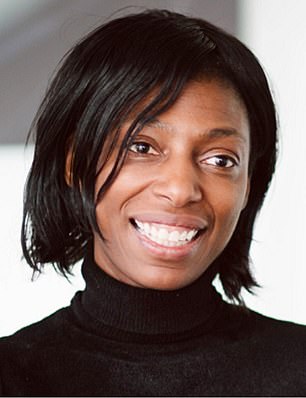 One, signed simply ‘Jan’, said: ‘I remember when my mum passed away I came here to buy candles and holders for her funeral. I was so upset and a lovely member of staff found a chair for me, sat me down and went off to find my candles.

‘She was so helpful and patient, she couldn’t do enough for me. I have never forgotten her kindness and compassion.

‘As she served me she was reduced to tears. Yes, I can order online but I will never get that level of service so doubt I will shop with you again.’

A tribute left by Gill Booth, read: ‘It’s hard to put into words what I am feeling. August 1982 was the first time I walked through the entrance at the start of my six-month scheme and became part of the Cole Brothers/John Lewis family.

‘After nearly 39 years’ service I am devastated that it’s the end of an era. Love to all my colleagues past and present and thank you to all the customers that have supported us.’

Another worker, Michelle Wales, said: ‘John Lewis in Sheffield has staff that have worked there literally a lifetime. Whether you were a part-timer or a full-time member of staff, everyone was made to feel as though they had joined a family.

‘The managers were hard-working, dedicated, diligent, effective and loyal.

‘This must be like a slap in the face to this amazing body of staff who dedicated their lives to growing the brand.’

An anonymous message read: ‘The very heart of Sheffield has been ripped out. Such lovely staff.’ Some were addressed directly to John Lewis Partnership boss Sharon White, declaring: ‘You have made a big mistake.’

For many years the store has been at the centre of plans to rejuvenate Sheffield’s city centre and the reaction to the closure shows how much emotional significance the store has.

‘It really is like the heart of the city centre is being ripped out.

‘I can remember shopping there in the 1980s for school uniform with my late mum. I think for many residents it’s another link to our shared history and memories that will be gone.’

Academic Philippa Thomson, 54, said: ‘The closure has really hit Sheffield hard. The regeneration of the city was depending on John Lewis to be at the heart.

The suggestion Sheffielders will travel to (the nearest branch at) Leeds feels like such a misjudgement of the people of Sheffield.’

As well as the main petition against the closure, a smaller petition has been created by shopper Evelyn Risner, urging a boycott of the chain and its sister firm Waitrose.

She believes the Sheffield store only became unprofitable because it had little investment in recent years. Meanwhile, millions are being spent on a revamp of the Peter Jones store in Sloane Square, London, including a rooftop terrace bar.

The small business owner said: ‘They just weren’t creative, they ran the place down. I bet they lost a lot of custom by leaving it so tired.

I just thought that (the petition) was a way of showing John Lewis that we were angry, I couldn’t think of any other way to show irritation. No one seems to have held them to account.’

He said he left the meeting none the wiser about the reasons for shutting the shop. Last year, the council bought John Lewis out of the lease for £3million, taking control of the building and the land it stands on.

The council then offered to pay a contribution towards refurbishment of the building. In return, John Lewis entered into a new 20-year deal paying rent based on turnover.

Speaking to local newspaper the Sheffield Star, Blomfield said: ‘They said it was profitable when the firm signed the new deal with the council last summer but they were unable to say what had changed since then.’

John Lewis said it is continuing to consult on the closure.

A spokeswoman said: ‘We are incredibly grateful for the support our shop has received – the strength of feeling underlines what a difficult decision the planned closure has been.’

Debenhams’ last stores will close on May 15 for good as it encouraged shoppers to take advantage of heavy discounts. The chain collapsed last year and had confirmed that 52 stores will shut on Saturday. The remaining 49 shut on May 12 and May 15.