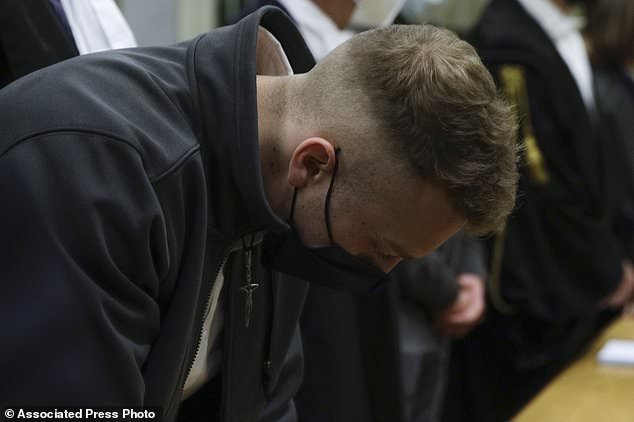 A jury in Rome on Wednesday convicted two American friends in the 2019 slaying of a police officer in a tragic unraveling of a small time drug deal gone bad, sentencing them to life in prison.

The jury deliberated more than 12 hours before delivering the verdicts against Finnegan Lee Elder, 21, and Gabriel Natale Hjorth, 20, handing them Italy’s stiffest sentence.

Elder and Natale-Hjorth were indicted on charges of homicide, attempted extortion, assault, resisting a public official and carrying an attack-style knife without just cause.

They were found guilty of all counts.

The slain officer’s widow, who held a photo of her dead husband while waiting for the verdict, sobbed and hugged his brother, Paolo.

The defendants were led immediately out of the courtroom after the verdicts were read.

As Elder was being walked out, his father Ethan Elder called out, ‘Finnegan, I love you.’

Prosecutors alleged that Elder stabbed Vice Bridgadier Mario Cerciello Rega 11 times with a knife that he brought with him on his trip to Europe from California and that Natale-Hjorth helped him hide the knife in their hotel room.

Finnegan Lee Elder listens to the verdict in the trial for the slaying of an Italian plainclothes police officer on a street near the hotel where he and his co-defendant Gabriel Natale-Hjorth were staying while on vacation in Rome in summer 2019, in Rome on Wednesday 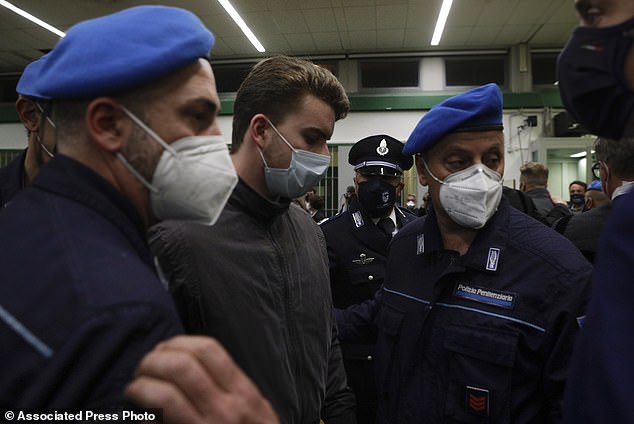 The other American on trial, Gabriel Natale-Hjorth, is escorted by police officers during the trial for the slaying of an Italian plainclothes police officer in summer 2019, in Rome, on Wednesday 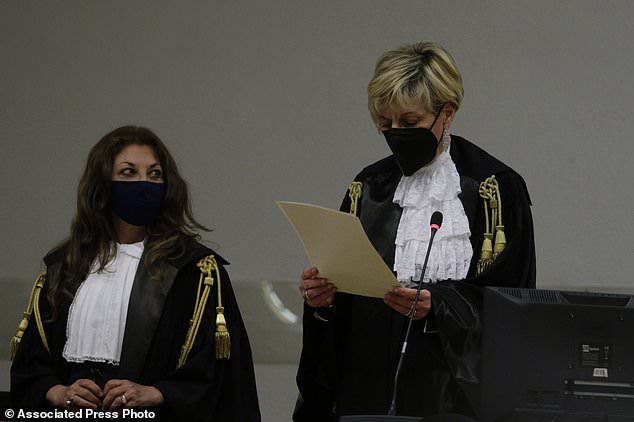 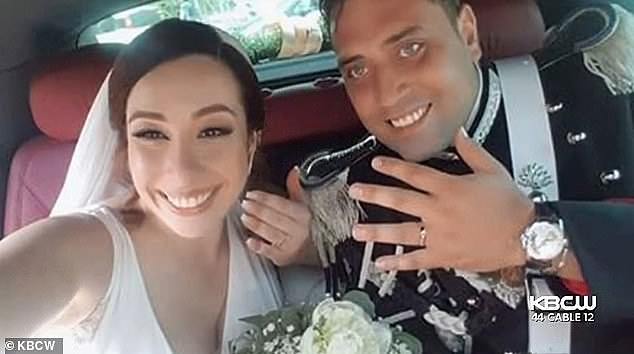 The pair, both from California, are accused of stabbing Cerciello to death in a botched drug deal while he and another officer were in plain clothes

The July 26, 2019, killing of the officer from the storied Carabinieri paramilitary police corps shocked Italy.

Cerciello Rega, 35, was mourned as a national hero. His widow, brother and partner were in the courtroom as the jury went into deliberations.

The two Californians were allowed out of steel-barred defendant cages inside the courtroom to sit with their lawyers before the case went to the jury, which consisted of presiding judge Finiti, a second judge and six civilian jurors.

‘I’m stressed,’ Elder said to one of his lawyers. 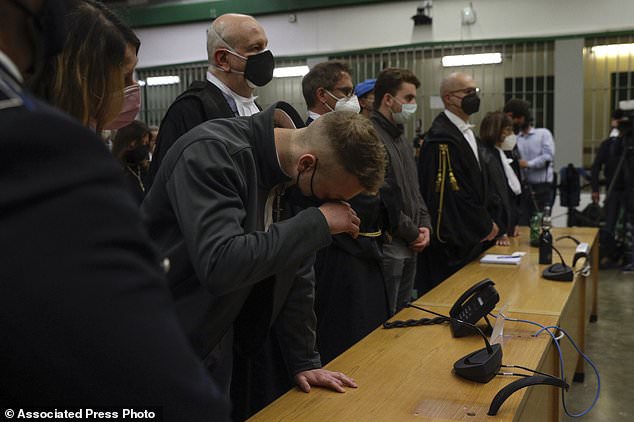 Finnegan Lee Elder listens as the verdict is read, in the trial for the slaying of an Italian plainclothes police officer in summer 2019 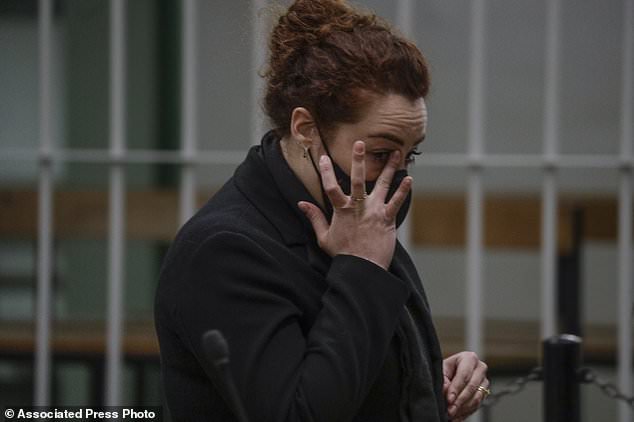 Rosa Maria Esilio (right), widow of Italian Carabinieri paramilitary police officer Mario Cerciello Rega, waits for the verdict to be read in the trial in which two American tourists are accused of murdering her husband

Just before the brief court appearance, Elder took a crucifix he wears on a chain around his neck and kissed it.

He also turned to his codefendant, Natale-Hjorth, and held out the crucifix toward him through a glass partition, motioning heavenward.

Elder was joined in the courtroom by his parents. He and his father crossed their fingers toward each other for good luck after the jury went to deliberate.

Natale-Hjorth was greeted by his Italian uncle, who lives in Italy.

Cerciello Rega had recently returned from a honeymoon when he was assigned along with a plainclothes police partner, officer Andrea Varriale, to follow up on a reported extortion attempt.

Prosecutors contend the young Americans concocted a plot involving a stolen bag and cellphone after their failed attempt to buy cocaine with 80 euros ($96) in Rome’s Trastevere nightlife district.

Natale-Hjorth and Elder testified they had paid for the cocaine but didn´t receive it.

Both defendants contended they acted in self-defense.

During the trial, which began on February 26, 2020, the Americans told the court they thought that Cerciello Rega and Varriale were thugs or mobsters out to assault them on a dark, deserted street.

The officers wore casual summer clothes and not uniforms, and the defendants insisted the officers never showed police badges.

Under Italian law, an accomplice in an alleged murder can also be charged with murder even without materially doing the slaying. 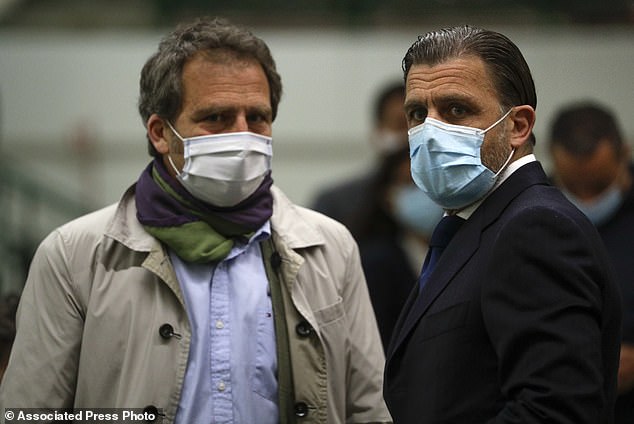 Fabrizio Natale (right), the father of Gabriel Natale-Hjorth, and uncle Claudio Natale wait for the verdict to be read in the trial for the slaying of an Italian plainclothes police officer on a street near the hotel where Finnegan Lee Elder and his co-defendant Gabriel Natale-Hjort were staying while on vacation in Rome in summer 2019

Varriale, who suffered a back injury in a scuffle with Natale-Hjorth while his partner was grappling with Elder, testified that the officers did identify themselves as Carabinieri.

At the time of the slaying, Elder was 19 and traveling through Europe without his family, while Natale-Hjorth, then 18, was spending the summer vacation with his Italian grandparents, who live near Rome.

Former schoolmates from the San Francisco Bay area, the two had met up in Rome for what was supposed to be couple of days of sightseeing and nights out.

Prosecutors alleged that Elder thrust a seven-inch military-style attack knife repeatedly into Cerciello Rega, who bled profusely, like a ‘fountain,’ Varriale had testified, and died shortly after in hospital.

Elder told the court that the heavy-set Cerciello Rega, scuffling with him, was on top of him on the ground, and he feared that he was being strangled.

Elder said he pulled out the knife and stabbed him to avoid being killed, and when the officer didn’t immediately let him go, he stabbed again.

After the stabbing, the Americans ran to their hotel room, where, according to Natale-Hjorth, Elder cleaned the knife and then asked him to hide it.

Natale-Hjorth testified that he hid the knife behind a ceiling panel in their room, where it was discovered hours later by police. 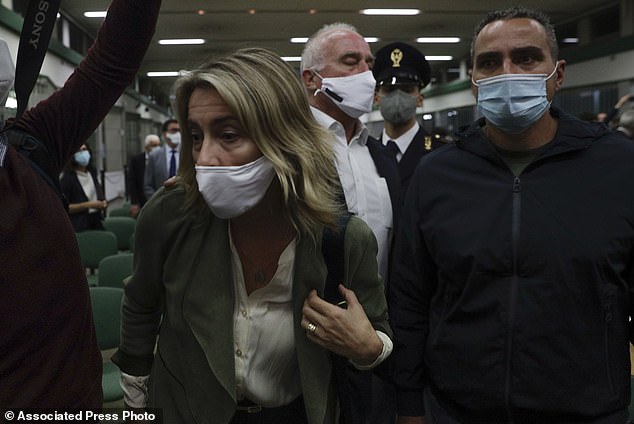 Ethan Elder (center) and his wife Leah Lynn Elder (left), the parents of Finnegan Lee Elder, react during the trial for the slaying of an Italian plainclothes police officer in Rome on Wednesday

The defendants had told the court that several hours before the stabbing, they attempted to buy cocaine in the Trastevere nightlife district of Rome.

With the intervention of a go-between, they paid a dealer, but instead of cocaine they received an aspirin-like tablet.

Before Natale-Hjorth could confront the dealer, a separate Carabinieri patrol in the neighborhood intervened, and all scattered.

The Americans snatched the go-between’s knapsack in reprisal, and used a cellphone that was inside to set up a meeting with the goal of exchanging the bag and the phone for the cash they had lost in the bad drug deal.

Meanwhile, Cerciello Rega, wearing a T-shirt and long shorts, and Varriale, in a polo shirt and jeans, headed out to follow up on what was described as a small-scale extortion attempt. 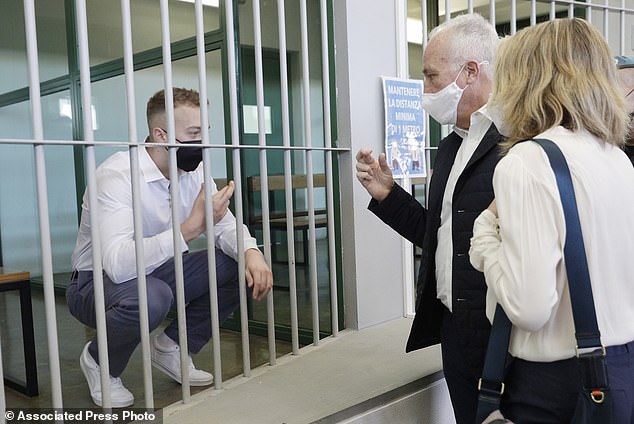 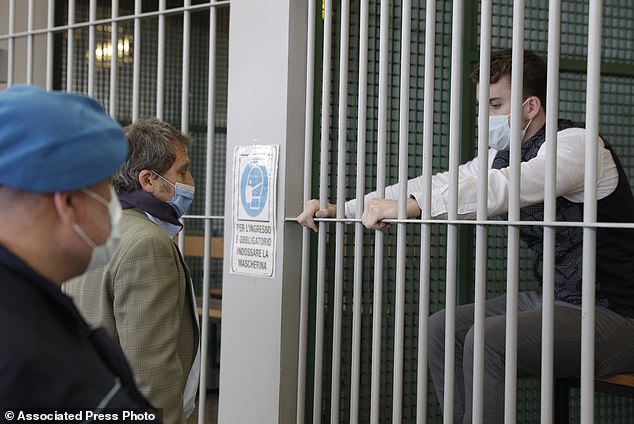 They didn’t carry their service pistols.

From practically its start, the trial largely boiled down to the word of Varriale against that of the young American visitors.

The victim’s widow, Rosa Maria Esilio, would sit in the front row, often clutching a photo of her husband.

Photos of the newlyweds, with Cerciello Rega in his dress uniform, after their wedding, were widely displayed in Italian media after the slaying.

As the trial neared its end, one of Elder´s defense lawyers, Renato Borzone, argued in court that deep-set psychiatric problems, including a constant fear of being attacked, figured in the fatal stabbing.

Borzone told the court his client saw a world filled with enemies due to psychiatric problems and that something ‘short-circuited’ when Elder was confronted by the officer.