Richmond’s hopes of an AFL premiership three-peat appear shot, but coach Damien Hardwick isn’t ready to put the cue in the rack just yet.

With superstar Dustin Martin (lacerated kidney) already sidelined for the rest of the season, a comprehensive 38-point defeat to Geelong on Sunday was the latest blow to the Tigers’ finals hopes.

They were due to fly to Perth on Sunday night to spend a week in quarantine at Joondalup Resort before a crunch clash with Fremantle at Optus Stadium in round 20.

Richmond’s hopes of an AFL premiership three-peat appear shot, but coach Damien Hardwick (pictured on July 25) isn’t ready to put the cue in the rack just yet

Dion Prestia (hamstring) is a likely inclusion against the Dockers and Nathan Broad (ankle) is an outside chance to return.

Hardwick said he will not look to rest senior players or experiment any further with his team, instead keeping the foot on the accelerator while finals remain a possibility.

‘We push on and hang in there, that’s what our club does. We’re not putting the flag up by any stretch of the imagination,’ Hardwick said.

‘We’re still a mathematical chance to make finals and we’ll get Dion back, Broady back at some stage, Nick Vlastuin possibly the week after.

‘We give ourselves a chance to get some troops back on the park and give it a crack. We’ll keep trying as best we can.’ 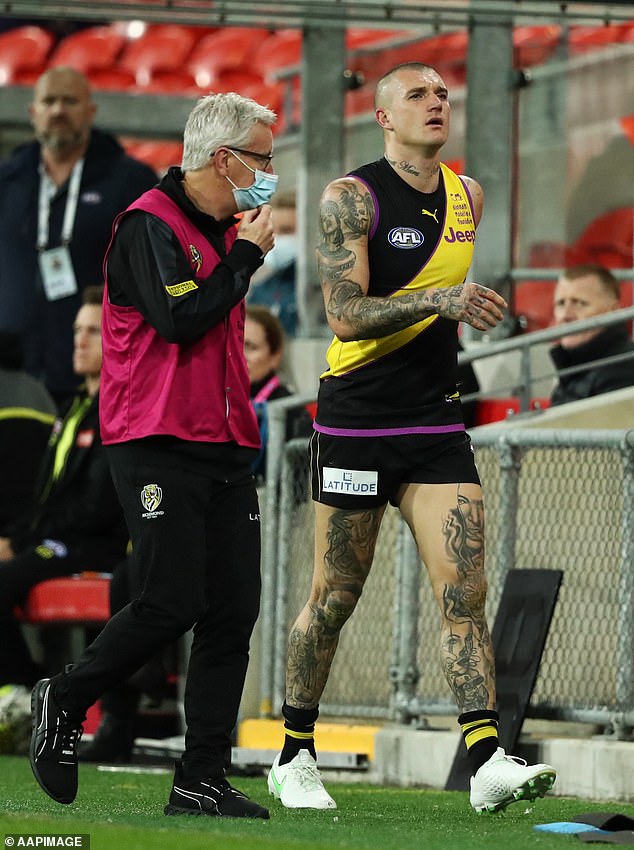 With superstar Dustin Martin (pictured on July 17) already sidelined for the rest of the season with a lacerated kidney, a comprehensive 38-point defeat to Geelong on Sunday was the latest blow to the Tigers’ finals hopes

Richmond have consistently overcome challenges in a golden era that has reaped three flags in four seasons.

They have winnable games against Fremantle, North Melbourne, GWS and Hawthorn in the run home.

But to climb the mountain again from here, with so many premiership stars missing big chunks of football and the losses piling up, would take something special.

‘It’s quite easy to give up but the tough clubs will keep going and that’s what we’re trying to do,’ Hardwick said.

‘We’ll keep pushing for our fans, our players, our families and our organisation as hard as we can until that flame’s extinguished.

‘It’s an enormous challenge but there’s no doubt we’re up for it.

‘We’ve been in challenging situations before and this is another one of those. It’s a measure of us, so we’ll see how we go.’

Richmond will also hope to regain wingman Kamdyn McIntosh from a hamstring injury before the end of the home-and-away season.