By Danyal Hussain For Mailonline

Shocking footage shows the moment a violent brawl broke out inside a chicken shop after one customer stepped on the foot of another.

Two groups of men threw punches at each other as they fought inside Chicken Time in Reigate, Surrey, with the violent scenes captured by a shocked customer outside the restaurant.

The person filming claimed the brawl was sparked after a man in a white T-shirt stepped on another’s shoe while they were queuing up to order.

The man whose shoe was stepped on then threw a punch before the two started brawling.

No staff are seen in the clip and it is unclear when the brawl took place.

However, it appears to have been filmed at night and near closing time, with the restaurant’s chairs and tables packed away.

Other customers fled the store in panic as the fight kicked off, scrambling out of the way of the two men.

Friends of the two men then piled into the fight, turning the small waiting area of the store into a warzone.

One man is filmed hunched over with his hands on his head as another repeatedly punches him in the head in shocking scenes.

He ends up on the floor on top of another man before scrambling back up to rejoin the fight.

Two groups of men violently brawled with each other in a chicken shop in Reigate, Surrey 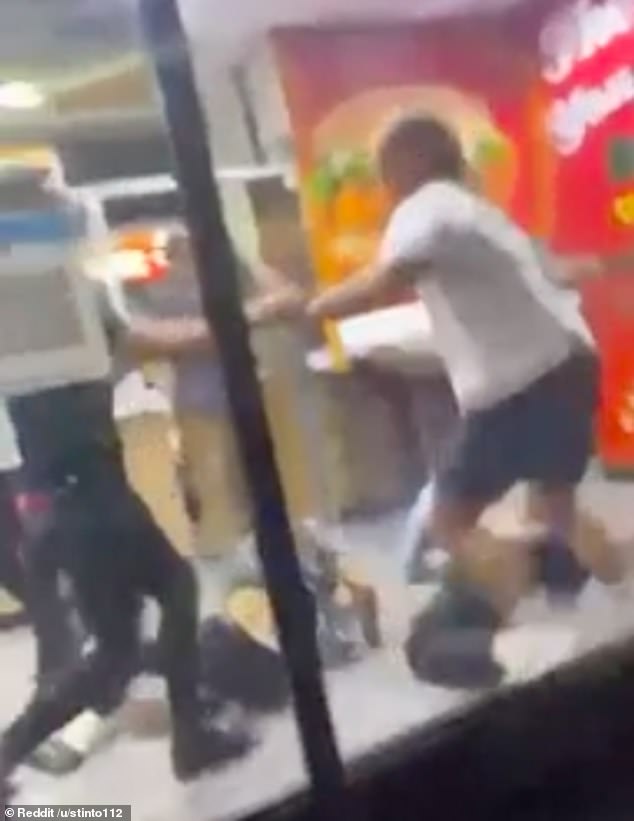 Vicious punches are thrown throughout the clip with one of the brawlers losing their shirt in the melee.

More punches are thrown as the fighters knock over some chairs before ending in a pile against a wall.

The clip ends with the fighters battling across the store before the man in the white shirt – who is thought to have sparked the melee –  pushed out of the restaurant by a friend.

He is dragged away as the other group throw more punches in his direction.