The Matildas have held gold medal favourites USA to a nil-all draw to book a likely quarter-final berth at the Tokyo Olympics.

The United States are automatically through to the next round after finishing second in group G, ahead of Australia on goal difference.

The Matildas will likely to advance as the third-place finisher in the group, but will have to wait until late Tuesday night for their quarter-final berth to be confirmed.

Only a catastrophic series of results in the remaining group games will see the Matildas knocked out of the tournament.

The only way Australia could miss out is if hosts Japan beat Chile and China wins comfortably against Netherlands.

‘We obviously came here to win but at the end of the day, a point is a point and they are a really good team, as we know,’ Matildas’ captain Sam Kerr told Channel Seven afterwards.

‘We will take the point and we move on.’

USA looked out of sorts with the Matildas controlling possession for much of the game and matched it with the world champions from the opening whistle.

The US almost opened the scoring in the eighth minute when Alex Morgan almost went one on one with goalkeeper Teagan Micah, who backed off and made a comfortable save after Logarzo got back to pressure the US superstar.

Ten minutes later, the Matildas almost snatched the lead when Ellie Carpenter’s long throw caused chaos in the 18-yard box and Fowler looped a header off the crossbar.

USA thought they hit the front at the 30th minute courtesy of a Morgan header but it was disallowed by the VAR for being offside. 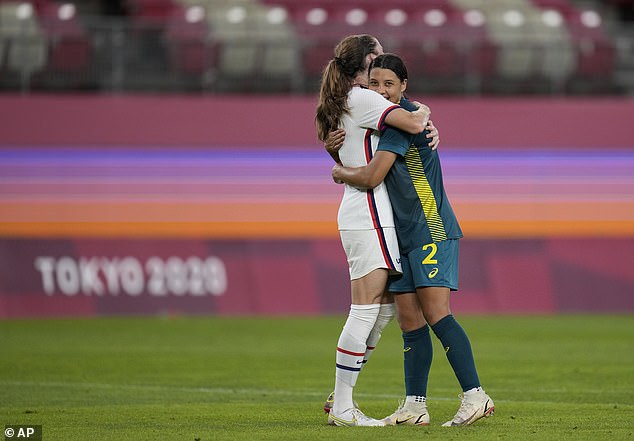 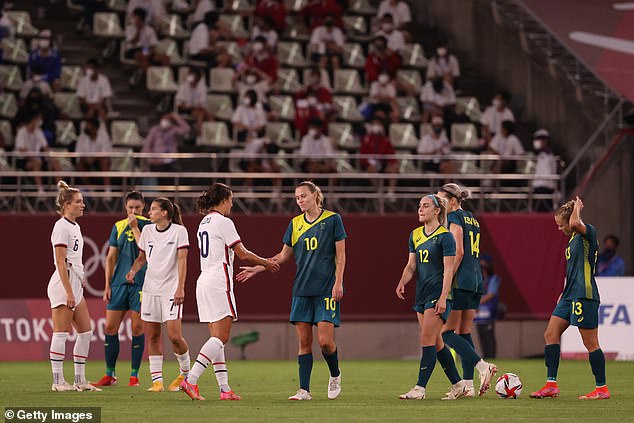 In the 43rd minute, Kerr worked a ball to Tameka Yallop, who hit her chance from a tight angle straight at US goalkeeper Alyssa Naeher.

Two minutes later, US star Julie Ertz made a crucial tackle on Kerr close to goal to ensure a half-time stalemate.

Nine minutes into the second half, Kyah Simon slipped through Fowler, who had one shot blocked then put another off target.

‘I thought we dominated for most of the game but at the end of the day, you don’t win a medal by tying with the USA so hopefully we can go through and continue to play like that and we might go a long way.’

The Matildas will play the winner of group E – either Great Britain or Canada if theyet progress through. 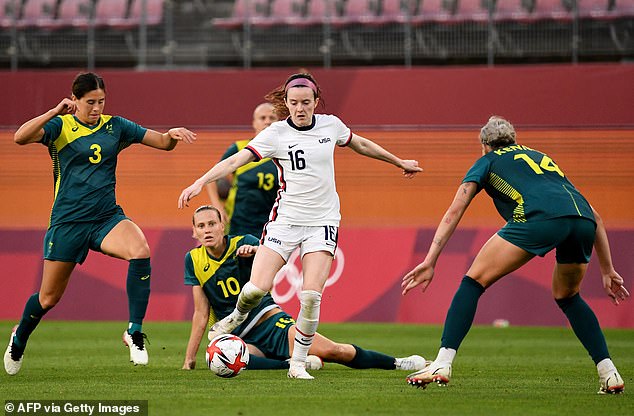