Surprising honest confession from Ariarne Titmus about her U.S. rival Katie Ledeky as she reveals she’s ‘absolutely buggered’ after winning two golds and admits: ‘It’s nice to be on my own a little bit’

Titmus, who has become the star of the country’s Tokyo Games, admitted she’s feeling the emotional and physical strain of her first games and carrying the hopes of a nation.

‘It’s a big day today. I had one and a half hours in my room today. I’m absolutely buggered,’ Titmus told Channel 7.

‘Honestly I’m exhausted. I keep thinking back to Beijing, it was the same as this morning’s heats. Phelps won eight golds. I have done two and I’m wrecked.

‘It puts into perspective for me how amazing he was. I’m going to rest up as much as I can and get ready for my last race at the Olympics.’ 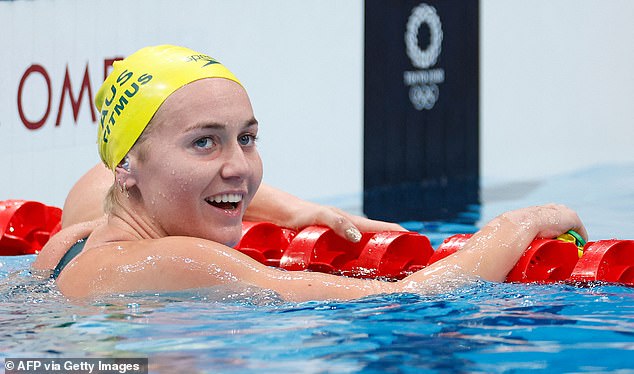 ‘It’s a big day today. I had one and a half hours in my room today. I’m absolutely buggered,’ Titmus told Channel 7

The 20-year-old Tasmanian, who won gold in the women’s 200m and 400m freestyle over American superstar Katie Ledecky, paid tribute to her arch-rival for keeping her going.

‘I love racing Katie. It is nice to be on my own a little bit. It’s been really good this week. We’ve been getting along really well,’ Titmus said.

‘We’ve really enjoyed racing each other. I mean, we don’t get to do it often. It’s so fun for us to be able to race. So, I am looking forward to two days’ time.’

Titmus swum first in Australia’s 4x200m relay on Thursday who were red hot favourites for the event, instead coming in third in a lineup that confused legends Ian Thorpe and Giaan Rooney.

Just before the race, Aussie swimming Thorpe said he was confused with the team’s line-up as Titmus stepped up to the blocks.

‘I’m a little curious about the order they are swimming in,’ the nine-time Olympic medallist said.

Former Olympic gold medallist Giaan Rooney echoed his sentiment, saying it was a ‘big miss’ to have O’Callaghan out of the team.

‘I don’t know for sure but I think the idea was for both Titmus & McKeon to swim fast but ‘comfortably’ up front (they both have individual events left) & to have enough of a lead after Wilson for Neale to anchor – biggest miss was Mollie O – 1.55.10 in the heat,’ she tweeted following the race.

‘Would love to know the thought process behind it.’ 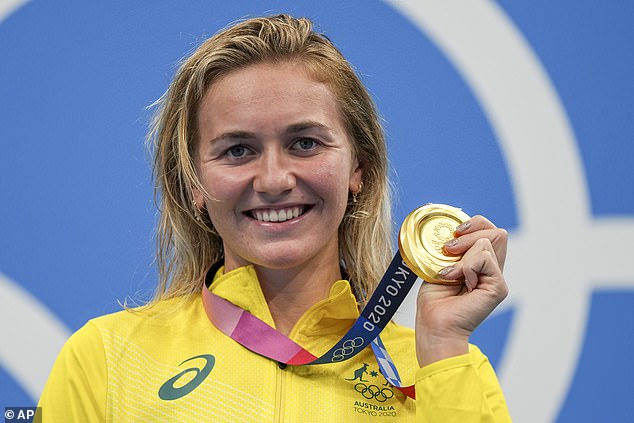 Golden girl: Titmus beams as she holds up the gold medal for the women’s 400m freestyle

Titmus admitted she has started to feel the weight of competing across four events, paying tribute to the Games’ most decorated Olympian Phelps for having the stamina to keep going.

She qualified sixth-fastest for the final of the 800m freestyle, which is her final event and final race against Ledecky.

‘This is probably my toughest backup and it’s not an easy 800 in the morning,’ Titmus said.

‘This is a really deep field. I knew I had to be tough and swim a solid swim to get through. I think should be fine with that time.’