By Mail on Sunday Reporter

More pet-owners are taking their cats on holiday after lockdown brought them closer together.

Animal-lovers have often taken their dogs on holiday, but now cats too – with 2.3 million of them being taken on UK ‘stay-cat-ions’ this summer, a survey says.

The trend is being driven by young adults, with 33 per cent of cat-owners aged 18 to 34 taking them on holiday, compared to just four per cent of owners over 55.

The poll of 2,000 pet-owners by Direct Line Motor Insurance suggests that 6.3 million dogs are going on stay-cations.

Animal-lovers have often taken their dogs on holiday, but now cats too – with 2.3 million of them being taken on UK ‘stay-cat-ions’ this summer, a survey says (stock image)

The research found that British breaks are booming, with 36.9 million trips taken last year, with over 13 million Brits (25 per cent) not currently finding overseas holidays an appealing prospect due to the pandemic.

Nearly 20 million people (37 per cent) say their holiday habits have changed this year, with pet ownership a key factor.

The survey shows that dogs are set to cover 1.4 billion road miles this summer as 12 million pet owners prepare to take their furry friend on holiday with them. 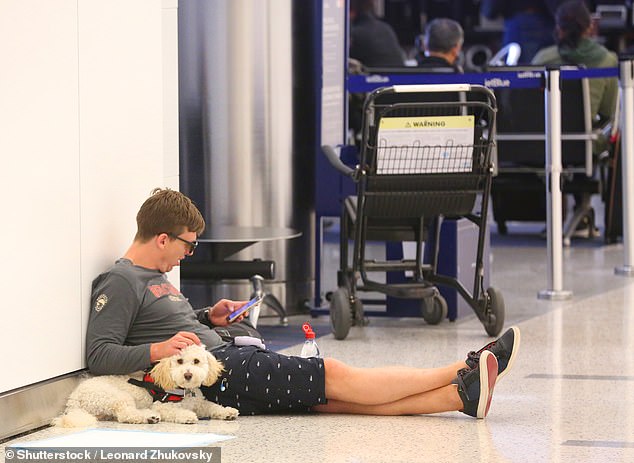 A study says a total of 6.3 million dogs and 2.3 million cats are set to be taken on summer staycations this year as their owners cannot bear to leave them behind (stock image)

But dogs are not alone – some 3.6 million owners plan to take their cats on road trips over the next few months, driving 98 miles each, meaning British cats too will travel a total of 349 million miles.

Lorraine Price, Head of Motor Insurance at Direct Line, which surveyed 2,000 pet owners said: ‘This summer is set to see another boom for staycations as we pack up our cars and hit the road for well deserved holidays.

‘We are certainly a nation of animal lovers, which is clear from the number of dog and cat owners who plan to pack their pets in the car when they set off this summer.

‘Driving with pets can be stressful, so it’s worth spending time planning how they’re going to be safely secured and that there are plenty of opportunities for stops along the way if going on a long journey.’