His father may have taken out a historic gold medal, but it was adorable toddler Noah Martin who stole the show during a post-win interview.

The 27-year-old dad wowed viewers with a stunning no-handed front flip in the first run earning him an winning score of 93.30, and making history as the first ever gold medalist as the sport made its debut.

The rider later told reporters that he hoped the achievement would put him on-side with the neighbours back home, who were not pleased he built a backyard skate-park to practice his sport.

Meanwhile, back home in the Gold Coast hinterland, his proud wife Kim spoke to Karl Stefanovic on the Today show on Monday about her husband’s riveting victory.

But the conversation was repeatedly interrupted by the Martins’ young son, Noah, as he demanded his mother’s attention.

‘He [Logan] is very excited, he’s enjoying every moment of it all,’ Kim says, before Noah injected by shouting ‘mum’, prompting her to pick him up.

‘I want to play with daddy,’ Noah replies.

Sitting on his mother’s hip, the two-year-old temporarily settled for a few minutes before starting to sook, prompting Kim to place him back on the ground.

But when he instantly began moaning again, Kim picked him up – with the toddler this time entertaining himself by driving toy cars across his mother’s chest.

‘Broom, broom,’ he mummers, rolling the truck into his mother’s chin as Stefanovic laughs.

‘You want some attention?’ Kim asks, prompting the shy toddler to turn his head over the back of her shoulder.

‘How’s the young fella going? He has plenty of energy,’ Stefanovic chuckles.

‘He does. He has been riding his bike around this morning,’ Kim responds, as Noah  nestles his head against his mother’s chest, remaining quiet for the rest of the chat. 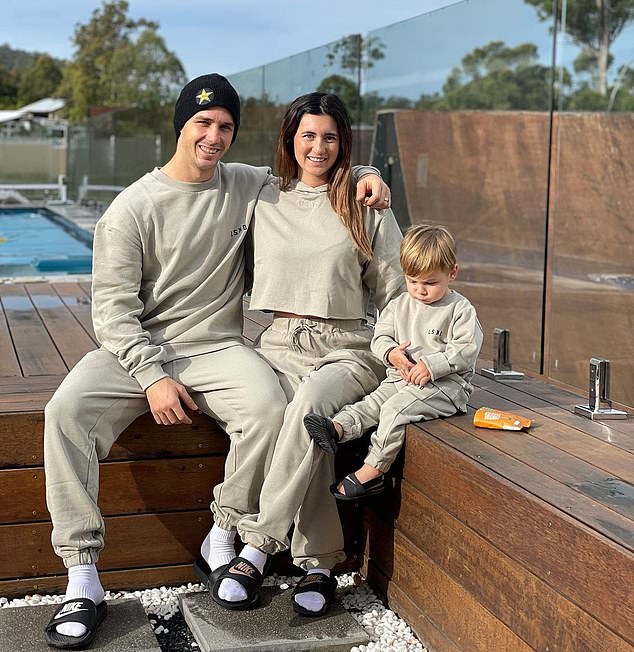 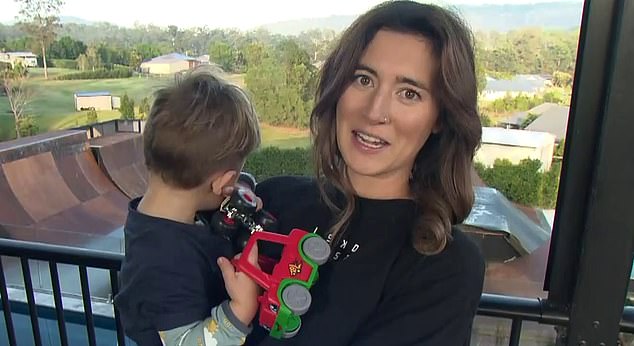 Wife Kim (pictured) appeared on the Today show on Monday to talk about Martin’s Olympics victory, but the couple’s son Noah stole the show by interrupting the discussion in a bid for attention

Stefanovic suggested it must be a tough sacrifice for the young family, missing out on time together as Martin is overseas competing.

While Noah misses his dad, Kim, who is pregnant with their second child, said they are faring better this time around compared to Martin’s last trip a few months ago when was struggling with morning sickness.

But she said it was ‘amazing’ to watch her husband take out the medal over the weekend.

‘I think everyone here was just crying and cheering. It was a moment that will never been forgotten,’ she said.

After taking out gold, Martin said he hoped the win would ease tensions with his  neighbours back home, who were not impressed by the scaled-down skate park in his backyard.

A lack of local training facilities had meant Martin either had to build his own facility, which cost about $70,000, or head overseas.

‘A few of my close neighbours weren’t too keen on the idea,’ he told the Seven Network.

‘This obviously paid off and I hope they see it paid off, too.

‘It’s a crazy feeling I guess to set out on this goal, invest so much money into this goal and to walk away with the gold medal. It’s the cherry on top for me, it just tops my career, all my career achievements.’ 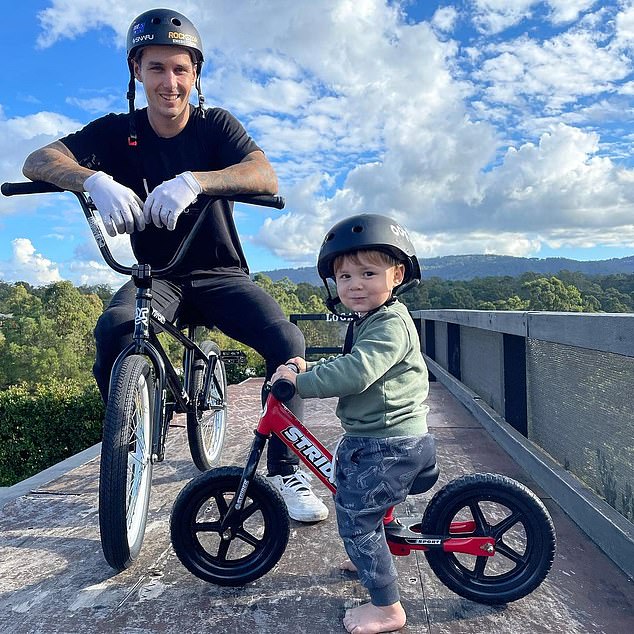 Martin (pictured with his son) scored 93.30, and making history as the first ever gold medalist as the sport made its debut

Stefanovic asked Kim whether taking out the gold had placed the couple back in their neighbours good books.

‘They’ve definitely come around from when we first let them know [our building plans],’ she said.

‘You know, it’s a bit of unknown territory to people, so when you say you are building a skate park in your backyard, it is not a positive thing that comes to mind.

But appearing on Sunrise later that morning, Martin implied the relationship was yet to be completely smoothed over.

When host Natalie Barr suggested the Martins invite the neighbours over for a BBQ as thanks for allowing the untraditional backyard infrastructure, the BMX rider awkwardly did not respond to the statement.

None of the other eight competitors could match Martin’s array of aerial tricks, with the Australian later revealing Sunday’s dominant first round was a safety run.

Martin, who won his second world title in June, had more tricks ready should they be needed, but he already had the gold medal secured when he was the last starter in the second run. 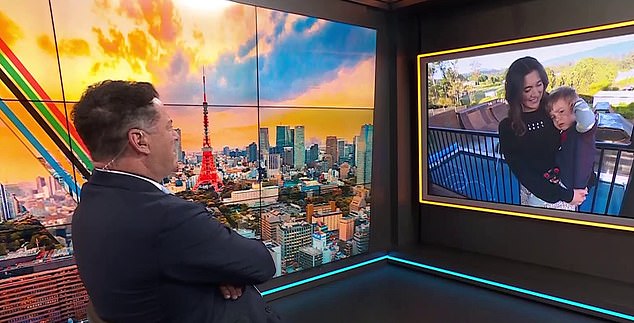 The Australian executed a bold no-hands front flip at the start of his victory run, but then abandoned when his foot slipped.

No Australian had won a gold in Olympic men’s cycling since 2004.

Martin was the only competitor to score more than 90 in Saturday’s two seeding runs, confirming he was the man to beat.

On Sunday it came down to Japan’s Rim Nakamura, who comes from a strong cycling family and is even named after a bike part.

With local fans lining a nearby bridge in their thousands to cheer him on, Nakamura made a strong start to his second run at Ariake Sports Park but faded late for a score of 85.10.

That confirmed Martin, the last man to compete, as the gold medallist.

Daniel Dhers of Venezuela, at 36 the veteran in the men’s competition, won silver with 92.05 on his second run and British rider Declan Brooks scored 90.80 for the bronze.

Australia should have had two medal contenders in the men’s event, but former world champion Brandon Loupos badly injured his knee at the June world championships and needed a reconstruction.