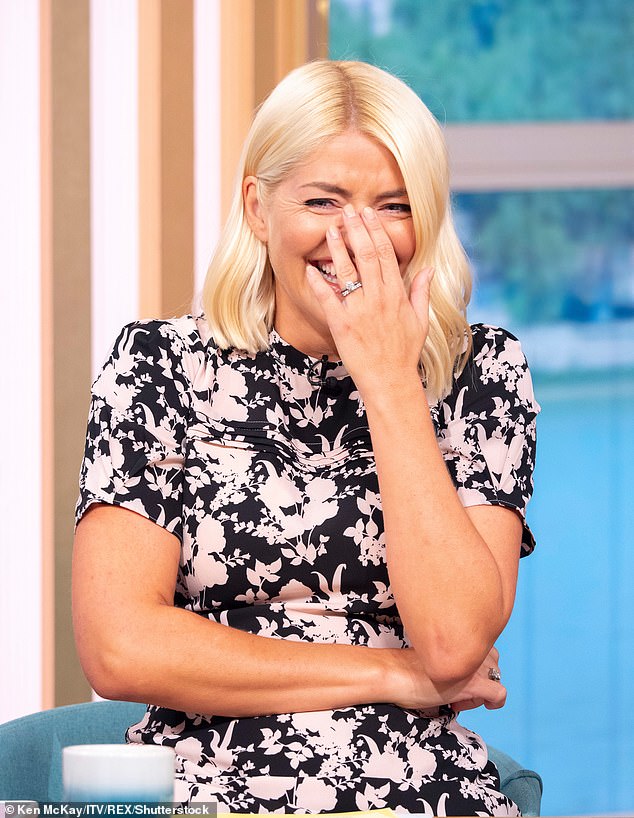 ‘History will be kind to me,’ said Winston Churchill, ‘for I intend to write it.’

In similar vein, I plan to pen a posthumous volume of diaries, to be published immediately after I leave the world, saying what I really think about everyone.

‘Are you OK?’ asked a panicky Holly Willoughby. ‘I’ve been asked to record an obit message about you?’ ‘It’s a fake,’ I chuckled. ‘Out of interest, what would you have said in your tribute?’ ‘I’d have said you were a wonderfully beloved part of the ITV daytime family who will be sorely missed,’ Holly replied, ‘and that I’m available to take over presenting Life Stories’

Of course, the main purpose of this tome will be to get in first before the torrent of jubilant vitriol inevitably pours in from my many gleeful adversaries.

Oddly, as I amused myself this week by pondering exactly who I’d take down from beyond the grave, I began receiving a flurry of messages from famous friends, including Susanna Reid, Kevin Pietersen and Holly Willoughby, worried that my departure from Planet Earth might be more imminent than I would like.

It transpired that some pranksters have been firing off requests for ‘advanced obituary tributes’ about me, supposedly for ITN.

‘These interviews are taped and edited now,’ the very professionally created invitation reads, ‘so that they can be broadcast immediately in the event of the subject’s passing. As you can imagine, it’s rather a sensitive area so we’d respectfully ask that you keep this request confidential.’

Fortunately, my friends’ concern for my health marginally outweighed their natural craving to be on camera, or at least it did for the ones I know about.

‘Are you OK?’ asked a panicky Holly. ‘I’ve been asked to record an obit message about you?’

‘It’s a fake,’ I chuckled. ‘Out of interest, what would you have said in your tribute?’

‘I’d have said you were a wonderfully beloved part of the ITV daytime family who will be sorely missed,’ Holly replied, ‘and that I’m available to take over presenting Life Stories.’

The furore over Diversity’s performance on Britain’s Got Talent makes me sick.

The young, talented, hard-working, humble and dynamic dance group, led by the brilliant Ashley Banjo, were one of my favourite acts when I was a judge on BGT (they won the third series).

They epitomised the spirit of the show and I’ve watched with great pride as they’ve gone on to achieve huge success.

Now they’re at the centre of a pathetic firestorm after performing a stunningly powerful routine on BGT that depicted the huge events which have rocked the world this year, from the pandemic to George Floyd’s death at the knee of a police officer.

I loved it, but more than 20,000 viewers complained to TV regulator Ofcom that it was ‘inappropriate’ – and the troupe’s members have been bombarded with disgusting racist abuse. Ashley responded by posting this quote from Martin Luther King Jr: ‘Our lives begin to end the day we become silent about things that matter.’

To which I would simply add: if you were more outraged by Diversity’s performance than you were by what happened to George Floyd, then you’re the problem, not them.

An update in my ongoing 12-year battle to persuade Sir Michael Caine to do Life Stories.

When I bumped into the great man several weeks ago, he promised to watch my interview with another national treasure, Captain Sir Tom Moore, and if he liked what he saw, he’d ‘possibly’ do the show.

And he really enjoyed it.

And he’s kept his word and agreed to now appear on it too.

There’s just one problem… ‘He saw and loved it,’ said his agent, ‘and said he also wants to wait until he is 100 to do his one.’

I’ve been voted the celebrity the British public would least like to live next to – beating the likes of Gemma Collins, Boris Johnson, Dominic Cummings, Liam Gallagher and Jeremy Clarkson in a survey by charity fundraising platform, Omaze. Apparently, along with Meghan and Harry, I’m people’s idea of the worst ‘nightmare neighbour’, which I can only presume is because they think I’d be the same noisy, argumentative, confrontational person that I am on Good Morning Britain. But in fact, when at home, I like to think I’m a very quiet, discreet, helpful-when-needed neighbour.

Except when Arsenal lose. That’s not a good time to pop round for a bag of sugar.

On a happier note, I’ve been shortlisted for ‘Favourite Presenter’ in the TV Times Awards. However, my five rivals include those insufferable trophy-guzzlers Ant and Dec, so obviously I have more chance of becoming Pope.

Stars who lose awards usually say: ‘It’s not the winning that matters, it’s being nominated!’ But speaking as someone who has lost virtually every single award for which I’ve ever been nominated – usually to Ant and Dec – that’s the biggest lie in showbiz, after ‘I haven’t had any work done’.

Of course, it’s the winning that matters.

And I’ve had enough: if those snivelling, smug Geordie b******* beat me again, they’ll be having their next Saturday Night Takeaway from a tube.

‘It was an anxious time for everybody,’ Susanna’s told Stella magazine, ‘those early days were very frightening. I started to have really vivid, terrifying nightmares where I would wake up screaming and crying.’ GMB’s staff were surprised to learn this referred to Covid-19, not my joining the programme.

Watching Boris Johnson disintegrating into a blustering, blathering, bulls******* clown during the greatest crisis of my lifetime has been an unsettling spectacle, and even usually supportive media friends are now openly mocking his woeful leadership.

We can’t say we weren’t warned.

When I interviewed Boris for GQ magazine back in 2007, I put the following statement to him: ‘I don’t really buy into this buffoon act. I think you play it all up to make money and charm the public, when underneath it all lurks a calculating, ambitious and very serious brain.’ ‘That’s very kind of you Piers,’ he replied, ‘but you must consider the possibility that underneath it all there really may lurk a genuine buffoon.’