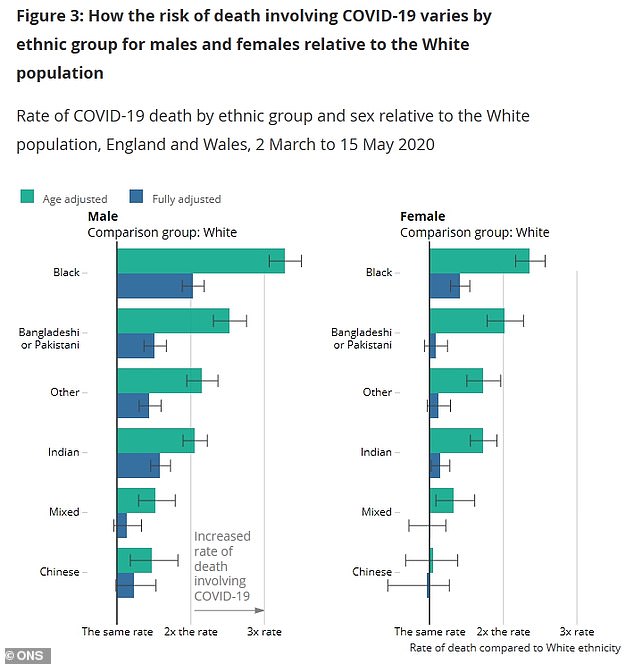 Almost 60,000 more coronavirus deaths could have occurred in England and Wales if white people faced the same risk as black people, a damning report has claimed.

Data has shown black people are two-and-a-half times more likely to die from Covid-19 than whites, according to the Office for National Statistics.

The Institute for Public Policy Research (IPPR) and Runnymede Trust said this is because black people face inequalities that leave them more exposed and vulnerable to the disease.

These include unequal social conditions, such as public-facing jobs that force them to interact with strangers more often and crowded housing, where social distancing is impossible. Minorities also face unequal access to healthcare, and structural and institutional racism, according to the report.

Its authors called for ethnicity to be considered a risk factor when deciding who should be prioritised for Covid-19 tests alongside age, gender, occupation and underlying health conditions.

The report by the IPPR said 35,000 more could have died if white people faced the same risk as the South Asian population, who’re statistically one-and-a-half times more likely to succumb to Covid-19 than white people.

White people are at a lower risk of dying from coronavirus than other ethnic groups in the UK, says ONS. Black males are 3.3 times more likely to succumb to the disease than white males

This graph, built using ONS data, shows the risk of death when comorbidities such as type 2 diabetes and deprivation are controlled for in the sample

Black people are almost twice as likely to die from Covid-19 as white people, according to a study that adds to growing evidence on the subject.

Numerous reports, including government-funded research, have shown people in black, Asian and ethnic minority (BAME) communities are being hit harder by coronavirus.

The latest review of evidence published at the start of this month and commissioned by London Mayor Sadiq Khan, adds to the fire.

Manchester University academics, who carried out the research, found black people were 1.9 times more likely to die from Covid-19 than white people. They analysed the data from both local and national sources to make the conclusion.

And the effect was still found even when they took into account that non-white people tend to, on average, have worse health and living conditions.

Experts believe BAME communities have been hit harder by Covid-19 because ethnic minorities are more likely to be poorer and therefore in worse health, and more likely to work in public-facing jobs — leaving them vulnerable to catching the illness.

The new report for Mr Khan made the same two conclusions, and it pointed out that a disproportionate number of BAME people work in risky jobs in the NHS and care homes.

The report suggests more than 2,500 deaths of black people could have been prevented if they did not have this extra risk – or an extra 58,000 deaths could have occurred if white people had the same level of risk.

It also suggests that the prevalence of underlying conditions, such as lung disease, obesity and diabetes, account for only a very small part of ethnic groups’ increased risk.

The think-tanks believe the main factors are most likely to be unequal social conditions, such as jobs and housing, unequal access to healthcare, and structural and institutional racism.

This is backed up by recent ONS figures, which suggest the increased risk cannot be fully explained by pre-existing health conditions and is most strongly linked to socio-economic factors.

Overcrowding is believed to play a part, with Government figures showing nearly one in three Bangladeshi families live in overcrowded housing, compared to 15 per cent of black African households and 2 per cent of white British households.

People from ethnic minority communities were 18 per cent less likely to be aware of the Government’s ‘stay at home’ messaging, the Runnymede Trust said, suggesting a flaw in communication.

The think-tanks want temporary accommodation offered to people who need to self-isolate but cannot due to their living situation.

Financial support for those self-isolating should be available to all, including those without a settled immigration status, and clearer messaging should be targeted at vulnerable populations encouraging them to seek healthcare.

Parth Patel, IPPR research fellow and lead author of the report, said little has been done to combat the unequal impacts of the pandemic, months after they became apparent.

He said: ‘We cannot eliminate all the effects of structural and institutional racism overnight.

‘But we can and should take practical steps now to better protect minority ethnic communities, to support people to self-isolate and to ensure healthcare access is less unequal in the dangerous winter months that lie ahead.’

Dr Halima Begum, Runnymede Trust director, said ‘there can be no justification’ for the 58,000 projection, adding: ‘If that figure does not give the Government cause to sit up, listen and take action, I don’t know what will.’

She said: ‘I am repeatedly asked if Covid-19 is a “racist disease”. It is not. But it prevails in a society that is riddled with structural inequalities whose roots are firmly entrenched in race and ethnicity.

‘As we head into what promises to be a long, challenging winter, we cannot ignore these inequalities any longer. For the Government to do so would be to condemn thousands more black and ethnic minority people to a needless death.’ 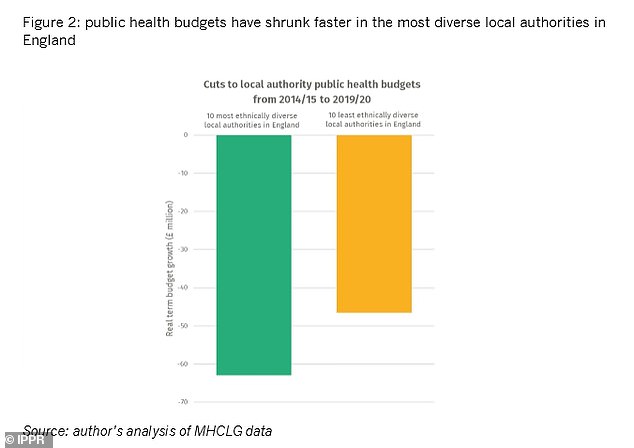 There have been heightened cuts to public health budgets in more ethnically diverse communities, driving down the quality of services available 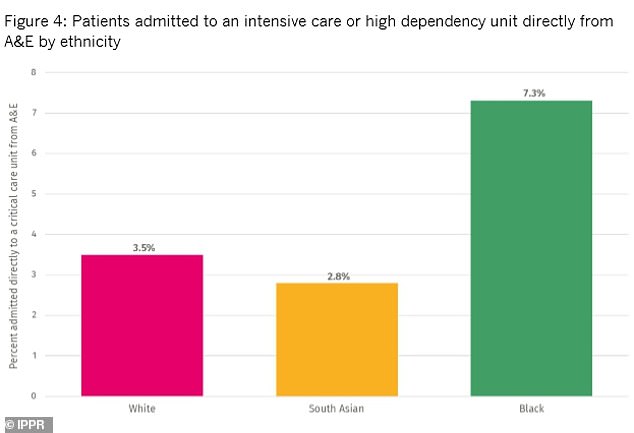 This graph shows 7.3 per cent of people admitted to intensive care from A&E are Black, while 3.5 per cent are white and 2.8 per cent are Asian

The Government has prioritised coronavirus tests by professions after the system was overwhelmed when children returned to school at the beginning of the Autumn term.

Hospital patients have first priority, followed by care home residents and staff, NHS staff, those in outbreak and surveillance studies, and teachers.

The UK completed more than 300,000 tests yesterday, still some way off the fast-approaching target of 500,000 a day by the end of this month.

Previous research has found Black and Asian people are more likely to die from coronavirus because they tend to live in poorer settings, and have public facing jobs – where the risk of catching the disease is higher.

Manchester Academics said in a report published at the start of this month, commissioned by Sadiq Khan, that Black people are almost twice as likely to die from the virus after analysing data from both local and national sources.

A study published on September 24 found BAME people are not genetically more at risk from the virus, suggesting instead the death rate is down to other factors.

The Public Health England researchers said BAME people are two to three times more likely to die from the virus than other members of the population after analysing NHS data.

They said pre-existing medical conditions and environmental factors are more likely to blame for the heightened risk.