By Mark Shapland For The Daily Mail

The tech firm’s founder and chief executive, Will Shu, had been looking at listing its shares in New York.

But in a major boost for Brexit Britain, the Mail understands that the £5billion company will list in London in the coming months.

Tech float: In a major boost for Brexit Britain, the Mail understands Deliveroo will list in London in the coming months

Deliveroo yesterday hired Next boss Simon Wolfson as a non-executive director as it beefed up its board ahead of the float.

Shu felt that the company could command a higher valuation in the US, where there is a bigger tech scene. But financial advisers made the case that the customer base is in Europe, not the US.

The decision marks a big win for London as the Square Mile tries to reinvent itself after Brexit. Chancellor Rishi Sunak has vowed to make the UK the best place to list in the world and has looked at slashing regulations to make that happen.

It is hoped that Deliveroo’s decision will spur other tech firms to follow, with chip designer Graphcore and cyber security firm Darktrace also working on plans to list.

Deliveroo is expected to float in 2021, although no firm date has been set.

It has hired bankers Goldman Sachs and JP Morgan to work on the project, as well as London broker Numis.

With Next chief executive Wolfson on the board, it now has a second high-profile member –former Premier League director Claudia Arney became the company’s first chairman in November. 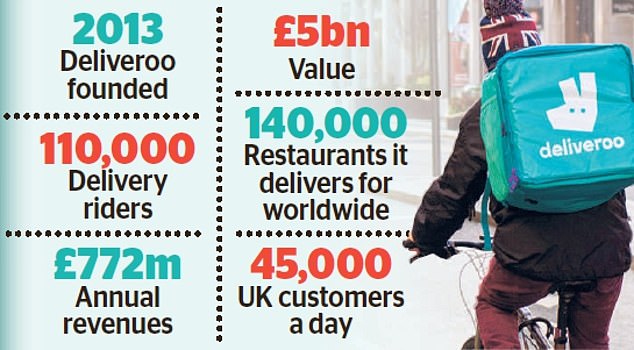 Wolfson has been boss of Next since 2001 and is the FTSE 100’s longest-serving chief executive. Next shares fell 1.4 per cent yesterday amid fears he could leave.

Shu said: ‘Simon will bring great knowledge and insight and help us in our mission to become the definitive food company. We are excited about his appointment.

‘We are looking forward to working with him as we continue to innovate, developing new tech tools to support restaurants, to provide riders with more work and to extend choice for customers, bringing them the food they love from more restaurants than ever before.’

Wolfson said: ‘I am delighted to be taking up this role. Deliveroo is an exciting, innovative and fast-growing company that, like Next, relies on advanced technology to deliver a market-leading proposition.

‘I look forward to working with the talented leadership team on the many opportunities ahead.’

Over the weekend Deliveroo’s valuation touched £5billion after it secured £132million in fresh funding, which was led by investors Durable Capital Partners and Fidelity Management.

The valuation is almost double its 2019 price tag, when Deliveroo raised £420million from investors including Amazon, which has a 16 per cent stake.

Deliveroo had a stellar 2020 when consumers turned to the takeaway app as restaurants and pubs shut due to lockdown.