By Marcus Townend for the Daily Mail

Hollie Doyle took Day One of Glorious Goodwood by storm with a 123-1 treble topped off by the most valuable win of her soaring career on Trueshan in the Group One Al Shaqab Goodwood Cup.

It was the second top level victory for Doyle, who was also successful yesterday on Lord Riddiford in the Back To Goodwood Handicap and Sisters In The Sky in the British Stallions Maiden Stakes, following on from her win on Glen Shiel in the Champion Sprint at Ascot last October.

That was a 16-1 surprise but Doyle had added pressure with Trueshan, who also gave trainer Alan King his first Group One winner on the Flat, being sent off 6-5 favourite after Stradivarius was pulled out because of heavy ground.

Trueshan even traded at odds-on in the final minutes before the race. The five-year-old did not settle well early in the race but ultimately won as his odds suggested he would, storming away in the final furlong to win by three-and-three-quarter lengths from Away He Goes.

Doyle, 24, said: ‘I got some buzz out of that. I don’t get too high or too low but when you have an experience like that you have to make the most of it.

‘It is one of the best days I have ever had. When I got a taste of success on Champions Day last year I got hungry and wanted it to happen more often. I never feel pressure or nervous but there was something hanging over me today. I didn’t want to let anyone down.’

Trueshan’s win was also a landmark moment on the Flat for King, who has 31 top-level wins over jumps. His 15 successes at the Cheltenham Festival include Kachit in the 2008 Champion Hurdle. 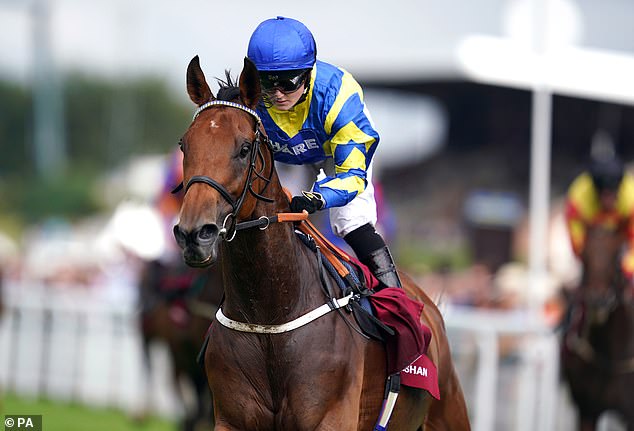 King, who will aim Trueshan at the Prix Du Cadran at Longchamp on Arc day in October, said: ‘This is very special and up there with the Champion Hurdle.’

Stradivarius was scratched after overnight rain turned the going officially heavy. Trainer John Gosden feared the race would turn into an unsuitable slogging match for the four-time race winner. He will now be aimed at the Lonsdale Cup at York’s Ebor meeting next month.

Goodwood Cup third Sir Ron Priestley pulled up lame after the line with a suspensory ligament injury in his right foreleg.