Love Island‘s Lucinda Strafford reunited with her villa ex Brad McClelland on a night out in Brighton on Saturday – days after revealing her romance with Aaron Francis was over.

Lucinda, 21, who was briefly coupled up with Brad, 26, before he chose to sacrifice himself so she could continue on the show, looked delighted to be reunited with the hunk as they held hands while walking down the street.

Lucinda put on a leggy display in a cream mini dress, paired with strappy heels as she laughed in the street.

On again? Love Island’s Lucinda Strafford reunited with her villa ex Brad McClelland on a night out in Brighton on Saturday – days after revealing her romance with Aaron Francis was over

She bundled up in a furry jacket and wore her tresses in soft waves.

Brad, who has previously said he would keep the door open on his and ‘Cind’s’ romance, wore a black tee and jeans as he held the blonde’s hand.

Brad previously admitted that he has spoken to Lucinda, but is unable to meet up with her due to the fact she’s quarantining.

The Northumberland star also revealed that he has spoken to Aaron. 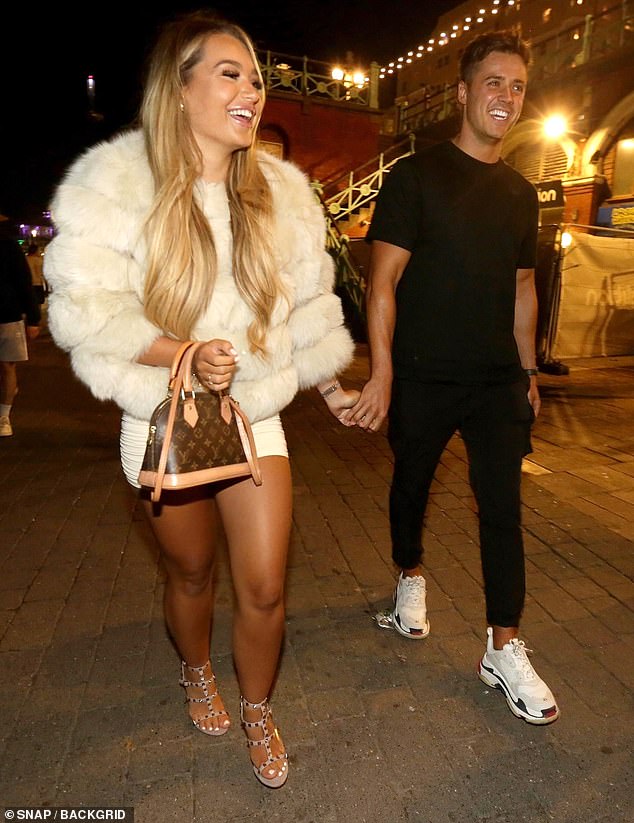 Aaron who? Lucinda, 21, who was briefly coupled up with Brad, 24, before he chose to sacrifice himself so she could continue on the show, looked delighted to be reunited with the hunk as they held hands while walking down the street

On the latest episode of heat’s Under The Duvet with VOXI, Brad was asked his thoughts on the rumours of Lucinda rekindling her relationship with her footballer ex-boyfriend Aaron Connelly before going onto the show.

‘I think that’s a load of s**t to be fair, I don’t know the gospel on it but from what I’ve heard, that’s not true,’ he responded.

He was quick to jump to her defence, adding: ‘She spoke about him to be in there and she said ex to me. You know what, people are going to say things and any opportunity they’ve got they’re going to stir it up.’

This comes days after Lucinda said her romance with Love Island co-star Aaron is already over, 72 hours after they were dumped from the villa.

Lucinda admitted she ‘didn’t find love’ during her three-weeks on the ITV2 show and admits herself and Aaron, 24, have agreed to remain ‘really good friends.’

In her first interview since landing back in the UK, Lucinda also denied claims she was dating Brighton footballer Aaron Connolly, 21, during her time on the series, laughing off reports he drove her to the airport before she flew to Mallorca. 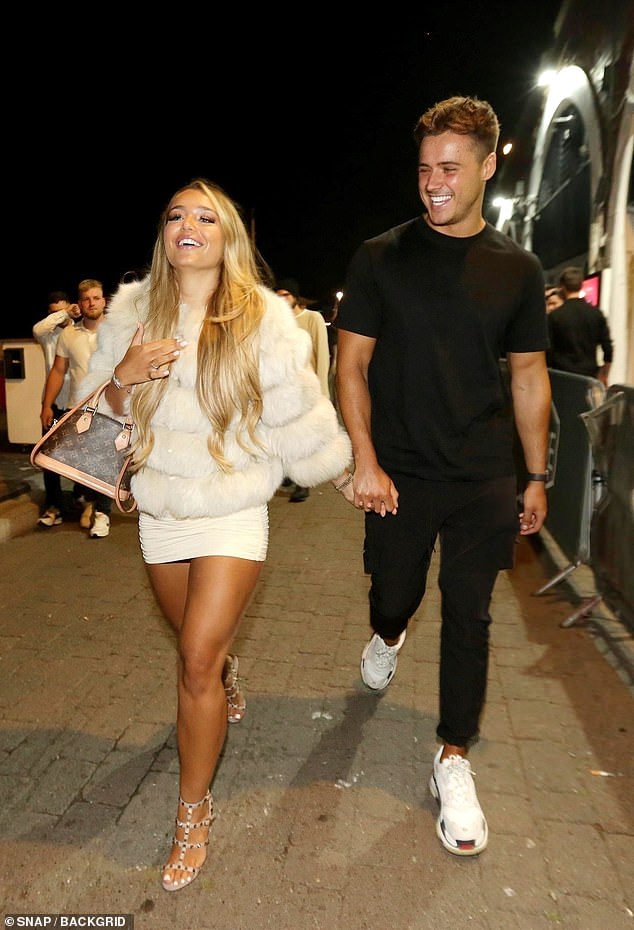 Good to see you: Lucinda put on a leggy display in a cream mini dress, paired with strappy heels as she laughed in the street 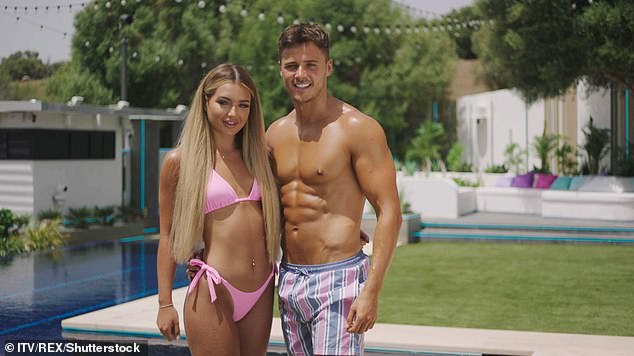 Gesture: The labourer made the selfless decision to leave the villa a few weeks ago following a tough choice (pictured above with Lucinda)

Lucinda told MailOnline: ‘Unfortunately, both of us didn’t find actual love in the villa. We’re great friends, I know that I can come to him for anything. The aim of the game is to find love and I did really want to… I made amazing friends in there.

‘We’ll definitely meet up, but whether it’s a date… we’re unsure what’s going to happen romantically between us, because we haven’t been able to properly see each other, and we’re both going to be busy because we have busy schedules going on so, if it’s not romantically we’ll be really good friends.

‘It was weird, Aaron and I were at the airport, and we were like, we don’t even have each other’s numbers. We were hugging goodbye and thought we need to exchange numbers.

‘We’ve kept in contact, we’re both in isolation, and there has been a couple of messages here and there. We did like each other in the villa, which was quite obvious, but we were only coupled up for a few days. It’s so crazy to think I was in there for almost three weeks, I feel like I blinked, and it was over.’ 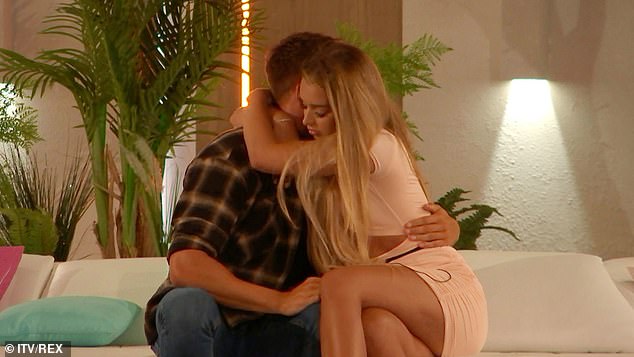 Thoughtful: The pair said an emotional farewell just days before Lucinda cracked on with Aaron 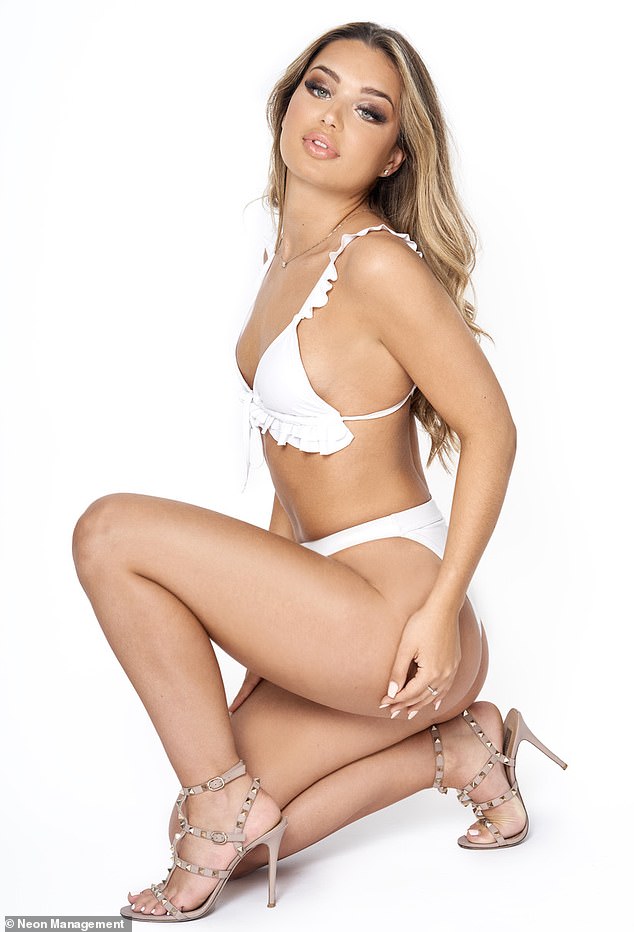 ‘I am completely and utterly single’:This comes days after Lucinda said her romance with Love Island co-star Aaron is already over, 72 hours after they were dumped from the villa

Lucinda, who was booted off Love Island earlier this month, insists she was single throughout her time on the show, and denies claims she ‘reconciled’ with ex-boyfriend Aaron who was reportedly dog-sitting her pug.

According to Lucinda, her relationship with the footballer ended four months ago and he had no idea she was going on Love Island.

She said: ‘I am completely and utterly single. Never in a million years would I go on Love Island if I was in a relationship, and I’m sure if I had a boyfriend, he wouldn’t be very happy with it either. 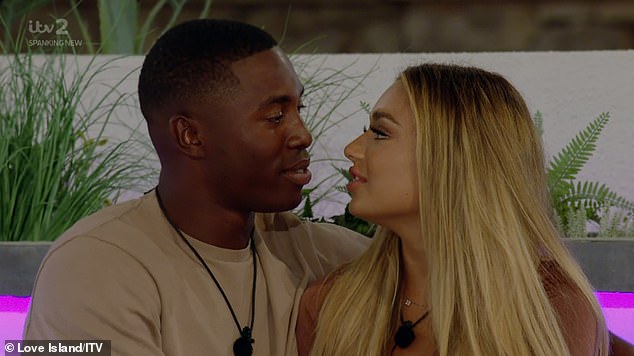 ‘We were only coupled up a few days’: Lucinda admitted she ‘didn’t find love’ during her three-weeks on the show and admits herself and Aaron (pictured) have agreed to remain ‘friends’

‘We ended quite dramatically at the start of March but then we made friends, and we share a dog, it’s a shared dog and he’s been looking after it.

‘It was at my mum’s house and my mum couldn’t look after three dogs, so it seemed right, he was looking after it. We broke up quite a while ago now, but the ship has definitely sailed between him and me.

‘He had no idea I was going on Love Island, and it was a shock to him. Apparently, he drove me to the airport, which is a complete and utter lie, I got a taxi. Hopefully, he’s moved on and I definitely have. It was a funny rumour!’

The fashion boutique owner, from Brighton, received the fewest votes from the public while coupled up with love interest Brad.

Lucinda hinted at a possible reunion between herself and Brad, after the labourer wasted no time in messaging her following her villa exit.

She said: ‘I have been in contact with Brad, he messaged me saying ‘well done’, and he’s so lovely. I’m sure we will meet up. There are absolutely no hard feelings between Brad and me. It was genuinely so upsetting when he left the villa, he was part of the furniture. I like that we’re still in contact.

‘He left and no one was expecting it, it was awful. Brad and I were quite close; however, we only knew each other for a week and coupled up for a few days. Obviously, we liked each other but I had to think to myself ‘don’t make any rash decisions’, I was thinking should I leave? Should I not?

I spoke to a couple of girls in there and they said to sit on it for a couple of days, it was very, very early stages to tell if he was The One. It would have been daft after that short period of time. Of course, I was upset but I didn’t know where it was going to go with him.

Lucinda was shocked to discover viewers believed she only went on Love Island to land deals with the likes of online clothing brand Pretty Little Thing, and achieve the same level of success as influencer, Molly-Mae Hague, 22.

She insists she was happy with her life before landing a spot on the show, but also refuses to turn down any lucrative job opportunities that may now come her way.

‘It makes me really upset. I wasn’t expecting to come back and see all of that’, Lucinda said.

‘I genuinely did want to find boyfriend and unfortunately I didn’t. Obviously, that’s not the reason I would go on a show like that. I was happy with my business; my life before and I wouldn’t need to go on a show for that reason.

‘I am worried about people’s reactions now but at the same time if opportunities do come my way it would be silly for me to say no due to some people’s opinions. I know none of the other girls would say no to it and just because I’ve had a bit of hate, I don’t think I should say no either.

‘This Pretty Little Thing, thing, is hilarious. I don’t know why everyone is so connected to that one brand. People have a lot to say about different things and they can if they want but I’m not going to let it get to me. 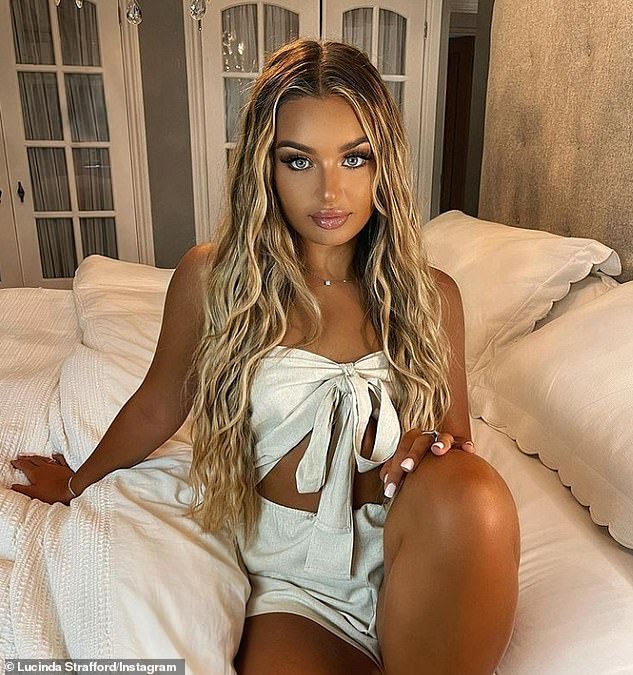 ‘It would be silly to say no’: The Islander insists she was happy with her life before landing a spot on the show, but also refuses to turn down any lucrative job opportunities that may now come her way