Question: My nose runs non-stop. The mucus is clear and sometimes there’s a salty taste at the back of my throat. Is there anything I can do or take to dry it?

Answer: Your symptoms are most likely due to allergic rhinitis, a very common condition that affects around one in five people.

It is caused by the immune system overreacting to a harmless allergen — this could be anything from dust to perfume. As a result, the cells in the lining of the nose become inflamed and produce too much mucus, leading to cold-like symptoms such as sneezing, congestion, or, as in your case, a runny nose.

For most people, dust mites, feathers in bedding or cushions, the fur of pets, and various moulds and spores are the culprits for a streaming nose (file image)

It can also trigger an itchy nose or throat and itchy, watery eyes. All these symptoms have a purpose — it is the body’s way of trying to dislodge the allergen.

In some cases, the condition is merely a minor irritation, but severe symptoms can affect sleep, concentration and energy levels, so it can have a significant impact on quality of life.

Perhaps the best-known form of allergic rhinitis is hay fever, where pollen from trees or grass causes problems for months at a time.

Your symptoms, however, occur year-round, so I suspect you have chronic perennial allergic rhinitis. ‘Perennial’ simply means your symptoms aren’t seasonal but triggered by something that is constantly in your environment.

For most people, dust mites, feathers in bedding or cushions, the fur of pets, and various moulds and spores are the culprits.

In your case, the answer may lie in your work. You say in your longer letter that you work on a farm, and this is an environment where you may be exposed to animals, hay, and all manner of other potential allergens.

I suggest you ask your pharmacist for beclomethasone (brand names include Beconase), a corticosteroid spray that is available without prescription. Taken as directed — normally two puffs in each nostril twice a day — it eases symptoms by reducing the inflammation in the lining of the nose.

This is the mildest of steroids, but in some people the nose gets over dry and nosebleeds may occur. 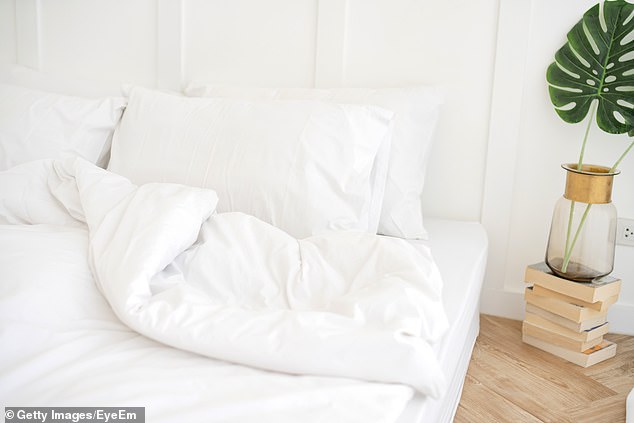 Allergy-proof covers for pillows, duvets and mattresses, for instance, might help people who are sensitive to dust mites, while an allergy to a pet cat might be eased by not allowing the animal to sleep in the bedroom

If your symptoms haven’t improved after a month, consult your pharmacist again and ask about using either cetirizine or loratadine, then take one of these each morning while continuing to use the nasal spray.

These drugs are antihistamines — histamines are substances produced by the body during an allergic reaction that trigger the symptoms — and work as a preventative as well as a treatment. Again, no prescription is needed.

If you find one of these strategies is effective, it confirms that your symptoms are indeed due to an allergy and you will need to remain on the treatment indefinitely.

Of course, it makes sense to try to avoid the allergens that trigger symptoms, too. Allergy-proof covers for pillows, duvets and mattresses, for instance, might help people who are sensitive to dust mites, while an allergy to a pet cat might be eased by not allowing the animal to sleep in the bedroom.

However, I appreciate it can be harder to avoid exposure to allergens that are part and parcel of your working life.

If your symptoms remain despite these treatments, then you most likely have non-allergic rhinitis — inflammation of the lining of the nose that isn’t caused by an allergy. This less common diagnosis can be confirmed by an ear, nose and throat specialist — your GP can refer you.

Some patients with non-allergic rhinitis, particularly older men, respond well to long-term use of a nasal spray called ipratropium bromide. Rather than reducing inflammation in the nose, it reduces the amount of mucus produced.

Whatever the diagnosis, I am hopeful that one of the above treatments will prove effective for you and abolish this miserable, long-lasting complaint.

In my view… GPs need to learn end-of-life skills

Palliative care has been an important part of my life ever since I was a medical student shadowing a GP who took me on his house calls each day.

Often there were poignant visits to patients who were in the last days of their lives, where my mentor would help to support carers, liaise with district nurses, oversee medication and, most importantly of all, give comfort.

Replies should be taken in a general context and always consult a GP with any health worries.

Most of the time they were patients he had known for many years, and he was their expert medical friend, as well as a vital source of support.

Obviously, death does not respect office hours and my mentor was available day and night for any crisis of pain management, or the eventual demise of the patient, which so often seemed to be in the darkest hour before dawn.

Little did I realise that palliative care would become such a large part of my life, as both the medical director of a hospice and a GP in a practice devoted to enabling patients to die at home, if it is their wish or the wish of their loved ones.

Today, many terminally ill patients still express a desire to spend their last days surrounded by their loved ones at home, yet many are being denied this wish, with surveys by Macmillan Cancer Support showing that almost three-quarters of cancer patients who died in hospital had wanted to be in their own homes.

Local hospices provide vital home support, but heavy workloads and, I suspect, lack of training and experience in this area mean GPs are less involved than they were in the past.

Making formal palliative care training a mandatory part of the education of future family doctors would help ensure more people get the sort of peaceful, dignified death they deserve.